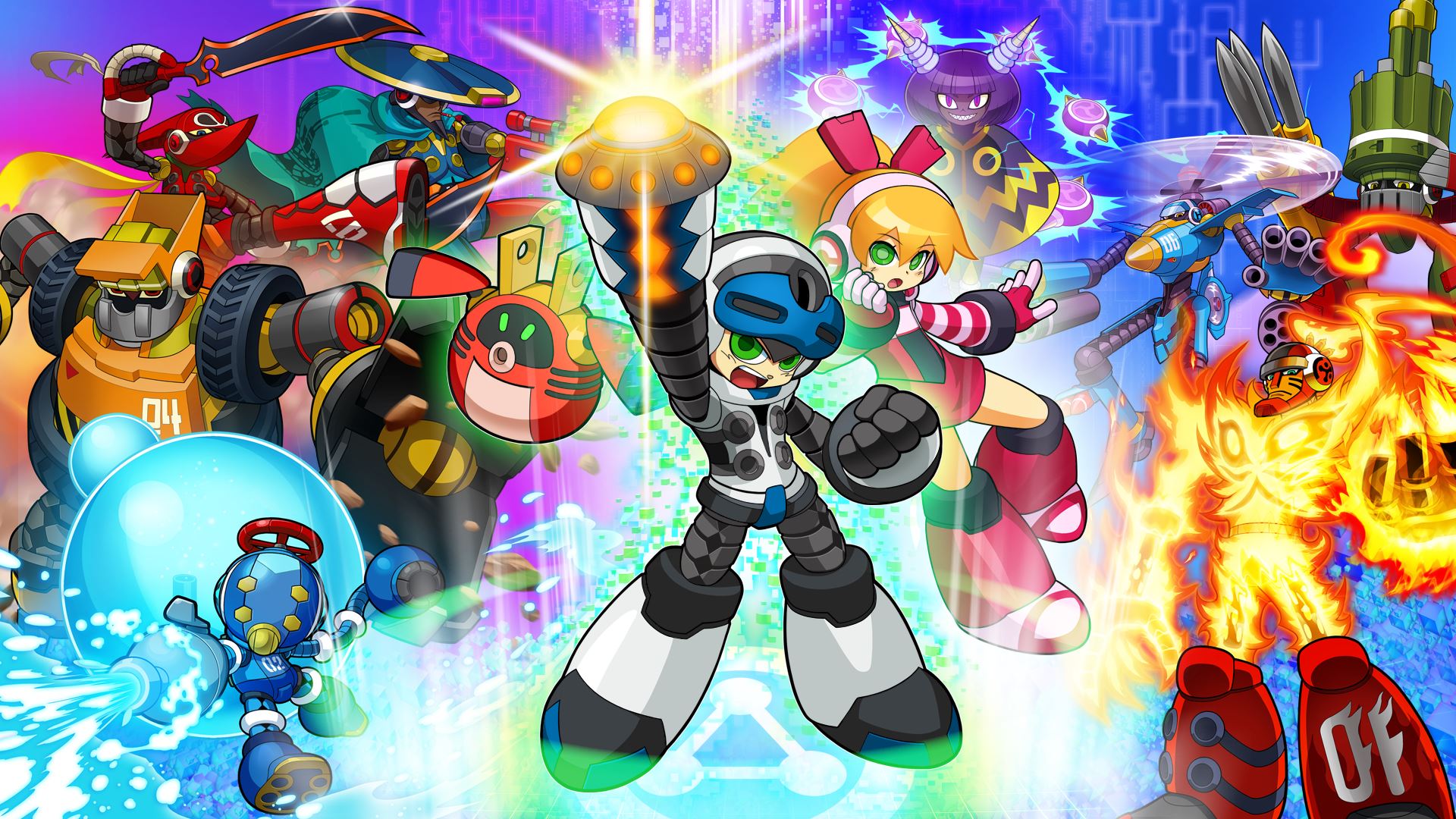 You’ve heard enough about the drama surrounding Mighty No. 9.

Let’s take a look at the actual, finished product.

My opinion of Mighty No. 9‘s gameplay hasn’t changed much since my time with the demo many moons ago. You get used to the systems Inafune and his team have put in, especially boosting, which is used to “absorb” enemies after dealing damage with your arm cannon shots. The combo system (granting players chains if they absorb foes faster) isn’t nearly as cool as Comcept and Inti Creates think it is, but it works because it encourages smart and swift play. I adore the idea of adsorbing powers (like speed, power shots, and armor — which you can cleverly see above your avatar here) temporarily, and having to stay on top of things constantly to have the edge. It keeps things fresh, and in no time, you’ll start to identify enemies with specific powers like a sixth sense.

Because damn, if you can ignore the look of the lackluster engine, it plays well. One can quick dash in and out of the action, and at times the sheer magnitude of your power to traverse terrain can feel like an iconic Mario power-up. You’ll need to really get a hold on everything too, because Mighty can get pretty difficult. There are several stages with outright insta-kill sections, with few and far between checkpoints. That’s only going to frustrate the audience that didn’t grow up in the era of NES and SNES platformers, but I appreciate that Mighty, after all this waiting around for it, isn’t a remedial experience.

There’s a lot of skill involved even if you completely eliminate the intricacies of each boss weapon, which can be acquired Mega Man-style after defeating them. The idea of “pre-charging,” as I call it, into an enemy as your bullets are racing across the screen to absorb them at the last possible second is key in many areas, as is the use of the “Action Shifts” (which allow for higher jumps or backwards shots). I’ve seen a lot of videos recently where players are getting hit by seemingly impossible to dodge attacks, not using Shifts, and it really highlights how much depth there is to discover. Earning E-Tanks (AcXel Recover) in real time while you’re playing each level (and having them go back to zero if you die) is another nice touch.

But all of this excellent gameplay design is only as good as the scenery you’re playing it in, and sadly, most of Mighty‘s levels are too by-the-book. Outside of the Countershade stage, where players are chasing down a sniper robot through a looping Capital building (essentially morphing the entire level into a boss fight itself), pretty much everything else gives off that been there, done that feel — whether it’s in Inafune’s own games or more recent platforms. It’s not just Countershade though — these “Robot Masters” are a little too cool for the levels they inhabit (though the intro, mid, and final bosses are painfully boring). I love Dynatron (the electric girl) and her amazing battle, but her level feels like a neutered take on Flame Mammoth’s stage in Mega Man X, with less room to explore and more pipes getting in the way.  The lackluster aesthetic also takes away from everything in the most distracting way possible.

Let’s do an exercise, and I want you to to really take a look at how beautiful the artwork of this game is, first. Okay, ready? Imagine, of your own personal design, a sky fortress. Imagine it floating in the air, with cannons surrounding its exterior. It looks kind of cool in your mind’s eye, right? Well snap back to reality and stop right there at the concept. Don’t bother to fill in all the little details — don’t think of what metal the walls are made out of, what color they are, and what types of bullets rain down from those cannons. That’s basically how the development team handled Mighty No. 9‘s visuals in the limited Unreal Engine 3, which has since been replaced by Unreal 4 — at least how it’s optimized here. As an aside, I’m also glad that a Japanese audio track is available, because the dub does not fit nearly as well.

Since this project was delayed into oblivion for its extras, it’s only fair to talk a bit about what you’re getting. If you’ve been banking on the Ray DLC, at least for the level, you’re probably going to be disappointed. It’s on the short side, consists of several tunnels, and provides three brief boss battles similar to the Proto Man or Zero gimmick fights in the Mega Man and X series respectively (the first two confrontations don’t even have life bars). Controlling Ray is fun for sure, as she has her own set of abilities and provisos (her vampiric need to constantly absorb enemies to stave off her decreasing healthbar is cool, as is her focus on melee combat), but she’s not a game-changer as the latent level design issues persist through her playthrough. 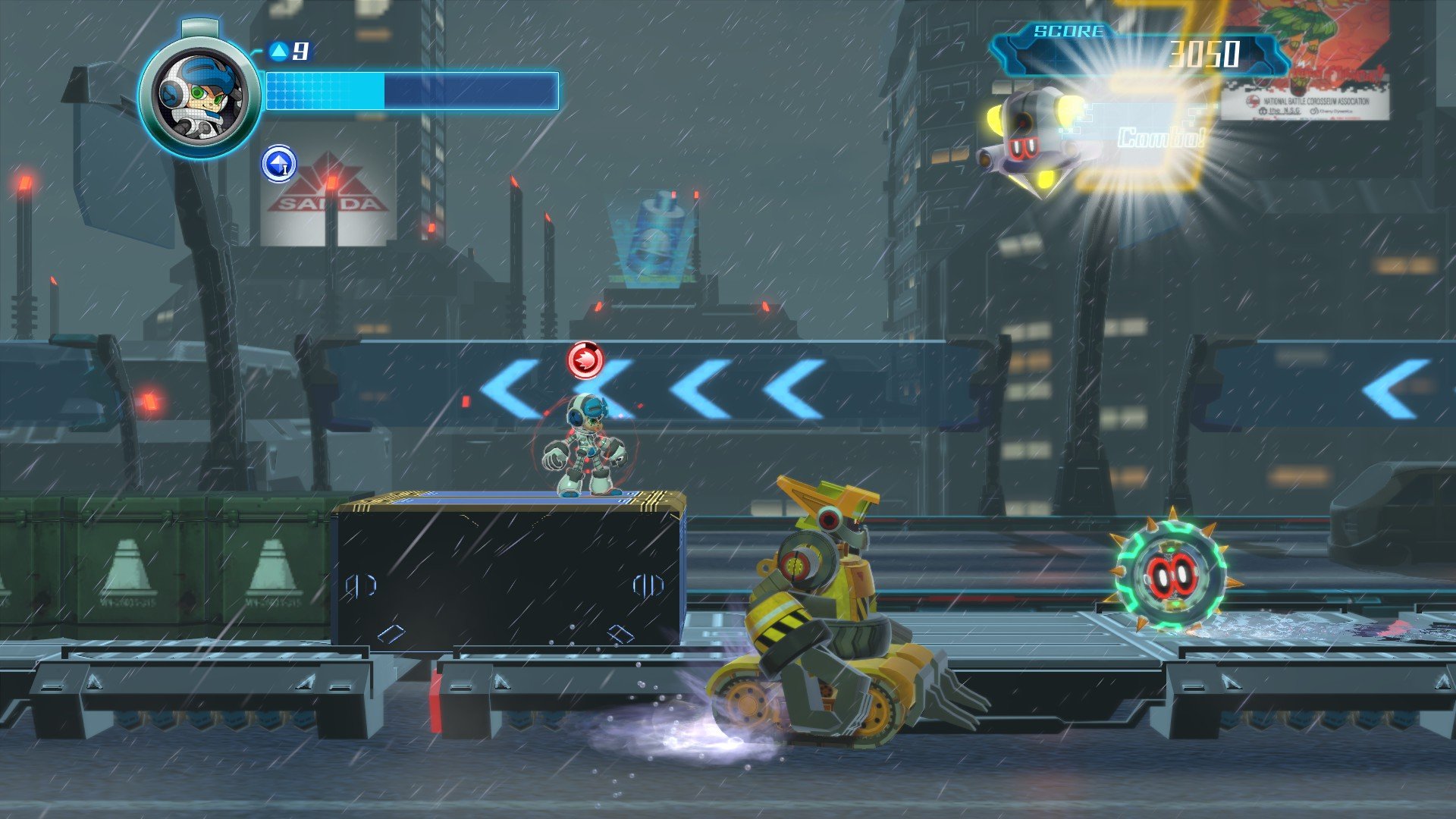 The challenge mode, while lengthy, also isn’t noteworthy. Taking place on a giant drab wireframe training palette with a blank background, you’ll get the chance to push Beck to his limits, with scenarios that remove his dashing ability, and force you to learn each copy power. It’s just as dull as it sounds, and although I totally get that they’re training you for the campaign, most of the very specific circumstances within aren’t actually present enough to warrant that type of close-up reflection. The same goes for the co-op and online features (more challenges) , and the Call sections, which, while inoffensive, are forgettable. Boss rush and New Game+, which directly link with the decent core mode, are welcome additions.

Following Mighty No. 9 has been one hell of a ride. Having backed it in 2013 at a low pledge level, I can’t say that I’m exactly disappointed with the end result. It still has a lot of baggage to unload (the 3DS and Vita ports aren’t even dated yet), but most Mega Man fans will find solace in the fact that it didn’t end up being a disaster. Other than the art style, of course.

[Disclosure: The reviewer backed the game’s Kickstarter campaign. This review is based on a retail build of the game provided by the publisher.]