The Game of the Dumpster

If there’s one big franchise that I’ve had a weird relationship with, it’s the Power Rangers series. I abandoned ship after Power Rangers in Space’s finale since it ended the Mighty Morphin universe on a solid note. Right when I thought I was free from its grasp, I decided to check out the premiere of Power Rangers Samurai. Let’s just say that it wasn’t a heartwarming reunion.

While this resulted in my love and hate relationship with the series, it was one of the factors that lead to me getting into Super Sentai, the franchise that Power Rangers got most of its action footage from. From there, it took me on my quest to become a fan of tokusatsu (live-action special effects shows), and I learned to appreciate Power Rangers in a whole new way.

Aside from making me a fan of the source material, the Power Rangers series was one of the things that made me love giant robots and characters that fight evil with special suits. With the original title getting a beat ‘em up game where we play as the main heroes and their Megazord, it sounded like a nice excuse to go down memory lane and relive the first title’s best moments. Unfortunately, this title is far from Morphenomenal. 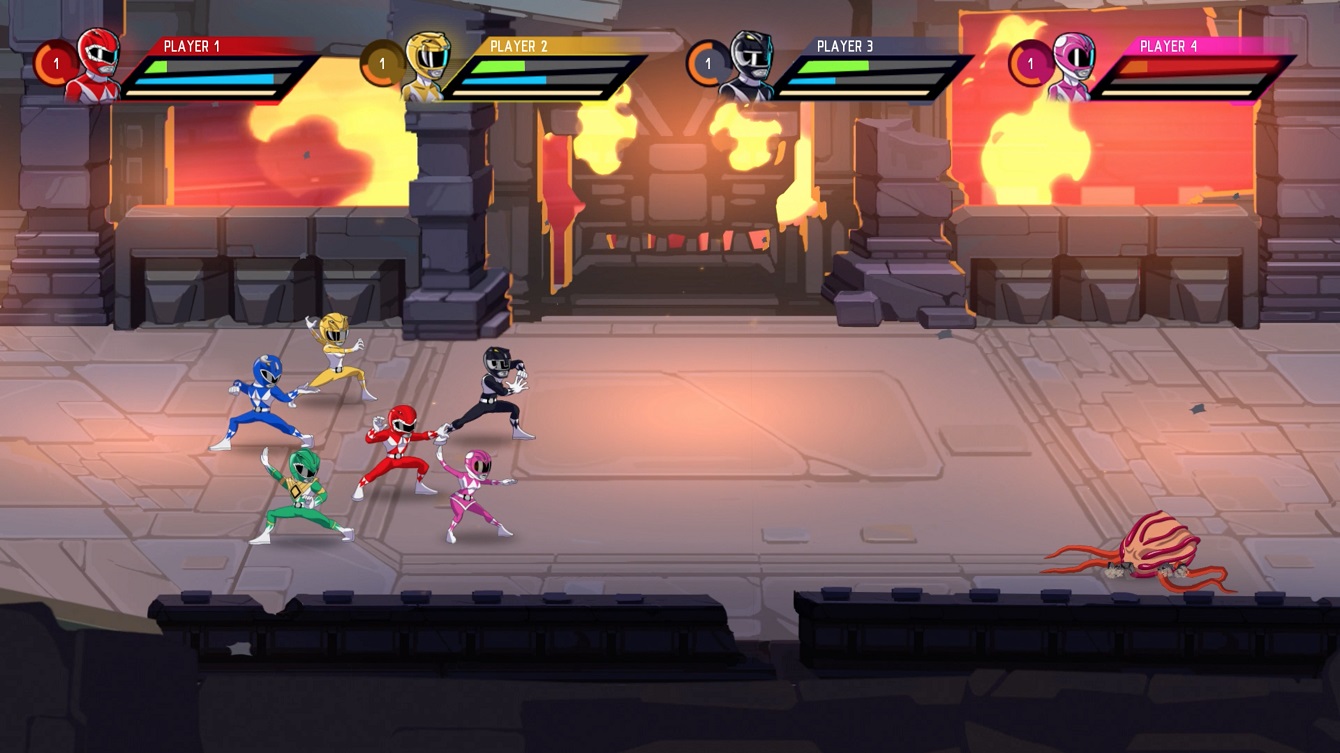 With Power Rangers: Mega Battle being an alternate retelling of the original series, the game sounded like a nice way to appeal to new fans and veterans. Sadly, this tale is missing the original show’s charm. Even though it’s the same story of Zordon recruiting five teenagers to fight against the evil Rita Repulsa, the title lacks the cheesy and campy elements that made the ’90s children program enjoyable.

A Mighty Morphin Power Rangers title without its signature corny lines is almost like a car without its engine. If the main components aren’t there, the whole thing can’t function. The game’s dialogue consists of the villains talking about their schemes, and the Rangers focusing on the stuff related to saving others. With every conversation worded in a basic manner, the puns and the aspects that resemble delicious gooey cheese are absent.

Other than its lack of cheesy humor, the game’s pacing ruins the impact of some the Mighty Morphin Power Ranges’ big moments, such as the “Green with Evil Arc.” Players go through levels without the witnessing the Monsters-of-the-Week partake in any activities that make people suffer in a silly way. Whenever a scene that’s related to the series occurs, it ends before players are given the chance to care about it. Sure, there are some references that’ll make you jump for joy, but the excitement of these moments disappear very quickly.

As for the game’s mechanics, the spirit of the series is almost present in its systems. Players start off as their favorite characters in their normal attire. Once you build up enough energy, you can morph into your Ranger form and lay waste to Rita’s Putties and Monsters-of-the-Week. The beauty of this system is that changing into a Power Ranger can fully restore your health; thus serving as a way to survive longer than before. To top it off, you’re able to combine your martial arts moves with your Ranger’s signature weapon, along with getting access to the Power Blaster and new combos when you level up. Unfortunately, these features can’t free this title from the dumpster.

While Bamtang managed to make sure that each Ranger stood out, it doesn’t save Power Rangers: Mega Battle’s action from falling flat. The title’s enemies tend to walk around for a bit before they attack the player, instead of attacking more frequently like the baddies in many beat ‘em up titles. Even though the tougher foes (such as Knasty Knight) can put up a fight, these encounters felt more tedious than rewarding when you have to kill them in a specific way while facing multiple enemies that take their sweet time to strike. Add some bosses that can only be damaged after they finish their lengthy attack pattern, and we have ourselves a Power Rangers game that overstays its welcome.

One of the title’s worst moments is the Megazord segments, which require little to no effort to complete. Each giant battle starts off with the signature robot in Tank Mode, a form that was rarely used in the series, as you shoot the monster’s weak spots and projectiles. Since this segment features the same pattern and formula, it started to get old too quick. Then the fight turns into a series of quick-timed-events where you mash different button combinations to attack the enemy in your fully-combined form. At first, it was nice to see the team’s colossal machine use its fists, lasers and Power Sword against its opponent; however, the system starts to feel underwhelming, due to its lack of variety. 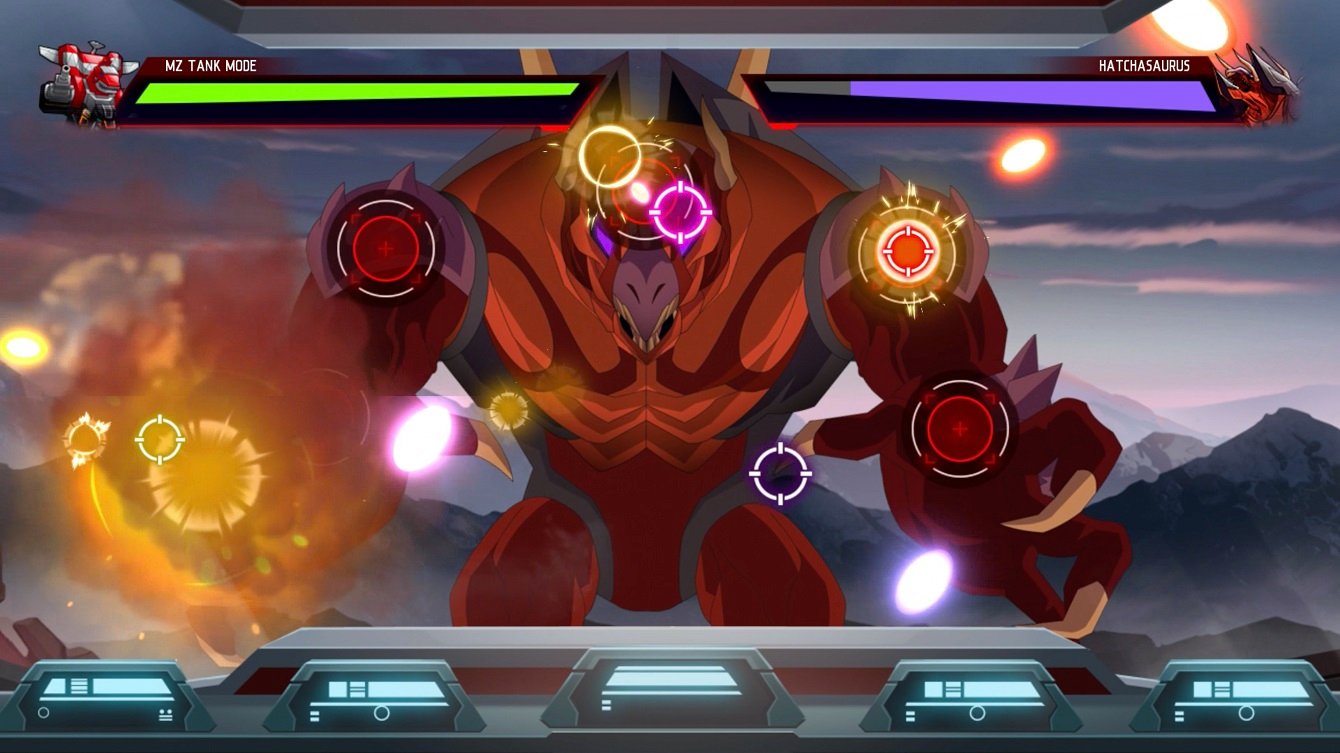 When everything comes together, Power Rangers: Mega Battles felt more like a free flash game you would find on a Website than a digital title worthy of a $14.99 price tag. Since the whole package includes only six stages, a boss rush mode, four-player local co-op, a versus mode and a challenge mode where you go through different floors filled with enemies, it almost feels like the extra stuff was there to hide the fact that this title could’ve appeared on Nick.com. Even though the game comes with DLC in the form of Rocky, Adam, Aisha, Kat, White Ranger Tommy, and a different look for Billy, this set is just a bunch of alternate skins and an extra playable character. In other words, they don’t really add much to the package, except for letting you use Saba to turn Putties into mush. Considering that these extras are part of the title’s launch bundle, they might appear as paid content at a later date.

It doesn’t help that Power Rangers: Mega Battle’s style features many plain designs. The main cast’s out-of-suit forms sport a look that’s a middle ground between serious and cartoony. All in all, they felt average at best since they failed to do justice to the original team. While I don’t mind art styles that take this route, it’s important for one to experiment with different shapes so that their work has personality. Despite the bad guys looking more exaggerated than the humans, their simplistic features weren’t amplified to make them feel stylish. If there’s one cool part about the game’s look, it’s the Megazord’s 2D appearance resembling a cool super robot; however, it wasn’t enough to redeem the title’s art.

Even though the game used a few signature rock songs from the original series, the rest of the tracks lack the show’s energetic feeling. Many of them use slow beats that fail to pick up on each other; thus lacking a rhythm that makes you want to go out and fight evil. To top it off, there’s a bug where the music wouldn’t appear in certain parts of each stage, which resulted in many inconsistent segments in its levels. 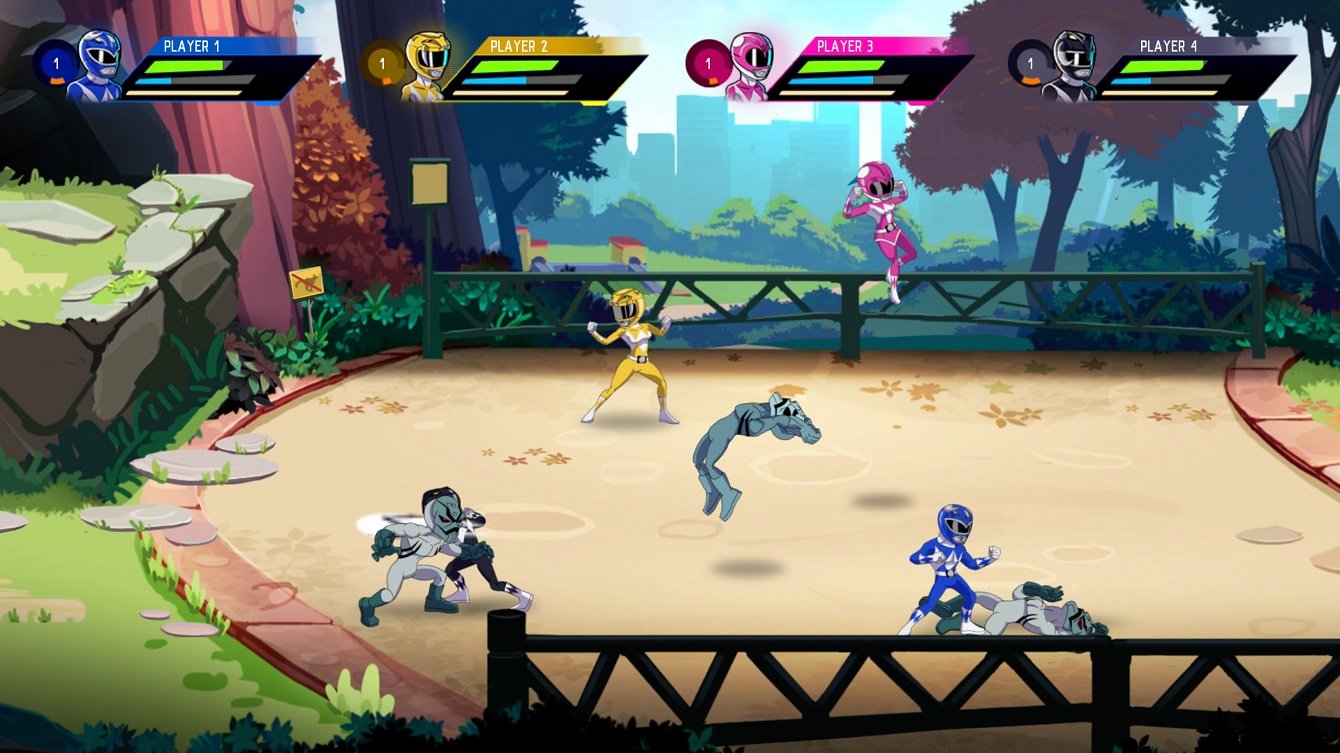 Many licensed games may not end up as solid packages, but it’s important that they do their best to give fans something to enjoy. In Power Rangers: Mega Battle’s case, it showed us what Mighty Morphin Power Rangers would’ve been like if Zordon recruited five teenagers with no attitude. The title lacks the series’ corny exchanges between the Rangers and the villains that we know and love. Instead, we’re hit with an underwhelming Web flash game that fails to capture the show’s spirit.

From the looks of it, Bamtang likely had to deal with a tight deadline and a low budget when they undertook this project, since Bandai Namco probably wanted the game to come out before the Power Rangers movie hits theaters. Seeing that the title showed a bit of potential with the way how the Rangers played, I could see this being true. However, this doesn’t prevent the game from leaving a huge dent in the Command Center.