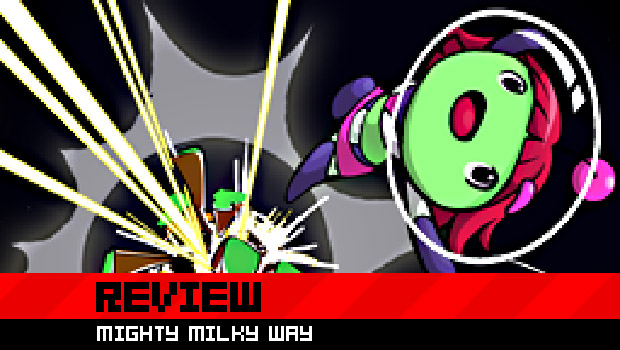 With the launch of the 3DS eShop upon us, magical unicorn factory WayForward decided to bless DSiWare with a parting gift!

Billed as a spiritual sequel to 2009’s Mighty Flip Champs!, details on Mighty Milky Way have otherwise been extremely scant. We knew it starred a green-skinned alien girl who creates and destroys planets, but beyond that we haven’t seen so much as a trailer. Quite the mystery, indeed.

Not that there should have ever been any worry! This is WayForward, the guys who added a hug button to the remake of A Boy and His Blob! Mighty Milky Way was always gonna be a pleasant romp! 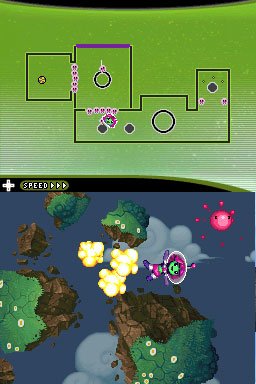 In the proud tradition of WayForward’s original titles, Mighty Milky Way stars a bubbly young heroine named Luna. Like her predecessors Alta from Mighty Flip Champs! and Shantae, Luna exhibits so much character and emotion for a 2D sprite. She’s spunky and cute in her little two-piece and leads a very comfortable daily life, according to static images that display between levels.

But that’s not enough! She also has a voice — a French voice! Throughout the game, Luna sprinkles little French phrases that, though I may not understand them, only make her more adorable. She even sings her own Vocaloid theme song! Talk about spoiling your fans, WayForward!

The gameplay itself is a little more difficult to explain than the room-flipping mechanics of Mighty Flip Champs!, but it clicks once you see it in action. Your goal in each level is to get Luna to the gateway portal by hopping from planet to planet. Luna runs clockwise around planets automatically, though you can adjust her speed by using left and right on the D-pad (or Y and A for lefties). Tapping a planet with the stylus pulses it, making Luna jump out into space, and tapping a planet a second time destroys it. 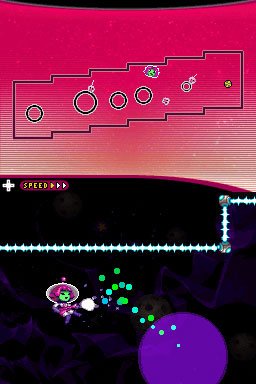 Scattered about are pieces of planet candy. By tapping an empty space on the map, you can generate a planet at the cost of a piece of candy; by holding down the stylus, you can increase the planet’s size. The larger the planet, the greater its gravitational pull, so while you can launch off most planets with a single pulse, the largest ones need to be completely destroyed before you can move on.

Then there are the space monsters. The first ones you meet are bound to the planets’ surfaces; by pulsing the planets, you send them flying outward. There are floaters that block your path, though they can be destroyed by launching pulsed monsters into them. Finally, there are homing monsters that track your position like missiles.

As the levels grow in complexity, you are expected to employ advanced techniques such as using gravitational pull to slingshot Luna around instant-kill planets and teleporters to send Luna from one corner of the map to another. You may die frequently, but thankfully there are no penalties for retrying. Levels are short enough that you always feel like success is within reach if you just try once more.

Once every ten levels, the game pits you against a goofy-looking space T-Rex that destroys whatever planet you are currently occupying with its laser eyes. Meanwhile, epic battle music with fake Latin chanting blares in the background. Yes, it’s every bit as amazing as it sounds! 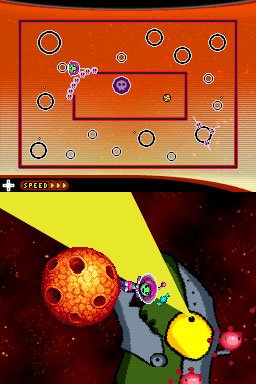 Once you beat the game (OMIGOD, twist ending!), you unlock Time Bomb Mode, in which you replay each level with a strict time limit in place. It’s supposed to add longevity to the title, but I found it way too unreasonably difficult. I can’t even beat the second level in this mode! Such a bummer.

The main mode consists of forty-one levels that should take you a good few hours to complete. There’s plenty of challenge packed in those levels, but the game probably could have been fleshed out some more with additional stages. The really meaty mind-benders don’t make an appearance until the final world, leaving me wondering what other twisted machinations the minds at WayForward could have conceived. At the very least, the Time Bomb Mode should have been much more lenient.

Though the game ends on a rather disappointing note, everything else up until then exudes that WayForward je ne sais quoi. A wonderful female lead, an inventive game mechanic, and a friggin’ T-Rex that shoots laser beams are enough for me to recommend Mighty Milky Way.