I’m unsure how sales for the original DS version of Might & Magic: Clash of Heroes were, but I’d be willing to wager they weren’t nearly as high as they should have been.

At this point, I’m starting to think these guys can do no wrong. 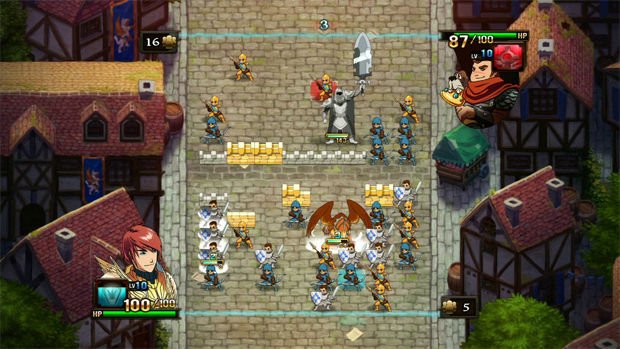 For those unfortunate souls who are new to Clash of Heroes, think along the lines of Puzzle Quest and another Capybara production, Critter Crunch. This is another deliciously evil combination of RPG-like progression mixed with turn-based puzzle battles that make grinding enjoyable, for the most part.

The screen is split in half horizontally, with your troops always stuck on the bottom portion, and your foes on top. You can pull a single, bottom-most unit at a time and drop it anywhere on your playing field, which is restricted to a grid. Units are color coded, and — you guessed it — matching colors is your goal.

Of course, you’re restricted to a few moves per turn, and you can also delete units, which adds them back to your off-screen repository. While the standard troops only need to be vertically touching two units of the same type and color to enter an attack formation (or horizontally, to create a defensive barrier), beefier unit types will need to be matched with up to four units of the same color to be enabled.

From there, your attack formations will gain strength every turn before finally running toward your opponents, hopefully destroying everything in the way and reaching the top, which is how damage is done to your enemy’s overall health. Know that there’s much more to the combat system than this basic outline — enough to hold you all the way through the game — but I won’t be going any deeper. And if it sounds confusing, it is — in text. Not so much in practice. 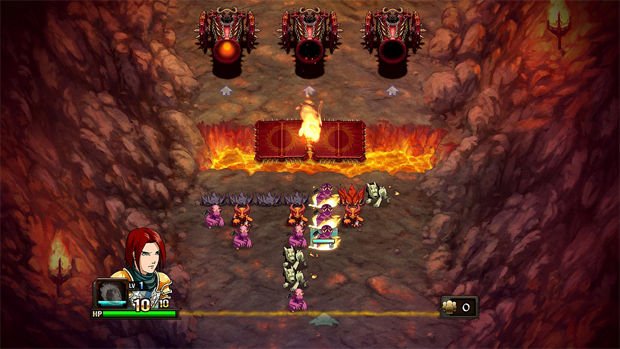 I’ll readily admit that my exposure to the lore of Might and Magic is severely limited. And, that’s the thing — you don’t need any knowledge about the fiction to get — or get into — Clash of Heroes. In fact, you can pretty much forget that part of the name exists, if it makes you feel better.

This game tells a fairly standard fantasy tale about the looming threat of an evil force (in this case, demons), and the coming together of various factions to put an end to said threat. This makes quite a bit of sense from a gameplay perspective in that you’ll spend a few hours playing as each of the five main characters.

As such, you’re always watching those experience bars fill up; in every instance, I was just shy of the level cap for my character when it was time to switch out for someone new. There’s also the benefit of not growing overly tired with the same old units, since each faction handles differently enough to keep your interest.

Initially, the story seemed kind of goofy — and, it kind of is — but it grew on me considerably. After a few hours, I was pulled in. I wanted to see where the narrative would end up, and what would become of the heroes I had been playing as. So, if you play the demo and have a stance similar to my initial one, don’t entirely write off Clash of Heroes. 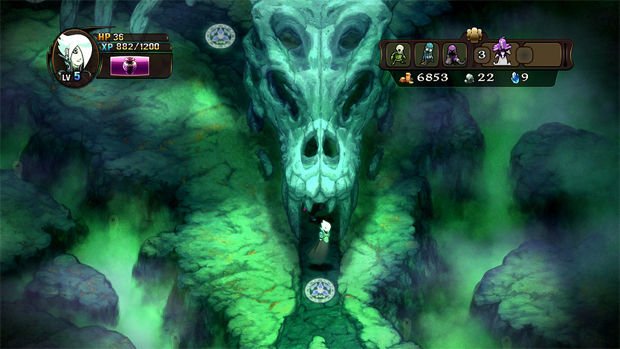 As previously noted, grinding is mostly enjoyable. The core puzzle mechanic is immensely satisfying, so that’d make sense, right? While outside of battles, you move your character across a mostly linear map, sort of like the map screens from SNES-era platformers (Super Mario World, Donkey Kong Country, etc.).

Unless you are some sort of puzzle fiend, you’ll likely have to travel off the beaten path occasionally to pick up some extra experience points. There were maybe two spots where I felt like the game was asking me to do battle after battle without giving me anything new to go on, story-wise. Considering this is a 20+ hour game, I can’t complain too much.

From time to time, you’ll get into a battle that feels incredibly unlucky. This can be disappointing, no doubt about it, but the game is forgiving when it comes to losses. As someone who isn’t particularly great at certain puzzle games, I found this to be very reassuring.

They also let you go back in and roam the map after completing a faction’s story, which is commendable. This does lead to the most blatant issue with Clash of Heroes, though — the loading. It’s, well, frustrating. The maps you move across cover multiple screens, and every time you leave the screen, you are hit with a load. We’re talking a good ten seconds here, and there’s also loading prior to every fight.

It may not seem too annoying, but it can be. Especially if you are backtracking, cannot remember where a certain shop was located, and wind up going in the entirely wrong direction. 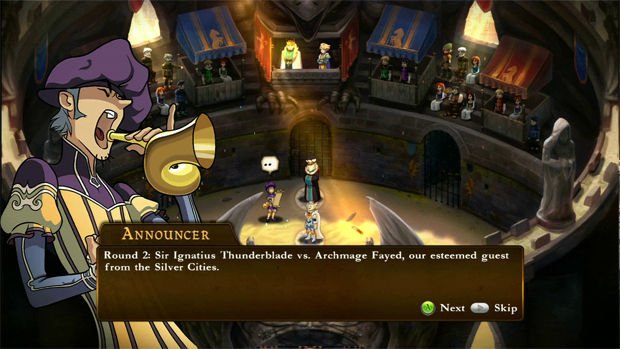 If you were into the DS version, this high-def remake is worth playing thanks to the new hand-drawn art alone. It’s gorgeous and frighteningly smooth. With so many characters on screen at once, Clash of Heroes really does feel like a great fit for larger screens.

I will briefly mention that depending on your TV, you may have a hard time reading some of the smaller text. For instance, units are numbered to tell you when they’ll launch an attack, and this can be hard to make out at times.

Naturally, there’s the benefit of online multiplayer here, with two-on-two battles being new to this XBLA/PSN version. On DS, there was multiplayer as well, but if you ask me, these console platforms lend themselves more to online play than the DS tends to.

Without a doubt, Clash of Heroes is one of the best downloadable console games I’ve played this generation. The story could use a little work, to be sure, but the puzzle mechanics are endlessly fun (and challenging), and there’s an almost overwhelming amount of content packed into this $15 download. It’ll likely consume your gaming time for the foreseeable future.

You owe it to yourself to check out Clash of Heroes if this is your first time playing, and again if you played through the DS version. As far as I am concerned, this should be the standard for the genre going forward.