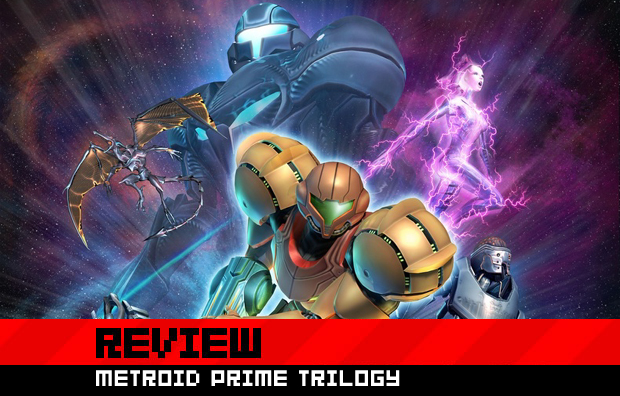 Metroid Prime Trilogy is the best deal in gaming right now, though far too many people are likely to pass it by. These three games (now available on one disk with Wii-tailored controls) tend to be either adored or ignored. I’d wager that’s because most people see the word “Metroid” and “first person” and assume that immediately know what the Prime games are all about.

If you are one of those people and you haven’t played a Metroid Prime game yet, why not hit the jump and see what really makes these games tick? It is quite possible that you are missing out on some of the best puzzle/action/platforming of your life.

So, what makes the Prime games so great? Well, contrary to common belief, it’s not that they share so much in common with Super Metroid (though that certainly doesn’t hurt). Aesthetically, the first Prime game does share a lot with that SNES classic, but in terms of what the player is tasked to do on regular basis, the games are actually pretty different. Super Metroid is a fairly fast paced, action/exploration-oriented 2D platformer. The longest period of time between jumps in an average game of Super Metorid is probably two seconds. The game is also crawling with enemies. Though most of them are avoidable, most players will spend a lot of their time in Super Metroid with their fingers rapidly alternating between the fire button and the jump button. As far as rhythm goes, the game is all  jumping/shooting/running/shooting, with the occasional moment of struggle or frustration when faced with a blocked path or dead end.

That’s not how the Prime games flow. Well, technically, they each have their own distinct rhythms and patterns, but that’ll be discussed later. For now I’m generalizing, and in general, the Prime games are much more methodically paced obstacle courses than the 2D Metroid titles. Almost every game requires some thought and analysis to get through, not to mention the application of new strategies and techniques. Even the rooms that can be cleared with just jumping and shooting require you to really think about where you jump and what you shoot. Pretty quickly, the Prime games require genuine study of every nook and cranny of every room.

Sure, Super Metroid also rewards players for throwing on the X-ray scope everywhere you go, but that will just help you net more extraneous power ups and luxury items. In the Prime games, full exploration of your surroundings is almost always required to move forward. Nearly every room is a puzzle, and the variety of tactics required to solve these puzzles is really what make the Prime games special.

The first game in the series definitely plays it the most safe, but it’s still a fantastic example of puzzle-platforming design. The game’s main goal is to faithfully represent the ideals of Super Metroid in a 3D world, and you couldn’t ask for a better adaptation. The music, the weapons, and nearly all of the power ups are there, but their implementation is altered to fit the X,Y, and Z axis gameplay structure. Rediscovering the joy of the wave beam is a must for any fans of the 2D Metroid games, but there is absolutely no reason why fans of the 2D Zelda titles or other games in the genre wouldn’t love Prime 1 too. It’s an immensely well crafted title that’s hard to find fault with.

My favorite game in series comes next. Metroid Prime 2: Echoes is often looked at as the bastard child of the Prime Trilogy, but I love it. Ironically, it’s the things that others don’t like about the game that make it so special to me. Echoes takes the most risks out of all the Prime games, and for my money, it’s the best example of what makes the Prime series so special.

Like I’ve been saying, to me the Prime series is all about entering a room, examining it from head to toe, and figuring out exactly how to “conquer” it. Prime 2 offers the greatest level of variety and ingenuity in tasking the player with “room conquering”, and that’s why I love it best.    The central gimmick of the game is the light world/dark world dichotomy, much like the one used in The Legend of Zelda: A Link to the Past. Not only does Samus have to use a variety of beams, morph balls, and visors to get from one place to another, she needs them to contend with the challenge of traversing two different dimensions.

The dark world here offers so many opportunities of new obstacles. For starters, just surviving in there requires that you carefully plan your moves from safe spot to safe spot. Just existing in the dark world eats away at Samus hit point by hit point, and the only places she’s safe are under the specifically placed light bubbles. Figuring out how to move from light bubble to light bubble, dimension to dimension, as well as the standard “room to room” progression present in Prime 1 allows Prime 2 to provide the most complex and interesting challenges in the series. Add to that the increased need for ammunition conservation, the visually stunning new light and dark suits, the brilliant implementation of Screw Attack, the introduction of Dark Samus, and the highly underrated four player split screen versus mode, and you have the most compelling, most Prime-y Prime game of the bunch.

Prime 3 is my least favorite. It seems that after the lukewarm reception of Prime 2, Retro and Nintendo felt that with this tri-quel, it was time to take things in a more mainstream direction. Where Prime 2 is all about throwing as many different types of obstacles at the player as possible, Prime 3 requires the least amount of tactical thinking and room analysis out of all the games in the series. It’s more linear, more action-oriented, and quite heavy with in-game dialog (at least by my Metroid standards). If Prime 1 takes the central concepts of Super Metroid and brings them to 3D, then Prime 3 could be said to do the same for Metroid Fusion. It’s still got a lot of great puzzles and power-ups, but compared to other Metroid titles, it’s a much more traditional, straight forward action game. The few new ideas present, like the ability to use your ship like a tow truck and use damage to transform your suit into a Phazon powered walking tank are all cute, but aren’t particularly smart or memorable.

It’s funny, because when Prime 3 first came out, it quickly became my favorite game in the series. I see now that my initially appreciation on the game had practically everything to do with the way the game controls. Now that Prime 1 and 2 have the Wii-controls attached as well, Prime 3 doesn’t seem quite as wonderful by comparison. Prime 3 is still a great game; it’s by far the best looking title in the series, and those who love action and sci-fi storytelling may prefer it to Prime 1 and 2, but those who play Metroid for the sense of isolation and exploration may be a tad disappointed.

About that control scheme; it’s a constant puzzle to me that some people still prefer to play 3D shooters with two analog sticks. Honestly, I can’t help but suspect that it’s just a generational thing. I know a lot of old people who also think that Frank Sinatra was more musically talented than The Beatles, and that has everything to do with the fact that by the time The Beatles hit, these people were too set in their ways to accept anything new. That’s the only thing I can think of that could block someone’s appreciation of the Wii-pointer’s use in the FPS genre. I don’t care how easily your arms get tired, it’s just more involving and immersing to aim at the screen and shoot exactly where you want to shoot. You don’t have to extend your arm all the way, people. You can keep your arms down just like you would with a regular controller and simply aim from the hip. It worked in the days of the old west, and works on the Wii as well.

OK, sorry for the tangent. To wrap up. a few last word about the Prime series. These games are often called “First Person Adventures” as opposed to “First Person Shooters”. I think that’s pretty damn weird, because the Halo games certainly offer their fair share of adventure, and the Prime games sure have a whole lot of shooting. I think what people are trying to say with the whole “First Person Adventure” nonsense is that the Prime games require for you to think and shoot, and not just one or the other. That’s true enough.

Overall, I’d actually be more likely to recommend Metroid Prime Trilogy to fans of Portal than fans of Halo, though I’d imagine that fans of either game would find the game(s) to be worth the purchase. This is about as well crafted as videogames get. If you don’t have already these three games in the “sold separately” incarnations and/or if you like the way FPSs play on the Wii, you owe yourself the privilege of owning Metroid Prime Trilogy.

Superb (9s are a hallmark of excellence. There may be flaws, but they are negligible and won’t cause massive damage to what is a supreme title.)