Making my way through Metro Exodus back in February was one of the most frightening video game experiences I’ve ever had. As I noted in my review, I’m a particularly jumpy person. I’d be on edge in a room full of kittens, lest one of them moved suddenly, or looked at me in a violent fashion. As such, THQ Nordic’s journey into a mutation-filled Moscow and beyond gave me the jitters in a big way.

As a video game however, Metro Exodus was pretty damn good. Once you got past the awful game-breaking launch bugs, a deeply detailed world awaited aboard The Aurora, packed to the brim with atmosphere, bad voice-acting, and horrifying monsters. Why I’m choosing to return to Dmitry Glukhovsky’s grim and unsettling world is anyone’s guess, but here I am, donning my spider-covered visor and descending once more into the abyss. 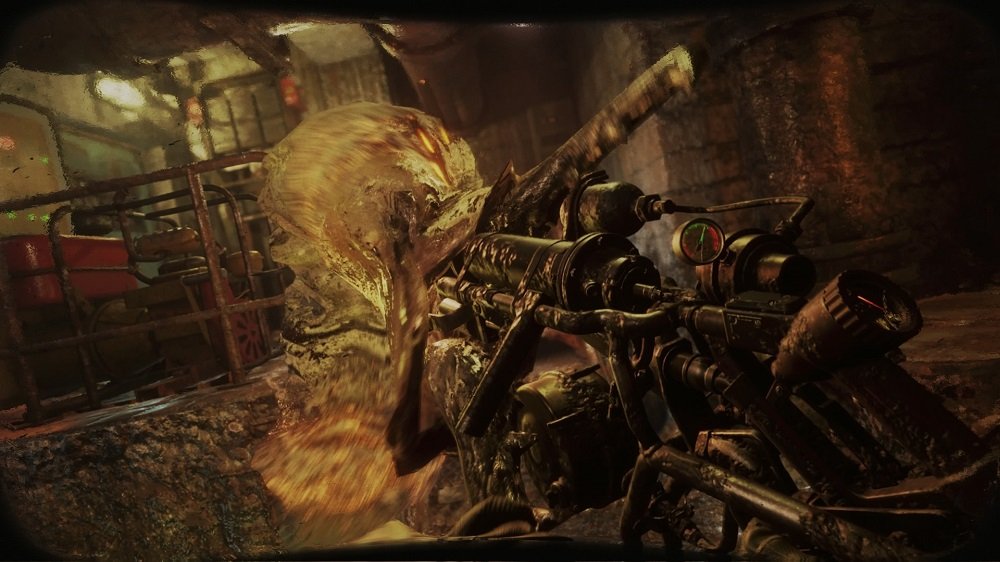 The Two Colonels is a standalone DLC chapter which serves as both a prequel and a side-story to the events of Metro Exodus. In a neat and effective bit of dual storytelling, The Two Colonels sees Col. Miller retracing the steps of Col. Khlebnikov’s final days. After a routine – but nonetheless scary – mission clearing out irradiated slime with a flamethrower, Khlebnikov attends a New Year’s Eve party with his son Kirill, which sadly proves to be the last hurrah for Novosibirsk’s thriving community.

As The Two Colonels continues, Khlebnikov engages in violent combat against both monsters and man, as the tale turns into a miserable story of a civil uprising and a totalitarian coup, exploding in scenes of depressingly relatable violence, as the people, desperate for medicine and support, turn against the OSKOM.

To explain further would be to give too much away, but it is fair to say that, despite the return of some eyebrow-raising voice acting, The Two Colonels features an excellent and affecting story of duty vs. conscience, of the line between man and soldier, and the sad state of affairs when desperate, dying civilians somehow become “The Enemy” to the state. It’s impossible not to feel just a nagging sense of dread in some of The Two Colonels scenes, extreme as they may be. From civilians asked/forced to give up everything under the thin promise of security, to refugee children hounded into shitty enclosures, with the state ultimately forced to separate the Have and Have Nots, The Two Colonels is effective in its weirdly resonant drama.

As you may have noticed, most of this text has been about the narrative, and for good reason, as The Two Colonels is a chapter that leans far harder on conversation and lore-building than it does on actual gameplay and action. That isn’t to say that the trademark combat and atmosphere of Exodus doesn’t remain. The DLC has its fair share of scares, darkened corridors, and fearsome beasties to ignite, but the two-to-three-hour adventure definitely feels more like a story Metro wants to tell, rather than an adventure it wants you to play. Elements such as crafting and scavenging are almost entirely bypassed, with NPC chatter, exploration, and explosive set-pieces brought to the forefront of the action.

Ironically, by giving Khlebnikov an actual voice and dialogue, The Two Colonels far supersedes the Metro Exodus campaign when it comes to character engagement, serving as yet another reminder that Exodus’ “silent protagonist” direction was a poor choice. The flamethrower – which you need to pump frantically like a ’90s Super Soaker – is a powerful weapon, offering a surprising sense of catharsis as you clear out the slime-infested tunnels and giant man-eating worms that reside within. Icky.

Metro Exodus: The Two Colonels is light on action and heavy on narrative, but will please dedicated Metro fans with its gripping, even unnerving, lore. While its smart story succeeds in engaging the player dramatically, the lack of extended gameplay sequences may leave some feeling like they’re watching an interactive movie, rather than playing a new chapter of an action-adventure title. A short journey, yes, but still a trip worth taking.