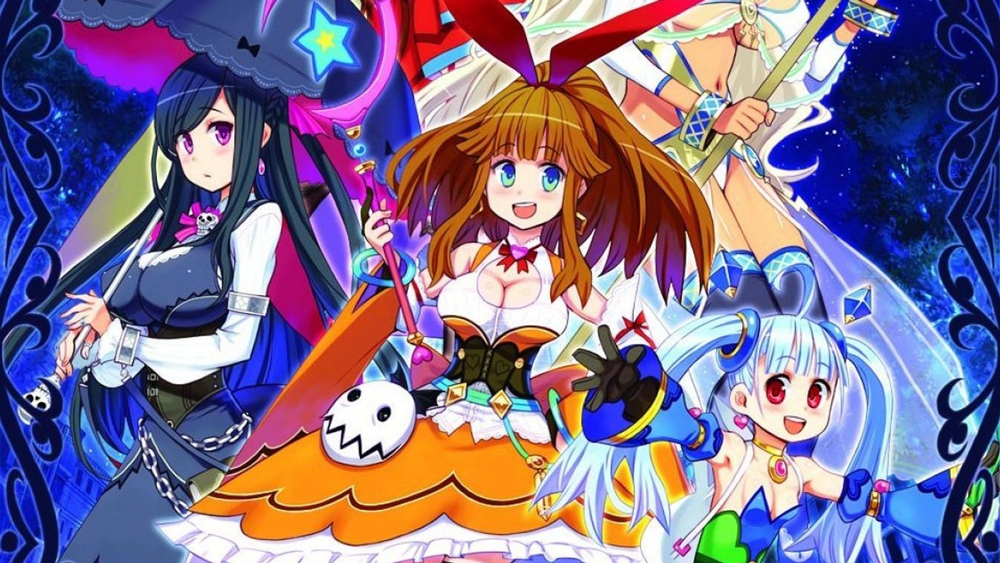 When I’m reviewing a game, I keep a notebook for any information or anecdotes about it I want to remember when it actually sit down to type the review out. Scribbled on these pages will be names of places and characters so I don’t forget, funny lines I want to make sure I include in my review and all the instances of the rage I feel when I come across something that just pisses me off.

For MeiQ: Labyrinth of Death, my notes are mostly negative, pointing out problems with the story, dungeons, and enemies. But at the end of every complaint, of every issue I have found, is the same five-word phrase:

But I’m still having fun. 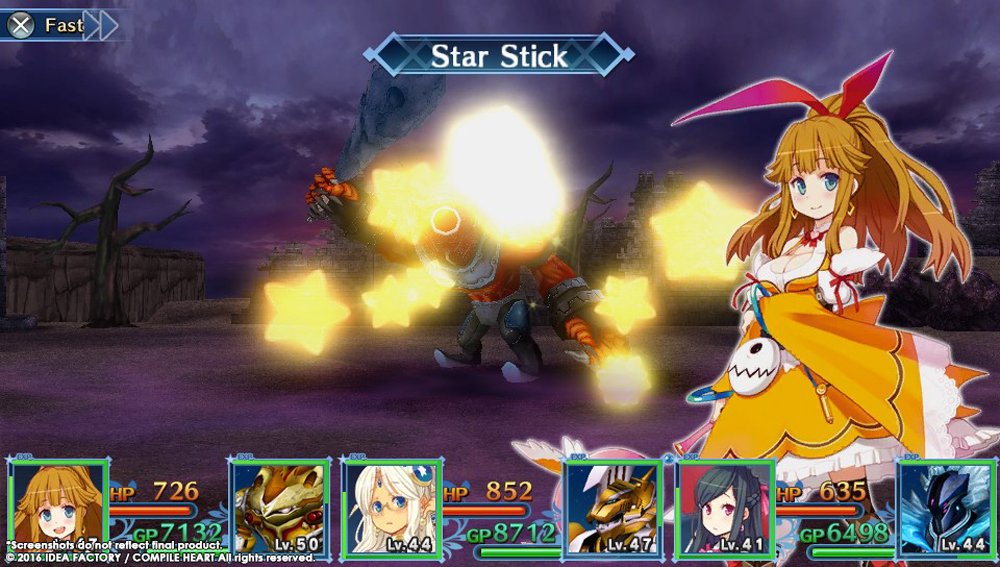 MeiQ: Labyrinth of Death takes place on a mysterious planet that has stopped moving. With the fate of the world on the line, five girls known as Machina Mages are summoned to a city built into the side of a canyon known as Southern Cross. In order to save the planet, the girls will have to conquer several dungeons before they can wind the planet key and start its rotation once more.

If that setup sounds like a JRPG cliche, the rest of the story won’t surprise you. In this 30-ish hour journey, main character Estra and the rest of the girls will learn valuable lessons about teamwork, friendship and believing in one’s self while also trying to save the world from certain doom. There’s zero effort in telling a compelling story and it wasn’t long before I stopped caring about anyone or anything.

It also feels small, considering the fate of the world is on the line. The entirety of the game takes place in Southern Cross. Other locations are mentioned but never seen. There are slightly interesting bits of backstory and world building, but these are relegated to journal entries you find along your journey, which is a storytelling technique I wish all games would stop right now. If your backstory is more interesting than your main story, make a game about the backstory instead.

Of course, as is the case with many turn-based dungeon crawling RPGs, the story really doesn’t matter. It’s only there to set up all that sweet-ass dungeon crawling. There is a total of six dungeons in the main story, each with its own theme and map concept. Dungeons are either compactly designed or an aimless mess. My journey was spent walking through scores of empty rooms, dead ends, and other poor design choices that showed a clear lack of discipline. I know I’ve only become serious about dungeon crawling this year, but the one constant I’ve found across each game I’ve played are maps that are designed to be interesting or clever or tricky or testing in some way. MeiQ dungeons are none of those things.

Exploration is encouraged as there are many treasure chest and secret doors to find, but because of the poor layouts, doing so became more of a hassle than an enjoyable journey. One dungeon, in particular, is full of elements that actively tried to deter me from continuing. I didn’t stop, but I also didn’t do much exploration because I just wanted to get the hell out of there. That turned out to be a big mistake. Because I quickly went through it, I failed to walk down a crucial pathway and also missed a hidden door, both of which contained a major tool that would have greatly aided me in my journey. 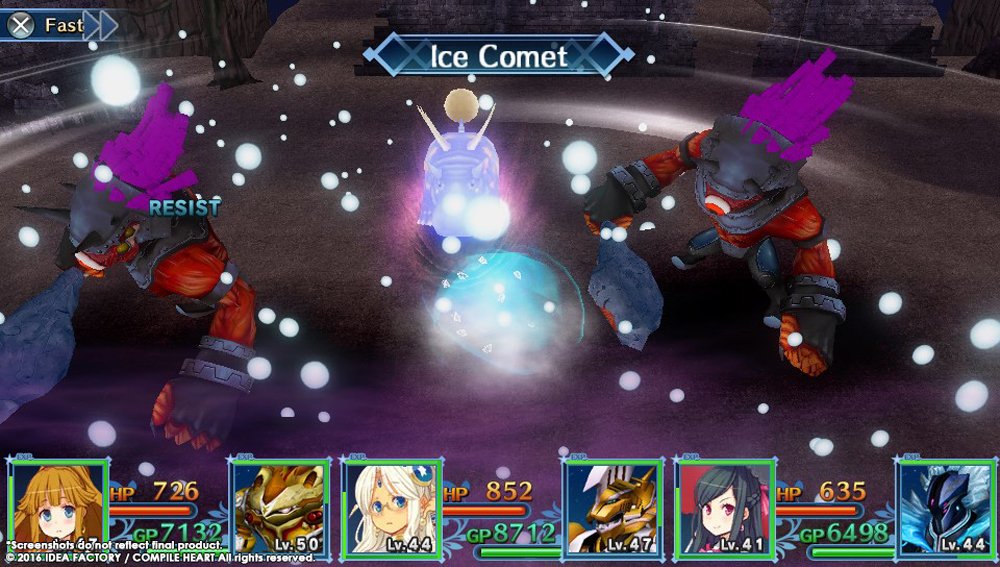 Despite all that I’ve mentioned so far, I was still having fun. Why? Because the battles are quick fun and the customization options are incredibly robust.

In battle, you’ll control up to three Mages and their Guardians, robots assigned to each girl to fight for them. While you technically have six characters in combat, only one member of each pair can act in a single turn. Act with the Mage and you leave her open to retaliation. Act with the Guardian and they take the brunt of the damage. As Guardians have thousands of more hit points than your Mages, this is, of course, the ideal situation.

However, you’ll want to act with your Mages from time to time because they are the only ones who can heal, buff or cast status ailments. It’s a risk and reward system, and you’re encouraged to try different tactics throughout your journey. If you lose a boss battle, the game will let you know what percentage chance you have at beating it with your current set up. If it’s too low, you go grind for a while (which I did for about eight hours). If it’s somewhere above 60%, you just need to change your strategy up.

Part of that strategy will be equipping your Mages and Guardians with the best seeds, gems and parts you can. Mages can use seeds and gems to build up their stats, gain more money or XP, or alter the enemy encounter rate. When your assign a gem to a Guardian, it can greatly change how it attacks. Each Guardian has two replaceable arms, and a replaceable and upgradeable body. Guardians will start out with arms that have just a single attack assigned to it, but you’ll quickly unlock new parts that feature several attacks. You can only use one attack per turn but with different gems, you can have your Guardian use multiple attacks in a single turn. 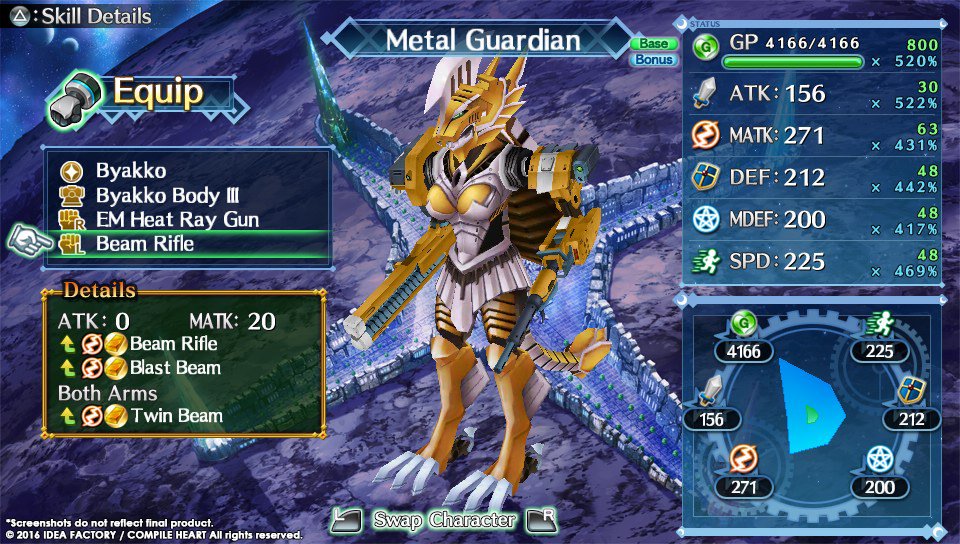 This can break the game a bit as there are gems that allow you to use every attack in a Guardian’s arsenal. When combined with a buff from a Mage that has you attack twice, that Guardian can end up striking the enemy more than a dozen times in a single turn. With the right combination, I’d say about 80% of the enemies I faced would be wiped out by a single Guardian. The rest were either bosses or damage sponges.

As extensive as the customization was for the game, it was also quite limited. I originally compared it to the Materia system from Final Fantasy VII, but in the end, I see it more closely resembling the Djinn system from Golden Sun. That game has hundreds of ways you could customize your characters with the various Djinn, but the “correct” way to do it was to just assign the same element Djinns to one character.

It’s the same here as MeiQ employs a strict elements system. You’re told, for instance, having an Earth-based Guardian with Earth-based gems and Earth-based parts is the ideal way to go. While doing so gave me the most powerful Guardians necessary for beating the final boss, I would have much rather had been allowed to greatly experiment with the customization options than be tied to this simplistic elements set-up. 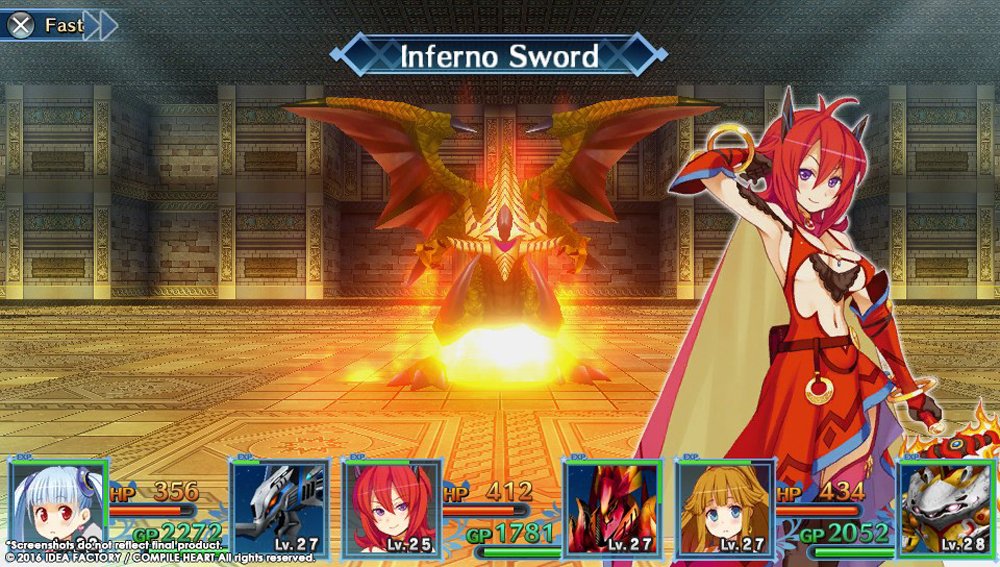 MeiQ: Labyrinth of Death isn’t a bad game, it’s half-assed. There are a couple of interesting ideas here that, applied to a competent dungeon crawler, could have made for something great. Instead, it’s just passable. But I still had fun.