I have a sneaky suspicion that Compile Heart will continue to make Hyperdimension Neptunia games until it’s covered every single genre there is. So far we’ve had RPGs, a Musou-like, a tactical RPG, an idol-raising simulator, and now an action hack-and-slasher. For fans of the series, it’s a great way to expose them to game types they might not be familiar with. For fans of those genres, these games can be a good way to get them into a series the might not have tried yet.

That is, they can be if the games are any good. 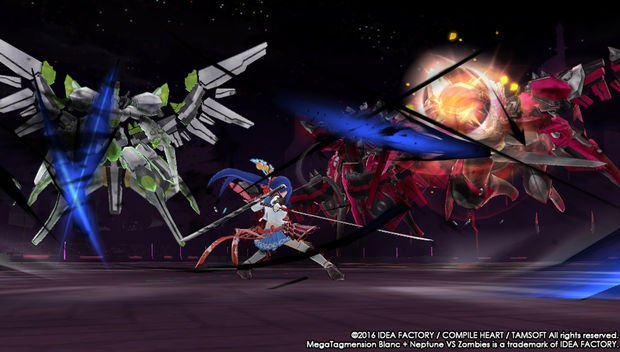 Breaking from series continuity, MegaTagmension Blanc + Neptune VS Zombies takes its cue from the Chou Jigen Game Neptune: High School series of light novels and is set at the Gamicademi High School. The school is in danger of being shut down due to low enrollment and, in a plot taken directly from a lost episode of Saved by the Bell, series protagonist Neptune devises a plan to save it by making a zombie movie and entering it into a film competition. Lucky for her and the Gamicademi Film Club, a real zombie epidemic breaks out at school and a God awful single-player campaign begins.

I can’t be mad about the story, no matter how unfocused and simpleminded it is, because it’s clear the people translating this game agree with me on its quality. Between the lesbian melodrama, clever and sometimes obscure movie references, typical Neptunia charm, and laugh tracks that were only funny the first time are admissions by the writers that the story is just not that good. Throughout the five hour-ish campaign, characters constantly talk about how dumb the plot of the film being made throughout the game is; after a while, I couldn’t help but think they were referencing more than just the plot within the plot.

Out of the entirety of the campaign, I’d wager maybe 30% was actually spent hacking and slashing my way through zombified versions of the Neptunia grunts. As a Tamsoft-developed title, combat here plays very much like its flagship Senran Kagura series. There are two attack buttons (one weak, one strong) that you use to chain together spectacular combos, along with double jump, dash and support characters that can give you buffs. The costume breaks from Hyperdimension Neptunia U: Action Unleashed are out, but the tag-team mechanic remains. At the beginning of each mission, you can select two characters to take into battle. Not only does this allow you to do joint attacks, but if one character loses all their energy, switching her out for your backup will allow her to regain health. Not that you’ll ever need to do that.

The campaign here is the embodiment of the stereotype people typically associate with Tamsoft hack and slash games. There is zero challenge, you just mow through enemies until you kill the necessary amount and move on. Missions can typically be finished in less than 90 seconds with the longest taking me all of five minutes.

When I wrapped up the campaign, I asked myself why it was included at all. At no point did I think this game was ever interested in me getting excited about playing through its single-player mode. You unlock new characters as you play through it, but you’re never forced to use them. In fact, it’s the smarter choice not to switch out from the first two characters you selected as this will require you to replay the same, simplistic missions time and time again to level them up properly. 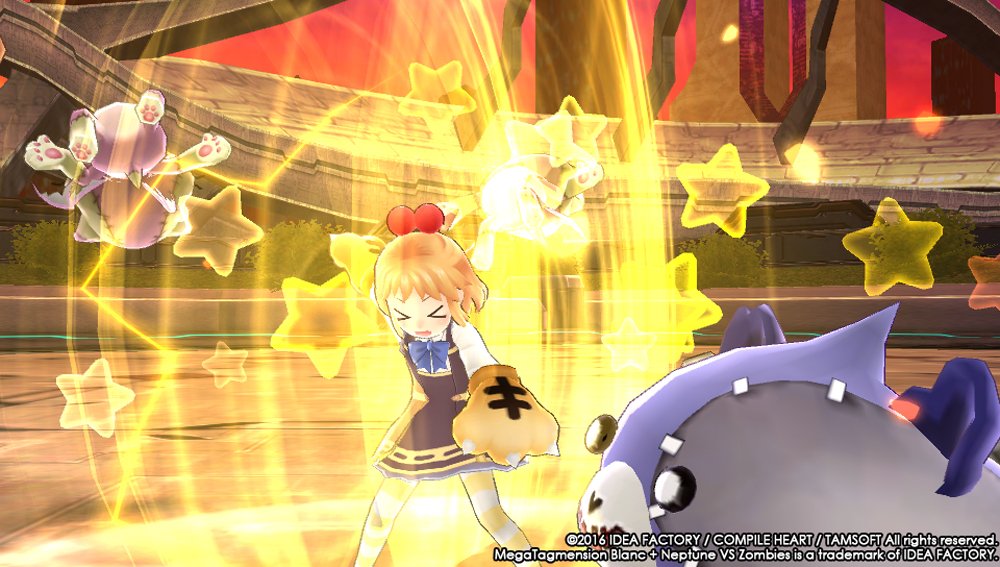 Frankly, the girls in this game deserve better. There are 14 playable characters with junior student Tamsoft being the one new addition to the franchise. Though some of their weapons may be similar, each character attacks and moves differently enough that it’ll take some time to familiarize yourself with each one. For me, the best characters were Tamsoft, Uni and Peashy, though they all were a blast to control in battle.

MegaTagmension is the first game in the series to include multiplayer and that’s where you’re going to get the most out of this game. No, the missions aren’t any more difficult or complex, but here you can play with up to three other people online. This mode features enemies and bosses not seen in the campaign, as well as new arenas to fight in. If you don’t have any friends you can tackle this mode alone and it’s actually possible to succeed. When I finished the campaign with my bae Nepgear, she was leveled up so high I was able to complete a good number of multiplayer challenges by myself in just a few of hours. 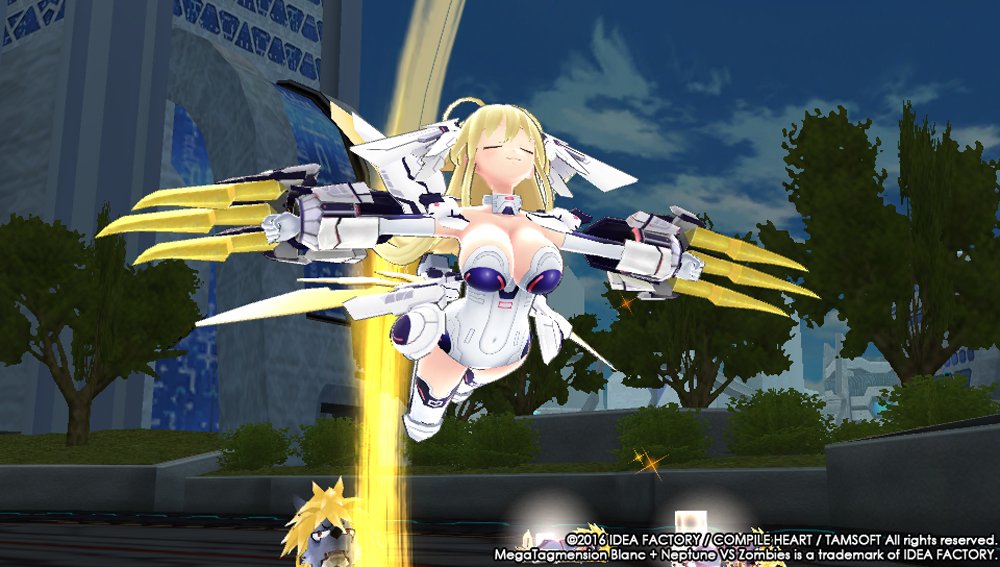 If you do try and solo the multiplayer missions, there are changes you’ll need to accommodate when compared to the campaign. There is no tag mechanic here, no support characters and no going HDD. Instead, you’ll have to rely on your hack-and-slash skills. The Tamsoft signature combat holds up well and I actually found myself having fun when I wasn’t fighting with the terrible camera. Lock-on is a joke that only seems to work half of the time, and when it does lock onto an enemy, it’s likely it won’t be the one you were hoping for. When you do finally lock onto the right target, there are many moves in your arsenal that will undo the lock-on for no good reason. As this series is into its self-referential humor, I hope the next Neptunia game features this game’s camera as its final boss because that may actually be a challenge.

I was all but ready to write MegaTagmension off until I finally managed to find people online to play with. Taking down massive bosses with three other players is a blast. Yes, the online system is overly complicated, but once I was in battle, everything ran as expected. Even with the poor wifi capabilities of the PlayStation TV, I was never dropped from a match and the occasional frame-rate dips were always manageable. Given how rushed everything else in this game feels, Tamsoft did right with the online multiplayer. 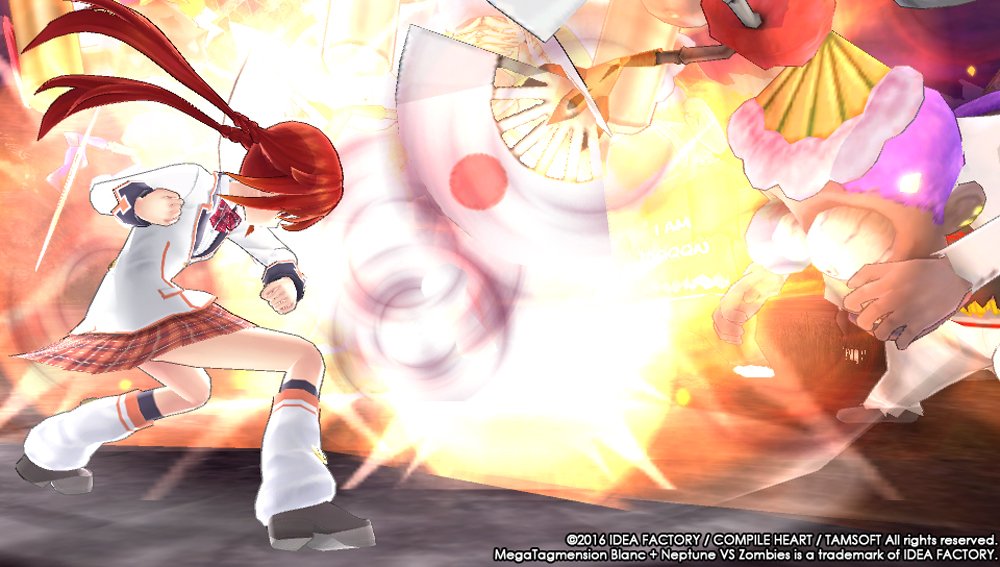 It would be easy for me not to recommend MegaTagmension Blanc + Neptune VS Zombies. The game is smothered by a poor camera, an excess of short load screens, a forgettable campaign, simplistic missions, portions of undubbed dialog and an overall lack of polish. But even with all that, I still managed to have a bit of fun pulverizing the bad guys with a little help from some scantily clad girls online. Is it $40 fun? Hell no, but you should keep it in mind if ever it goes on sale and you’ve had your run of other, more superior hack-and-slashers.