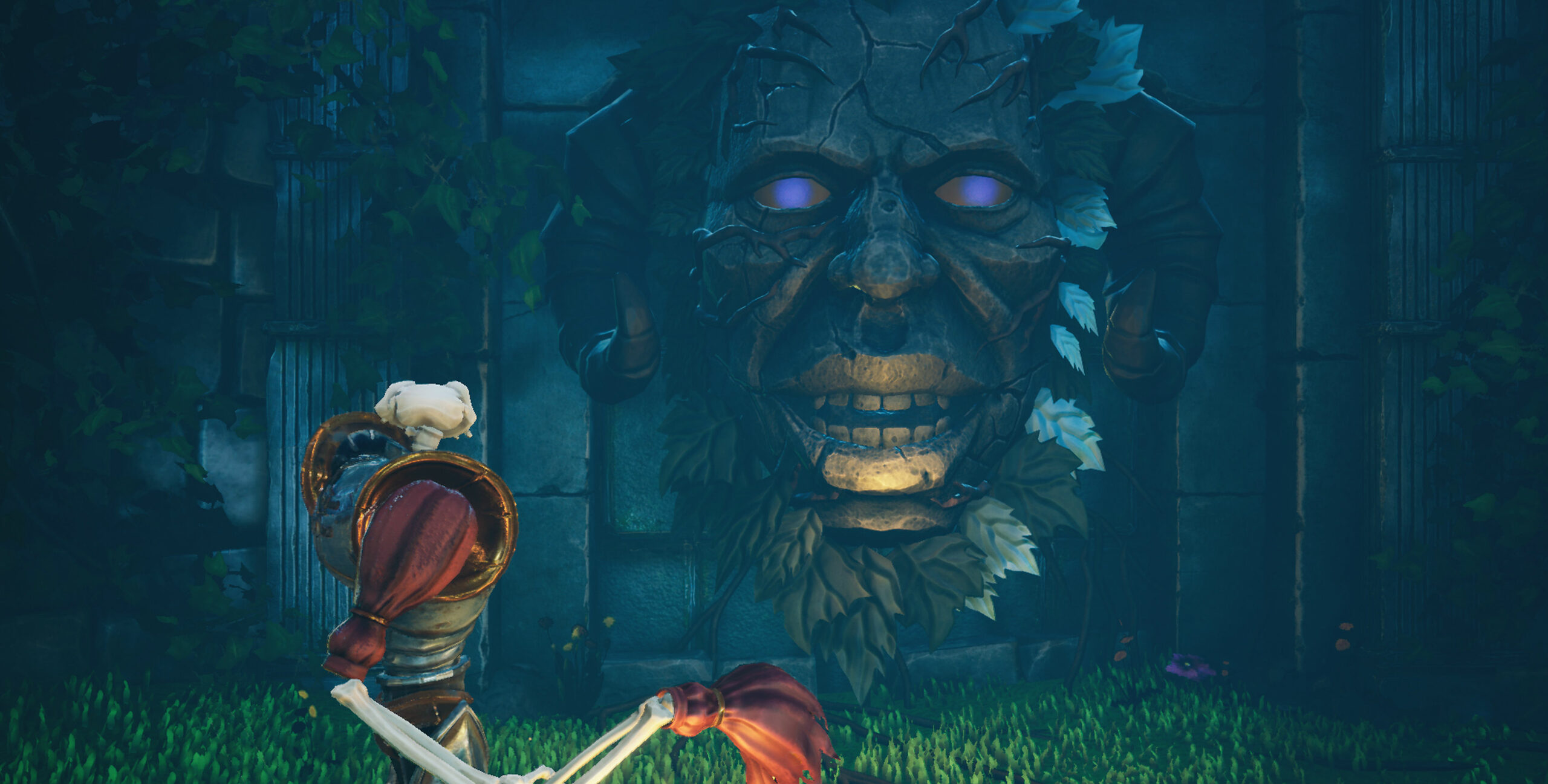 Skeleton: Dead and loving it

There’s not enough games about losers. Growing up I really resonated with Lester the Unlikely on the SNES, which dealt with a hapless hero who eventually learned how to become a legend (his animations changed and everything!). MediEvil was another project that ventured into that territory.

Its hero, Sir Daniel Fortesque, sucks. He was falsely declared a hero after dying immediately before the battle against the evil sorcerer Zarok really even began. Fortunately his debut game doesn’t suck, and neither does the remake.

Developer Other Ocean Emeryville and publisher Sony were committed to recreating MediEvil brick-by-brick by design. Other than some extra visuals that needed to exist (because that level of detail wasn’t possible in the original) and some extra voice lines, nearly everything is the same. That includes enemy and item placements, all of the major dialogue, story beats, and so on. “Goofy creepy crawly” is not a popular aesthetic these days and we need more of it.

With that in mind, if you didn’t like MediEvil a few generations ago, you aren’t suddenly going to like it now. It’s a matter of philosophy, isn’t it? Sometimes a remake will completely overhaul everything for the better (Resident Evil 2 2019), sometimes it’ll add a few extras but mostly stick close to home (Wind Waker HD), and in this case, it’s a shot-for-shot remake of a game from 1998.

As obtuse as it sounds, the setup is a lot like the original Doom. You select levels from a linear map, which have an exit stretched across a labyrinthine layout. There’s keys that can get you into secret areas, and a collectible goblet in each level; diversions from the finish line. MediEvil‘s lore-based reasons for exploration and unlocks are really what drew me into going for a 100% completion during the PlayStation era. Having former [actual] champions give Dan powerful gifts and talk to him as you watch him “level-up” as a hero before your eyes is magical, and a more natural way to implement some of the RPG elements the team was clearly going for.

Expanding on that connection a bit, Daniel isn’t very well-liked in this universe. Not only does Zarok hate him, but in the “Hall of Heroes” — the main Valhalla-like hub, filled with spirits of actual larger-than-life figures — an otherworldly force openly disrespects him, stating that he’s not yet worthy of being a hero (“fraudster” is a term that is used). Why they would screw him on this (when it wasn’t really his fault that he was elevated to hero status) is beyond me! But I love to see it in practice as it’s chuckle-worthy.

So much of it holds up, which is a testament to the love and care that went into this series in the first place. The narrative is Disney-esque and still works, the voice work is fantastic, and the actual worlds are brilliantly crafted and unique. Some levels are mere formalities, funneling into optional sidequests or setting up other bigger setpieces. It’s weird, but I kind of dig it? We live in a world where so many action-RPGs are extraneous, filled with pages and pages of abilities and pointless map dots to explore. Don’t get too comfortable yet.

This isn’t a technical action game, as most of the brawls operate on a hack-and-slash level. Mashing the sword button swings in a flailing fashion, but you can also use a spinning charged attack and block with a shield. Nearly everything has a percentage point on it (from clubs to crossbows) to discern its finite usage. Goblins can steal your weapons, forcing you to recover them right then and there or buy them back. There’s a lot of old-school hack-and-slash design in here (Golden Axe, especially) that was appreciated back then and might be a little too retro for modern audiences.

Bosses are handled in exactly the same way, often with “massive weak point” strategies, several of which can be bested in under a minute. Not everything needs an iFrame-heavy dodge button and MediEvil proves it. There’s a certain joy in naturally dodging through movement, sashaying between threats. It’s also not unforgiving. Grabbing a potion while you’re full will queue up a resurrection potion, Zelda style, and falling off a cliff will use one of those potions. Certain concessions come with that sort of design.

Mishaps like dying instantly when diving into even a small amount of water still feel jilted, as does the camera sometimes when it tries to follow Sir Dan around closed quarters. For better or worse (better for me, as someone who loves manipulating a camera at all times with a claw hand), this is a game where you’re going to need to use the right analog stick to sweep the camera around. Dan is very loose when controlling him, which is fine when you need to zing around large environments but not so great when MediEvil requires a concise puzzle solution.

Given that a physical copy of the original MediEvil goes for roughly $30 these days, shelling out the same price for a PS4 remake is a steal. A new coat of paint can’t inherently fix all of the issues with the original, but anyone with an open mind for kooky mascot platformer action will be pleasantly surprised with MediEvil.