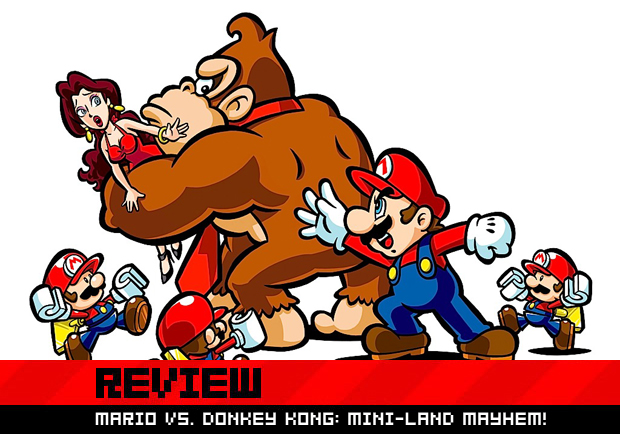 There was a time when I was desperate for more Mario vs. Donkey Kong. In the beginning, the series marked the return of the “real” Donkey Kong games, the one’s that I grew up with. For years, I had preached that Donkey Kong ’94 on the Game Boy was an under-appreciated masterpiece, right up there with Super Mario Bros. 3 and Super Mario 64, and that it deserved a sequel. When I finally got that sequel, it was one of those “maybe there is a God” moments in gaming that seem to come to me less and less often the older I get.

Case in point: Mario Vs. Donkey Kong: Mini-Land Mayhem. This game is not one of those “maybe there is a God” moments. Instead, it inspired more of a “maybe Nintendo really doesn’t care about its old school audience” moment when I first cracked it open. It was bad enough when Nintendo took the Mario vs. Donkey Kong platforming formula and ditched in favor of an indirect-control, landscape-building design with Mario and Donkey Kong 2: March of the Minis, but now they’ve given the game a sequel. Maybe the “real” Donkey Kong series really is dead. For an old softy like me, that’s pretty sad.

It’s not all bad news, though. After I got past my initial irritation with Nintendo for depriving me of another traditional Mario vs. Donkey Kong game, I found a lot to like in Mini-Land Mayhem!. Read on for the full review. 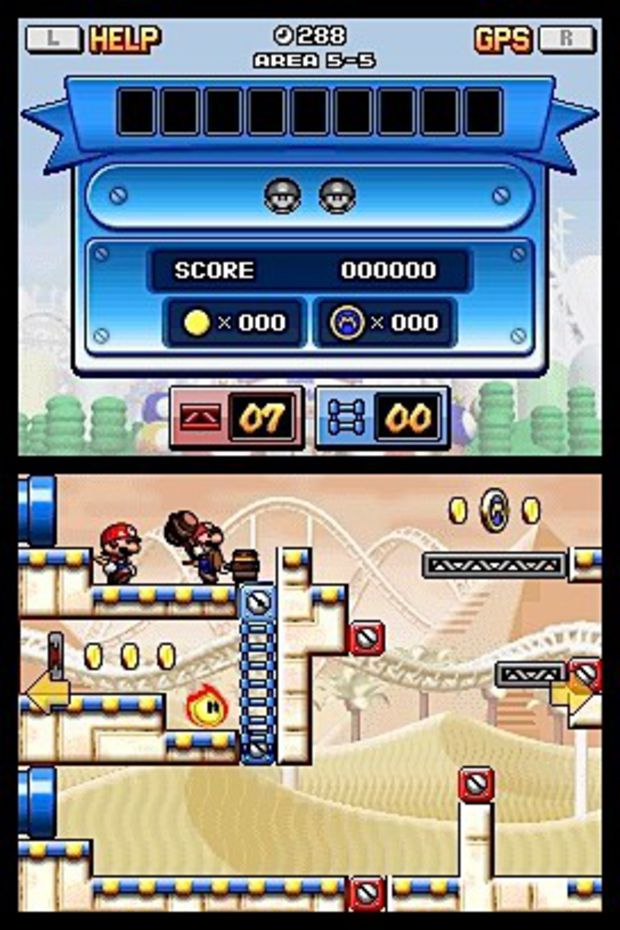 Mini-Land Mayhem! is more of a construction game than anything else. The game tasks you to build and rebuild levels on the fly, so that a small army of Mario character-shaped robots can get from point A to point B. Other than giving them an initial tap to get them moving, you don’t have any control over these narcissistic-inspired, animatronic versions of Mario and his pals. Instead, you must constantly manipulate the environment, building and erasing the world around you, in hopes to keep your robots alive and on the path to victory.

Sound like Lemmings? Yeah, you’re onto something there. The game isn’t going to score any points for having an original concept. Still, Mini-Land Mayhem! does well to upkeep Nintendo’s reputation for clever 2D level design. It seems that the game’s creators are always one step ahead of the player. They’ve done well to predict the many ways that you’re likely to try to solve each level, and have installed plenty of “Eureka!” moments for you to discover. 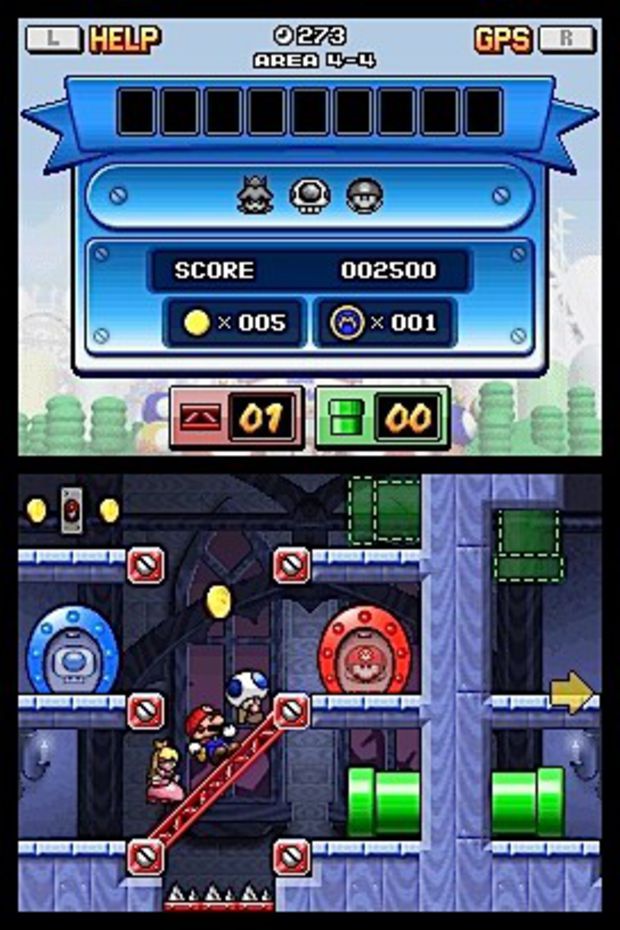 Most of those moments come from the game’s new tools. Each of the game’s eight “worlds” have a new type of object to interact with. The first world has you just building walls and floors for your robots to bump into and walk across. By drawing from one “nut” to the next, you can build walls and floors wherever you like, as long as you have enough material left to work with. Later on, you gain access to magnets, conveyor belts, springs and many other building blocks for propelling and directing your army of robots. These additions make each world feel like a whole new game, each with their own strategies and techniques to master.

The game offers a few other attempts to keep things fresh. There are unlockable mini-games, all of which offer a fun — but ultimately forgettable — diversion. Then there are the world-ending boss battles. To be frank, I didn’t enjoy a lot of them. Each battle has you using that world’s specific tool to take down Donkey Kong. That’s a good time in theory, but in practice, the game’s indirect character controls and boss level design often lead to these sequences coming off as overly slow paced and frustrating.

You’ll see Donkey Kong slooowly drop a barrel towards one of your robots. You’ll see that robot sloooowly walk towards the barrel, but because your resources may be allocated elsewhere, or because the robot is not around any tool anchors that you can immediately use to help them, there’s not much you can do to save them. Instead, you just have to helplessly watch as they get pummeled. It doesn’t happen in every boss fight, but when it does, it’s really annoying. 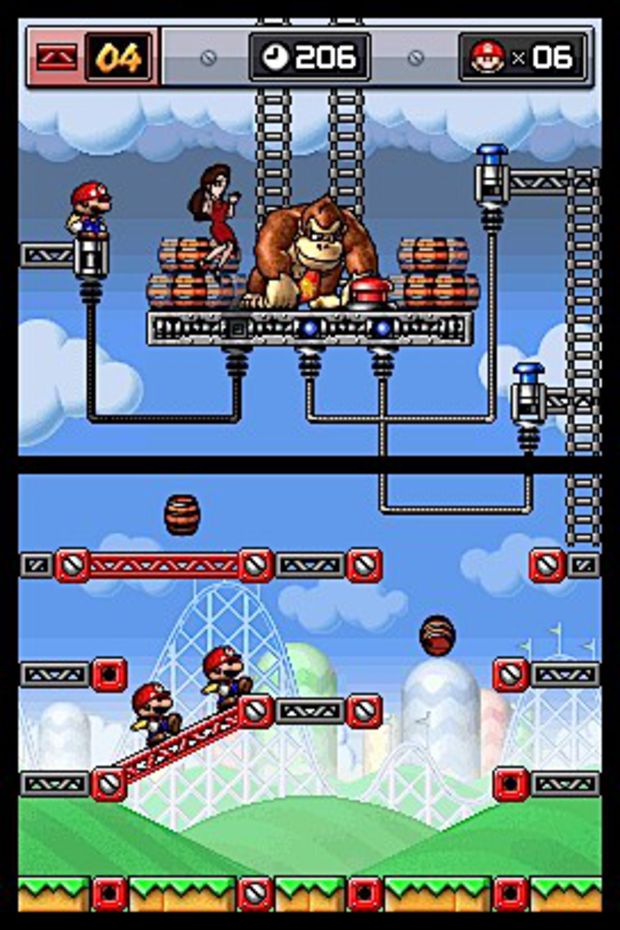 If some of the levels feel a little cheap, you can always just make your own to take their place. The game’s construction mode is by far its greatest asset. Using the tools that you unlock in the single-player game, you can create your own stages and upload them to Nintendo’s servers. The tools are incredibly well designed and are easy to use. If building isn’t your thing, you can also download new levels from Nintendo free of charge, or from other people via friend code swapping.

You can store up to 160 of these user-created stages on your cart. That’s a lot more game than you get with the on-cartridge content, and there are already some really clever stages ready for download. To help inspire better design, Nintendo has implemented a challenge mode where players are tasked to create levels around various themes, with the best of the stages put online for players to vote on. It’s a nice way to give would-be game designers some direction, as well as a forum for having user-created levels judged and appraised.

Some of you wont be up for any of that. In fact, some of you might not even be up for even playing this game at all. If that’s the case, Nintendo has you covered. The game has Nintendo’s patented “Super Guide” in place. Mess up enough times and you’ll have the option to have the game clear the stage for you. I know it’s old news, but I still think it’s pretty weird. I know that if Nintendo came over my house and ate some of my delicious cake “for me,” I sure as hell wouldn’t let them do it for free. Same goes with my videogames. If you play my games “on my behalf,” you’re effectively stealing the experience from me, right? That’s how I feel about the super guide. I feel like Nintendo should give me a little bit of my money back every time I use it, as that’s just a little bit less of the game that I get to play myself. 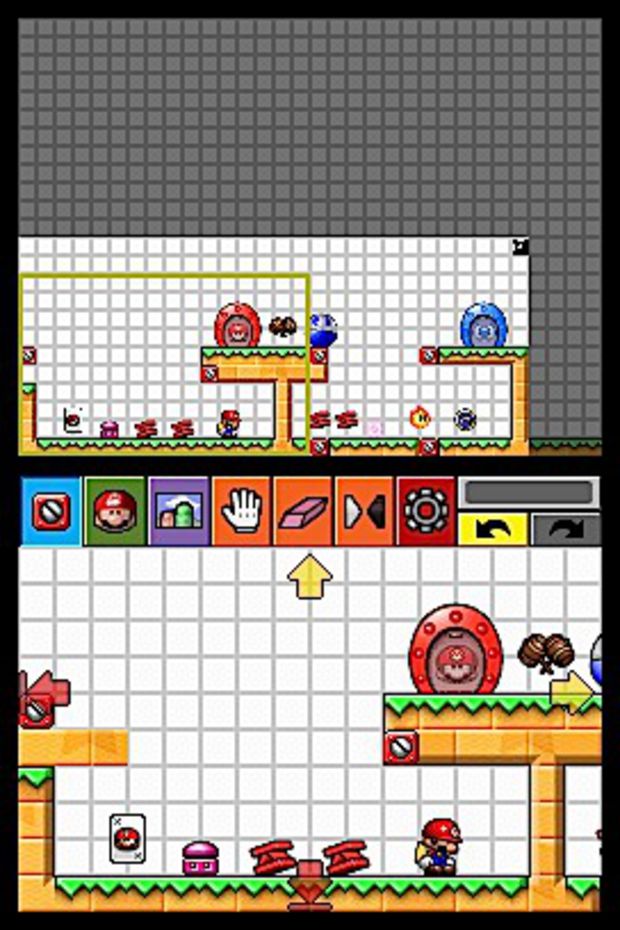 Of course, the super guide is completely optional, so it does nothing to tarnish my generally postive feelings towards Mini-Land Mayhem!. I’ll probably be checking in with this game again in a couple of weeks to download some new stages, just like how I still download new microgames in Wario Ware D.I.Y. every once in a while. I’m not that excited to play the game, but I am interested, and I do expect to enjoy it. In that way, I guess Mini-Land Mayhem! is like the famous American musical sitcom Glee.

It’s totally functional, well crafted, and serves its purpose well. If you’re a fan of musical sitcoms, or in this case, real-time construction games built around the Baby’s Day Out premise, then you’re going to get a lot out of this game. However, if you were looking for a traditional Mario vs. Donkey Kong platformer, or something beyond some solid level editing tools and 70 or so on-cartridge levels to puzzle over, you’re not going to be into this one.

Personally, I sit somewhere in between those two camps. For me, Mario vs. Donkey Kong: Mini-Land Mayhem! scrapes by with a…

[UPDATE] So, as a few of you pointed out in the comments here, I missed out on playing about 120 levels before I finished this review. I’m really sorry about this. I was so quick to jump into the review, I didn’t see that all those levels were unlocked after I  beat the game.

I’m adjusting my score accordingly, but not by much. These new levels really don’t change my overall opinion of Mini-Land Mayhem. A lot of these new (to me) levels are fantastic, but so are a lot of the earlier levels in the game. It would be one thing if one of my problems with Mini-Land Mayhem was that it’s too short. If so, then the discovery of these new levels would probably mean a lot more. The thing is, Mini-Land Mayhem! is anything but “short”. With a potentially infinite stream of user created content, the game is basically endless anyway, regardless how how many levels you unlock in the main campaign.

I think Mini-Land Mayhem is “only” good because compared to other available games in the genre on the DS, it’s just not that special. It didn’t make me feel much, or think much, or have much of a memorable effect on me at all. That’s not to say that the game is bad, or that I think that people aren’t going to like it. Just like the “Good” descriptor says, this game definitely has an audience, and for a lot of you, I’m sure that it’s absolutely worth buying.

That said, I still think it’s safer for you to demo this game before purchasing it. I know that’s the advice that I would want if I were considering buying this game.