The prospect of Mario and Sonic appearing side by side in the same videogame was once a near-unthinkable fantasy. But it happened. Thanks to the demise of Sega’s console business, the bitter rivals eventually put aside their differences and joined forces to create a novel assemblage of Olympic sports minigames for the Nintendo Wii.

That was six years ago. In the interim the unlikely pairing has since spawned a biannual franchise with three entries across as many systems. And like clockwork, just in time for February’s international competition, the iconic mascots have reared their heads for fourth. 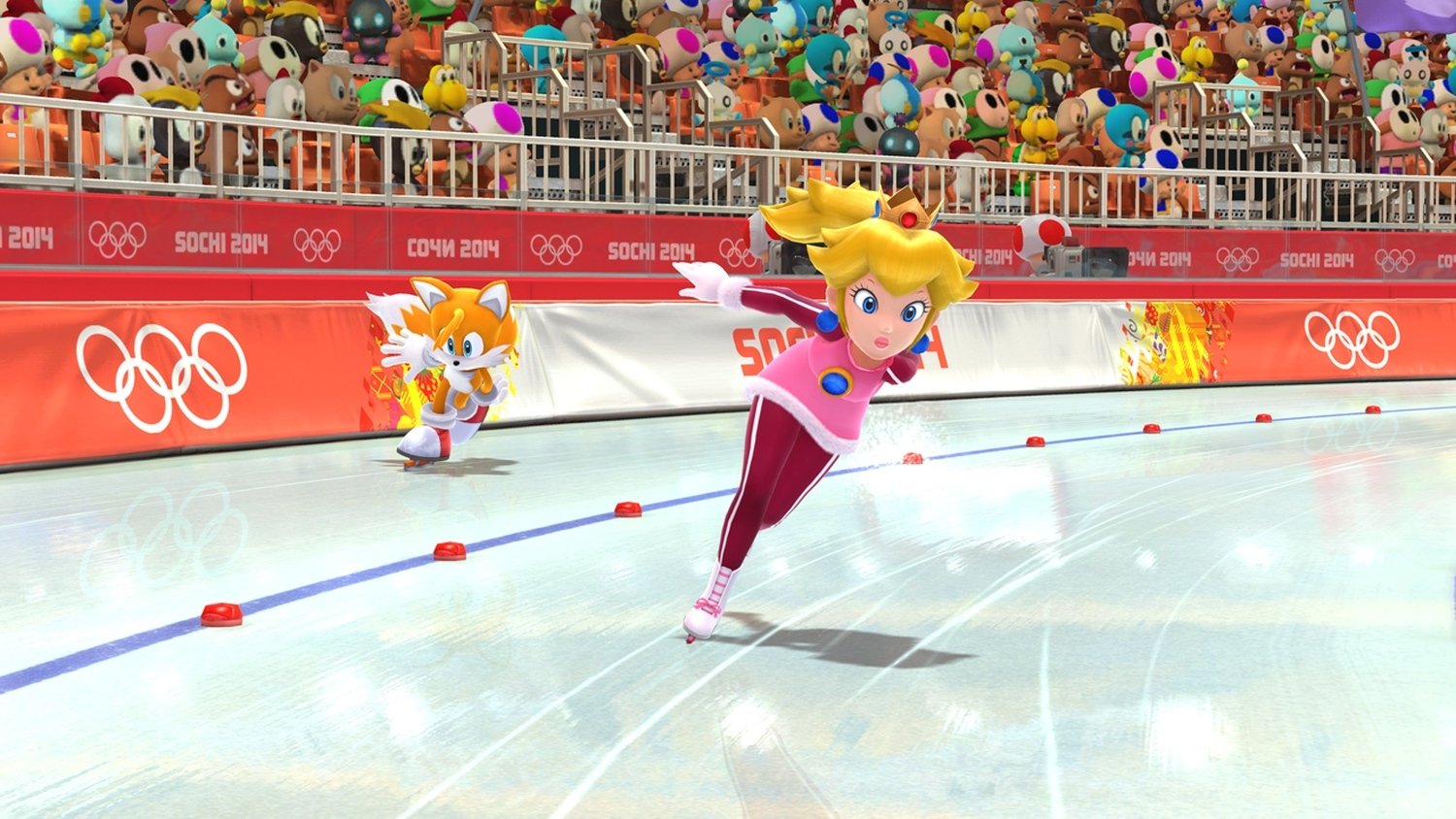 Hot on the heels of their recent summer excursion in London, the star-crossed companions now take to the icy slopes of Sochi Russia in the series debut on Wii U. The new hardware and controller provide ample opportunity for reinvention. Unfortunately, the title stumbles out of the gate, ultimately producing a performance that isn’t quite indicative of its level of talent or potential.

Mario & Sonic 2014 features sixteen events across ten sports, including: skiing, skating, snowboarding, hockey, bobsledding, biathlon, and curling. Along with the eight Dream Events, there are two dozen activities to compete across. For better or for worse, veterans from Mario and Sonic’s trip to Vancouver will be well-acquainted with a lot of the content on offer.

Despite boasting fewer activities than its predecessor, all the quintessential winter sports make a return. And while some of that familiarity is welcome, it would have been nice to see Sega Sports be a little less conservative. Nowhere is lack of progression more evident than the character roster, which remains unchanged from the previous pair of outings with the exact same twenty faces. 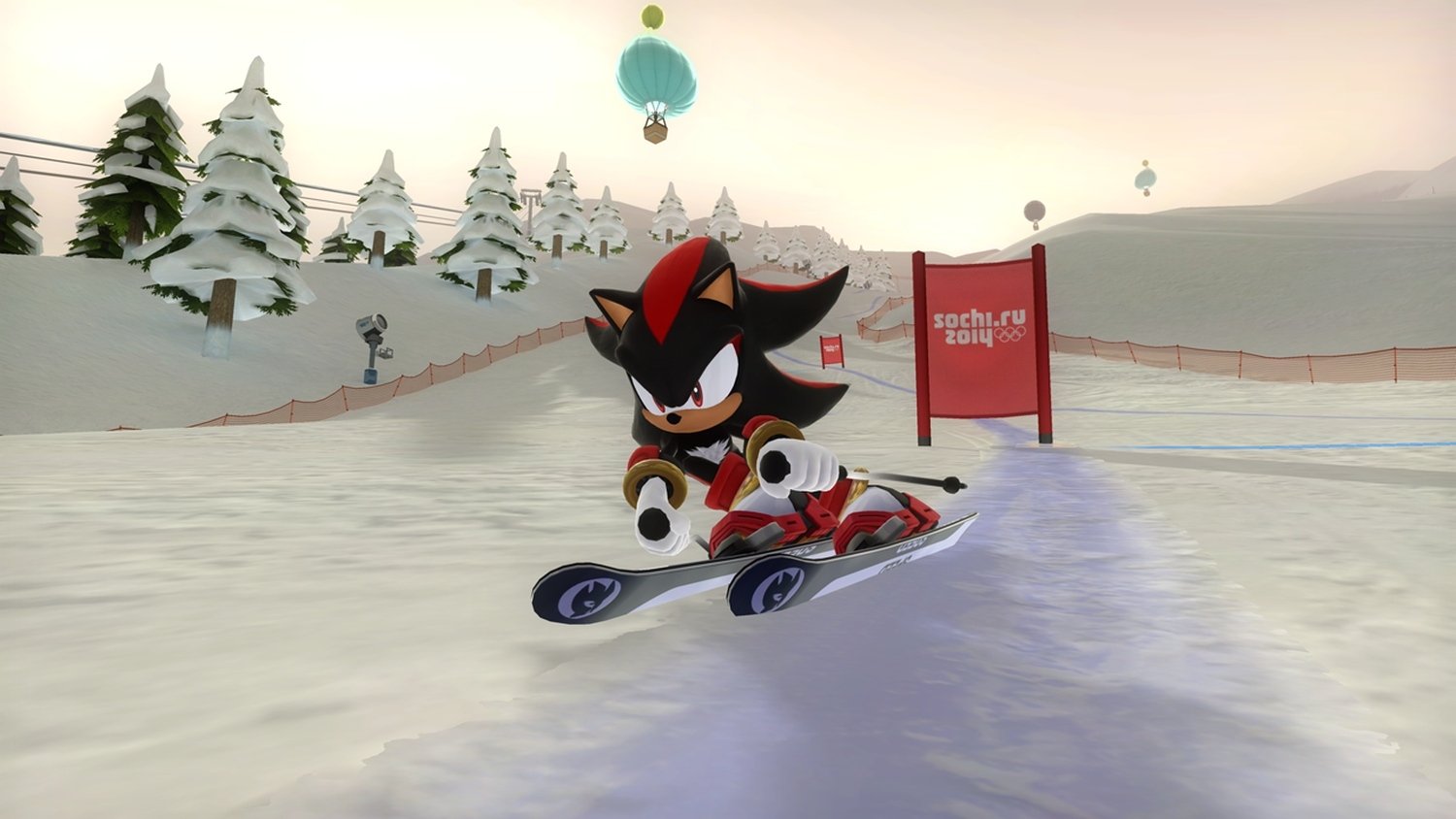 The most obvious addition is Wii U GamePad support, and it has some brilliant uses. In bobsledding, for example, the player can use the second screen to view the event from a first-person perspective whilst tilting and weaving through the icy passageway. Hockey sports a special power shot feature where players can draw the arc of the shot on the touchpad.

Other usages aren’t as inspired. Snowboard tricks are also performed with touchpad swipes, but it’s just a simplistic back and forth motion that determines the number of aerial rotations occurring in a jump. A large number of events omit the GamePad entirely in favor of the Wii Remote Plus. It’s quite a shame and leads to some awkward shuffling of controllers between events. The worst offender here is the biathlon, which isn’t a horribly inelegant experience requiring players to swap between input methods on the fly.

Events themselves are arcadey and pretty fun once they get going, showcasing simplistic inputs largely based around motion controls. The experience can get bogged down though. Since there isn’t a lot of complexity involved, players will likely find themselves flipping from sport to sport in search of new thrills. Sadly, the game is heavily tutorialized, crammed full of unnecessary menus, and requires players to recalibrate Wii remotes every time you want to try something new.

Another notable addition is online multiplayer, which seems adequate enough in practice. The real bummer here is not the functionality, but the lack of diversity. There are only four events, all of which involve racing. Curling or hockey could have been a lot of fun with friends.  There’s an under-realized campaign wherein players face off against doppelgangers and a trivia mode to spice things up. However, by far my favorite aspect of the package is the Dream Events, which bring a sense of levity that a game full of colorful cartoon characters absolutely demands.

In contrast with the more realistic activities, the Dream Events are totally off the wall. Grove Pipe Snowboarding and Roller Coaster Bobsleigh are both very reminiscent of Mario Kart, while Hole-in-One Curling provides an interesting take on Frisbee golf with one player flicking the GamePad and the other riding a giant stone down an icy hill to a target area. Bullet Bill Sledge Race evokes Star War Episode I: Racer, substituting the pod for a sled and the engines with the eponymous Bullet Bills. There’s even a (admittedly kind of lame) third-person shooter that centers around capture the flag and slinging snowballs. 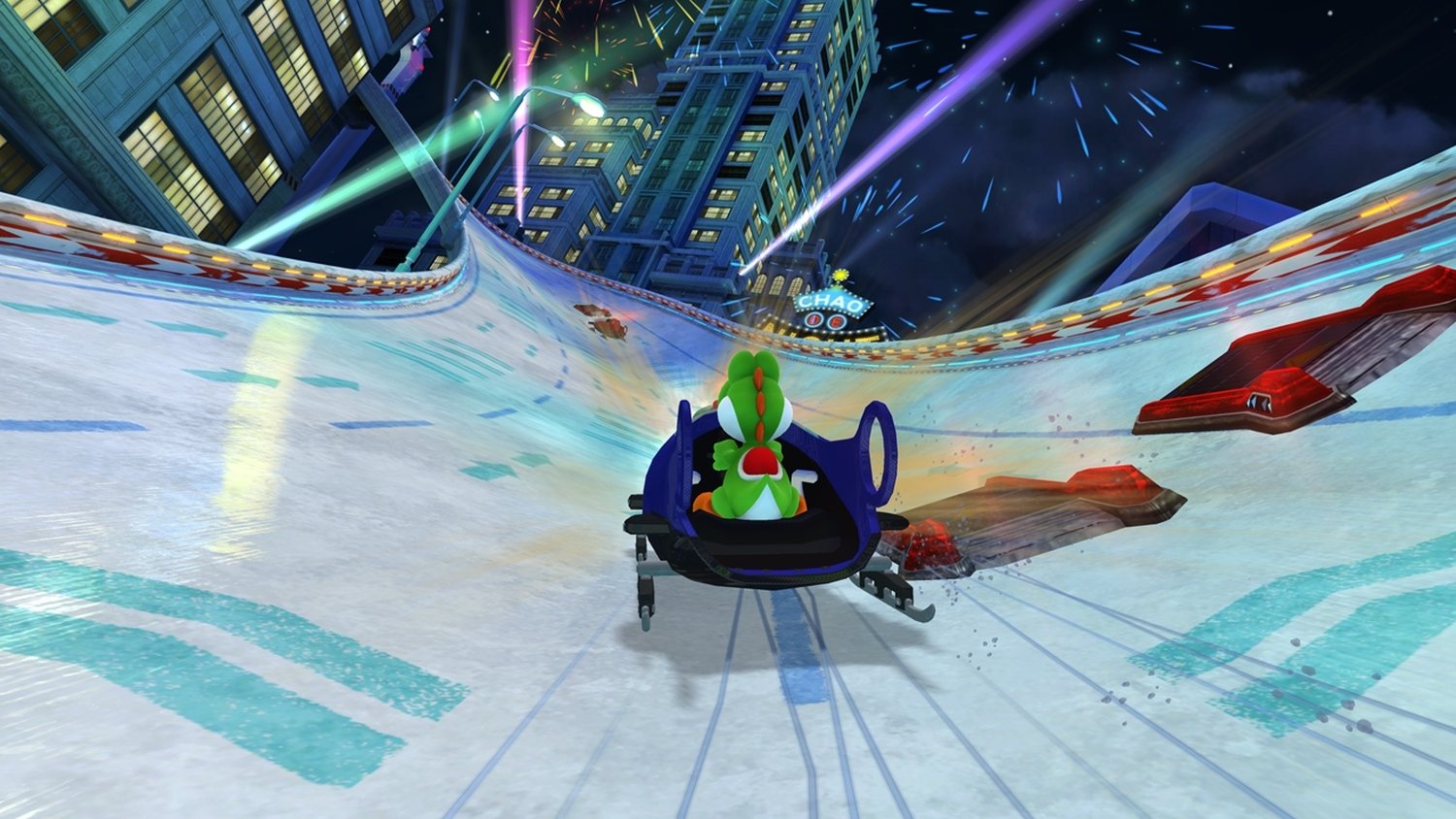 At it’s core, Mario & Sonic 2014 is fairly competent at what it does, but never manages to be outstanding. There are some clever ideas hidden in there, amongst some shiny visuals and the occasional design headache, but it never pushes the boundaries far enough to be especially unique or interesting. And that’s a shame because there isn’t a lot of depth here to keep players engaged outside of the extrinsic sense of competition provided by playing with friends.

Mario & Sonic 2014 is a decent party game, but it isn’t going to win any medals.