A kingdom has been overtaken by a substance known only as the Darkness, which envelops living beings and turns them into mindless, nigh invincible soldiers of evil. Tepeu, a young thief who can talk to animals, steals his way into this kingdom to protect his own home from decay.

Once in the kingdom, he discovers an ancient power that has been hidden away by the Darkness, a creature known as the Majin. Together, Tepeu and the Majin must work together in order to destroy evil, rescue the kingdom, and get the girl.

Oh, and they also get to star in an incredible videogame! 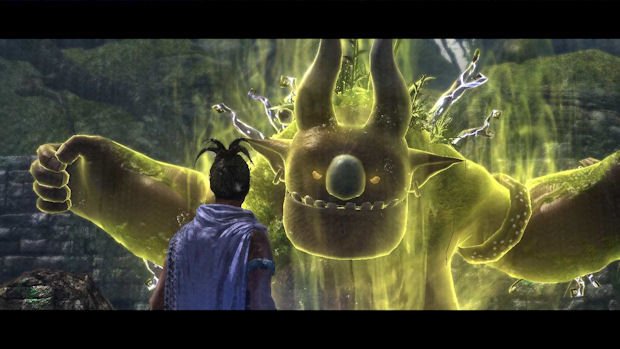 If there’s one word I would use to describe Majin and the Forsaken Kingdom, it would be “delightful.” From beginning to end, Majin is a game designed from the ground up to make you smile, and in that respect, it is a magnificent success. A charming and compelling experience, if any game this year could be considered heartfelt and genuine, then this would be it.

Majin and the Forsaken Kingdom takes the form of a third-person adventure game. Playing as the thief Tepeu, your job is to stop The Darkness (not the Justin Hawkins variety) that has enveloped a long-forgotten realm. Tepeu on his own is an ineffective warrior against the forces of decay, but that’s why he’s joined by the hulking Majin, Teotl.

Using some very simple and intuitive commands, the player can make Teotl perform a variety of tasks, all of which will be essential. Although combat is a big part of the game, Forsaken Kingdom‘s major focus is on using Teotl’s skills to solve a variety of environmental puzzles. As the game progresses, the Majin will acquire wind, fire, lightning and purification spells, all of which are both useful in combat and essential in traveling through the Forsaken Kingdom. 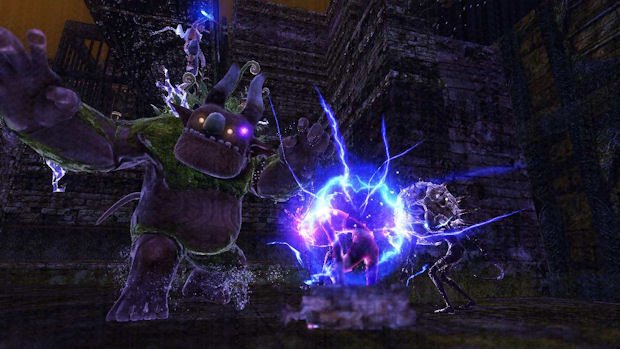 The title bears some similarities to The Legend of Zelda. Although there’s no strict definition between an overworld and dungeons, the way in the which the game is structured, with the ability to freely roam around the entire map and backtrack with new skills to explore previously treacherous terrain gives it an open-ended feel, and the way in which Teotl gains fresh abilities and uses them to take on the game’s increasingly bizarre bosses is highly reminiscent of Nintendo’s classic franchise.

While there’s a little bit too much backtracking, the environments are pretty enough to get away with it, and it’s always fun to earn a new skill, such as Fire, and then use it to suck up flames that were blocking a path in an earlier section of the game. The game really could have been helped by a better way to fast travel around the map. There are “transport” rooms dotted around the map, but there are only five of them, two of which aren’t unlocked until the penultimate boss has been defeated.

The environmental puzzles are never overly taxing, but they’re all rather clever and make such great use of Teotl’s skills that he constantly endears himself to the player through his in-game actions. That charm is sometimes strained by the occasional bit of spotty AI, but he remains an effective partner on the whole, who will respond to commands efficiently and often rather adorably. 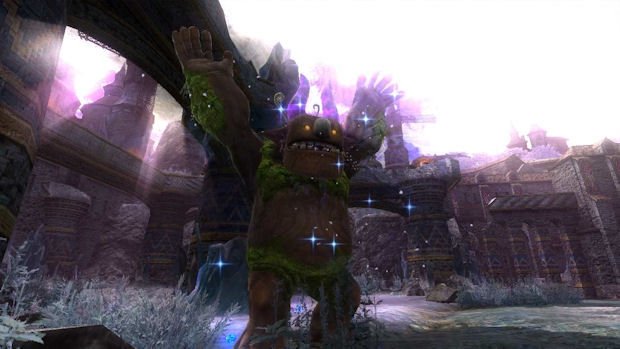 Combat is a very interesting affair, in which the Majin does a lot of the work, but the player is never left idle. Tepeu’s attacks are comparatively weak but the player character is an essential component to every fight. While Teotl smashes enemies around, Tepeu can throw rocks at enemies to distract them, or find gunpowder barrels and traps to damage or stun foes. Keeping Teotl safe while avoiding damage yourself can sometimes be a tricky prospect, but each fight is satisfying and tense, especially when the bigger, deadlier enemies appear.

Of course, Tepeu can also get stuck in with the fighting, and he can command the Majin to use his magical abilities for an extra kick. Attacking a downed foe or an enemy stunned by magic often opens the way for a powerful combination attack, in which Teotl and Tepeu will combine their strength to finish off an opponent. Simply pressing B initiates a combo, and rewards the dynamic duo with Friendship Shards. As more shards are gained, the bond between the two players increases, leading to new moves and more powerful attacks.

As well as straight combat, several major fights can be won by using the environment. At various points in the game, the Majin can be commanded to push against walls or boulders, knocking them into the soldiers of Darkness for instant death. Often, it will be Tepeu’s job to lead the enemy into the trap, which never gets old. There are also simple stealth elements to the game, where Tepeu can sneak up behind unwary soldiers and execute them from behind. If the Majin isn’t nearby to suck up the Darkness’ soul, however, enemies killed in this will to come back to life after a couple of minutes. 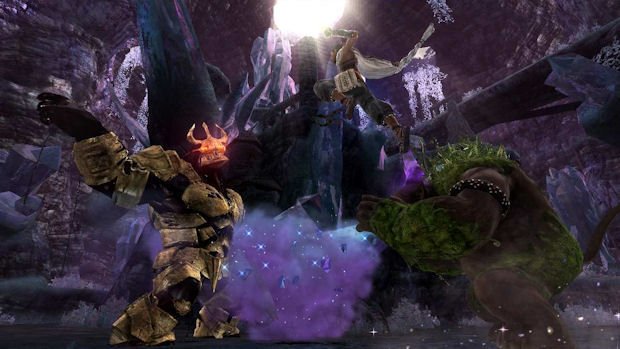 Game Republic have done a tremendous job of making Teotl important without marginalizing the player’s own input. Despite the fact that you’ll be commanding the Majin to perform actions, you’re never left without a job of your own. The player will be sneaking, jumping, climbing and attacking throughout the game, all the while fighting to keep the Majin safe and healthy just as much as the fights to do the same for you.

Majin and the Forsaken Kingdom is full of neat co-op gimmicks, but it never oversuses them. You won’t be pushing walls onto enemies over and over again. In fact, I’d argue that many of the game’s gimmicks aren’t used enough. I’d have loved more opportunities to roll boulders onto Darkness soldiers, or drop exploding barrels on their heads. Major kudos are to be had, however, for focusing on variety over repetition.

The game will take over eight hours to beat, and more play time can be had through exploring the gorgeous environments. Majin and the Forsaken Kingdom is full of stuff to find, from “Memory Shards” that bestow rewards on Tepeu, to hidden chests containing XP for Tepeu’s strength/stamina and costume items that change the character’s appearance and confers unique abilities. The costumes are especially cool, and I wish the game had many more of them on offer. I beat the game in thirteen hours, and was able to acquire all but one of Teotl’s stat upgrades while missing quite a few costume pieces and unknown items. If you purchase games based on length, then this one has enough content for you. 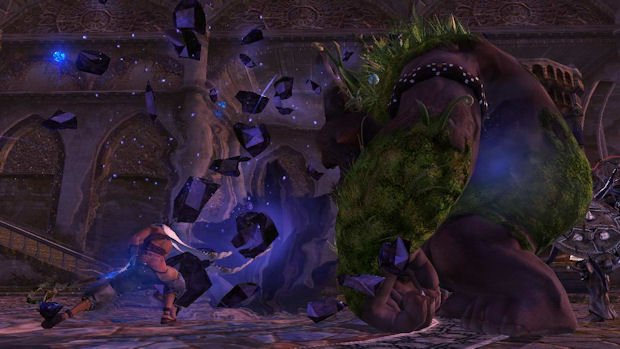 There are a few issues with the game that hold it back from perfection. Animations are sometimes clunky, especially in the hit detection area. It makes a few relatively simple jumps far more difficult than they should be. A number of the game’s canned animations slow down the pace of the game, too, and sometimes directly affect the combat. One boss fight, for instance, is made more difficult because Tepeu repeats the same sluggish animation every time he prepares a certain attack. The irritating “running out of breath” animation that occurs whenever Tepeu sprints for too long could have safely been abolished, too.

Although the animations can often feel clunky, the game’s visual style is absolutely gorgeous and more than makes up for it. The soldiers of Darkness are especially fantastic, constantly dripping with a black, sticky tar-like substance that makes their feet stick to the ground as they walk. As Tepeu takes damage, he slowly becomes enveloped in this substance, and I found myself actually enjoying getting attack just to see the amazing effects. Makes me wish that we gave out awards for the best “gloopiness” effect in a game, because this would win by a mile.

Despite a few issues with AI and animations, Majin and the Forsaken Kingdom is an absolutely superb effort from Game Republic. It remains charming and sweet without ever becoming cloying or twee, with a genuinely interesting story and a wonderful character in Teotl. The gameplay feels at once traditional and unique, and the overall experience is both remarkable and memorable. No other game released this year has quite so much heart as this.

It truly is one of those special games that not many will discover, but those that do will fall in love with it. Like I have.