There’s a team called the ‘Redskins’ in this game, which is super racist!

Madden 15 on PS3 and 360 is bad garbage that EA shouldn’t get away with releasing.

Alright then, onto current-gen. 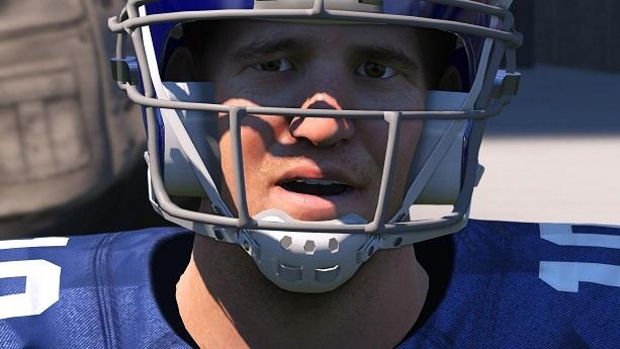 It is interesting how strong perspective is at making Madden NFL 15 brought to you by Under Armor™ Dental Dams (Protect THIS house!) feel different. It’s a trick, really. The new default camera zooms in and angles more towards your players’ line of sight than Tim Tebow’s God’s bird’s-eye view. Thankfully, the camera angles can be adjusted via the directional pad and you can go right back to that series standard view and think, “Good, things are familiar and that makes me feel safe.”

If you are feeling radical, though, try out the new defensive camera (while on defense) for a third-person, behind the back angle from your defender’s point of view. I also recommend locking yourself as that player so as to avoid disorienting camera angles when you try to shift to a DB after a throw, unless you must get every hit yourself (fumbles are in vogue this year).

Me, I mostly stuck to playing on football’s best defensive line (St. Louis). Hitting sprint at the snap gives you an indicator of your timing (“perfect” or “late”) and now you know one button is for finesse moves and to disengage, one button is for power moves. This new camera does make defense fun. Piling up three to five sack per game (with one player) is fun, though maybe cruel.

The defensive view can gum up Madden NFL 15 brought to you by Tang™ (make SPACE in your pantry), particularly when opponents are running the hurry up. Rather than default to your last play (on offense or defense) and requiring you audible out, the hurry up zooms in on obscuring close ups of the quarterback and offers you three other plays (like the traditional play call screen), or the option to opt out and return to your original play. You have to pick one of these four options before you can see all the players lined up proper. Occasionally this led to, when I finally got back in position, the camera view switching back 180 degrees, which is disorienting. A couple times I found myself offsides.

Small price to pay, though, for making defense fun. The close up perspective, combined with a tackle cone (like the QB vision cone, but good) also makes it easier to judge distance, not whiff on tackles, or effectively disengage a blocker to drag down a running back (or mobile QB).

The other thing Madden NFL 15 brought to you by Bengay Spermicide™ (Nukes the swimmers AND burns the glans!)  does right is offer a decent, albeit annoyingly branded Skills Trainer, which it forces you into immediately (though you can skip it). Combined with additional information on the play call screen (suggestions for what type of plays work against what types of defense, notes on how often team’s run certain sets on certain downs and distances, etc), there’s a decent attempt at teaching new players the systems, buttons and rules of football. 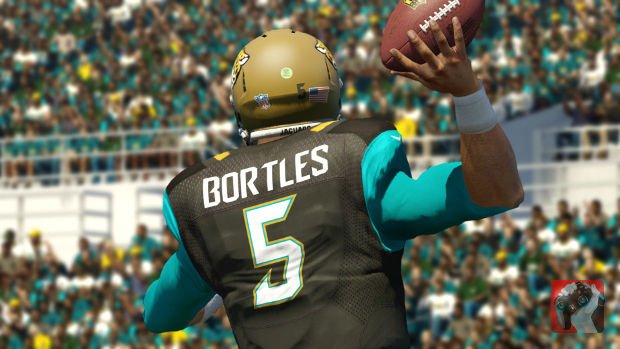 Then of course there are niggles and legacy issues. Defensive backs are turned up in the Richard Sherman era, making a lot of picks, especially undercutting shallow routes. This is partly because receivers (still) won’t try to muscle toward the ball. The only time I remember one coming to the ball was when he was sitting — completely uncovered — in a curl route in the endzone. The one time I want a receiver to sit there and catch the ball, he ran out of the endzone (on 4th and goal) to catch the ball, locking me in an animation and leading him to get tackled before I could turn him back into the endzone.

The first thing I do in Madden brought to you by Verizon Wireless Prison Cells™ (Your inmates will be LOCKED IN to these plans!) is go into the settings and turn the commentary volume off because it is (still) horrible. At least it is a passive assault on the player. Worse is the forced pageantry, the “presentation” elements that slow the game for no reason.

Halftime is one of the parts of football nobody likes because football isn’t happening. Why don’t you put a commercial after a touchdown, then another 15 seconds later after the 2 yard kick return while you’re at it? (Please, don’t.) 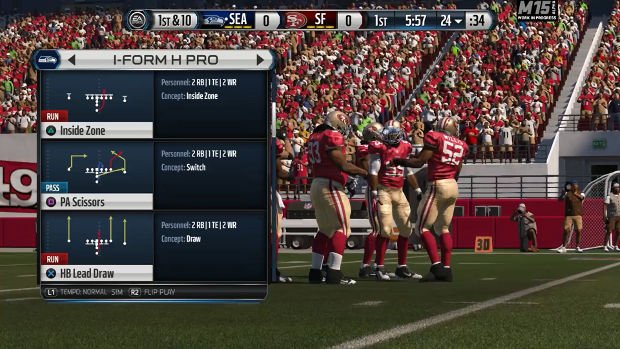 NFL Blitz just had an Extra Point play that you’d press and it’d immediately say “Here’s another point!” for a second and then the opposing team would already be receiving a kick off. You don’t have to be that quick, but show some hustle. I’m sorry some underpaid, under stimulated artist had to realistically render Andy Reid’s mustache bristles, but I don’t ever want to look at him.

Madden NFL 15 brought to you by Crazy, Concussed Joe’s Discount Corporate Billionaire Wig Refinery™ (We PASS the shavings onto you!) also makes a big deal about putting quarterback accuracy “at a premium,” but I ran into the weird happening of QBs, even junk ones, regularly fielding completion percentages in the 90s against me. Maybe all the sacking and run-stopping led to too many short, high completion percentage plays, but I found it odd how I’d dominate games, but the opposing QBs would be 19/20. And I, rarely using top QBs, didn’t have accuracy issues (just hawking DB issues). Actually felt a little easier to put certain kinds of touch on the ball.

Mostly, offense feels the same. Running on friends seems to work fine, but running on the computer is a nightmare unless you a) do the bad-football-thing of running laterally and turning a corner up the sideline, or b) catch the defense in a bad set and then no-huddle call the same play over and over, picking up ten yards at a time and going all the way down the field. You don’t have to be Jon Bois to break Madden. Someone already figured out how to stand still and not get tackled for over a minute. More will come. I also recommend leaning on tight ends, five wide sets, and general open field manic running (nothing as bad as playing against old school Mike Vick, but, still). 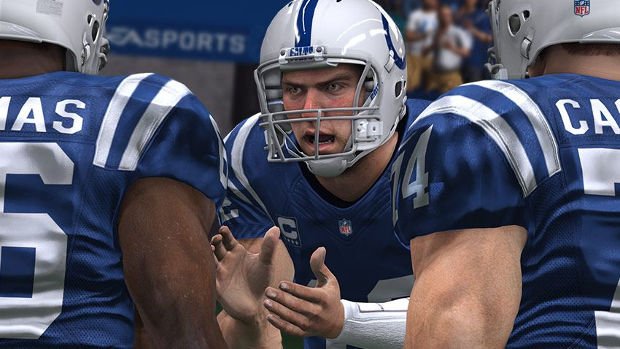 I still want nothing to do with microtransaction-laden Ultimate Team. Connected Careers is still dull in Owner Mode (halfhearted management sim) and filled with unnecessary gimmicks in the rest (don’t worry about Confidence, just dump XP direct into player stats and win games). Load screens and game sims are still long (I don’t even watch the pre-season; I don’t want to play it), though at least the cluttered UI doesn’t hitch at every button push in the PS4 version like it does in the PS3 version (makes upgrading players and everything else a nightmare on last gen).

Madden NFL 15 brought to you by the NFL’s classist, uncaring, voracious appetite for profit and general moral failure as a multi-billion dollar business built on the backs of broken, mostly forgotten workers™ takes its existing defensive framework and makes it not suck. This lets me hit quarterbacks more and release the aggression that wells up when I see any of the in-game advertisements. The rest is Madden 25, but less hideous.