I came into Lost in Random knowing surprisingly little about the game or its stop-motion-inspired dark-fairytale world, but I liked the look of it at a glance, and I feel like EA has a good thing going with its EA Originals line of games. I mean, I dug Unravel (especially its co-op sequel). I had fun with A Way Out (and even more fun with It Takes Two).

For those of you who got a kick out of Fe — or any of Zoink’s other titles, including Flipping Death and Stick it to the Man! — there’s precedence here.

Me, though? I’m new to Zoink’s antics. I don’t have a strong sense of the studio’s DNA, where it’s been, and where it’s going. That said, I hope Lost in Random is just the start of something. While I’m ultimately satisfied, I don’t want this to be a one-and-done deal.

If I had to sum up Lost in Random‘s whole vibe, I wouldn’t invoke you-know-who; not necessarily. Instead, I’d point to the works of director Henry Selick in general: The Nightmare Before Christmas, sure, but particularly James and the Giant Peach and Coraline.

In other words, this is a game that’s both twisted and lighthearted; heavy when you stop and think about the big picture, but not overly high-stakes in the current moment.

The premise of this dice-slinging action-adventure game is that a sinister Queen rules over the kingdom of Random. There are six different sequentially named realms, each with their own quirky ways and strange citizens who have settled into the not-exactly-ideal way of the world under her rule. On a child’s twelfth birthday, the Queen rolls her magical die — the only one of its kind after the other dice were outlawed — and depending on the outcome, the kid is forced to live in one of the six realms.

Some towns are definitely better than others. Our protagonist, Even, and her sister, Odd, are residents of Onecroft — the dark and dirty bottom rung of Random.

But on her birthday, after rolling a six, Odd is shipped off to serve by the Queen’s side in her hush-hush palace. After all of the table setting, Lost in Random picks back up a year later, when Even follows a mysterious ghost, discovers a sentient die she calls Dicey, and embarks on a grand adventure to rescue her sister. But does she even need rescuing?

Even though I like Lost in Random‘s combat quite a bit (which I’ll delve into in-depth, because you’re bound to have questions), its greatest asset is its just-zany-enough world, lore, and characters. There are a lot of oddballs, and they’re a chatty bunch.

Even if you latch onto the inspirations here and there, overall, it doesn’t feel too derivative. Yeah, there are wolf-people, a few small-handed weirdos straight out of Nightmare Before Christmas, and yeah, the grim reaper shows up at one point — but there’s also a leather-fleshed Shadowman with a creepy grin, a towering mayor who’s got a vile upside-down scarecrow growing out of his hat, and a dear old soothsayer who can “read” rugs.

With lesser pieces in play, Lost in Random‘s format of going through each of the six realms, in order, could easily grow stale. We don’t like games that are too linear. (Do we?) 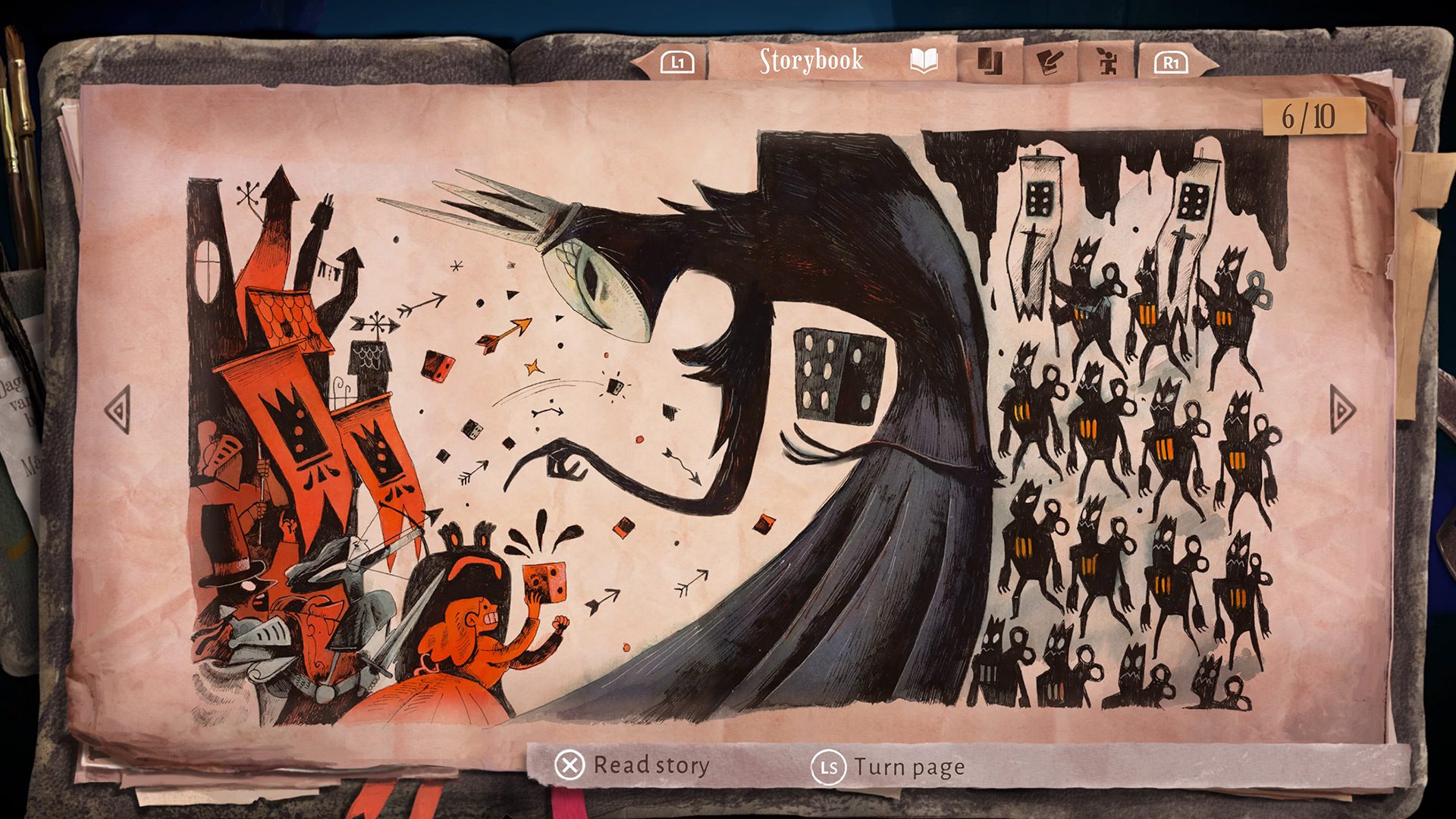 In this case, there was enough variety and intrigue to the worldbuilding that I was always wrapped up in my surroundings while also wondering what might be up next.

I don’t want to say too much about the six regions — the “what’s next?” anticipation factor is a big part of the game’s appeal — but Zoink does a good job of theming each world after its numerical, dice-based namesake. There’s an amusing logic to how each realm operates. Seeing those quirks play out as Even, a total newcomer, is pretty entertaining. Some but not all of the towns feel like 3D platformer hubs, albeit without any actual platforming. You’ll roll into town to get a lay of the land, chat with the locals, and solve their problems, ultimately carving a path toward the Queen and your sister.

There are really two distinct halves to Lost in Random: the exploration — which is largely about making sense of your sprawled-out surroundings, finding crucial (and optional) NPCs to chat up, and smashing lots of pots with your slingshot to collect a bit of currency — and the combat, which manifests in specific arena-like locations along the way.

To be clear, the battles aren’t random encounters — there’s a set amount of them. 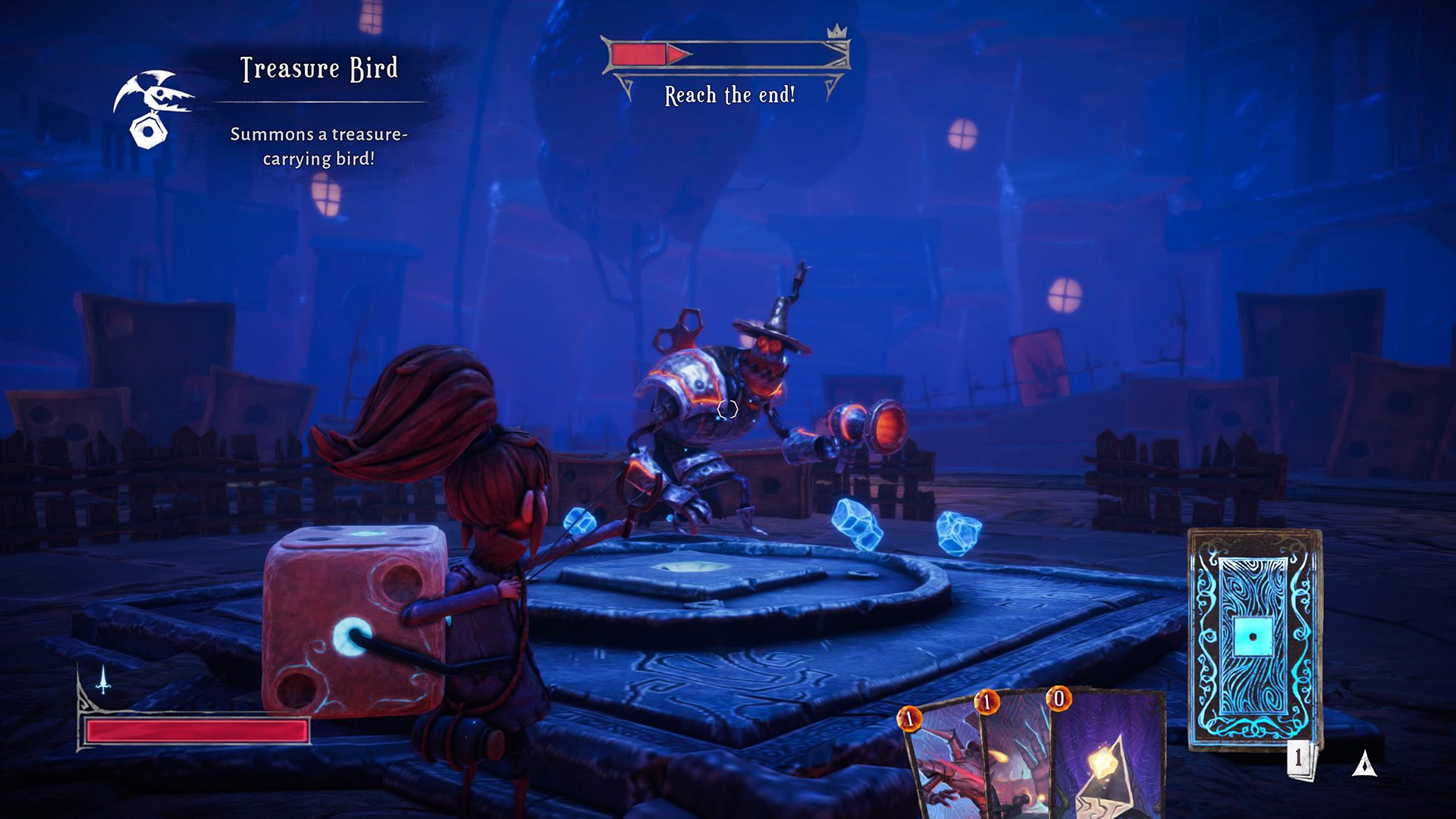 Lost in Random uses cards, and you will assemble a customizable deck, but I should say that as a (usually) card-game-averse player, I really liked them. The actual fights against the Queen’s army of robots play out in real-time — mostly. Using an okay-feeling slingshot, you’ll aim for glowing protrusions on the droid’s bodies, which causes collectible bits of energy to spill out onto the arena. Your adorable companion, Dicey, can scoop them up, and by doing so, you’ll generate/draw cards from your deck. The cards come in a few categories: some are straight-up weapons like a lance or hammer, some are traps that you can physically place on the field, like a giant hand, and some are used to heal Even.

Until you’ve got cards ready to go, it’s pretty much just a loop of running around, dodging attacks, and lining up shots with your slingshot. The glowy spots regenerate on the robots after a while, and you’re often facing several enemies at once, so you’ll never run out of “card energy” to collect. You can tell Dicey to run out toward a target (which is useful for having him grab energy), or you can simply have him sit on your back, which is what I did most of the time. Worth noting: Dicey can’t get hurt. You only have to worry about Even.

With enough energy to play a card (or cards), you can roll Dicey, at which point the combat pauses but you can still run around to position yourself or set up traps — it won’t resume until you land an attack or manually unpause it. Each card in Lost in Random has a different value, so if you roll a three, you could afford to play a basic sword card (one point) and a bomb (two points), but not a more powerful (and expensive) explosive bow and a bomb. 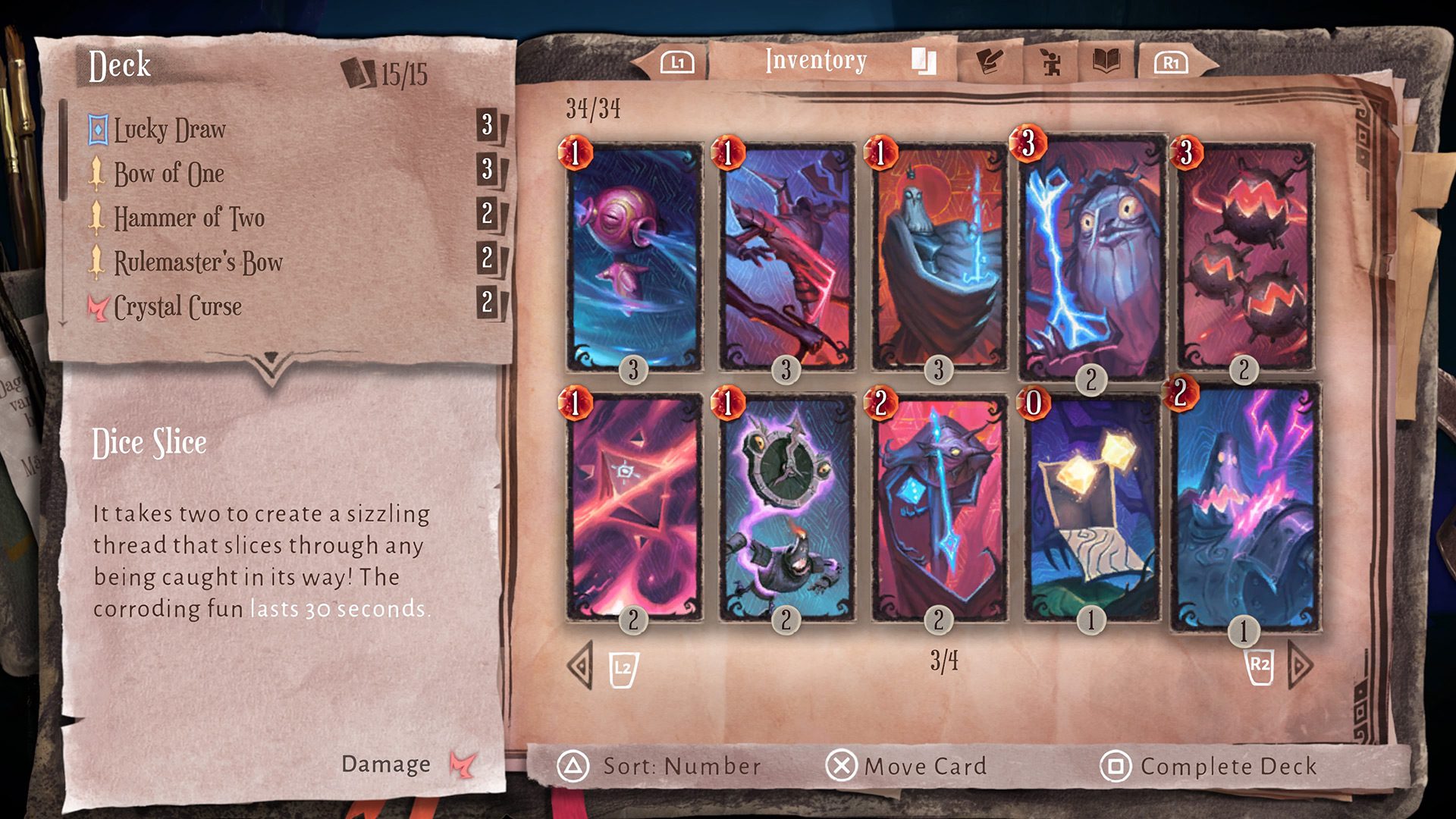 Still with me? Once I got into a groove and unlocked enough pins at the shop to be able to save (hold onto) specific cards between each randomized draw during battles, I built out my deck with a mix of costly melee, ranged, and healing cards. I’d also include a few cheeky “free point” cards — they straight-up increase the total of Dicey’s current roll, which goes hand-in-hand with the pin system — and a trap or two. One of the cards creates a laser between Even and Dicey, and it just chews through beefy foes. It rules.

As you journey through the kingdom of Random, you’ll earn new cards through the main story and sidequests, and regularly buy more of them from a mystical recurring merchant fellow who reminds me of the Duke in Resident Evil Village. You can stack your deck with duplicates (to improve your odds of drawing what you want), and I recommend it.

Occasionally, there’s a board-game twist where your Dicey rolls also impact a moving playing piece that usually has to get from Point A to Point B to conclude the skirmish. These were interesting enough gimmicks, I just wish the robot army had more going on.

In a few instances, Lost in Random can get tricky with tight quarters and not enough room to dodge everything surrounding you. Overall, I liked the challenge; it tested me. If you’re struggling, there is an easier “story” difficulty option buried in the menu. I didn’t try it out, but there were distinct spikes where I remember thinking that a younger player might struggle. You’ve gotta be proficient with Even’s dodge cooldown toward the end. 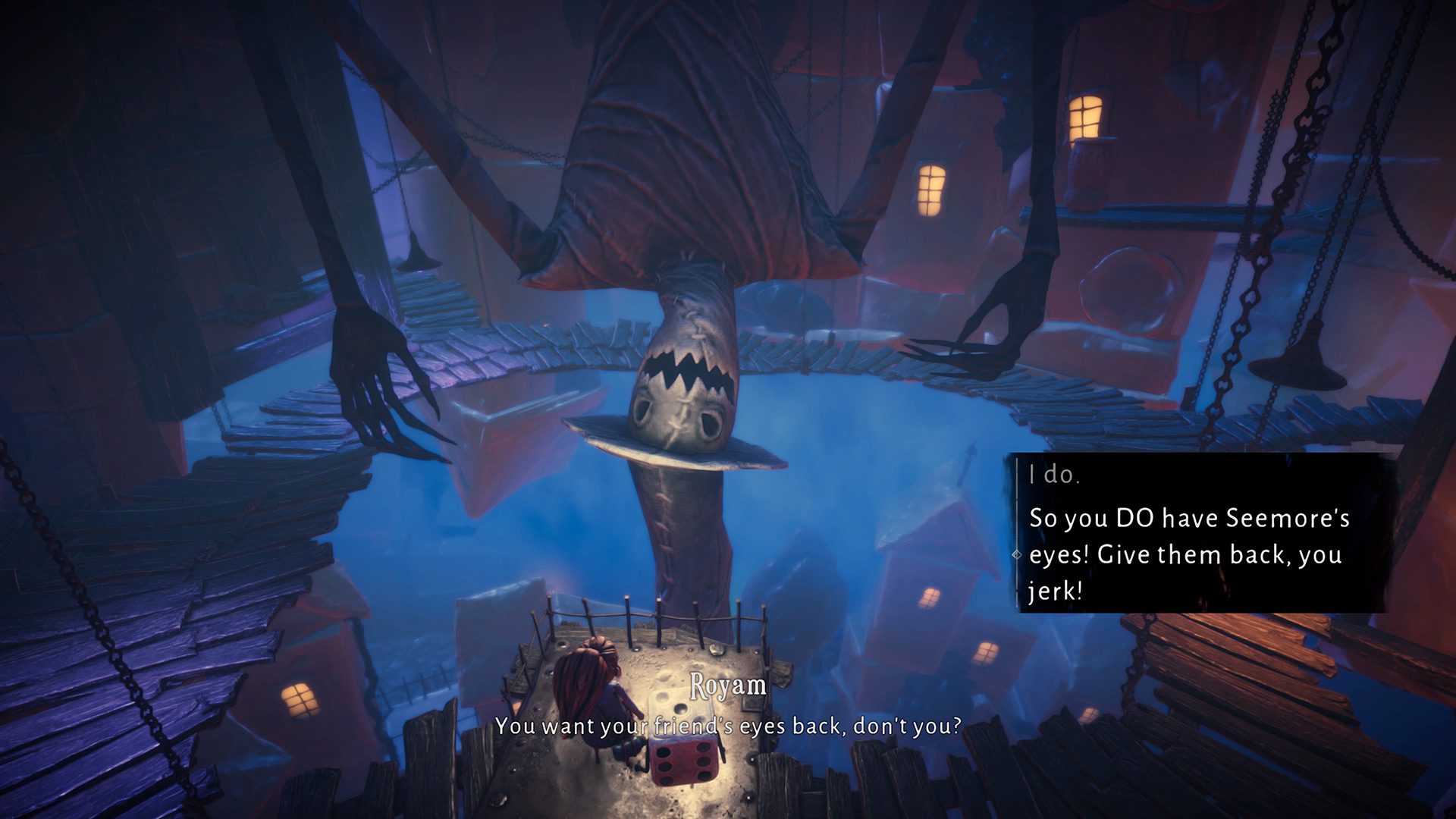 A quick note on performance, at least for the PlayStation 4 version: Lost in Random runs okay on a PS4 Pro, though you’ll immediately notice that it’s not as smooth as it could be. On a PS5, the frame rate is great. No complaints. This isn’t really a stop-motion game, but it captures that vibe, and the aesthetic sings when it’s looking and running its best.

Lost in Random‘s melding of third-person action with an approachable deck-building layer is fascinating to me, and I was surprised how much I ended up liking it. At the same time, Lost in Random is not a short game — expect 10-12 hours, depending on how many sidequests you do — and that length leads to repetition. I formed my ideal deck well before the end, which is fine. It’s a lot of fun! But I grew tired of fighting the same several robot archetypes over and over. Those swooping bird-bots — I love to hate them.

These issues were never enough to make me feel bored or anything — more like a realization that “Yeah, this team didn’t have all the money in the world, and they surely had to make some tough trade-offs. It is what it is.” I would’ve liked to see more gameplay elements during exploration (it can be pretty one-note), more voiced dialogue choices, and some refinements to the third-person aiming and character movement, which can feel a tad stiff until you adjust to them. There’s room for improvement. That said, the fairytale backdrop and wonderful art direction go a long way — it’s easy to recommend this game.

Aside from a couple of noticeable dips with less fleshed-out areas in the final act, Zoink held my attention for my entire 11-hour playthrough. That counts for a lot. If given the chance, I’d love to return to the world of Random in a possible sequel to Lost in Random that smooths over some of these first-game-in-a-new-series pitfalls.