Traveler’s Tales has once again taken a popular film franchise and those colorful Danish building blocks, and thrown them into a videogame blender. This time, its dart board of pop-culture has Disney’s Pirates of the Caribbean franchise set firmly in the bullseye. And oh, wouldn’t it be great if they timed the release of the game to coincide with the fourth film in the series?

All sarcasm aside (for now), TT Games has found a franchise that fits very well within its LEGO-ized universe, and have once again condensed the four epic Summer blockbusters down to short, serialized nuggets of co-op gameplay for the whole family to enjoy. Well, that was the goal, anyway. Has it once again struck that happy marriage between goofy gameplay antics, and a familiar and popular series? Does this title reinvigorate the LEGO series, or is the formula getting a little stale?

Seems like they just did this two months ago, but who’s keeping track?

By now, I’m sure you’re familiar with the LEGO games, where they take a popular franchise and stylize it as LEGOs. The characters are LEGO figures and everything in the game world — from vehicles, buildings, plant life, and more — are built out of LEGO blocks. Conveniently, they’ve just released a LEGO series in the toy line based on the Pirates of the Caribbean series, but honestly, they didn’t have to.  When I was a kid, my favorite LEGO toys were the “Pirate” series.  I’d spend hours trying to build the ships and position the figures to match the picture on the front of the box. Yeah, that’s right, I had no friends… why do you ask?

This latest LEGO title takes all four of the Pirates films, including the forthcoming On Stranger Tides, and splits them into memorable, five chapter game sequences. (Well, six if you count the super secret hidden missions… oooh!) The formula is familiar, but once again TT Games has injected its bottomless supply of charm and whimsy into the characters and world to bring it all together. 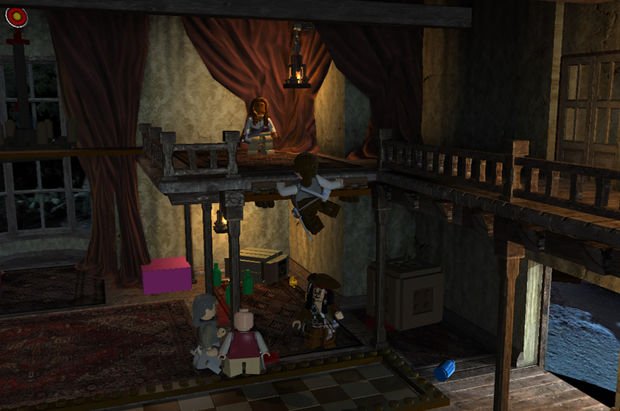 It helps that the characters they’ve adapted are already charismatic, which only serves to amplify the silliness of the game. I’m sure the recipe wouldn’t work as well with LEGO Requiem For A Dream or LEGO Ishtar, no matter how many times I demand they make them. The LEGO humor is especially prevalent here, which is nice considering the last LEGO title (LEGO Star Wars III) was surprisingly humorless; the fun of the Pirates movies is only enhanced in its non-verbal retelling by each LEGO character. In fact, despite his dialogue is only grunts and hums, you’d swear Captain Jack Sparrow was actually voiced by Johnny Depp, which says quite a bit for the character adaptations.

However, in the face of all the cool movie backdrops and improved graphics (keeping a similar pseudo-CG look to the last LEGO title), it does run into the same issues from the previous games. Mission objectives aren’t clearly defined, and you’ll often find yourself running around a level trying to figure out just what to do next. Also, while its intention may be helpful, the dynamic split screen that starts once the characters start to wander away from each other only serves to cause confusion, as invariably, one player’s screen reduces in size and the view becomes obscured by the other player’s end of the quest. 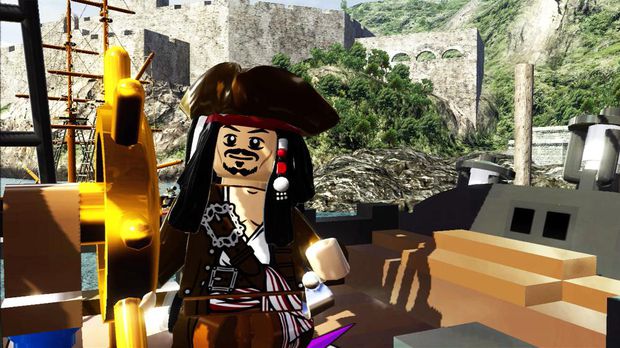 One of the new features for the Pirates game also serves to be one of its frustrations. Jack’s famous compass (which normally directs the wielder to whatever he or she most desires) is used to find eight hidden “treasures” in each level. Once selected, Jack will wander around, following tracks that appear to lead him to whatever is hidden in that particular area.

The only problem is, sometimes it’s not nearby. See, the treasures only show up on the compass when Jack is near them, but some treasures will show up when you’re near… but not near enough. For example, when trying to find a trapped crab, the tracks led into the water, and an arrow appeared to pointed my attention upwards. Upon further investigation, I couldn’t swim anywhere near where it was assumed the treasure was. After dying a number of times, I gave up and moved on to the next screen of the level. There, I discovered the treasure was on the opposite side of the dock, blocking my path on the previous screen. The treasure was only accessible once I ventured further into the level, despite it showing up on the compass on an earlier screen.

All that aside, it’s still a fun game. Well, if you haven’t gotten tired of the same LEGO trappings, that is. There’s still an insane number of characters to collect, secrets to find, and cheats to unlock. There actually seems to be more puzzles in each level this time around, as you build different objects to create passage through a hidden cave, or flag down a passing ship, for example.  And while the split screen isn’t perfect, there is a small amount of joy to be derived from working together with a partner in co-op to finish the puzzles without tearing your hair out. Still, no online co-op… again. 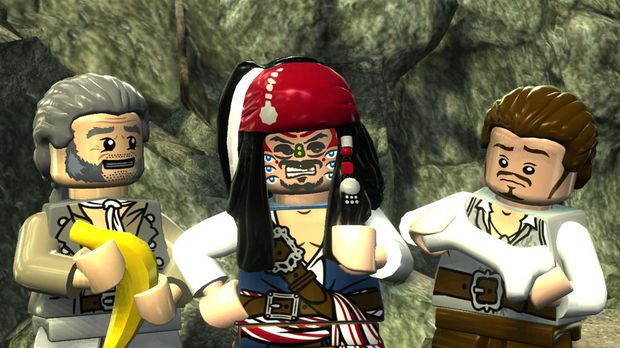 There’s not a whole lot else that can be said for the game, though. It’s a LEGO title, and if you’ve liked the previous games, it’s just as fun, but it’s also just as frustrating. If you’re not a fan, this game won’t turn you. The charm of the franchise it’s based on has some pull, but it may not be enough to convert the non-fans into believers. It is cool to see what mishaps Captain Jack and crew will get into in the new film before it’s released. But by the same token, it’s almost hard to tell what they adapted for the LEGO style of comedy, and which is actually in the upcoming movie.

LEGO: Pirates of the Caribbean doesn’t break any new ground that hasn’t been explored in any LEGO game before, and will probably be just the same as any forthcoming LEGO title, as well.