Knot quite Zebes, but Mi still had fun

A lot of you kids may not remember this, but there was a time when new 2D platformers were hard to find. Game Maker didn’t exist yet. Home console publishers didn’t want to back the genre because it lacked the “wow factor” and did little to show off the ever-growing power of the polygon.

That started to change a few years ago. People noticed that clean, simple-looking simple- playing 2D platformers were marketable in a way that defied the need for “wow factor.” Games like Braid, N+, Super Meat Boy, Fez, Mega Man 9, Cave Story, New Super Mario Bros. Wii, and countless others drummed up more money and attention than most “next-gen”-obsessed industry fat cats may have predicted. Buried under all that was the Knytt series from Nifflas. They were even more “anti-wow factor” than the previously mentioned 2D platformers, maybe to the point where they anti-wowed themselves into obscurity.

That brings us to Knytt Underground — a game that takes the core of the Knytt series, paints over it in the lush, beautiful art direction of Nifflas’s NightSky, and adds new play mechanics and Metroid-style elements. With Underground, the series has taken a huge step towards potential mainstream success, though its still far from ever gaining the kind of marketability enjoyed by Meat Boy and Mario. Still, there’s still plenty of pleasant surprises here for anyone willing to take a chance on this strange little game. 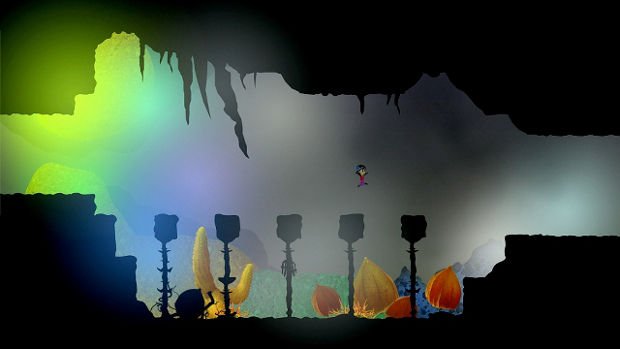 Knytt Underground is split into three chapters. All three chapters are accessible from the start, though the playable level-select screen is designed in such a way that players are likely to organically choose chapter one before chapter two, and chapter two before three. This speaks to Knytt Underground‘s biggest strength — level design that predicts player behavior and shapes it in ways that rank among the best in the genre.

You get the balance between strategic problem solving and muscle-memory mastery of character physics that you’d expect from a new 2D paltformer, but underneath all that is design that seems to know what you’ll be thinking and feeling when you’re pitted with a new environment to traverse. The game responds to those thoughts and feelings with a combination of playfull taunts and encouragement, communicating with the player in a way that feels organic and real, without the need for cutscenes or linear storytelling. 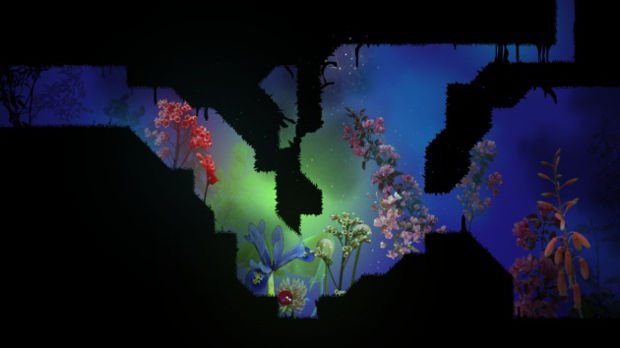 Strangely enough, the game does have a fair amount of cutscenes and linear storytelling, though it’s clear that these aspects of the game were a priority for the developers. In fact, a lot of the story bits and crudely-rendered characters feel like little self-contained troll posts — like passive aggressive self-parodies of games that rely more on ham-fisted written narratives and characters than actual game design.

That’s not to say the characters aren’t interesting or the story doesn’t have merit. It’s more that making a story about how stories in games are often tacked on and forced is going to inevitably feel tacked on and forced, at least some of the time. When the creator of the game appears in person to break the fourth wall, it effectively works to point out how intrusive and damaging to immersion a cutscene can be, but it’s also… intrusive and damaging to immersion. It’s a tradeoff that may not have been worth it. 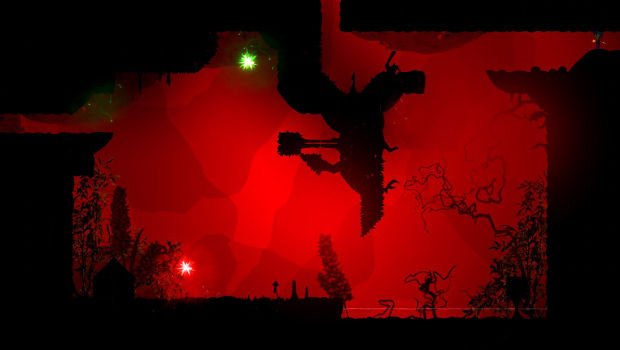 Chapter one focuses on a young woman named Mi Sprocket. She plays in the established Knytt style, with a fast run, and the ability to climb walls. Along the way, she can grab mysterious crystals that allow her to transform into a burst of energy for a limited time. These temporary power-ups are most often used to maneuver through “shine spark”-style environmental puzzles, though others give the ability to high jump or temporarily fly. Mi’s story seems to be headed somewhere at first, with a lot of talk of fairies, disappointed families, and religion. Then you get to the point where everything suddenly comes screeching to a halt. It’s quite the buzz kill, and an appropriate portend of things to come.

Chapter two suddenly puts you in control of a constantly bouncing ball. Unlike Mi, the ball can’t grab walls, but by holding down the jump or walk buttons, the ball can gain more or less torque on each bounce. The ball also has the ability to perform an energy-based grappling beam maneuver on enemy robots, further adding to the Metroid feeling. 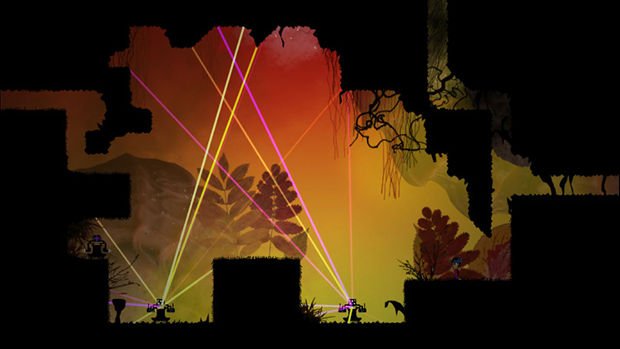 If controlling Mi is like having a sober, intellectual conversation with a beloved family member, then controlling the ball is like a hot drunken date with the world. It’s here where you really start to get the feeling that there is far more possible in the game than meets the eye. On the story front, the tone and style is pretty similar to chapter one, with perhaps a little more focus on self-aware comedy. That’s probably why chapter two is my favorite part of the game overall.

Chapter three takes things back to Mi, who now has the ability to transform into the ball at any time. Appropriately enough, this is also where Knytt Underground starts to feel the most like a new 2D Metroid game, with a much larger map, greater variety in environments, and a more pressing sense of alienation and potential doom. The environments in the game are almost unfairly beautiful throughout, using a collage of silhouetted landscapes set on top of real-life vegetation like cattails and tulips, littered with strange and charming alien life. They’re great throughout, but chapter three is where they shine the most, combining areas for chapters one and two with new areas that make a cohesive, enveloping whole. 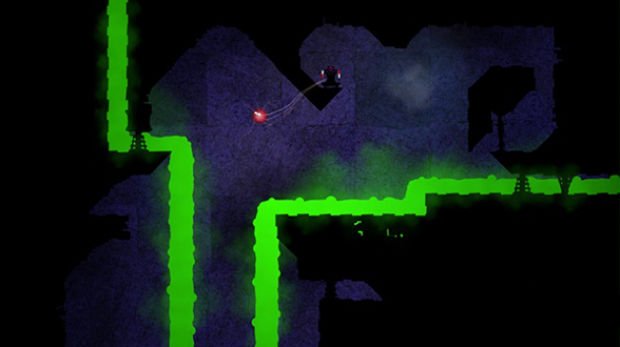 It’s great in theory, especially if you love big, organic areas to explore where you never know if your latest discovery is the result of your cleverness or the developer’s plan for your behavior. Being able to switch between Mi’s forms allows for nearly endless platforming possibilities. Chapter three does well to ramp up the environmental threats as well, adding additional obstacles and new ways to die.

Sadly, it can still feel like a bit of a slog. Where Metroid breaks things up with action and items acquisition, Knytt Underground has very little in the way of combat or lasting power building. You’ve got a specific goal this time (ring six magic bells in order to save the world), but that doesn’t do much to detract from the aimlessness. The world map is extremely large (over 1,800 rooms in all), with not much to do in it but run, climb, and jump, making it from one end of things to the other can feel pretty under-stimulating at times. There’s a new fast travel area called “Disorder” that you can take a risk on, but it’s not always worth it. It’ll cost you a rare “crystal” item to utilize it, and once you’re there, you have limited visibility — and even more limited time — to get to the exit. Fail and you’re kicked back to where you started, one crystal poorer with nothing to show for it. 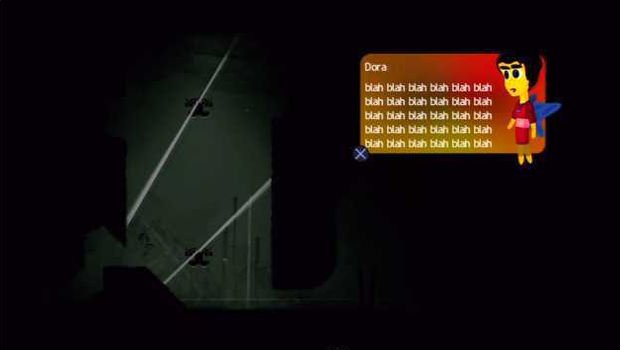 There are plenty of irreverent characters to talk to, fetch quests to give a limited sense of purpose/achievement, and a nice split between breezy and tough areas, but all the same, you’ll likely want to take more frequent breaks than in chapters one and two. Interest will dry out more quickly, especially if you focus on the story, which is either trying to be “so stupid that it becomes awesome,” is designed to make you hate stories in games, or both. Either way, Knytt Underground is brilliantly-designed 2D platformer that offers a ton of content. Just don’t think about the story too much. “blah blah blah blah blah” indeed.