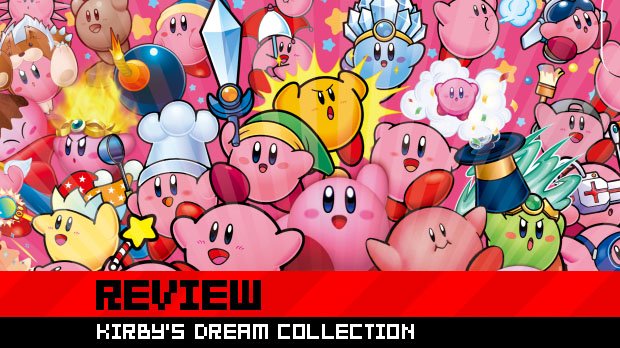 My love of Kirby is known far and wide. While the games themselves are incredibly simple, the sheer charm of the titular hero and his colorful world makes for endearing, unforgettable adventures. Kirby has also seen some of the most dramatic changes of any Nintendo franchise — from the total visual overhaul in Epic Yarn to the ten-Kirby puzzling of Mass Attack, it’s a series that’s not afraid to be different.

The spherical warrior celebrates his 20th anniversary this year, and Nintendo has not forgotten. Kirby’s Dream Collection is a lovingly crafted look back on the publisher’s underdog hero, packed with games, memories, and even a cartoon or two. It’s also better than anything Nintendo did for Mario‘s anniversary.

That was a surprise. 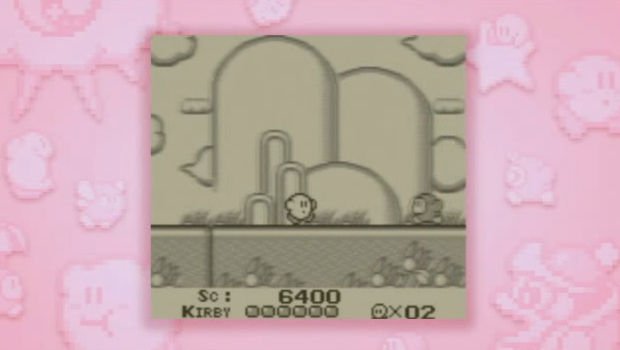 Kirby’s Dream Collection contains six of the bigger titles in the series, culled from the its 20-year span. Kirby’s Dream Land, Kirby’s Adventure, Kirby’s Dream Land 2, Kirby Super Star, Kirby’s Dream Land 3, and Kirby 64: The Crystal Shards are brought together in one package, selectable from an easy-to-navigate but cheerfully animated menu screen. Each game is faithfully represented, so there are no enhancements to the experiences — they are as they were.

The two Game Boy games are probably the most dated, but they still manage to be fun and are worth having as essential curios, the same being said of Kirby’s Adventure. Though enjoyable, these don’t quite hold up to today’s standards. Most players will find themselves tiring of them fairly quickly, but they’re worth at least dipping into now and again.

Kirby’s Dream Land 3, however, is still great. While the ability to team up with weird characters to further enhance Kirby’s powers debuted in Dream Land 2, the SNES sequel is where it really shines, with six odd creatures to recruit. Experimenting to see how Kirby’s different copy abilities work when he’s being rolled by a cat or carried by an owl is just as joyous as it ever was. Ultimately, it’s a solid SNES game in which you can spend half your time wearing a living fish like a big bouncing suit. There is no more compelling an experience.

Kirby Super Star is something of a letdown, as Dream Collection uses the original SNES version and not the enhanced, superior version known as Kirby Super Star Ultra on Nintendo DS. While the original has historical worth, it’s simply not as good as the portable remake and isn’t worth playing if you already have the updated alternative. The Crystal Shards is a fun enough Nintendo 64 game, and probably the highlight of the collection based on its size in comparison to the other titles. It’s also one of the weirder games in the series, featuring a range of creative boss fights against possessed creatures and the power to absorb two copy abilities to create all-new attacks — something I wish had been made more of a series staple, since it’s brilliant.

The six classic titles offer a nice look back at several highlights of Kirby’s career, but I feel that Nintendo missed a trick by not including some of the more obscure spin-offs. Games like the golf-inspired Kirby’s Dream Course, Kirby’s Pinball Land, or even 2003’s Air Ride would have been fine examples of just how varied and experimental the series has been over the years. The included games are all solid looks at more traditional platformers, but Kirby has had so many odd adventures in the past two decades that I’d have preferred to have seen a few more of his stranger outings. 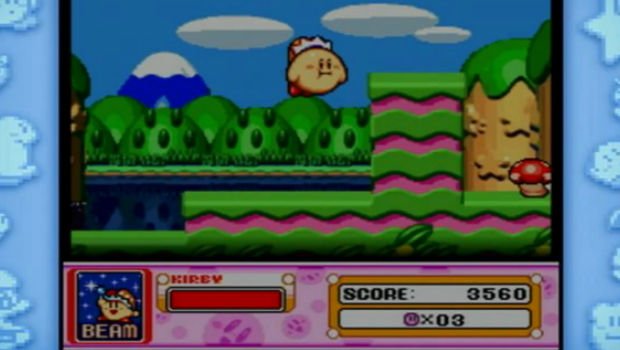 In addition to the classic games, there is an all-new series of special challenge levels based on 2011’s Return to Dream Land. These timed tests give Kirby one predetermined copy ability and challenge him to get to the end of the stage while killing enemies and destroying blocks to accrue as high a score as possible, and taking damage will naturally incur a points penalty. At the end of each series of challenges, players can take on Magalor in platform races inspired by Super Star‘s Gourmet Race courses.

While not a selling point on its own, the challenge mode is a very welcome addition. It’s great to see some original content go into a collection like this; the designers didn’t get lazy with it, ensuring the courses are quite inventive and uniquely tailored to challenge one’s skill with each copy ability. It serves as the perfect distraction when playing through the classics becomes a bit tiring.

By far the highlight of the package is the interactive timeline. Spanning from 1992 to 2012, players can move Kirby along a path littered with trophies and games. Each year contains a window full of fun facts and historical tidbits, charting the election of Bill Clinton, the dates of each of the Olympic Games, and each of Nintendo’s console releases. Every game in Kirby’s library has its own specific page full of details, gameplay footage, and interactive box art. This is also where users can find three full episodes of the amusing (and incredibly silly) anime Kirby: Right Back At Ya! The theme tune is still far too catchy, and King Dedede still needs A MONSTAH TO CLOBBAH DAT DERE KIRBEH! 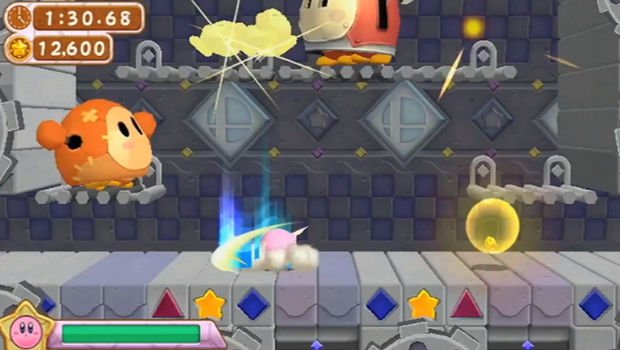 The Limited Edition also contains a soundtrack and a collectible book — neither of which are mind-blowing enough to be worth it to the casual admirer but should certainly be enjoyed by fans. The book is particularly adorable and stuffed with all sorts of interesting information and concept art. The soundtrack takes 42 tunes from across Kirby’s game library, and includes a further three bonus tunes, exclusively arranged by HAL Laboratory’s sound staff.

Presentation is everything, and it just wouldn’t be right if a Kirby collection was full of drab, sparse menus. Everything is animated, brimming with life, and packed with music. From the timeline to the simple game selections, Dream Collection goes all out in making sure every inch of the screen is energetic. Any game that doesn’t have a save feature can remember your progress upon quitting, and one can easily return to the main menu from any game by hitting the Home button and taking the reset option (which won’t reset the entire collection). Too many collections overlook the ability to easily quit out of a game, so it’s a very welcome feature. 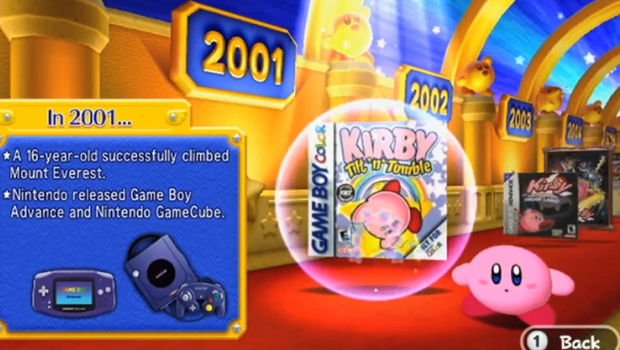 As a hardcore lover of the Kirby series, I doubt any collection could find the right balance of mainstream and obscure titles to satisfy me, but Nintendo and HAL Laboratory have at least done a very admirable job of paying tribute to the pink puffball with genuine affection. The classic games aren’t quite the selections I’d have made, but they’re all worth checking out, and when combined with the extra content, they become one of the better anniversary packages out there. Kirby fans would be foolish to pass it up, while non-fans will get six good games and a lot of fun silliness for their dime. Can’t argue with a deal like that!