Kirby’s Epic Yarn was a triumph, but there’s no denying that Kirby’s true home is on a handheld platform. It’s where he debuted and it’s where he’s had his biggest adventures. Kirby Mass Attack brings Kirby home, both in terms of platform and visual style, but that’s not to say it’s without its fresh quirks.

With an all-touch approach to platform gaming and a whole ten puffballs to play with, Kirby Mass Attack is a game that is both alien and familiar. Above all, however, it’s thoroughly delightful. 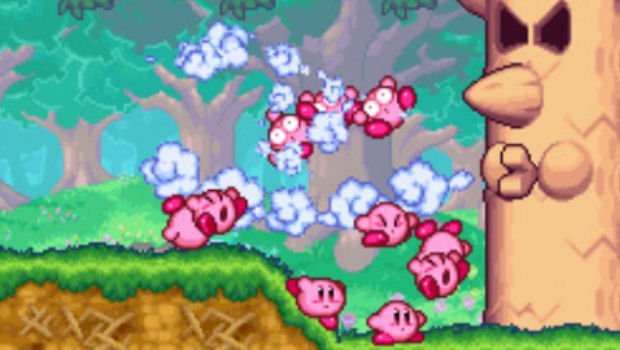 Kirby Mass Attack sees our pink hero split into ten pieces by the nefarious leader of the Skull Gang, Necrodeus — who logically believes that ten small Kirbys are easier to beat than one huge one. His gambit actually pays off, but just before he can defeat the last Kirby, a star representing our hero’s heart saves him and leads him on a quest to regroup and defeat Necrodeus. This happens because Kirby games are known for tightly scripted, incredibly logical stories.

The entire platforming adventure is played using just the stylus. Tapping anywhere on the screen sends all Kirbys to the designated spot, holding the stylus in place allows you to draw a line that the Kirbys will float along, while flicking each individual Kirby sends him flying in the desired direction — crucial for reaching high places or latching onto flying enemies. It’s a simple control scheme, but HAL does an exemplary job of exploiting it to create a huge variety of unique gameplay situations.

Players start with just a single Kirby, but it doesn’t take long to build a veritable swarm. Each level is full of delicious fruit for Kirby to eat, and once he eats 100 points’ worth of the stuff, another puffball spawns — the process continuing until a miniature army of ten has been amassed. Getting to watch an entire scrum of Kirbys waddling along and clambering over each other as they run across the stage is a joy in and of itself. 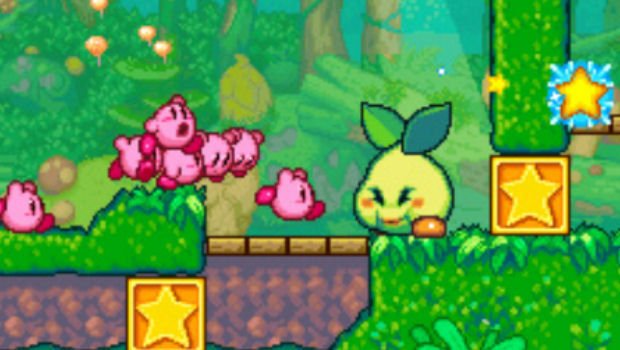 All Kirbys respond to the same command, so pointing anywhere on the screen will send the whole group to the required destination. If you point at an enemy, the Kirbys will jump on it and proceed to pummel their victim to death in a rather nightmarish fashion, reminiscent of army ants cutting a spider to pieces. Bigger enemies require more Kirbys to take down efficiently, otherwise they’re prone to shaking off the attackers. The Kirbys are also needed to grab onto levers, weigh down platforms, and bash into blocks, with some of these objectives demanding a minimum number of heroes.

Each Kirby can be lost, although players always have a chance to save them and can always regain fallen heroes with more fruit. When a Kirby is hit, he turns blue, and if he’s hit again, he’ll become a ghost and start to float away. Flicking a live Kirby onto the ghost, however, will see it dragged back to earth and resurrected. What I love about this system is that it’s both delightfully cute and disturbingly morbid at the same time, which seems to be a running theme for the whole Kirby series.

Thanks to the simple control scheme and tightly designed stages, there’s a pleasant lack of confusion in controlling ten characters at once, but there are a few persistent flaws in an otherwise elegant system. The camera manages to become an issue in several places, as one can’t move the screen to deal with any Kirbys straying from the pack, and there’s sometimes not enough space in front of the group for you to lead them with the stylus. Also, while the Kirbys generally stick together, there will be occurrences where one or two decide to get stuck on a ledge or straggle behind, and majority control is always given the lowest Kirby onscreen — if one falls from a high place, that’s the one the camera will track, even if you need to be in the higher position. These are minor inconveniences at best, but they do cause some light fist-shaking on occasion. 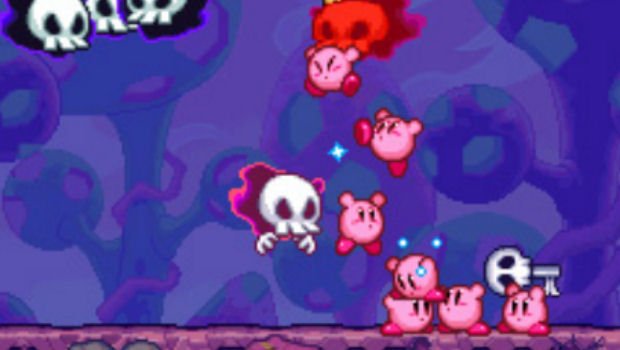 Any irritation is more than made up for with the sheer wealth of clever gameplay design on offer. The platforming and boss challenges are many and varied, with challenges perfectly adapted to the touch-screen interface. For instance, you can’t just dogpile on any enemy. Some have spikes in nasty places, requiring you to fling the Kirbys on certain exposed spots. Others will fire projectiles that shoot into the sky and come crashing back down, requiring you to intermittently call off an attack, run to safety, then recommence an assault. As the game progresses, there are all sorts of new situations to occur, with very little in the way of repeated gimmickry.

Like most Kirby games, Mass Attack is not a strictly challenging game — if your only concern is getting to the end of each stage. However, finding hidden medallions and earning Gold Stars for getting your Kirbys through every level unscathed is another matter entirely. This kind of meta-challenge is something the Kirby series excels in, and its strict enforcement in Mass Attack makes for one of the most deceptively challenging Kirby games around, if you want it to be. Trying to keep ten Kirbys from getting hurt in order to achieve a Gold Star is something that will take even experienced players quite a lot of practice.

The hidden medallions scattered throughout each stage are worth your time too, as they unlock some of the best extra content a game has ever had. Acquiring a certain number of medallions unlocks a new item in the “extras” menu, and while some of them are very simple little minigames like the “whack-a-mole” spin-off, there’s a number of shockingly deep items that could be considered full-fledged games in their own right. There’s a lively little pinball game, a series of RPG-styled turn-based battles, and even a five-level top-down scrolling shooter! While none of these games are five-hour experiences, the fact that HAL went out of its way to create such engaging sub-games is remarkable. There’s enough extra content to keep players invested far beyond the main game. 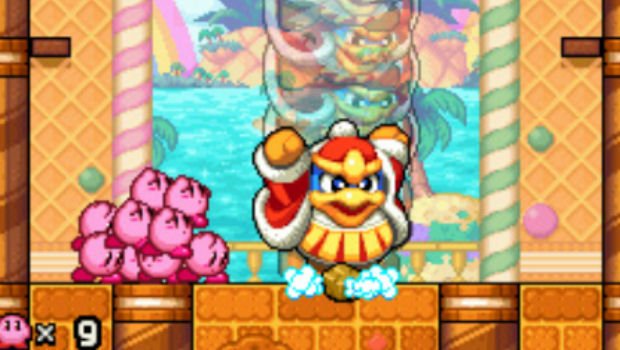 Kirby Mass Attack is one of those games that seem just so incredibly happy to be here. It revels in itself without becoming self-indulgent, presenting a cute and colorful, gorgeously designed world that manages to be lovable with just enough of a dark edge to stop things growing too saccharine. In other words, it’s a Kirby game, through and through, and it couldn’t be more amusing.

With five worlds that contain a sizable variety of levels apiece, plenty of reason to replay old stages, and the most stunning array of extra minigames I’ve seen in a long time, Kirby Mass Attack is a surprisingly deep, rich and versatile bundle of fun. Mix in that classic Kirby charm and you also have one of the finest adventures to ever grace a DS. Cleverly designed, overwhelmingly cute, and devoted to fun, Kirby Mass Attack is a game that should become part of your handheld library without question.