Gawrsh, this one took a while

Kingdom Hearts is a monolith of a series: its ripples can be felt even if you’ve never touched it. The marriage of JRPG and Disney is too strong of a pull to just ignore, which is precisely why the franchise has endured for 17 years. In that time we’ve gotten a prequel, a prequel to that prequel, side stories, and several sequels that don’t really deliver on most of the story beats set up in 2005’s Kingdom Hearts II.

It might not be exactly how you imagined it, but Kingdom Hearts III does tie up the Sora saga with a more than presentable bow.

I’ve summarized the series before in a digestible paragraph, but I’ll start over again just in case. Xehanort, the primary antagonist of the series, wants to recreate the universe (read: exterminate multiple worlds) in a fire and brimstone fashion using Kingdom Hearts as a sort of cataclysmic Pandora’s Box. To accomplish this he creates multiple forms of himself using his powerful magic (stay with me). In Kingdom Hearts III you’ve finally assembled a dream team and garnered enough power to take him on. See, not so bad, right? I skipped over the creation of around 20 clones give or take, but that’s it.

There’s absurdity sprinkled abound but for the most part, things are grounded, especially in the first half. Sora, Kairi, and Riku all have their own quests to settle and it’s all very easy to follow. Sora and Kairi need to train further and Riku is going on special missions with King Mickey: again, easy. It’s the dialogue that betrays the simplicity of it all, with plenty of heart similes and metaphors pouring out from an endless chocolate-flavored font.

I won’t even hint at how everything ends, but it’s anime and over-the-top as hell, much to my delight. All-star enemies from every entry (even the obscure mobile game) are present, proper form for a finale. Sora also gets more of a chance to strut his stuff and prove how formidable (and friendly) he can be. There are notable exceptions however, like a lack of Final Fantasy presence in the main story outside of myriad monster cameos, that do take away from the efficacy of Kingdom Hearts III as a conclusion. I get that not everything is going to make it in, but some of the cuts are unfortunate (even non-speaking Disney characters) and betray the series’ roots.

I said in our review in progress that the combat system isn’t super deep and that’s still the case. But! It’s a ton of fun. The series absolutely nails aerial combat (with combos typically known as aerial raves) and that legacy is secured by Kingdom Hearts III. Nomura and his team have a way with their signature polarizing floaty combat system, which fits Kingdom Hearts to a tee, whether you’re flying up in the sky with Buzz Lightyear or clashing Keyblades with a Goku-haired villain. It’s on-brand, an observation that extends to the series as a joint body: silly or serious, Kingdom Hearts is as true to its heart as the closing song to Mulan.

Hercules (the first world) is a hell of an intro, but not all universes are created equal. Frozen is mostly a wasteland (which is to be expected to some degree), but I wish the team really ran with it further. Elsa’s powers were ripe for showing off here, she just doesn’t have a great platform to do it. Also, not yelling at my TV when the game asks me to find pieces of Olaf a billion times would be nice (and I actually don’t mind Olaf).

Corona, the Tangled environment, is too reminiscent of past forest motifs in the series and never manages to top them, while only just eking out a beautiful kingdom mid-point that we spend almost no time in. Like Frozen it also retraces the steps of the film far too closely, an odd choice that concurrently spoils the story for folks who haven’t seen it and spawns yawns for those who have. The “after or adjacent to” formula has always been the best approach for traditional film adaptations, on top of when the series embraces the completely unexpected like Kingdom Hearts II‘s Timeless River or Dream Drop Distance‘s Symphony of Sorcery (an angle III eschews here). 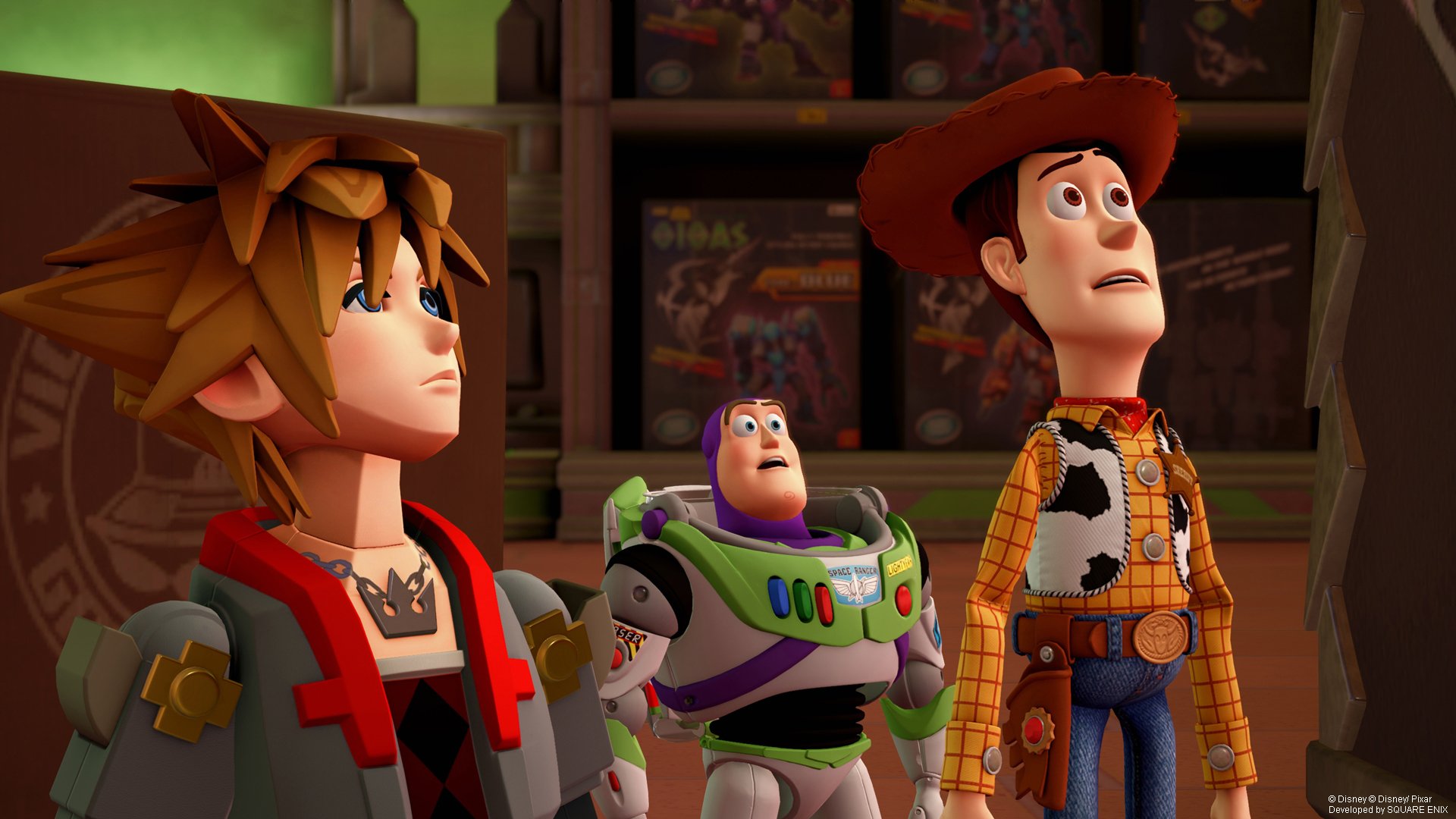 It sounds damning but those two worlds (which have their moments) are really the only lows. I won’t get into the minutiae of every realm but suffice to say, all of the others made a big impact. Toy Story‘s Rex being a superfan of Sora because he thinks he came from an anime video game is incredible. Monster’s Inc., with its complete and utter focus on emotions and the ethics of fear and joy, makes sense for this magical morality tale (and serves as a semi-sequel to the original film).

Hearing Bruckheimer Pirates-themed music again is a thrill, given that the last three films sucked. Who even knows what the continuity of that series is anymore with Johnny Depp out, but this little universe made Pirates fun again. As one of the biggest Kingdom Hearts worlds to date, there’s a lot to do, but it’s coupled with a hint of restraint to avoid becoming the next checkbox Ubisoft game. The complete formulaic gameplay overhaul trumps this retread of the third film At World’s End in a way Tangled and Frozen couldn’t by injecting gaidens into the mix.

Big Hero Six, while running the risk of getting caught in the recency bias net of Tangled and Frozen, slots nicely into the Kingdom Hearts universe and provides some of the best enemy designs to date. Watching Sora acclimate to technology (in a way that wasn’t present in previous sci-fi worlds like Tron) is adorable. The chemistry here is palatable: it works far better than you’d think. 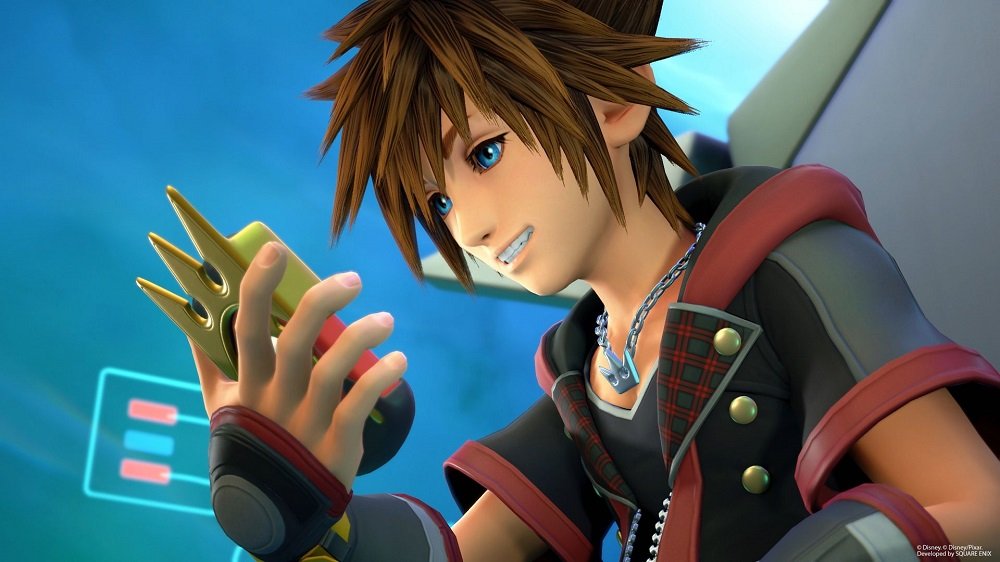 The tradition of extensive minigames continues, but in a way that allows you to put most of the busywork in your rear view if you wish it so. A lot of folks lament the Gummi Ship sections (which are still shmup romps), but you only need to spend a grand total of roughly 30 minutes playing them in this massive 30-hour-plus campaign. Even so, I was inspired to play more as it’s all innocuous enough to not feel like a chore. There’s also tons of hidden stuff to find, “Classic Kingdom” retro games to play, food to cook, and myriad Easter eggs.

It’s all very appealing and a large reason why these games have hit it off with such a large amount of people. They all have that old-school JRPG formula down pat: that ability to dig deeper into secrets and esoteric riches should you wish to pursue them. It’s a lost art among so many “games as a service” titles, to be able to just curl up and get lost in an extensive world. In addition to all that there are self-imposed options to add an extra layer of challenge, like turning off XP (or any number of basic abilities) and starting on the Proud (hard) difficulty.

Kingdom Hearts III might not be the best final entry possible (and knowing this series, a “Final” mix of the “final game” is easily an option), but I’ll dearly miss Sora and his friends. Despite all of the absurd twists and turns, the character missteps and the complete lack of some series-defining cast members, there are very few creations out there that make me smile this often.