Some of my fondest memories were spent with the Kingdom Hearts series. Growing up equal parts Disney-kid and action-adventure fan, I was ecstatic when Kingdom Hearts was announced, and enthralled for weeks on end when it finally reached my disc tray.

Having taken a crack at the entire franchise all over again as recently as the end of last year, you’d expect that I’d be sick of hearing Haley Joel Osment by now, right? Well, HD 1.5 ReMIX managed to reel me in once again, and I’m not complaining. 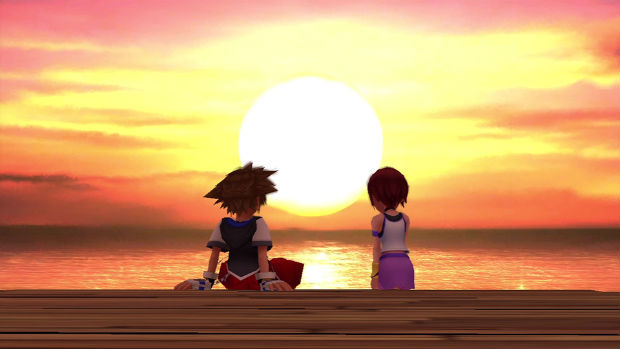 Before the franchise was muddled with fractions in its titles and eons of “hearts darkness darkness hearts” dialog, there was the original Kingdom Hearts. Although it got a bit mystical and hard to follow at points, people fell in love with it, because it was a great action game that allowed them to adventure into the Cave of Wonders and befriend Cloud Strife over the course of an afternoon. It was an attempt to tug at all the right strings and feels of fans everywhere, and it worked.

Kingdom Hearts puts you in the shoes of Sora, a keyblade wielder that has the power to travel across the universe and right as many wrongs as he can along the way. But he won’t be alone, as Disney favorites Goofy and Donald will be there for emotional and practical support as you travel across lands like Aladdin‘s Agrabah and The Little Mermaid‘s Atlantica. Once the game gets rolling it doesn’t really stop, as nearly every world will have you guessing as to who or what could show up, with some of the most top-notch voicework in the entire industry to boot.

A few of the game’s inherent issues are still there to rear their ugly head, however. It still takes a full hour to get started, after the intro, the beach, and Traverse Town are all said and done. There are still Gummi Ship sections that unnecessarily (although I’ll fully admit that I do somewhat enjoy them) force you to wait before you explore new and exciting areas. 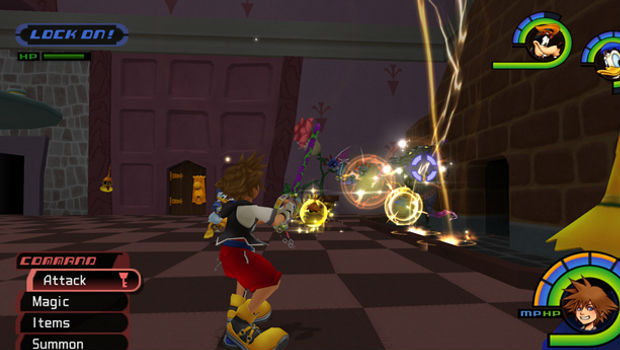 But despite the lack of retooling in a few areas it’s not completely same old Kingdom Hearts you know and love, as there are a few welcome mechanical additions on top of the obvious great looking HD sheen. For one, the shoddy L2+R2 camera system is gone, replaced by a sensible and modern right analog stick control system. You can also finally skip cutscenes on your first playthrough (YES!), so fans who have beaten the game more times than they can count don’t have to sit through scene after scene when they can recite the lines by memory.

Then, there’s one major addition that’s the biggest of all — the fact that the HD set contains the Final Mix of Kingdom Hearts — a version that was previously exclusive to Japan, and came with bonuses and additional content. For starters, a lot of the game’s enemies are different compared to the original, and are otherwise remixed — so it’s not going to be exactly how you remember it if you haven’t experienced Final Mix. There are also new weapons, items, abilities, and in-game story documents, as well as additional cutscenes, a few new bosses, and a revamped difficulty system that makes the Easy setting more accommodating and Hard more punishing.

If you think back to playing Kingdom Hearts and cannot get past the Gummy Ship sections or the lengthy Beach and Traverse Town intros, I don’t believe playing it in HD will magically change your mind. But personally, I think HD 1.5 ReMIX is worth it for Final Mix alone — that’s how good the original game is. 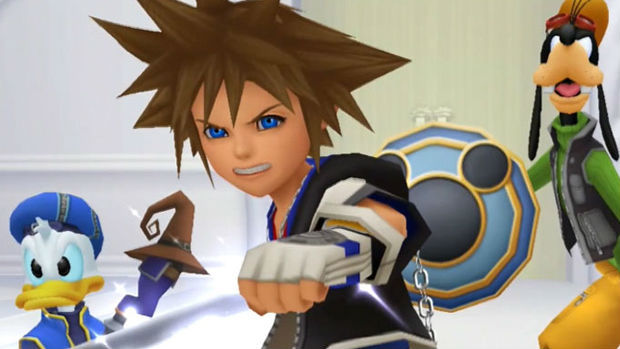 Re:Chain of Memories is the second part of the compilation, and it plays a bit differently than the first entry. Okay, it’s completely different, as it’s one of those card combat games. Wait, where are you going?! Re:Chain is actually a solid remake of the GameBoy Advance game Chain of Memories (making this an HD remake of a PS2 3D remake), and adds a bit more action-oriented combat to the mix to help ease in those who normally cringe at the mere mention of “cards.”

My opinion on Chain of Memories itself is a bit mixed, as overall it’s not really what you’d call an essential part of the franchise, but the experience itself does augment the overall narrative, and it manages to stay particularly engaging because of the sheer depth of the card based systems. Unlike other games in the series which may re-tread into exact locations, Re:Chain actually feels pretty justified because it’s a direct companion piece to the original. It won’t sell copies of this compilation, but it’ll surprise some people. 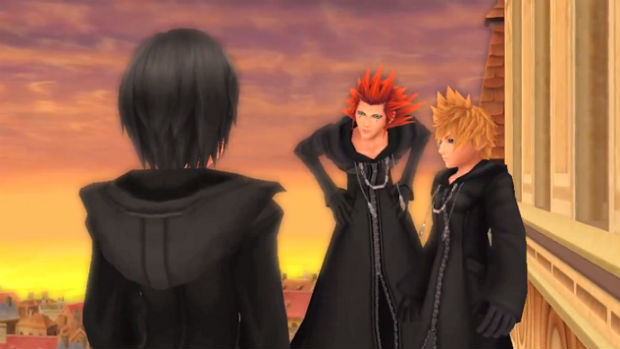 The third and final piece of the puzzle that is 1.5 ReMIX is the inclusion of Kingdom Hearts: 358/2 as a non-playable feature film that’s nearly three hours long. For the uninitiated, 358 is a DS game that takes place after the first title chronologically and tangential to Chain of Memories. Due to the limitations of the DS nearly all of its environments were completely recycled, and as a result, not many people played it.

Because of the general disinterest in this forgotten entry, I really like this move to make 358 into a movie (that’s fully voiced now, no less), so series fans who may not want to drudge through the tedium can still experience a piece of Kingdom Hearts history. The playback system itself is fairly rudimentary, but it thankfully lets you choose between various chapters like a DVD menu, and continue where you left it should you walk away or doze off.

But at what cost does 358/2 grace the rather limited space in this trilogy? Put simply, if this is a compilation of the beginnings of the franchise’s story, the lack of inclusion of Birth By Sleep is criminal. As the very first game in the timeline, many would argue that it’s best in the entire franchise, and the most worthy of a remake given the fact that nearly every single location is brand new. 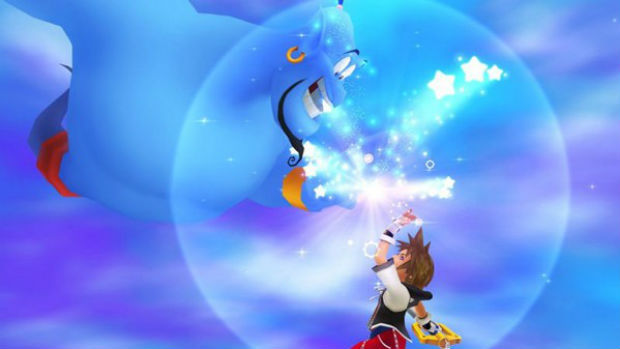 As a series fan I consider it so essential that even if Birth was just a movie remaster it would be extremely welcomed — but alas, it’s not here, and you won’t get the entire story of the early timeline without busting out your PSP. All we can hope for is a HD Remix 2.5 inclusion to wrap things up for newcomers before the long awaited Kingdom Hearts III.

Barring a few antiquated (but manageable) mechanics that are still in place in the first Kingdom Hearts, HD ReMIX captures the essence of the franchise quite wonderfully. For those who are wondering, it’s still fun to roam around and wreck shop as Sora, Goofy and Donald, and for many people, this is the first time you’ll ever experience it in its Final Mix incarnation.