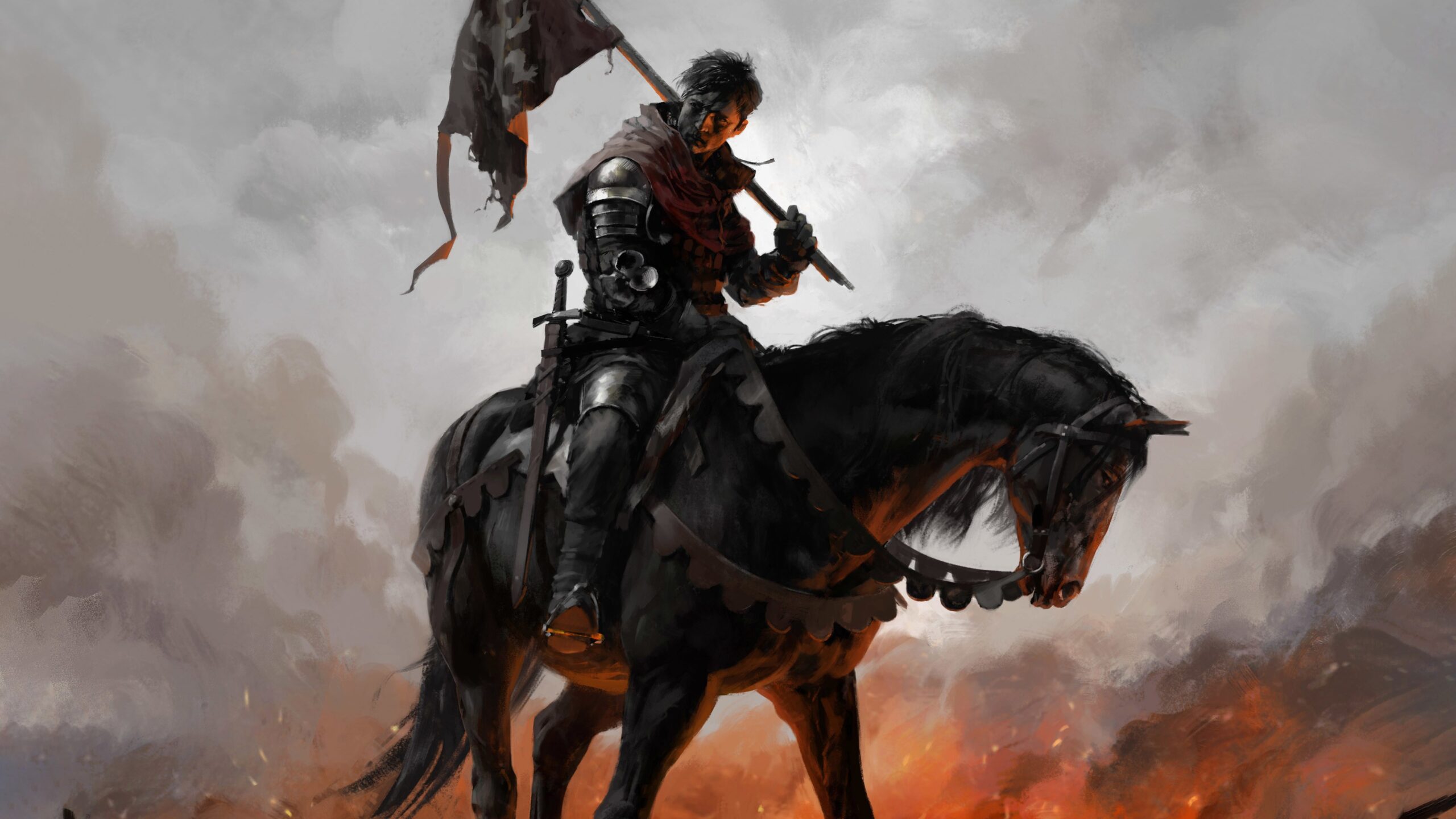 Another cult classic in the making

I’ve played a great deal of role-playing games in my time, whether they be Japanese or Western, from your various Final Fantasy titles to the vast and open world Elder Scrolls games, and all things in-between. As great as these games are, what makes Kingdom Come: Deliverance stand out to me — and what keeps me playing late into the night — is simply how deep its systems are and the extreme attention to detail in almost everything it has you do.

Everything from keeping up your appearance to honing your skills plays a certain role in Deliverance. Want to be the town drunk? Start drinking and you’ll unlock various skills such as stat boosts when you’re wasted. Want to learn alchemy so you can brew your own booze? Don’t expect a menu-based system for crafting; instead, you’ll be picking specific plants (and learning herbalism as you do so), going to an alchemy table, grinding herbs in a pedestal, and boiling them in a pot. All while hoping you haven’t goofed up the recipe you read about…

…If you even can read to begin with, that is. 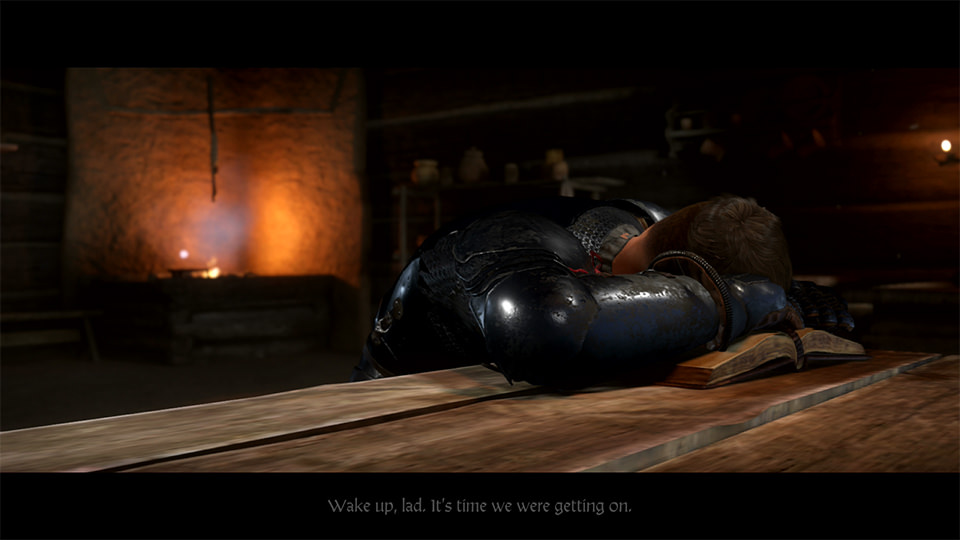 Deliverance originated as a prototype developed by former 2K Czech employees (the same cats who worked on the first two Mafia games). Together, they would go on to form their own studio and launch a Kickstarter campaign in 2014. By the end of this crowdfunding campaign, they would raise a little over two million out of a proposed goal of 10% of a five-million-dollar budget, all so they could show potential investors there was an interest in this type of game.

These aspirations would bear fruit, as the game would later be picked up by Deep Silver for publishing on consoles (and for retail PC copies). This is important. In an industry lately filled with AAA games that have budgets sometimes ballooning over a hundred million, what Warhorse Studios managed to pull off with Deliverance on a smaller budget and through crowdfunding is impressive. 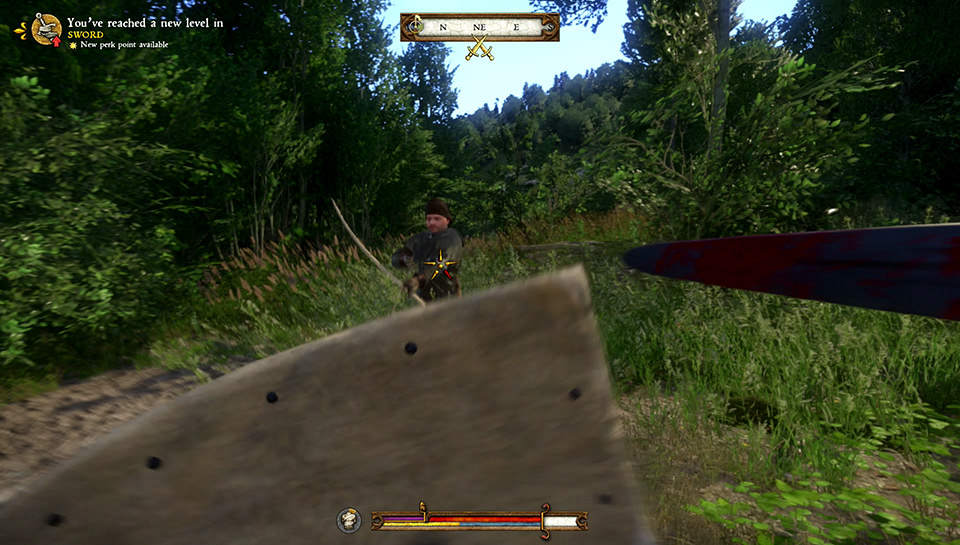 Set in 1403, Bohemia, Deliverance tells the tale of a simple and illiterate blacksmith’s son named Henry. After some tragic events in the form of an attack on his hometown of Skalitz, Henry sets out on a classic revenge tale — one that by the end of the game has him becoming a full-fledged ass-kicking knight in shining armor. Or in my case, a criminal mastermind who sleeps with the wives of lords, gets lost in the woods drunk, and goes through life committing all acts of debauchery in general.

Story-wise, the game is a very slow burn. The opening tutorial stuff can span easily up to five hours and most of it isn’t even combat-related. But, once the story does begin to pick up and you start fighting bandits, Cumans, and get drunk with a certain priest — it gets good. A big part of this is helped by Henry himself and the well-written dialogue that goes with him. He’s surprisingly charismatic in his responses, with solid voice acting, and I can’t help but love some of the dark humor this game will throw your way.

As for the quests themselves, they range from what you’d expect in a game of this nature. There’s everything from simple fetch quests and killing bandits in specific locations, to the more complex and interesting quests such as performing an exorcism on a spirit haunting an old woman (this is where that dark humor I mentioned earlier plays a part). However, this is a game also built on the idea of “realism.” So, for example: if you start a quest that has you looking for medicine to heal someone, but instead decide to run off and do some other quests first, that person could likely end up dead before you even finish the quest.

Deliverance‘s gameplay and mechanics are built on a foundation of historical accuracy and realism, from small details such as being illiterate and having to learn how to read before you can use recipes for alchemy, to the way your appearance dictates how people react to you. As an example, sometimes weaker bandits will flee just simply at the sight of your sword already being covered in blood. Even saving your game is done through sleeping, bathing at a bathhouse, or drinking a specific drink known as “Saviour Schnapps” (which the developers already plan on addressing in the future). For better or for worse, all of these little mechanics and details play a role in immersing you in the world itself. 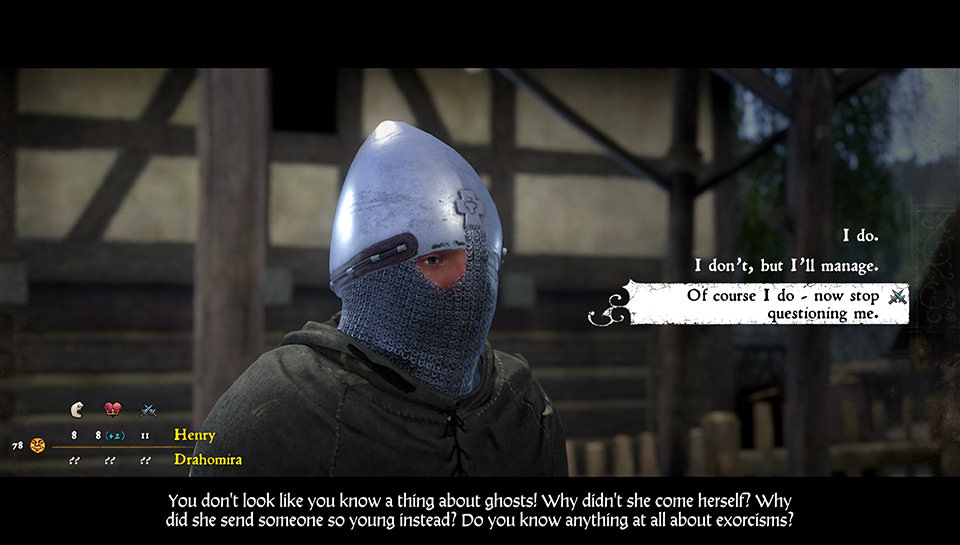 Much of the aesthetic does a fair job of this as well. Running on CryEngine, Deliverance isn’t exactly the best-looking game on the market, but, once again, it nails the details. Even playing on a standard PlayStation 4 for this review, the forests for example are some of the most dense and realistic forests I’ve ever experienced in a video game. Between the elevation, brooks and streams, fallen-over trees, and wildlife (all of which is poachable no less), finding myself lost in the woods has never looked better.

As for the combat, it’s hit and miss for me (pun intended). It’s slow, heavy, takes a lot of patience, and is extremely unforgiving. But, once you do begin to wrap your head around the mechanics, it becomes much easier. Comparing weapon stats to your own stats, leveling up certain skills in weapons and knowing which to use in any given situation, and properly managing your stamina all come into play. Knowing when you’re outmatched is also crucial, as this is a game where if you’re heavily outnumbered or not properly equipped, you’ll more than likely end up dead. 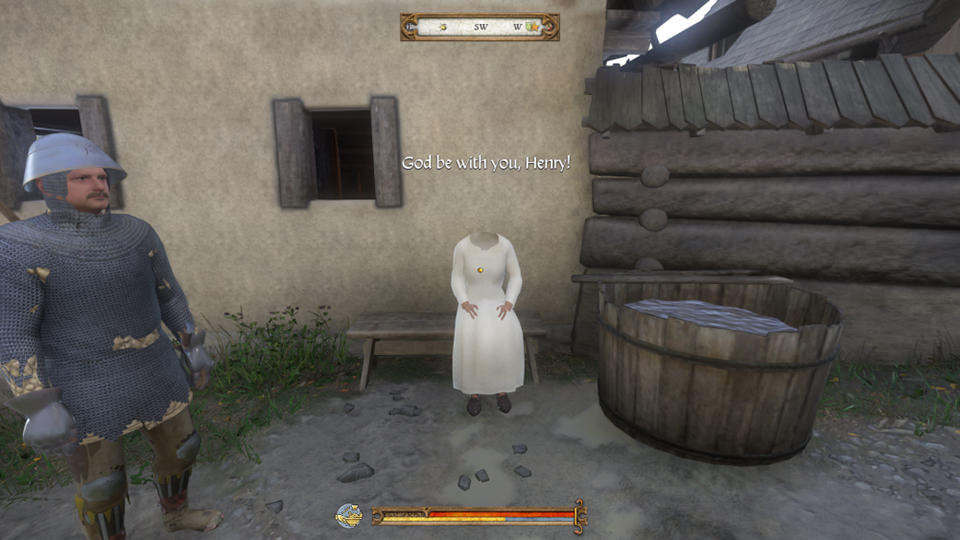 However, the biggest downfall of Deliverance is simply how unstable is. Even with the day-one and 1.2 patches installed, I’d still run into the occasional crash, sometimes losing hours of progress due to the nature of the save system. Worse yet, when it wasn’t crashing, I’d run into bugs such as my game not even saving to begin with. Throw all this in with other issues such as clipping problems, odd collision detection not allowing me to go up stairs at times, awful pop-in issues on both console and PC, jarring load times between basic things such as conversations or simply checking the map, and it makes recommending this game in its current state a very big ask.

Warhorse Studios took a big risk with this game and hopefully in the long run the technical issues can be addressed, because as of right now, they prevent Deliverance from reaching greatness. If you can climb over the mountain of jank and poor optimization then you’ll be in for an incredibly authentic experience, that when it works, truly puts role-playing front and center in a fabulous way.