There were few things that were as awkward — and at the same time quite endearing — as Microsoft’s on-stage demo for Frontier Developments’ Kinectimals. In front of a crowd of weary industry journalists and veteran, a young girl demonstrated the game, interacting controller-free with an on-screen tiger cub. She called out to it, stroked its fur by waving her hands in the air, and even at one point rolled over on the ground to make the cub “play dead.”

Silly, but cute, the Kinectimals demonstration probably didn’t hit the mark for most of Destructoid’s readers. It also didn’t do the final product justice, really only scratching the surface of what the game has to offer beyond a pet ownership simulator. Kinectimals certainly isn’t the “core” game you’re looking for, but it’s a compelling and absolutely adorable adventure that will certainly capture the imagination of younger gamers and adults willing to “let go.” 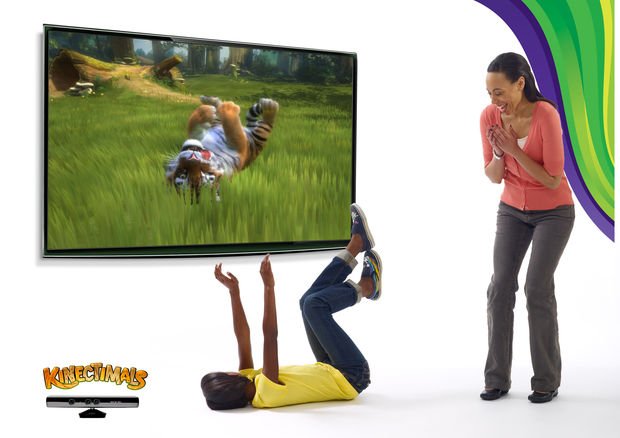 The world of Kinectimals has you visiting Lemuria, a fictional island devoid of human life, and heavily populated by animals, including cuddly tiger cubs. How you arrived on the island is unclear and unaddressed (which is an even creepier proposition when you consider the player might be a young child), but it’s the perfect set up for going on an adventure, and that’s all that really matters.

As you reach the isle you’re greeted by Bumble, a peculiar English-speaking rat/cat/butterfly creature who acts as your guide. As he puts it, he arrived on the island over 200 years ago with one Captain Able Blackwood, a good-natured pirated in search of a long treasure map. Apparently fed up, Blackwood ditched Bumble and the island after only finding a single piece of the map. With the help of Bumble, you’ll start uncovering parts of the map as you explore the island. Man, is Blackwood going to be pissed to learn that within 15 minutes you’re able to find a piece of map that evaded him for two centuries…

That’s the set up, and already you can see that there’s more to Kinectimals that simply taking care of your little furry friend. Sure, you’ll name, pet, bathe, and play with your animal, but Kinectimals isn’t really a Nintendogs-like pet ownership simulation. Instead, it’s a deeper bonding experiencing, mixed with a series of gesture-based mini-games, some of which are surprisingly fun and oftentimes quite a work out. 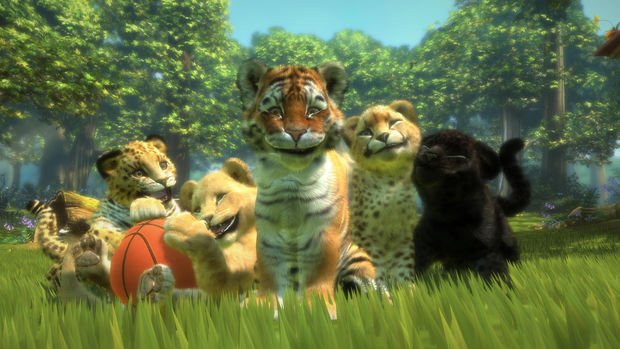 Interacting with your animal is strangely compelling, and it’s not something you’ll really understand until you actually experience it. The idea of talking to and building a relationship with an on-screen pet is certainly a foreign concept, but Kinectimals proves that it can work if you’re open to the experience. You’ll find that even though there’s nothing physically in front of you, you’re going to want to instinctively reach out and touch the animal,  On-screen hands appear to mirror your movement, and you’ll move left and right in front of the Kinect sensor to get a better look at the creature or scratch behinds its ears.

Yes, there’s a bit of a disconnect between hands that appear on the screen and your own, as Kinect won’t be able to read your fingers making scratch motions. Instead, you just sort of move your hands over the areas you want to scratch, the digital fingers do all of the work; your pet reacts with pleasure accordingly. Even still, I found myself making the scratching motions, as I got into the action to make the pet purr and nuzzle the screen. Even stepping back and watching others play, it’s fascinating to hear them talk to and see them interact with the animal, almost oblivious to the fact that there’s nothing really there. For adults with stifled imaginations, these kind of interactions might seem lifeless or abnormal, but it’s a certainty that children are going to easily connect with this part of the game.

To spice things up, Kinectimals throws a series of challenges at you, many tied to the toys you’ll uncover and purchase to use with your animal. The games vary, from throwing or kicking a ball, tossing a Frisbee, and even navigating a small RC car that you pet will chase around. The items can be used on their own, and almost at any time, to “play” with your pet, but Kinectimals breaks everything down into scored (or timed) mini-games. An example would be tossing or kicking a ball to knock down objects, or racing the RC car (with your cub happily riding on top of it) around a track. 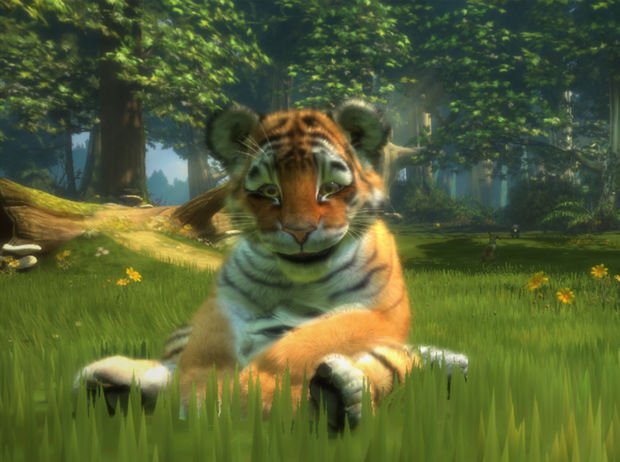 The mini-games are simple, but most of them are surprisingly enjoyable for what they are. The controller-free stuff really gives some of them a unique feel, particularly the soccer or volleyball games where you smack (or kick) the ball between you and your cub. Tossing a ball seems a bit odd at first, and requires a gentle underhand touch; because there’s no way to signal a “release,” it’s a matter of finding the sweet spot and timing for bringing your hand up. All in all, there are no mini-games here that you haven’t really seen before, it’s how you play them –without a controller in your hand — that makes them feel fresh.

Playing with your pet and playing the somewhat shallow mini-games with no pay off wouldn’t be much fun, so Kinectimals ties in these actions by rewarding you with new areas, items, and things to discover. As you interact with your cub or complete games, you’ll earn coins and points that unlock new areas, which eventually leads you to hidden areas and new other areas of the island. You’ll also be able to mix things up by using “The Plunderscope,” a magnifying glass-like objects, to find hidden treasures in each of the game’s areas. Coins earned can also be spent on upgrading your house, like buying new furniture and decorations. 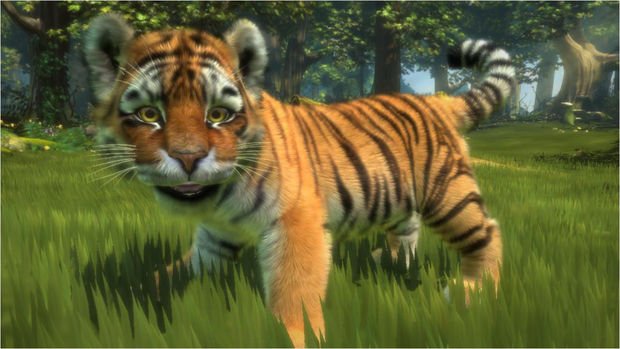 What’s so surprising about Kinectimals is that there’s quite a bit to explore here, well beyond anything one could have expected after seeing the E3 demo. What could have been a simple game revolved around just interacting with your animal and keeping it content is actually an unexpectedly polished and fleshed-out product. Microsoft says there’s some 40 hours of game here. While I didn’t spend nearly that much time with it, it certainly seems plausible when you take into account all of the mini-games and items to be found.

The most open-minded adult will likely only find a few hours of amusement here. But for a child with an active imagination (and a soft spot for all things cute and fuzzy), Kinectimals goes a long way in making Kinect “a must have” this holiday.