I like cats but I love bears. How could you not love those rounded ears, that fuzzy face and little nub tail? I’ve been known to talk to bears. At bookstores I’ll flip through bear picture books like some kind of addict. At zoos I giggle at their annoyed roars, somehow translating what would normally be seen as a dangerous warning as a call of affection toward me, as if to say “come over and scratch behind my ears, kind sir.” Yes, I’m absolutely weak to cute animals, especially bears.

Knowing this, one would expect that I would be all for the feline fun of Kinect title Kinectimals. I was certainly charmed by the cute cats from first sight, but I never got around to playing the title. Of course, I pounced on the opportunity to play a new version of the game, Kinectimals: Now With Bears.

What little manliness I had went out then window when I adopted my first bear cub. I’m now a 11-year-old girl waving my hands in front of my television. I can only hope that no one ever sees me play this game. 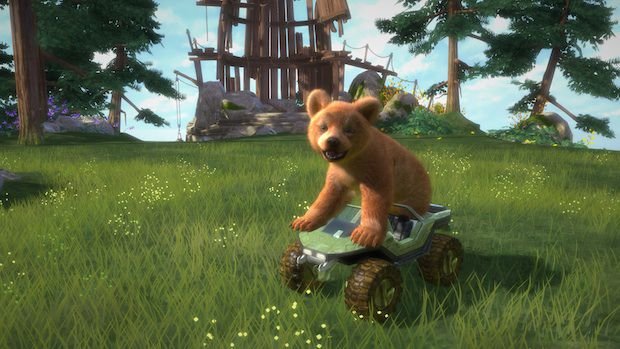 Like the original release, Kinectimals: Now With Bears lets you interact with some of the cutest virtual animals ever created. The fun-loving felines of the original are still ready for a romp in this version, but now bear cubs are also available for play. I wasted no time in going the bear route, picking an adorable black bear from the line-up, but only after strongly considering the panda as my first choice. He was also impossibly cute. Hell, all of them are. The polar bear looked sad when I passed on him. It still hurts a bit.

I set out on a guided adventure with my cub, exploring a deserted island packed with all kinds of trouble for us to get into. The game unfolds on a map, with new zones that are revealed after play requirements are met. With each new zone, new play types are uncovered to add to your arsenal. Through natural movements, my bear and I were able to juggle, play with RC cars, climb trees and even dig for buried treasure. As we found more places, we learned more tricks and met more bears to play with. The third bear I encountered was a sun bear. I can’t quit him and his derpy face — he’s still my bear of choice. 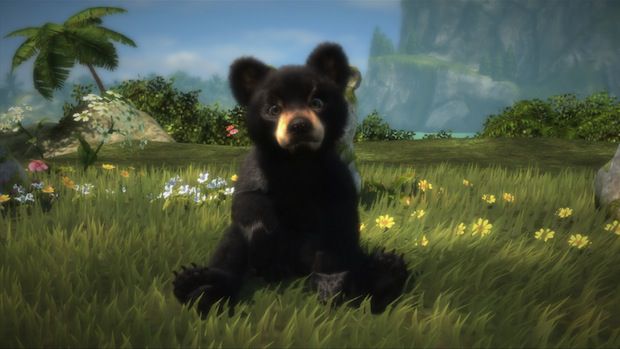 When you’re not adventuring around the pirate-themed island to follow the loosely laced buried treasure story, you’re doing the pet sim thing, with all the grooming and feeding you’d expect from a game of this type. You’re free to take part in bear care at any time you wish, and each session will help you work toward unlocking the next fun area on the map to explore, meaning you can’t lose. Compared with other pet sims, the big differences here are that you’re going through the realistic motions with your hands, and that no pet sim looks this lovely. Both aspects are sure to win any child over, but fellow adults stricken with cute sickness will also appreciate the work the developers have put into this title. How could you not? Such realistic fur movement!

The motion-sensing Kinect technology was free of fault in almost all of my play sessions. Navigating menus and basic interactions, like holding my hand out to feed my cub, happened without a hitch. Even more complex games, like playing volleyball with my bear (seriously!), were problem free and at times impressive in their range. A few of the moves, like tree climbing, which forced you to continually raise your hands and lean to coax your cub up and around trees, were a bit less intuitive, but never to the point of being broken. Throwing was also a bit off, as it required you to lean to aim your throw, and had less to do with the trajectory of your arm. Even with these small issues, young children should have no problem navigating and playing this game. 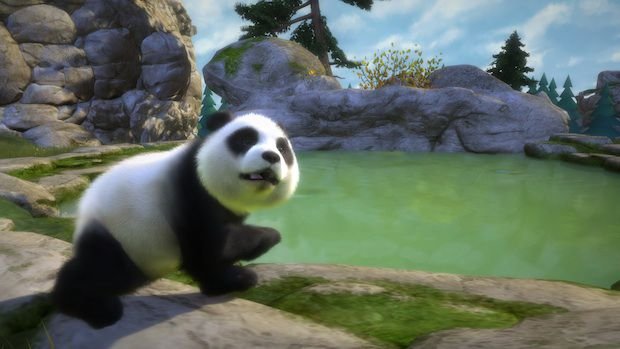 Speaking of children, the game’s sweet-voiced, fox-faced, flying narrator should prove to be a very useful guide for them. Adults, on the other hand, will find it hard to tolerate more than 5 minutes of her voice. There were times that I wished I could have sent my bear cub to claw her out of the sky and eat her face. I get why she’s there, but she sometimes got in the way of my precious bear time with her talking and buzzing around.

This is a children’s game, so it’s likely safe to assume that anyone reading this is considering a purchase for a child. Go for it. This game is adorable, sure, but where it really succeeds is with its motion control, which seems to give you a direct link with the cute animal on the screen. High-end visuals and animation work with this to complete the illusion of having this wild pet in your living room. And bears. How could you pass on bears? They lick the screen from the inside and you wipe off their slobber from the glass. How could you not be sold after knowing that?