Hey, Television! Check out Double Fine’s latest game for Xbox Live Arcade: Kinect Party. In fun-loving Double Fine fashion, it was released for free upon launch in mid-December until the New Year. For those of you who didn’t snag the game in time, it can now be purchased for 800 Microsoft Points ($10).

Kinect Party is a direct sequel to Double Fine Happy Action Theater, which was released earlier in 2012. A virtual “sandbox” of sorts in which players can interact with 18 different virtual environments, Happy action Theater included a number of mini-games. Kinect Party adds onto the fun with 18 additional modes and a few new features as well. 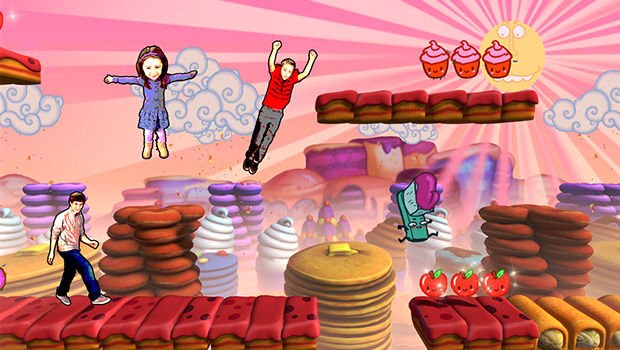 Building off of its predecessor, Kinect Party continues the “just play” mentality of the series. There is no start, end, or goal — the point is to have fun! When starting Kinect Party, it launches straight into the Television, the gateway to playing these quirky yet entertaining games. Players interact with the environment around them for a few minutes until the Television changes the “channel” and moves onto a new game. The menu can be accessed by shouting “Hey Television!” which will allow the player to choose the game they want to play next, or to take/view/share pictures.

Kinect Party has a total of 36 mini-games, a few being more “involved” than others. For example, some of the interactions are basic — the player walks around an environment like a forest or a beach and has to feed pigeons or look for treasure. Other modes are more intense and mimic games like Space Invaders, Tempest, and Breakout.

At random points, the game will capture photos of you (with warning, so you can pose) and save them for you to look at later. Unfortunately, those pictures will eventually be overwritten by new ones and will not be saved permanently unless you share them to Facebook. This is my one major gripe with Kinect Party, as I’m not really partial to sharing rainbows coming out of my butt for my coworkers, friends, and family to see. 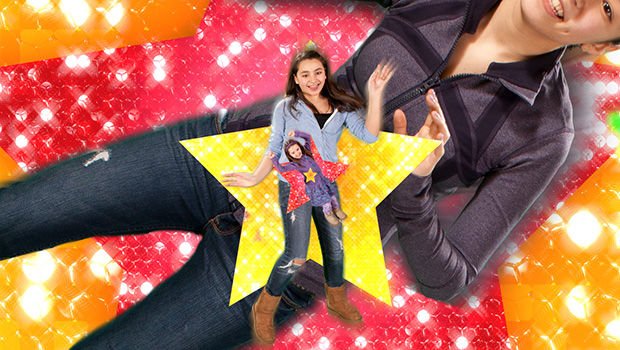 Like its predecessor, Kinect Party can support up to six people simultaneously. To my delight, this included my dog Tali, who was obviously not aware of her projected surroundings. At one point, she leapt in front of the Kinect to destroy one of her toys, but on-screen, she was immersed in sand. The device instantly picked up every second of her movement and as a result, sand was being kicked up all around me.

I was impressed by this, and by the abilities of the game and of the Kinect to work hand-in-hand to create an authentic environment based on my furniture and movements. I specifically mention this because when playing other games for Kinect, I’ve noticed that my environment is rarely analyzed properly. Kinect Party seems to nail it down correctly. 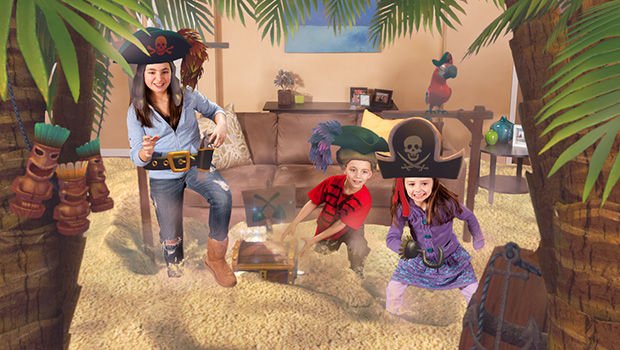 Kinect Party is a fantastic game in the right scenario. If you often have guests over your house, especially family or children, then this is definitely something to check out. It’s hard for anyone to dislike a game in which you build a castle and promptly turn into a dragon to destroy it.

However, I find that this isn’t the best thing to suit lone gamers like myself. I do love pretending to be trapped inside a jello mold with my dog every once in a while, but that can get old. That’s not to say that it isn’t a good game — it certainly is for what it aims to achieve — but Kinect Party is best played with others!

Folks who own Happy Action Theater will already know what Kinect Party has in store for them, and will delight in knowing that the game is only 400 Microsoft Points. If you are one of the lucky to have snagged Kinect Party while it was free over the holidays, you can’t go wrong. Fun to be had at no cost is nothing to complain about. If you missed out on the free promotion, don’t kick yourself. It’s certainly worth the $10 if you’re willing to let your imagination fly!