Now you are The Main Event!

Over the last decade, gaming auteur Suda51 has become a force to be reckoned with. His games have subverted standard video game tropes and provided some of the zaniest and most esoteric experiences around. Pick any random title from his catalog and you’ll be playing a game that is distinctly Suda51.

While his career in the video game industry is much longer than that, his first big international release was the cult classic Killer7. Initially planned as one of the “Capcom Five” for the GameCube, the game saw a release on Sony’s PS2 alongside Nintendo’s ill-fated lunchbox and was met with some very mixed reception. People either loved it or hated it, with no real in between.

Having never played the title before, I was intrigued at the chance to see where Suda51 finally made his crossover from developing strictly Japanese games. While my opinion is a bit mixed, I can definitely say that this feels like something that only Suda51 could create. 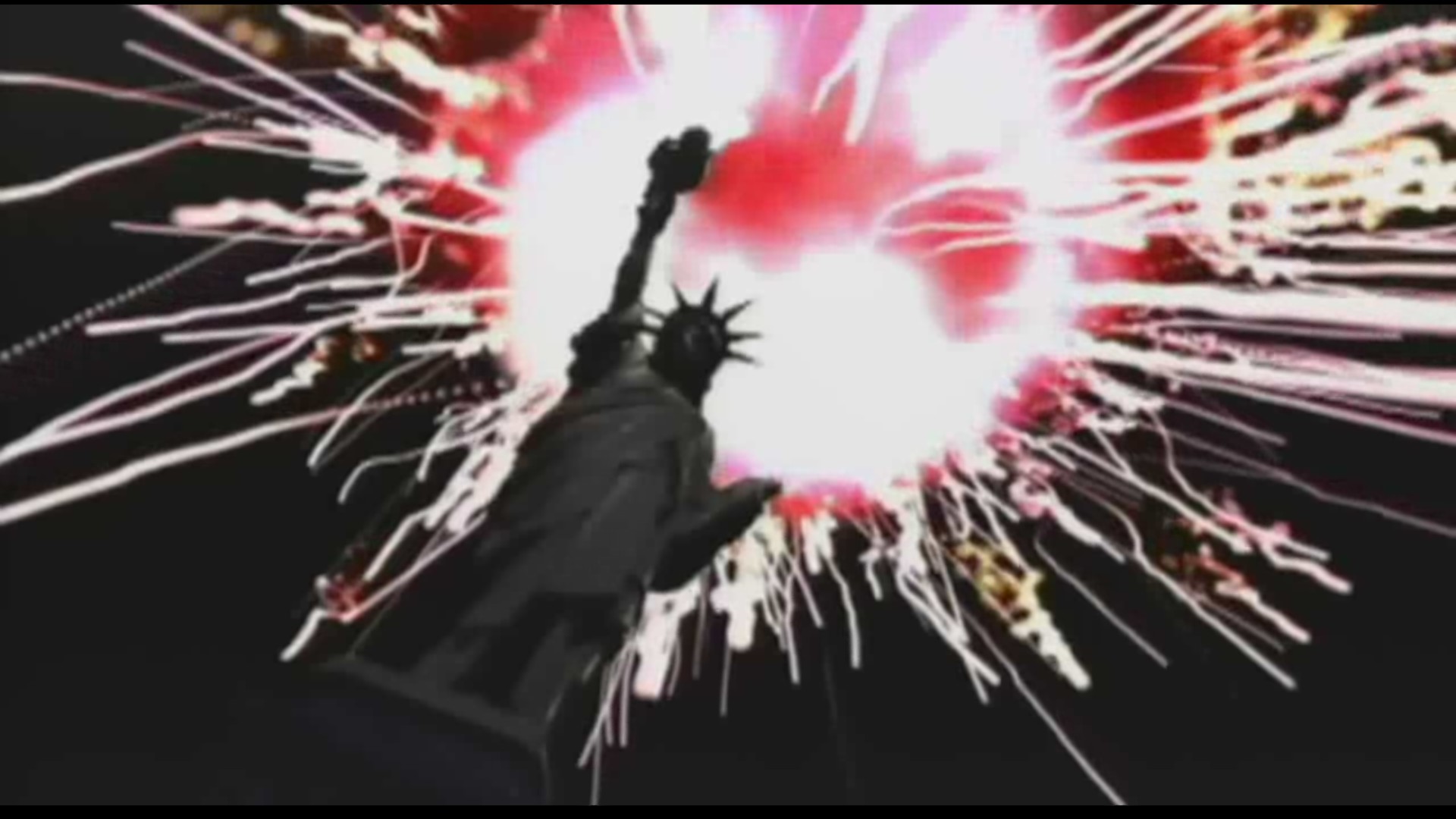 Trying to sum up the plot of Killer7 is a tall order. There are so many twists, turns and fake-outs going on that providing a brief outline could come off as misleading. That being said, the first few missions give the impression you’re going on a quest to save Japan from some political turmoil. The game takes place in an alternate history timeline where world peace has been declared among every nation, though a rogue group within Japan is making things difficult for the United Nations.

Enter the titular “Killer7,” a ragtag group of assassins who are the only force that can stop the invading “Heaven’s Smiles.” As I said, a general summary would do a disservice to how subversive this game’s plot actually is, but just know that you won’t be stepping into a generic tale. As is the case with every Suda51 game that came after, something deeper lurks within Killer7 and discovering its secrets is going to take some serious dedication.

As far as the audio/visual presentation is concerned, I don’t think Killer7 has aged a day. It may appear a bit simplistic, but everything is highly stylized and looks absolutely stunning at higher resolutions. I’ve heard some bad things about the original PS2 port, but this new PC one is leaps and bounds beyond what the GameCube was capable of. Maybe some people won’t prefer to have the cutscenes zoomed in, but a welcome 4:3 aspect ratio option will give you the original presentation as it was meant to be played.

Even without that option, Killer7 looks great. The design of its aesthetic was ahead of the curve back in 2005 and you could be forgiven for assuming this was a brand new title from Suda51. The remaster is actually surprisingly minimal, too, since it doesn’t seem to have changed any of the assets. This is an ultra-bloody cartoon with Suda’s signature neon-pastel color palette and no realistic HD textures in sight.

There are some issues I have with the PC port (like button prompts showing controller commands when using a keyboard), but the low cost and incredible performance make up for most of the drawbacks. Maybe it isn’t as easy as popping in the GameCube disc and just playing, but Killer7 on PC is easily the definitive version of this weird cult classic.

I also need to give kudos to the voice acting, which is excellent. This is another strong suit of Suda’s games, but this wasn’t really an expected thing in 2005. If you compare Killer7 to other Japanese games from the era like Resident Evil 4, Dynasty Warriors 5, or Ninja Gaiden Black, the acting is just top notch. It sounds like the kind of proper dub that games are only just now receiving, with a lot of skilled performances coming from the likes of Steve Blum, Jennifer Hale, Tara Strong, and Cam Clarke. I suppose that pedigree should speak for itself, but each actor turns in a commendable performance that sucks you into the obtuse plot that Killer7 has. 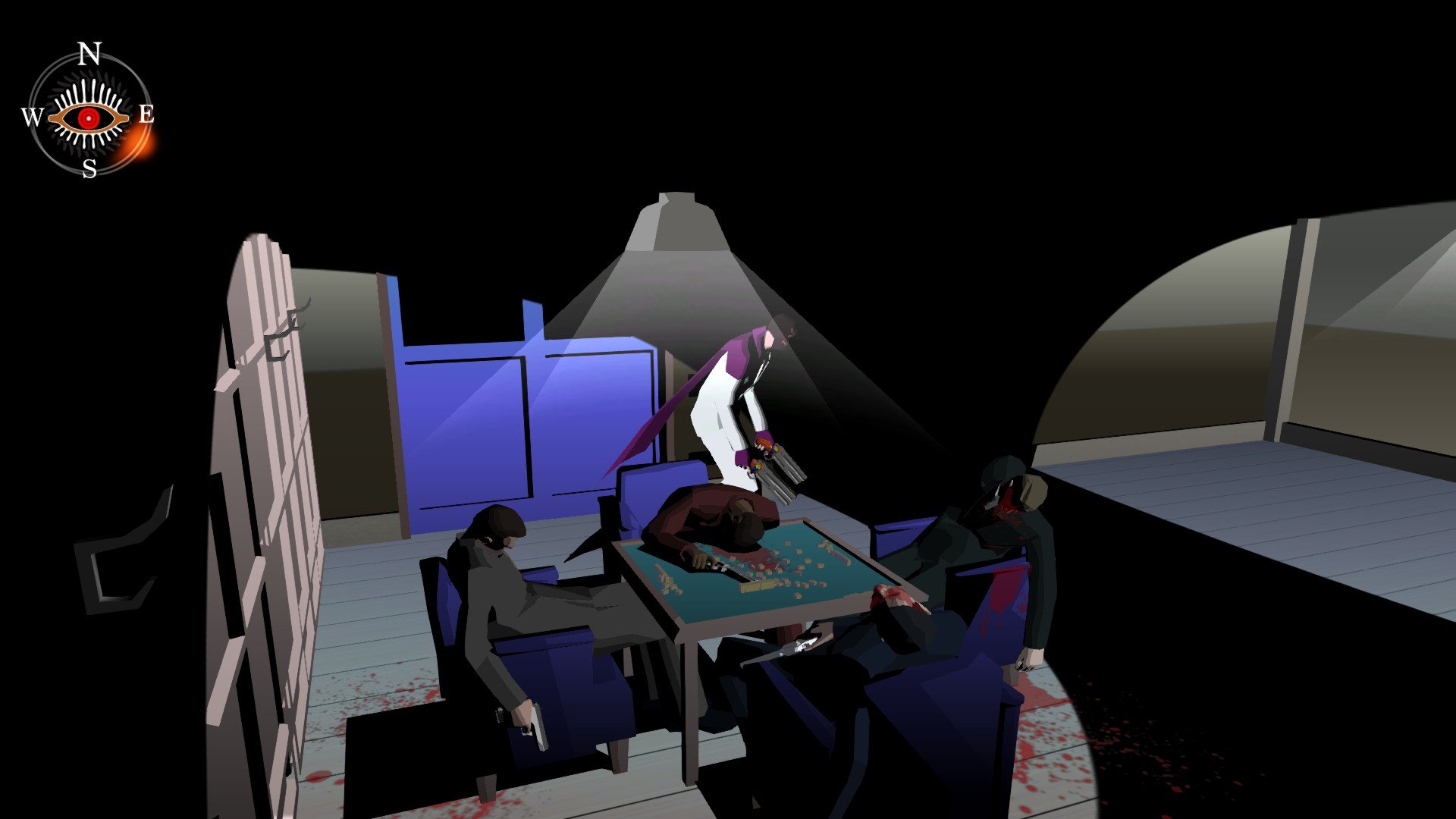 I wish I could keep up that praise for the gameplay, but this is the area I feel Killer7 misses the mark. To its credit, the game is still highly unique and I can’t claim I’ve played anything remotely similar in the 13 years since its release. Suda51 would turn his efforts into more conventional gameplay archetypes after Killer7, so what you get here is something wildly off the wall and almost indescribable.

Killer7 combines first-person gunplay with third-person on-rails exploration. Your character is restricted to moving forward by holding the A button and can be turned around with the B button to backtrack. You’ll automatically turn in a lot of areas, but others will give you a choice of which direction you can proceed. From there, you’ll then be tasked with figuring out the environmental puzzles to make progress to the next section, which may require some backtracking or item hunting to achieve.

Enemies will be dotted along these paths that will require you to stop, scan, aim and shoot to defeat. Since the camera angles are fixed, enemies make a distinct noise when they are in your vicinity to clue you into their presence. Sometimes they’ll be mere feet away, other times they can be across a huge arena and slowly running up to you. The variety of enemies is what drags this down since, despite their changing visual designs, they’re almost all defeated by targeting a weak point. 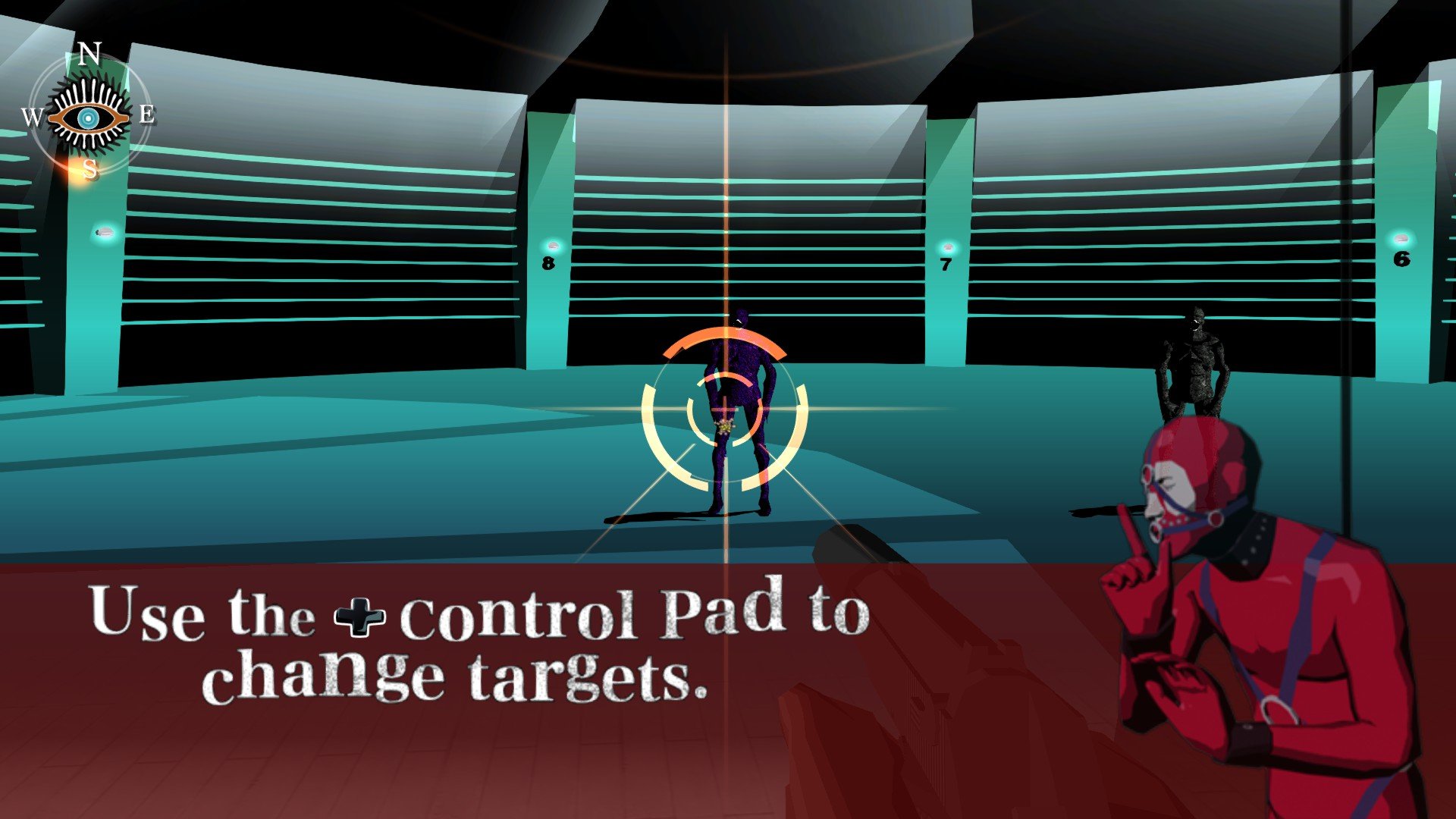 To do battle with these enemies, you’ll have a selection of seven characters at your disposal. Each character provides a distinct play experience, with different weapons and special abilities that will all get utilized at some point during the adventure. Main man Garcian Smith, for instance, will never deal with boss battles but can revive your fallen allies if you happen to perish during a level. The most distinctive, KAEDE Smith, comes equipped with a scoped pistol and even cuts herself and bleeds everywhere to reveal hidden passageways in the environment.

There is a light experience system you’ll have to upgrade your characters, but there doesn’t seem to be any real benefit to powering up your team. Since basically every enemy is defeated with a single shot to their weak spot, you just need to steady your aim a bit and pay more attention to your surroundings to do well. It also doesn’t matter too much as shooting makes up about 30% of the overall experience.

Boss fights do cap off each level and they are all different, but the basic layout set forth in the first level of Killer7 is how the entire game plays out. You go around searching for a specific item (typically “Soul Shells”), use one or two character specific powers, get introduced to a new enemy type and then battle the end boss. Rinse and repeat for about 10 hours. 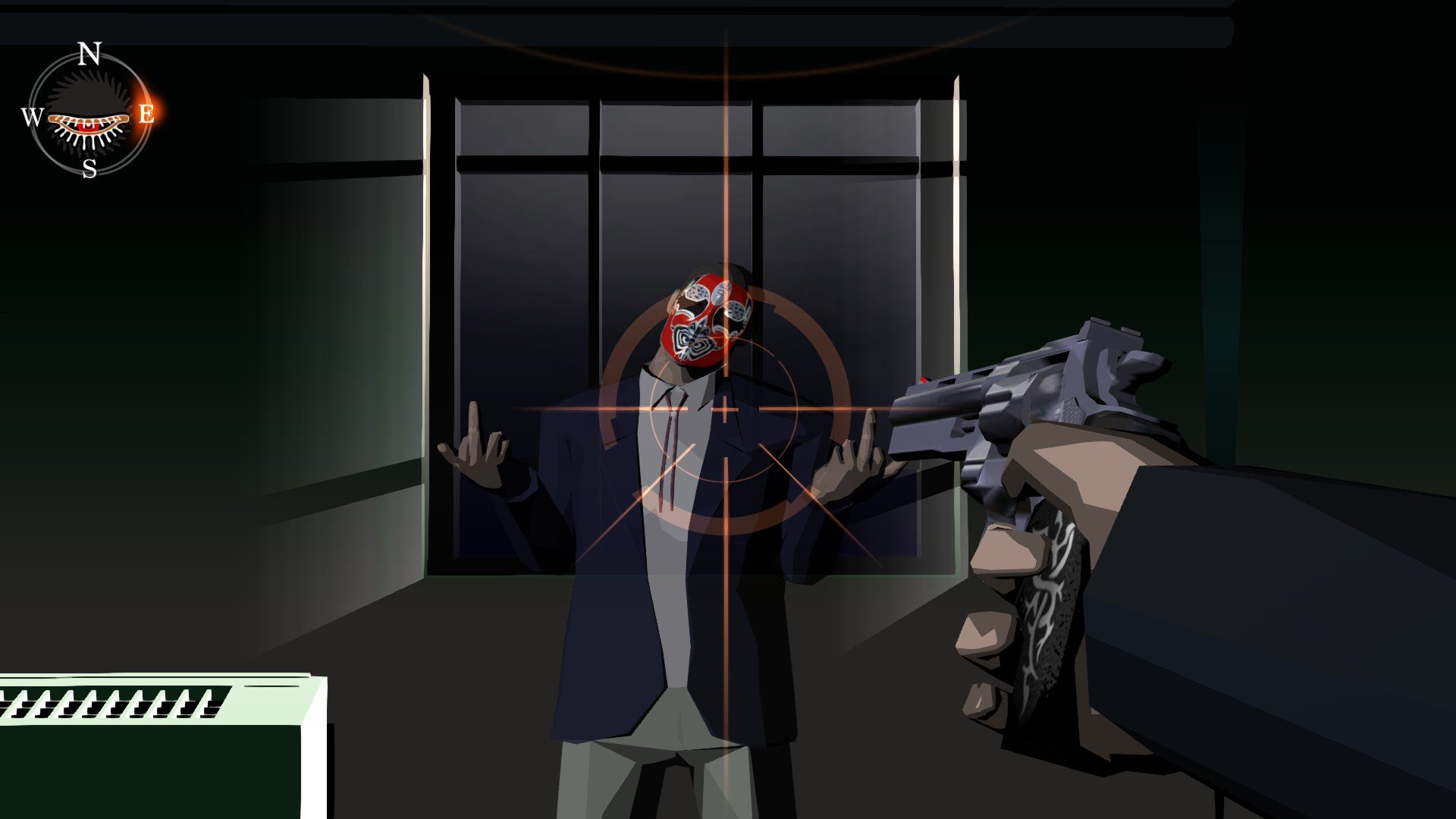 I was certainly gripped from the outset, but after around three missions, I kind of had my fill. The story is intriguing and the visual style has adapted well to modern displays, but Killer7 isn’t the most compelling title from a gameplay perspective. It seems Suda51 had one distinct style he wanted to shoot for and everything else didn’t matter.

The backdrops for each level change and you slowly learn more about the Killer7 team, but the general gameplay is just the same thing. Varied boss battles don’t change up what is essentially an ultra-linear key hunt game. I don’t even have a problem with linear games, but when the challenge is virtually non-existent, your paths are limited to walking forwards and backward and the only real roadblock to making progress is waiting for characters to stop talking, the game begins to bog down before the halfway point.

I could have finished it a lot quicker, but I got so bored at one point that I took a few days off to refresh myself. I wasn’t even sure if I really did want to reach the conclusion, though I am happy I did. There is one mission later on that is truly special from its presentation and it feels like an almost completely different game. 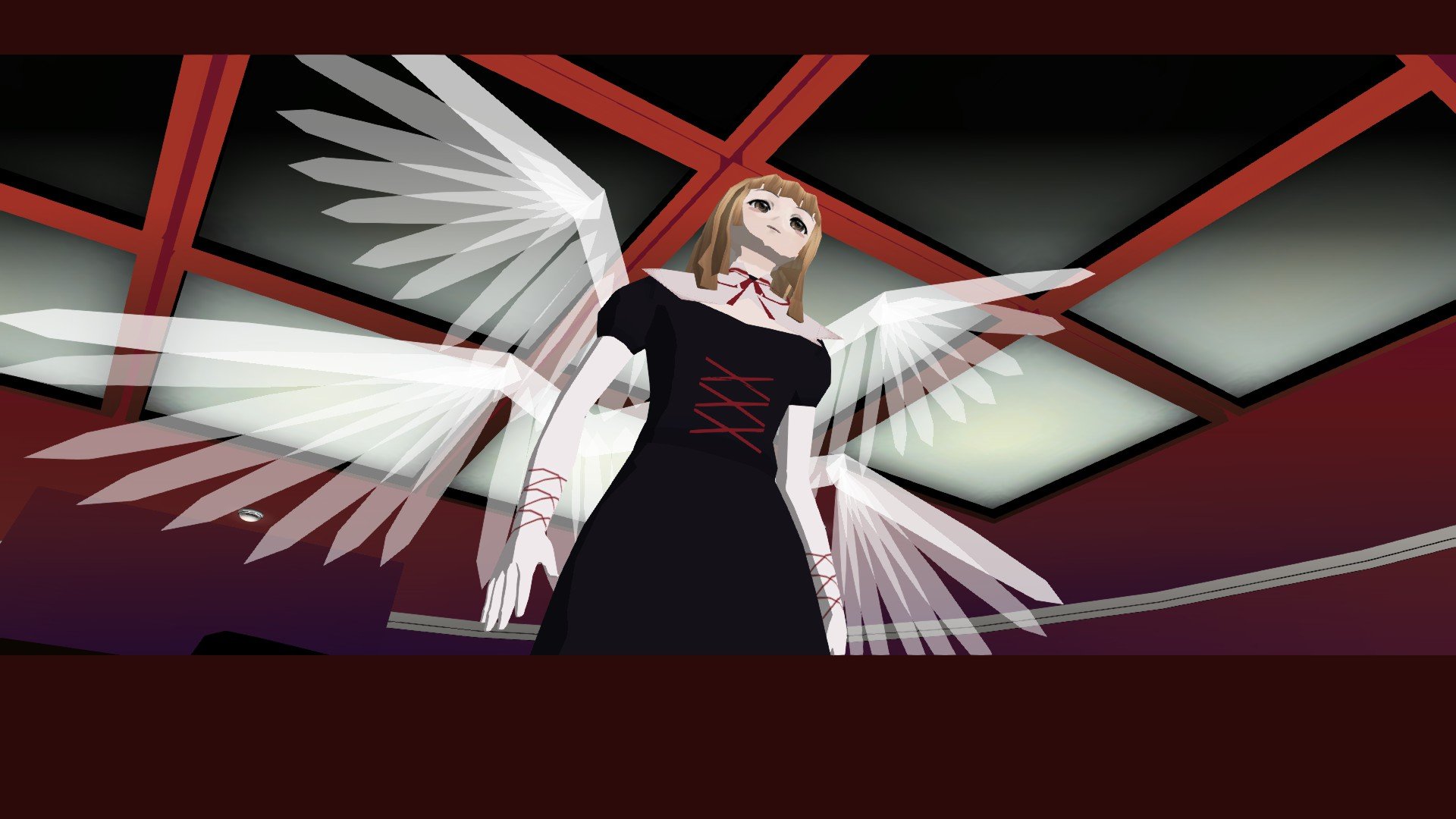 Even with the surprise of that level, the finale is drawn out a bit and the twist may feel like it comes out of left field for some. As with any Suda game, Killer7 requires some homework in the form of digging around FAQs and plot analyses to make heads or tails of its narrative. You’ll have to draw your own conclusions from the information given, though some of that information seems deliberately vague to throw you for a loop.

It definitely is different, though I’m not sure I would call that a positive thing. At the very least, even if I didn’t find the game particularly fun, it is still well worth experiencing once just to see where Suda got his signature style from. Killer7 also doesn’t have any kind of bugs or glitches and feels incredibly polished. This is a game made from a specific vision that doesn’t kowtow to industry checklists. It really does feel like a relic from a different universe.

Even if I find myself in the middle with Killer7, I’d still recommend everyone give this a go. It may not be a game you need to finish, necessarily, but it’s utterly unique and needs to be seen first hand. I don’t think Suda hit his stride until his next title (No More Heroes), but you can see the seeds of greatness were planted with Killer7.