Choo choo! Everyone wants aboard the MOBA train.

That includes Sony, who developed Kill Strain — a game predicated on an intriguing 5v2v5 setup involving two teams of competing Mercenaries and one team of angry neutral Mutants. It’s a mighty cool concept, but the follow-through is lacking. 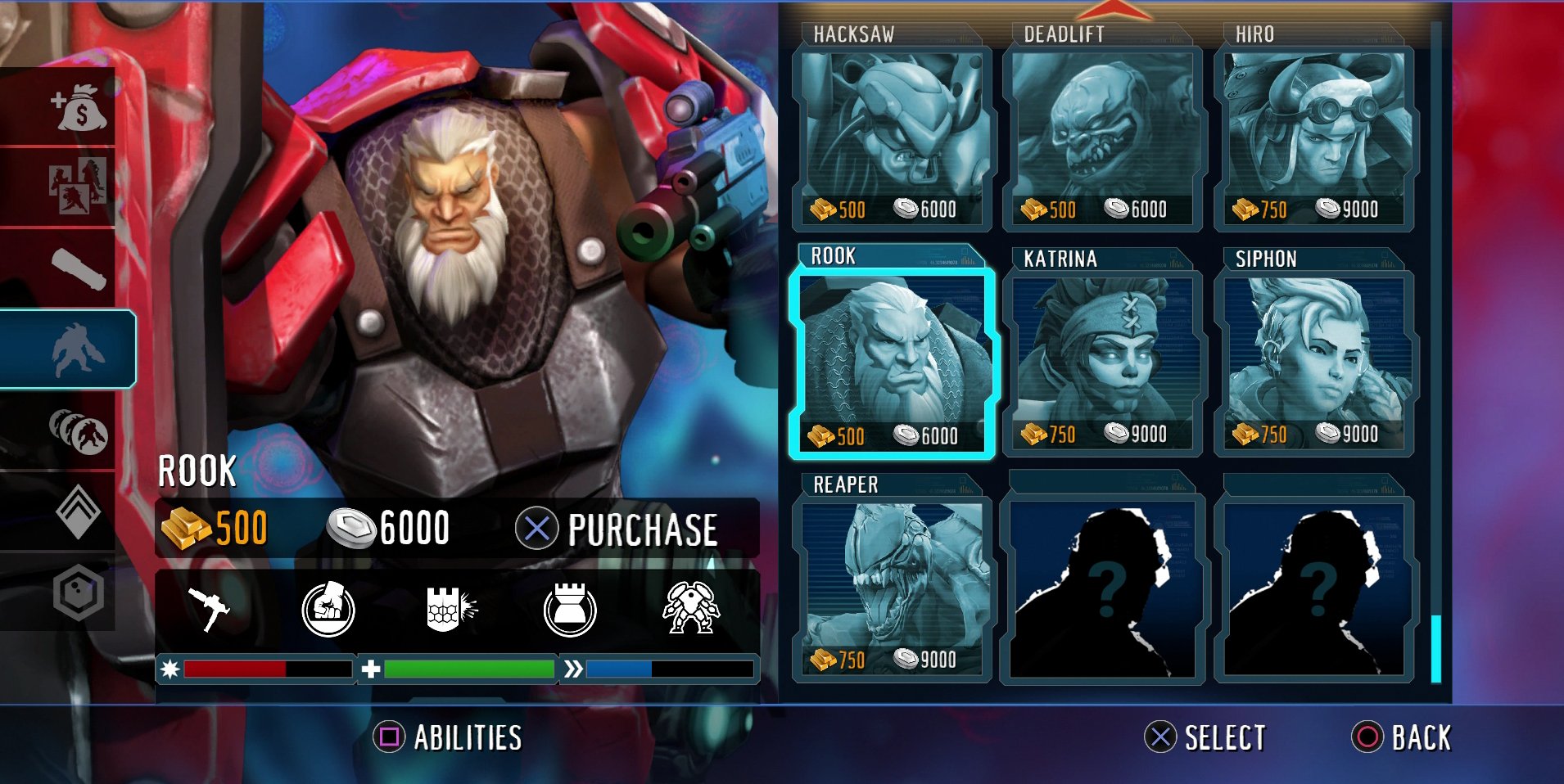 I feel like this has been glossed over by just about everyone — Kill Strain has some badass artwork. There’s an ’80s-style cartoon intro, and all of the concept art looks amazing. The real in-game visuals? Not so much. Once you’ve actually selected a character the allure decays considerably, and the animations aren’t all that impressive outside of a few select abilities.

But Kill Strain is laser-focused on its gameplay, which is a sorta-kinda traditional MOBA outline. Each round, two teams of “Mercenaries” battle against one another for resources (energy canisters in the middle of the map), which allows them to build MECs (robot suits) to take down enemy defenses (towers) and make their way into the opposing base to destroy the core. It sounds familiar, right? Well, creeps have been replaced by Mutants, a role controlled directly by other players.

The Mutants are probably the best part of the game. While they only start off with a team of two (against the Merc squads of four), they can infect other humans by dragging them onto the “strain” — virulent patches of land that deal constant damage to Mercs, and heal (as well as conceal through stealth) Mutants. It’s a sort of meta-game, as the Mutants can win by allowing the 20-minute timer to run out (conquering by default) or by infecting everyone else. The focus on melee attacks and primal close-combat fights only adds to the excitement — my eyes light up when I see I was chosen to be on the Mutant side.

Playing as a Mercenary isn’t nearly as enticing. You’ll utilize a twin-stick system to shoot various weaponry you’ve become accustomed to over the years (rifles, flamethrowers, pistols), as well as standard abilities like dashes and heals. The flow involves grabbing canisters, depositing them, and building up more MECs to destroy the base. If you don’t have a MEC, breaking into bases is basically insurmountable, but if an enemy (either Mutants or the opposing Merc side) catches on, they can destroy your suit in seconds flat.

As you can imagine, tedium sets in after 10 matches or so that all run the full 20-minute duration. There are some awesome firefight opportunities here and there (the array of abilities on offer are all done before, but in tandem, they make for some great scenarios and allow for a lot of strategic depth), but the way the game is designed, you won’t see them as often as you’d like. Since you can’t choose what side you want to be on in any given match (you pick both a desired Merc and Mutant loadout, and you’re randomly placed into either camp), it’s all the more tiring. Hopefully Sony adds in the ability to queue as either side, but I’m not sure if the player pool will allow for that.

Given that the whole shebang is free-to-play I expected a disastrous monetization system but that isn’t exactly the case. Players can unlock several early-going Mercenaries pretty easily, and even if you need to grind out 30-40 matches for the in-game currency to nab more for free, it isn’t the end of the world, because you can get the gist of Kill Strain with just several characters in your arsenal. There’s boosts to buy, and weapons and abilities to upgrade of course, but all of those elements can be ignored. A $29.99 “buyout option” (similar to SMITE) for all present and future characters (both Mercenary and Mutant) is also appreciated.

Kill Strain has a lot of cool ideas, but many of them don’t translate when mired by the sluggish pacing of each round. I think it definitely needs some further optimization, but the uneven fun factor between the Merc and Mutant camps may take longer to iron out.

[This review is based on a retail build of the free-to-play game. The publisher provided currency for testing.]