After making an intriguing splash during Sony’s PlayStation 5 reveal event last year (doesn’t that feel so distant?), Kena: Bridge of Spirits has stayed on the minds of action-adventure and 3D platformer fans ever since. And now, a couple of delays later, the game is here — on not just PlayStation 5, but also PS4 and PC (via the Epic Games Store).

We — or should I say “I,” as I don’t want to speak for you — haven’t seen a ton of wider gameplay footage of Kena since that initial head-turning showcase with the impressive CG animation, to the point where, in the absence of a total marketing blowout, some folks have filled in the gaps with well-meaning yet unrealistically sky-high expectations.

It’s worth reiterating that Kena: Bridge of Spirits is a small-team production.

That phrasing might set off an internal alarm, but really, I’m just trying to get everyone in the right headspace for Kena. It’s super impressive what this team managed to pull off, especially visually, and a lot of players (myself included) are going to have a great time with it — I just worry that some people are setting themselves up for disappointment.

If you’re expecting a triple-A action-adventure game with a bustling world to explore and get lost in for a few weeks, lots of meticulous puzzles to untangle, deep skill trees, consistently engaging traversal mechanics, a bunch of side-quests, or any other assorted big-game bullet points, you’re probably going to face a bit of early-game whiplash.

Kena is not all of that. The budget and scope just aren’t on that level. But there are moments — say, whenever I stopped to snap a photo of my mountainside surroundings, or every time a “movie-quality” cutscene popped up — when it’s so easy to forget.

Let me set the stage first. In terms of a story hook, I was on board right away: you play as Kena, a largely stoic but not silent spirit guide who’s trained to help the dead let go of their sorrow and anger in this life so that they can fully enter the next. These spirits are represented by wooden masks, which are carved for the deceased and are symbolically meant to degrade in sync with the wearer’s transition into the spirit world. So far, so good. It’s a cool setup for a new IP, and it wastes no time in pulling you into the adventure.

When the game kicks off after a bit of text-based exposition and a short tutorial-ized chance to get cozy with the jump, attack, and dodge controls, Kena encounters a vengeful masked spirit who’s clearly going to be the big bad threat, as well as a pair of very young children who are mysteriously alone in the woods. Early on, she also discovers a strange little bright-eyed creature — the first of many — that are collectively known as the Rot. That choice of name for such a cute pack of critters definitely raised an eyebrow, and, no spoilers whatsoever, I kept waiting for a (potentially inevitable) heel turn from them.

When I first heard about Kena, the Rot conjured up visions of Pikmin-like environmental puzzles, and while this game does dabble here and there — you can command the little guys to pick up a misplaced statue, swarm an enemy (mostly as a distraction), or purify blight that has overtaken the land — that’s by no means a one-to-one comparison.

Really, the Rot are here for big-picture story purposes, they serve as the main collectible (there are 100 Rot to assemble, all told), and they bolster Kena’s combat abilities.

Kena has a magical staff, and lots of twisted tree-like creatures to hit with it. The enemies come in a handful of distinct archetypes, whether it’s shield-holders who need a heavy smack, flying insects that can fire off potshots and group up to surround her, or bigger miniboss-esque brutes that like to charge at Kena and apply a lot of panicked pressure. 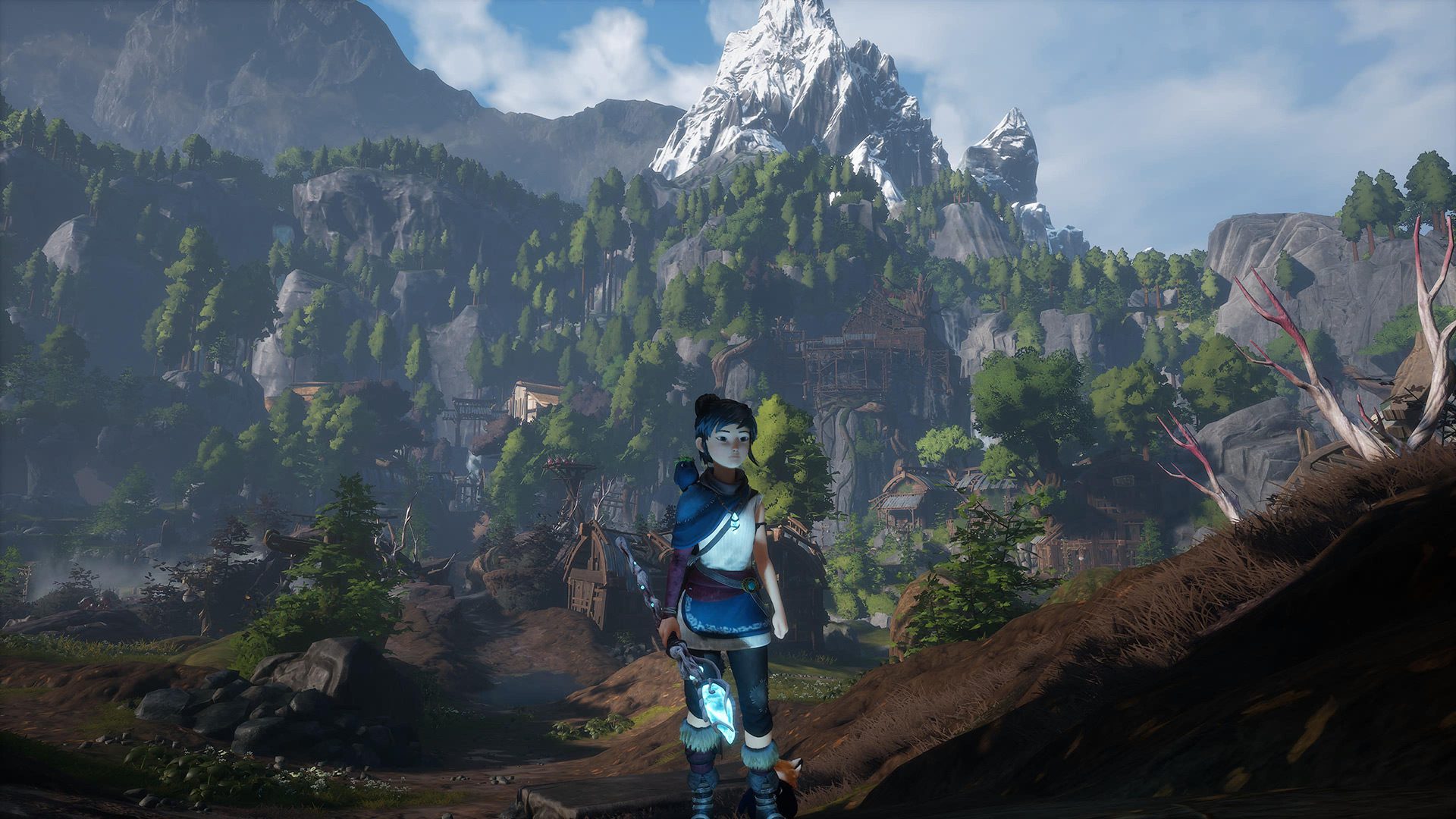 Most fights play out in small yet hectic waves of foes, and once you clear everything out, they’re gone for good, so you won’t have to worry about repeats during the many opportunities to backtrack across the hub and beyond. You’ll also find cursed chests, which can offer small rewards for, say, beating X amount of foes in a strict time limit.

Overall, Kena has what I’d call a “familiar” offense-oriented action vibe — you’ll need to get very comfortable with dodge-rolling, especially during the hard-hitting boss fights, and you’ll also have to develop a feel for how many chained strikes you can get away with before it’s time to bounce. Further in, you’ll gain unlocks like a bomb that can stop time (which is also used in platforming puzzles), a piercing arrow, and a teleporting dash-strike.

The timing on some of these abilities can be tight — at least, tighter than the game’s serene aesthetic would initially imply — and that goes double for the usage of Kena’s shield bubble, which can be summoned at the exact right second to initiate a parry attack. I never quite got the hang of it, so it felt risky. (Thankfully, you can get by without it.) Also worth noting: there’s no “endurance” meter to stay on top of. Dodge the night away.

There’s this fun rhythm to combat. As you dish out damage, the Rot accumulate “courage” (represented as orbs on the HUD), which lets you whip out powerful one-time-use abilities like a devastating spirit hammer, or even heal Kena when there’s a particular plant nearby (there’s usually a few in boss arenas). So you’re encouraged to get in there and rattle off basic attacks as much as possible, rather than turtle up indefinitely. 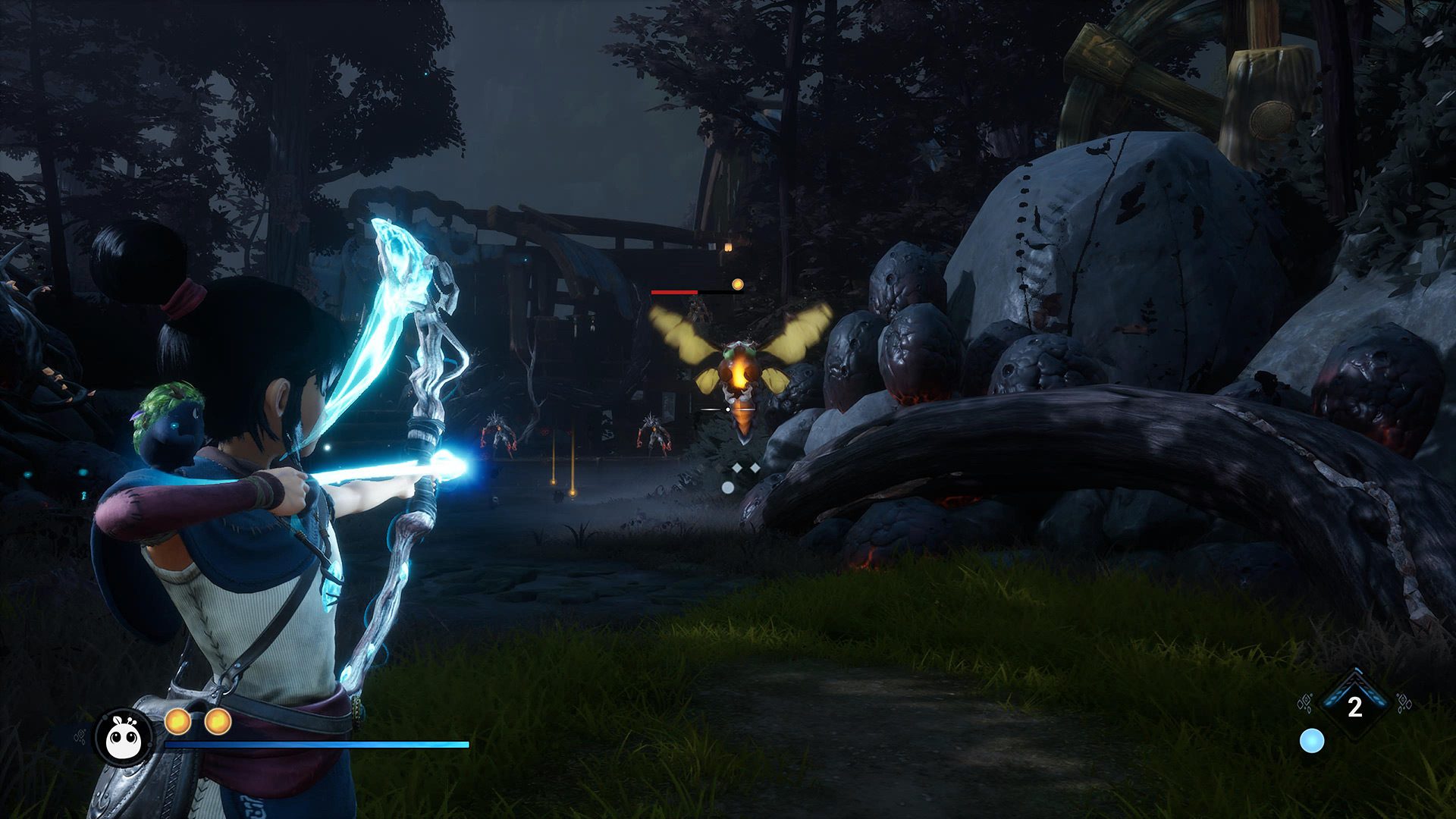 Kena has three difficulties (as well as an unlockable fourth mode), and if you’ve struggled with Souls-like games before, expect to get stuck on several of the bosses on the normal difficulty. I was surprised by — but really appreciated — how tough these fights could be. The key to their success: they don’t last long at all if you know what you’re doing, but if you play it too safe, or you don’t nail down the attack patterns, you’ll need to practice.

If the combat sounds nice and well-rounded, it is; or at least it can be. That said, during the opening hours of Kena, I felt that the options were way too limited — you don’t begin with the bow, for starters — and the world was eerily devoid of life, since, as it turns out, the game is set in and around an “abandoned village” surrounded by greenery. Admittedly, I was anxious about where this all might be headed. It was feeling weirdly hollow to me.

At the height of this feeling, I could almost liken Kena to a gorgeous, modern-day take on a tried-and-true older-era platformer. That foundation is pretty basic, if I’m being frank. When Kena is running around the world looking for the next story objective or optional collectibles (namely, hidden Rot critters and currency shards used to buy the Rot some silly hats), it’s quite a lot of double-jumping, clinging to ledges, and hugging “walls” to comb the land. I kind of expected… more? I’m mixed. I sort of like how straightforward the platforming is, and for similar-minded people, this is an elusive vibe we don’t get enough of at this fidelity; for others, though, it’s going to be too simple to hold their attention.

I want to stress that things open up quite a bit with the combat specifically, and even at its most straightforward, the third-person character-action brawls are a fun challenge, especially in the back half. But when it comes to a large part of the world and getting around it, Kena might let you down. I enjoyed the platforming for what it was, but this is where the game’s smaller scope shows itself most. I expected way more puzzles (with more variety), and more characters, in general. This is a surprisingly solitary game. 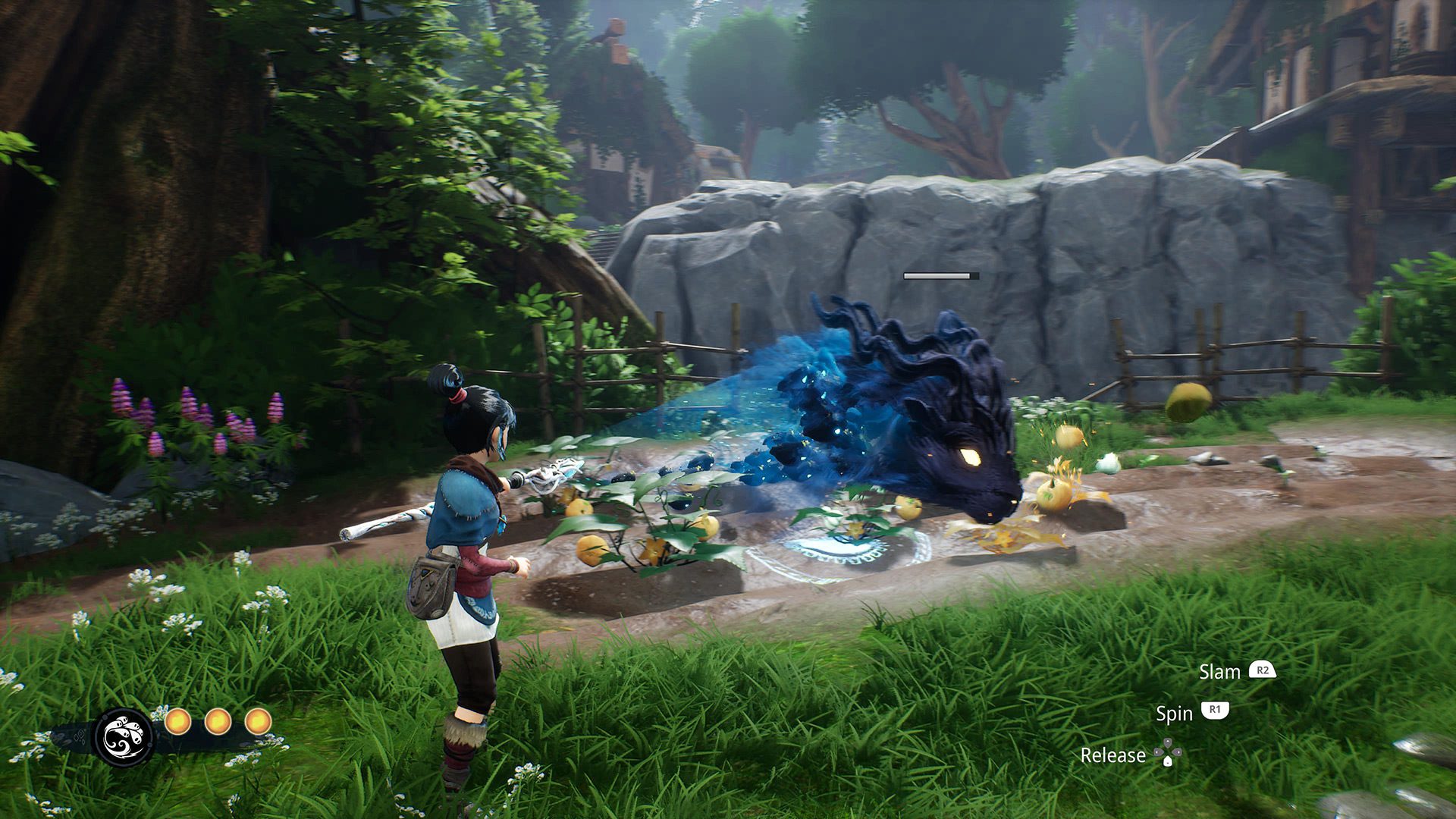 If you’re looking to see the story through to the end without any collectible fluff, you can do just that — though you may need to find some meditation spots to raise Kena’s max HP and scrounge up extra “karma” currency to unlock some helpful but optional skill-tree upgrades like more arrows. (The bow has finite “charges” on a cooldown.) Don’t worry about being gated or anything — it’s more a matter of being able to survive boss fights.

For people like me: my favorite optional part of the game was tracking down spirit mail — you’ll see these mailboxes around town in front of cordoned-off houses, and before you can cleanse them, you’ll need to follow a text-based clue to find missing mail hidden elsewhere in the world. The hints are just vague enough. Also, for completionists: there’s a nice illustrated world map (complete with nicely spread-out fast-travel opps) that shows your collectible progress in a specific region but doesn’t hold your hand even a little.

On a technical level, Kena delivers on PS5 — it’s really pretty and scenic, the load times aren’t memorable (because they’re so quick), and the DualSense feedback on the bow never gets old. I played in the 60fps / upscaled 4K “performance mode,” which is what I’d recommend over the 30fps / 4K “fidelity mode.” I can think of one tiny area of the map where the frame rate seemed to slightly dip, but that’s all that comes to mind. Given that fluid combat is one of the big highlights for me here, performance was pretty important.

I also have to take a moment to shout-out those captivating cutscenes again (they do the emotional heavy lifting), as well as the tranquil soundtrack, which has a few earworms that worked their magic whenever I backtracked. The VO was hit-or-miss for me.

How long is Kena? It’s hard to separate the critical path from all of my completionist antics. I knew there was a point of no return (you should see it coming), and that side-tracked me for quite a while. I’d put the main game around the six-to-eight-hour mark, with room to really balloon that number if you want to painstakingly track everything down. I mentioned the hats, right? You’re gonna want to outfit your critters with cute hats.

Part of me wishes that the Rot were more prevalent in (meaningful) puzzle-solving and traversal, and part of me appreciates that this game is as concise and focused as it is, knowing full well that Ember Lab could run the risk of overcommitting. At times, the world feels too sparse and samey, but I think the restraint was smart overall. While the platforming can be almost too basic, the action feels spot-on in a really streamlined way.

I wouldn’t call Kena: Bridge of Spirits overly ambitious. More like “strategically ambitious.” Ember Lab avoided biting off more than it could chew with its first game, and I dug it.

I hope there’s a sequel! After a much-deserved break, of course.