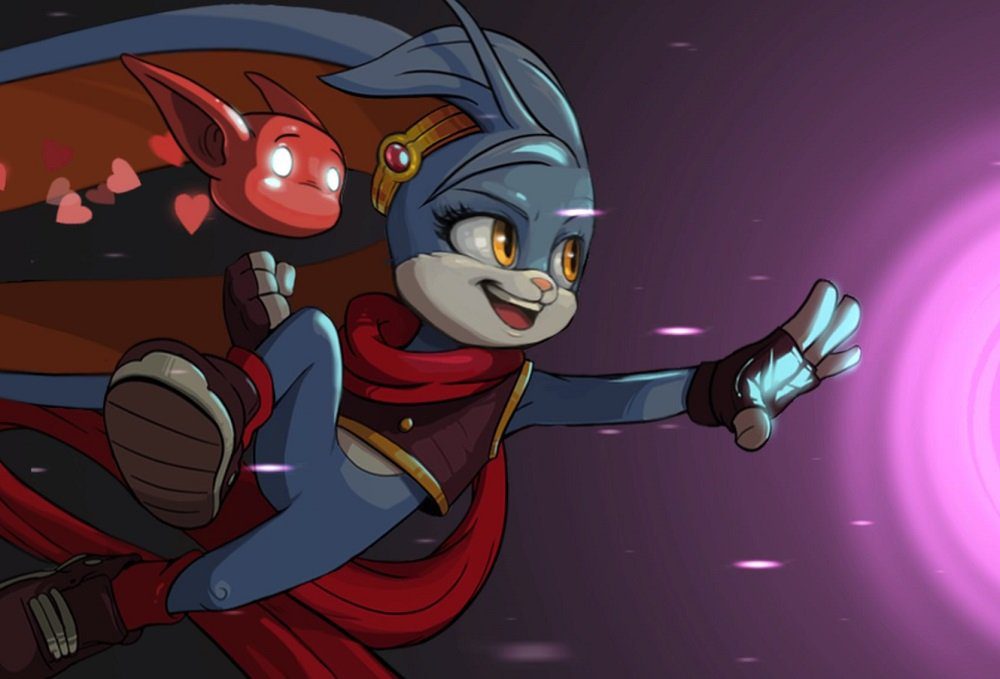 Attack of the Killer Tomatoes

While most rabbits prefer the simple life — hanging around in fields, lolloping in runs and hutches, playing basketball with Bill Murray — such mediocre pastimes do not trouble the head of tomb waidin’ wabbit, Kaze. Kaze chases excitement and adventure, burrowing her way into hazardous worlds and uncovering the treasures that lie within…

…This time however, our headstrong hero might have bitten off more carrot than she can chew.

As a result of Kaze’s unquenchable curiosity, a curse long-forgotten has fallen on her world, draining it of its peaceful atmosphere and idyllic nature. What’s more, this plague has severely affected the crops of her people, turning all of the land’s fruit ‘n’ veg into strange, rabid monsters. The worst fate was reserved for Kaze’s dear friend Hogo, whose spirit has been drained and imprisoned within a mystical artifact, leaving him a literal wisp of his former self.

With seemingly nobody on hand, and with her entire world and community at stake, it is up to Kaze to set things right. It will take all of her skill, dexterity, and courage if she is to battle the killer crops, restore her land, defeat this dark evil, and, most importantly, rescue Hogo. Kaze might have spent her whole life wisely eating her greens, but now her greens are coming to eat her…

Openly described by PixelHive as a love letter to the ’90s platformer, Kaze and the Wild Masks wears its retro inspiration proudly on its dangling scarf. From its likable anthropomorphic hero, to its stage design, pixel visuals, and core mechanics, Kaze is a non-stop tribute act to an endless list of 16-bit predecessors that have hopped, skipped, and jumped before it. While many fans are comparing Kaze to the SNES platformers of yore, the truth is that PixelHive’s new title is probably closer to the classics of the Commodore Amiga.

From its audio/visual style to its general balance of pace and motion, Kaze and the Wild Masks has far more in common with the Zools of this world than it has the Super Marios. Conversely, it can’t be denied that Kaze‘s core mechanics are wholesale torn from the barrel-tossing antics of 1994 Super Nintendo release, Donkey Kong Country, and if you’re going to ape (no pun intended) any other game, it might as well be one of the best.

Playing out like a “Greatest Hits” of the genre, Kaze is packed to brim with recognizable tropes: ropes, ladders, and vines; crumbling and moving platforms; weighted scales; underwater stages; spike pits; rising lava; catapults; springs; and switches — almost every single gimmick from the heyday of platformers puts in a regular appearance, while our hero is kitted out with a spin-attack, a ground-pound, and the ability to bonk her enemies on the head with the obligatory head-stomp. It’d almost be shameful how formulaic Kaze and the Wild Masks is, if it wasn’t for the fact that the game is just so dang enjoyable.

Built on a modest budget, Kaze and the Wild Masks adopts the brilliant strategy of accentuating its positives and hiding its negatives, resulting in an engaging and enjoyable experience. At first glance, Kaze is simplistic and routine to a fault. For its first few stages I wondered whether it had been designed for very young children. But this is all in keeping with Kaze‘s tribute to old-school gaming’s sense of progressive difficulty. By the time the second of Kaze’s five worlds had rolled around, the challenge had set in, one that would only get tougher and tougher as the game progressed. This is perhaps Kaze‘s most authentic callback to ’90s game design. Kaze and the Wild Masks is a game that genuinely improves as it progresses, though I can’t help but wish it hit the accelerator a little earlier.

As our brave bunny runs, jumps, swings, and slides her way through each stage, she is also tasked with picking up various collectibles either dotted around the screen, hidden in plain sight, or located through each stage’s bonus levels — single-screen challenges as compulsive as they can be frustrating. Gathering these gems, stones, and medals unlocks contextual artwork, with Kaze‘s narrative unfolding, picture-book style, as the player progresses. While Kaze and the Wild Masks is an entirely wordless adventure (there’s no speech or text at all), its delightful artwork allows players to understand its world, characters, and narrative, and I found myself really rooting for our mute heroes come the climax.

Occasionally, Kaze herself is called upon to don one of the titular “Wild Masks,” offering new skills and attacks based on Carrotland’s animal overlords. The Shark mask is equipped for underwater stages, the Eagle mask sees Kaze take to the air, the Lizard mask triggers pulse-pounding autorun set-pieces, while the Tiger mask lets you climb walls and defy gravity. You know, like a tiger? These brief segments offer welcome variety to the standard platforming action, while adding further character and depth to Kaze and Carrotland’s lore.

Kaze‘s charms are solidified via its gorgeous audio/visual content. Kaze and her enemies are bursting with personality, thanks to some beautiful pixel artwork and silky-smooth character animation. The violent veg are both creative and amusing, and one can only imagine the fun had at the design stage turning a variety of food stuffs into scary monsters. Each world sports its own look, with effective weather conditions or multi-layered parallax scrolling attempting to hide each stage’s somewhat hollow surroundings. If these visual elements have a flaw, it’s simply that the budget wasn’t there to offer more variety in both enemy and stage design, but the small, somewhat repetitive selection we do receive is top-tier. Even Kaze‘s screen transitions are creative and unique.

These thoroughly enjoyable visuals are backed by an equally beautiful score. Kaze and the Wild Masks‘ soundtrack features high-quality compositions with a traditional South American vibe. With its thick, heavy bass lines, tribal drums, and wind instruments, the soundtrack has a vibe recalling TV shows such as The Mysterious Cities of Gold, while picking up the frivolity with dramatic or amusing ditties for bonus stages and boss fights. PixelHive seems to be more than aware of Kaze‘s mechanical gameplay, and as such has compensated by offering a title that accentuates its attractive audio/visual package. Kaze and the Wild Masks looks and sounds modern, while its themes remain rooted in the past.

Similar effort has been afforded Kaze‘s overall polish. Crucially, the pixel-perfect gameplay is fine-tuned beyond reproach, with strict attention paid to pace, layout, collision detection, and control ingenuity. From a mechanical standpoint, Kaze is near-flawless, with the player feeling full, confident control over the character. While the adventure gets pretty tough towards its finale — hair-pullingly so at points — Kaze never feels as if it is stooping to “unfair,” instead embracing the retro mindset of “Keep Practicing, Keep Trying”… Remember that?

Kaze‘s main point of contention is irritatingly subjective: the ugly topic of cold, hard cash. At $30, Kaze and the Wild Masks is a tad pricey, especially when compared to some of its modern platforming brethren. The adventure will run you around six-to-seven hours on a first playthrough, with many more hours awaiting those who strive for 100% completion, tackle the game’s many time trials, or are lured in by Kaze‘s clear desire to become a speedrunning staple. For some players, the price tag might be a little high for what is — when all is said and done — a “retro” game. This is between you and your bank balance. I personally think PixelHive is deserving of the money, and if sales lead to bigger and better sequels, then it will have been more than worth the investment.

Kaze and the Wild Masks succeeds in its goal of offering players a misty-eyed memory of gaming’s golden era. But while Kaze excels with its attractive design, crisp gameplay, and a polished package, it needs to be clearly stated that it is strictly a callback to old-school platformers of yore, and lacks both the depth of a Shantae and the scale of a Bloodstained. As long as the player is comfortable with this fact, then they should have a radical time leading Kaze past gaping chasms, over collapsing bridges, through underwater terrors, and taking on the most frighting red onion you ever did see. Always eat your veggies, kids.

Kaze and the Wild Masks is an unashamed blast from the past, for better or worse. PixelHive’s love letter to 16-bit gaming surmounts budgetary and design shortcomings with a compelling challenge, luscious visuals, and an evocative soundtrack, all punctuated by a solid underdog spirit. Kaze‘s polished but formulaic gameplay will not be to everyone’s taste, but for those who long for the halcyon days when the platformer was king, it’s most definitely wabbit season.