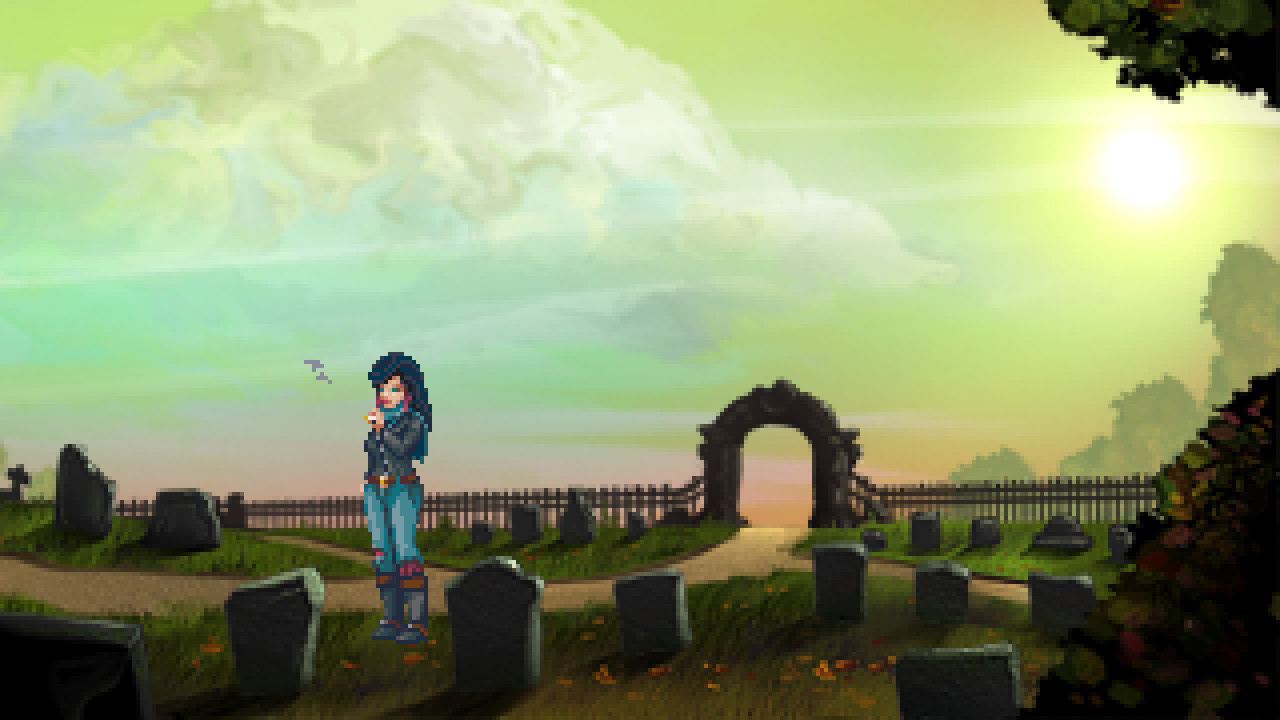 Every great modern detective has a vehicle that sums them up in a visual nutshell. Morse had the Jag, Columbo had that Peugeot deathtrap, Jack Irish had the Studebaker for a while, and to a lesser extent, the Scooby Gang had the Mystery Machine.

Kathy Rain is no different; storming around the quiet town of Conwell Springs on the back of her customised chopper, a.k.a. The Katmobile, in an effort to solve a decade’s old mystery. But between all that functional aggression on display, there was an unexpected beauty in the framework and fragility in its rider. Now, I might be skipping to the end of the ride here (if only to stop the puns), but Kathy Rain might just be the best adventure game I’ve played in a long time. 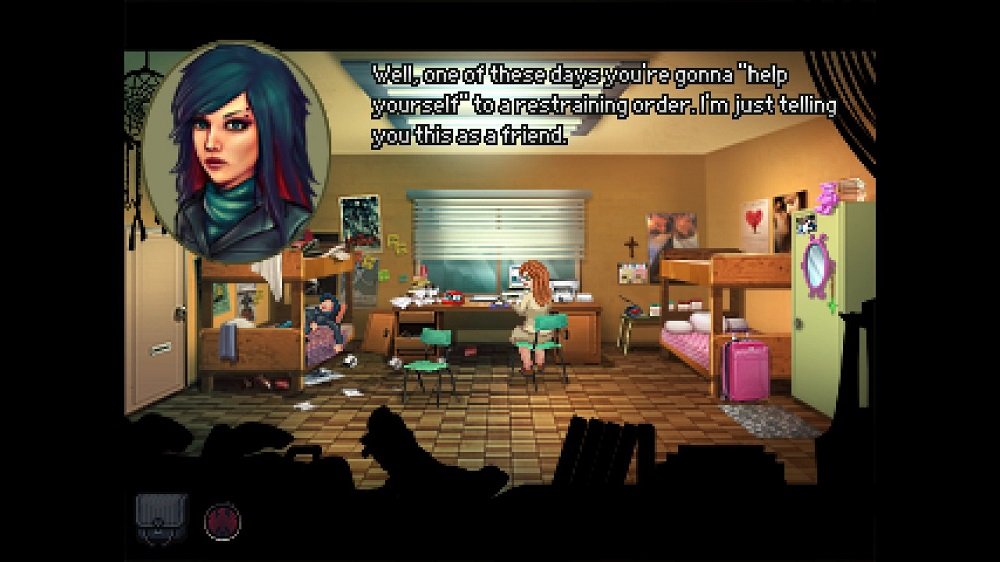 Kathy Rain, a journalism student with a rough-and-ready attitude, returns to her hometown just in time to see her grandfather put to rest. Reuniting with her widowed gran, Kathy learns that he’d been in a vegetative state for nearly all of her time away, and not long after he investigated the suspicious drowning of a teenage girl. Burdened by guilt and a need to fix the past, Kathy takes it upon herself to crack the case. But it’s only a matter of time before unseen forces put her tough-girl credentials to the test.

Kathy Rain is a taut, offbeat thriller from start to finish; an alt. rock riff on Nancy Drew by way of Twin Peaks. What opens as a fairly straightforward pulp noir, later develops into something more intimate and adult. And despite the Black Lodge surrealism of its final act, Kathy Rain sticks to the landing not only because of perfectly plotted clues, but the eponymous heroine as well.

Kathy’s rebellious nature is fun to watch, but all that arrogance and quick wit comes from a damaged place, covering up some shocking scars in the process. Yes, we get a strong female heroine, but not for the sake of a checklist or cliché. She’s portrayed as a very human character, throughout; sympathetic and mischievous in equal measure. Kathy Rain knows when to pull its punches and when to hold back, creating intrigue in its central figure as much as the dead girl she’s investigating. It’s not all doom and gloom, though. She also has the perfect foil in the form of her happy-go-lucky and devoutly religious roommate, Eileen. The odd-couple act works well, serving as a lynchpin for the game’s contrasting views on legacy and faith.

In terms of gameplay, it’s your traditional point-and-click adventure; the kind that’s been seeing a quiet revolution in recent years with Gemini Rue, Technobabylon, Resonance, and the Blackwell series. Those games are mentioned specifically because Kathy Rain shares their same indie trait of having their puzzles and solutions locked to one or two locations. Sure, it makes for a tighter experience, but it does make you pine for the LucasArts complexity of old. 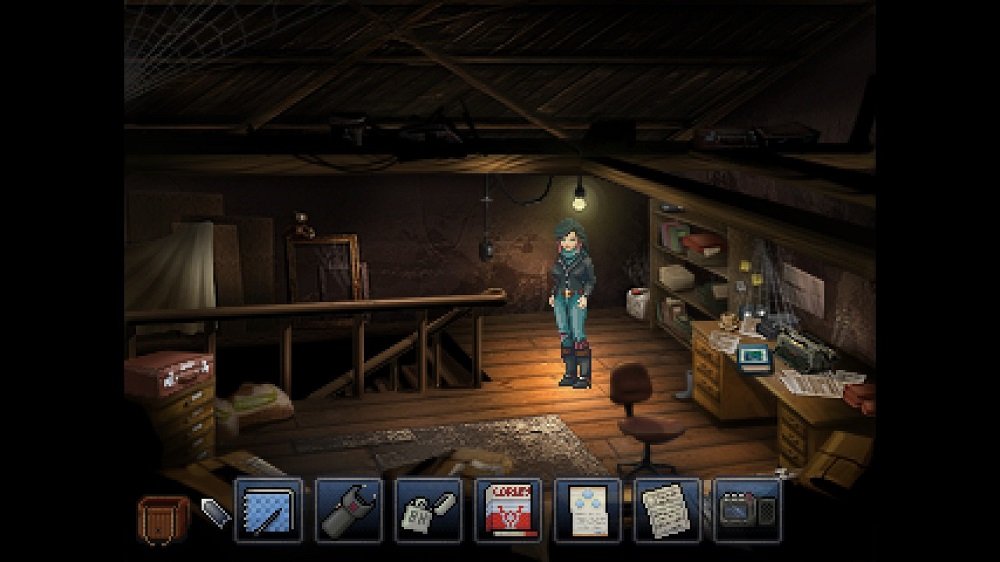 Speaking of which, seasoned adventureres will likely breeze through this one, not that it takes away from the ingenuity involved. Kathy Rain works best when you play detective and the game usually rewards you for such initiative, like asking the right people about certain places, or searching for names in a phone book. The game has at least four to five tough hurdles to solve, albeit in fun and refreshing way (especially the audio manipulation ones), but if you’re new, you actually don’t need to panic. Communication turns out to be its greatest strength.

If you’re stuck, or at least tried to think outside of the box, Kathy will always drop a hint if you’re in the right ballpark. A bad adventure game will always shut you down, with no hint of whether you were close or not – artificially heightening the challenge and killing the pace in the process – but here, you’re always a conversation or monologue away from good advice. It’s definitely the kind of writing adventure games need right now, and Kathy Rain does its best to guide you without being too obvious.

When a puzzle does fail, it’s usually through repetition or cheap logic. In one location, you have to use the same distraction for two separate items. Another time, someone uses Caller ID against Kathy’s lies, so when you call them from elsewhere, the plan suddenly works. It’s nothing game-breaking, just an odd dip in quality. 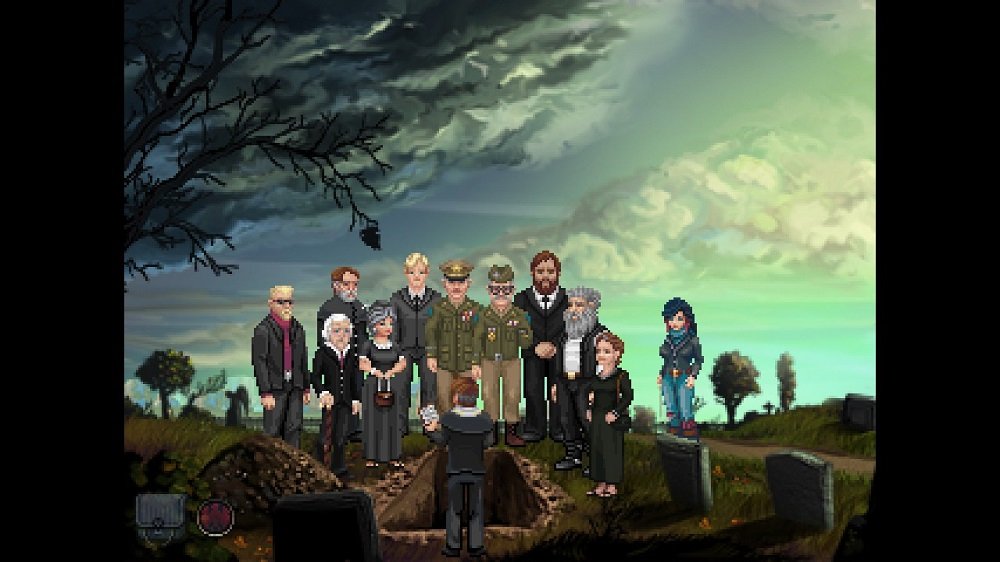 If there are any negatives, they’re mostly down to personal preferences and sequel hooks. The voice acting is mostly on point, especially from Kathy and Eileen. Both give these excellent turns of vulnerability and dark horse humour in what could’ve easily been one-note roles as Edgy Biker Chick and Female Ned Flanders. Admittedly, the supporting cast doesn’t always hit the same watermark, with the main antagonist being more camp than sinister, but I’ve always attributed that problem to Wadjet Eye’s Dave Gilbert when he’s directing, being far too enamoured with his leads to the detriment of the bit part players. By all means feel free to disagree, but I felt the same way about the otherwise stellar Blackwell series.

Compared to their current contemporaries, the sprites could do with some finer detail to match their portraits, but the locations perfectly capture the rural sleepiness of Conwell Springs. Though we don’t see much of the landscape, it’s the little snapshots that get their chance to shine; a rundown place by the lake, the dusty attic of cozy home, and a small-town jail cell to name a few. Each one is enhanced by a great soundtrack, too, flirting between soft synths and drum barrel beats for a neo-noir vibe. 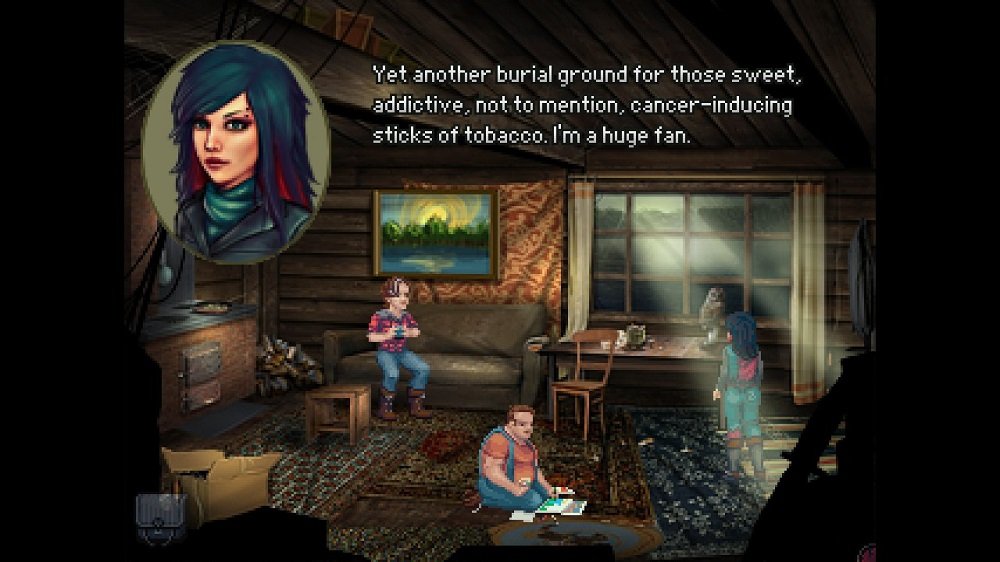 As with the Blackwell series, Kathy Rain holds its biggest mystery back in hopes for a sequel; though, thankfully, not enough to make it an unfulfilling experience. Like all good detective stories, the case is more of a reflection of the self, and Kathy is thoroughly deconstructed and reinvigorated in her search for the truth. In a way, Kathy Rain plays out like a solid TV pilot; a standalone adventure with likable characters and personal journeys that’ll have you tuning in for next time.

No hyperbole, Kathy Rain is yet another milestone in this resurgence of old-school point-and-click adventures. It’s a fantastic thriller, a remarkably deep and adult story about grief, transition, religion, and the personal decisions that make or break us, while being an engrossing adventure game for veterans and newcomers alike. I’d make a terrible bike pun here, but I’ve got nothing. I just hope Miss Rain comes roaring back with another mystery, real soon.

[This review is based on a retail build of the game provided by the publisher. Hamza Aziz, employed at Raw Fury Games, previously wrote for Destructoid. As always, no relationships are factored into this assessment.]