Games built around co-op have always had a place in my life. When I was younger, I had a lot of friends who were gamers, which made it easy to pick up and play multiplayer titles. As I grew up, I attended college, met more gamers, and then met my wife, who also plays games.

As such, I almost always have someone who is down to co-op. Thankfully, Kalimba not only has one of the best cooperative experiences around, but it also has a strong single-player element. 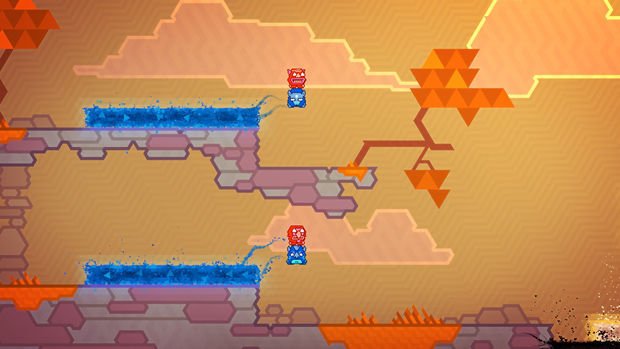 Kalimba has a quick setup so you can get on to the puzzlin’ and the jumpin’. An evil shaman attacks a cliffside town one day and kills its leader, shifting her into a spirit form that is able to possess totems and reclaim the homeland. The entire affair is narrated by a spirit animal named “Hoebear” who constantly breaks the fourth wall and provides background as you climb through the level-based progression; think Bastion, but a little less interesting.

On paper (or in screens, for that matter) Kalimba doesn’t look all that impressive, but in action, it’s gorgeous. I love the vibrant color schemes, the animations, and the designs of the totems themselves. They’re constantly moving or looking about, and have a ton of life to them. It’s also easy to see where they are, which is nice because the game can be extremely punishing.

Platforming is just as simple as the story, as there’s two buttons (one in co-op) to deal with: jumping, and “switching.” The gimmick is that there’s both a top and a bottom set of totems to deal with, which respond to the same button inputs at the same time. In other words, if you move, both move; if you jump, both jump. This is further complicated by the fact that both screens are not inherently the same, so you may have to jump over specific gaps at different times.

It’s just as fun and as challenging as it sounds, as you have to always keep both “games” in view. To help mix things up a bit, both screens (and totems) can converge in nearly every stage, allowing you to stack them on top of each other. Puzzles will also tend to use this formula as well, as each totem can jump off of each other, effectively creating a quadruple-jump ability. You’ll also need to stack “correctly” to pass through certain barriers unharmed. There’s a lot of thinking involved in Kalimba and it’s all the better for it.

“Switching” lets you instantly flip the top and bottom sets with the touch of a button. Since they tend to be different colors, you may have to switch to avoid color-specific barriers, sometimes in the middle of a jump. There’s also slippery ice, cannons, enemies, and much more to deal with. Great puzzle games often deal in diversity, and Kalimba has it in spades, often changing things up on the fly to help facilitate a more interesting adventure.

Like VVVVVV, the checkpoints are very reasonable, and abundant in nature. That’s not to say that Kalimba doesn’t make you work for them, though. You won’t be able to coast your way to victory. On top of that, the point system adds score for locating collectibles throughout each level, and detracts them for each death. It’s a great system because hardcore players can go for broke and casual fans can still complete the game without ripping their hair out.

Of course co-op is the main draw, and supports two players total offline. This time around each set of totems is controlled by a different player, and each player death detracts from the score, which is broken down at the end of the level. The amount of synchronization needed is crazy. It reminds me of ‘Splosion Man, which is easily a good thing — except Press Play decided to eschew a “countdown timer” button, so you’ll have to do it “manually.”

Sometimes, it will force one set of totems to take the lead and do a particularly difficult platforming section by locking out the other player with a color-based barrier. You can’t just rely on one person to get by, as both must learn the ins and outs of the game. Or you could always just pass the controller, but that’s no fun. 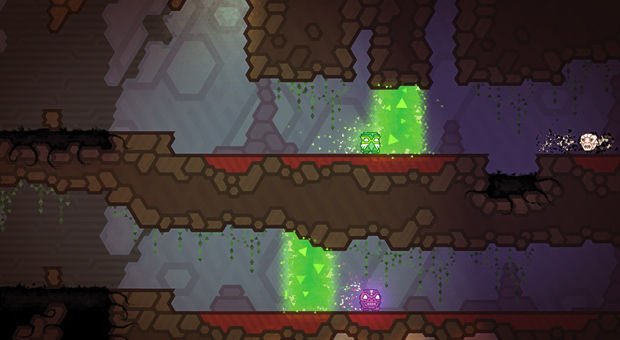 I really like that Kalimba has both a single- and multiplayer element, as both are worth playing in their own right, and you aren’t completed hosed if you don’t have a friend to game with. The switch mechanic in the former has a different feel to it, and since they offer different levels, I wanted to try out everything each had to offer. You’ll also earn extras through completion of each campaign, including a mode where one player controls two totems independently with one controller.

Kalimba is an enjoyable solo romp, but to get the full experience you’re going to need a local co-op partner; trust me, the juice is worth the squeeze if a couch friend is hard to come by. That inherently limits the game, but since both adventures are worth playing through fully, there’s a lot of meat here for a seemingly small puzzle title. I hope it gets more traction despite the fact that it’s limited to the Xbox One at the moment.