A simple adventure with a slice of insanity

[Disclosure: Jim Sterling, who provided voice work for Jazzpunk, was previously employed at Destructoid. As always, no relationships, personal or professional, were factored into the review.]

Describing Jazzpunk is pretty damn hard. It’s billed as a “comedy adventure game,” but it’s so much more (and sometimes less) than that. It’s packed full of references, oddball minigames, and voicework that will make you laugh more often than not. 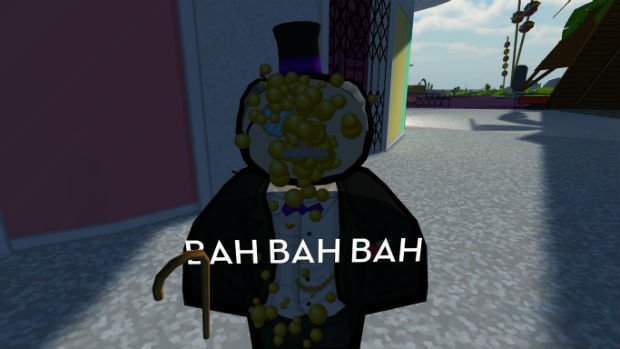 The vast majority of Jazzpunk takes place through a first-person viewpoint, much like the indie darling Gravity Bone. In fact, even the art style is reminiscent of Gravity Bone, as all of the characters look like Duplo block creatures with exaggerated features and strange accessories. While the art direction ranges from interesting to dull (and in some cases, unfinished), Jazzpunk does a great job of mixing up a ton of different styles, and I especially enjoyed the pop-out text that appears above character models that are speaking.

The story starts off framed as a spy thriller, tasking you to “infiltrate the Russian consulate” on your first mission. It’s a theme that it mostly keeps up throughout the roughly two-hour experience, but once you start randomly messing around the game’s various sandboxes you’ll probably forget all about the main task at hand.

While I don’t want to spoil too many of the game’s diversions, you might get sucked into a pizza box full of Evil Dead references to battle pizza zombies, play a random round of Space Invaders, swat pesky flies in a china shop, or play a modified version of Quake called “Wedding Quake.” The minigames aren’t groundbreaking nor are they all created equal, but Jazzpunk consistently keeps you guessing as to what you’ll find next.

The core story ranges from “interactive novel” to “hardcore adventure game,” but the former design is employed more often than the latter. Some puzzles involve welcome obtuse solutions like changing a clock to enter a certain area, where you’ll need to search for what feels like ages for the solution, but for the most part you shouldn’t have much trouble moving the story along — sometimes, to a fault.

In addition to the off-the-wall minigames you’ll also find a heap of comedy infused in the dialog, including the always popular Wilhelm scream, jokes like “If you need me, I’ll be in the wine cellar [under my desk],” and the classic “I photocopied my butt” joke. There’s also a ton of sight gags that range from childish whoopee-cushion pranks all the way up to GoldenEye 64 references, complete with the orange health and blue body armor bars on screen. 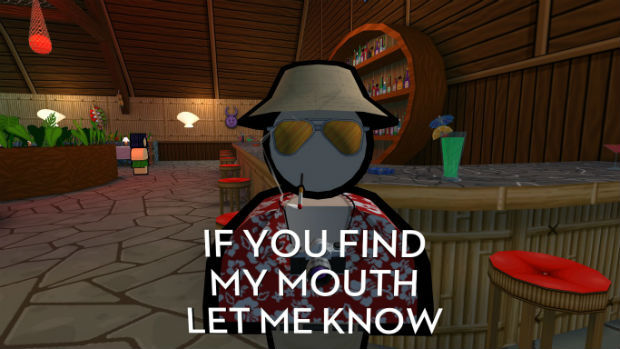 As cute as some of these jokes may be, Jazzpunk also dabbles in the macabre and sexual arena, with activities like microwaving live pigeons, or close encounters with robot sex workers. Sometimes it’s a bit too much coming at you rapid fire, but there’s a cohesive sense of style to Jazzpunk, including some hints of noir, juxtaposed to cool neon effects and unique animations.

The cast isn’t large but it’s well acted, despite the (intentional) muffled voices that add to the game’s sense of style. Destructoid alumnus Jim Sterling plays two characters in particular (one is pictured above), and is probably the best voice actor the game has to offer, playing both a male and female, the latter of which channels his best Rita Repulsa impression.

The “jazz” part of the moniker hints that there’s a large musical element to the game, which it pulls off elegantly for the most part. With an eclectic mix of jazz and electronic tunes the soundtrack sufficiently suits the mood, but some areas confusingly have music triggered when you enter certain zones — so the juxtaposition of different tracks happening at the same time is really jarring. 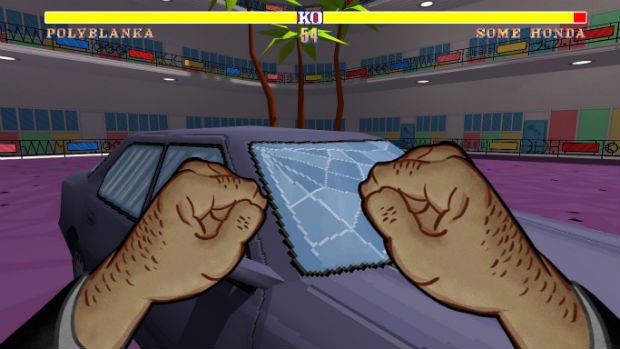 Control-wise Jazzpunk keeps things simple, allowing you to jump, strafe, activate objects, and use items. Sometimes it’ll morph into a light first-person shooter, but for the most part the game is relatively easy to control with very little complaints on my end. Controllers are fully supported, and the minigames are really easy to pick up despite changing control schemes on a whim.

“Simple” really is the key word for Jazzpunk, as there really isn’t a whole lot to it. You’ll wander around each area locating random references and minigames, some of which are funnier and more engaging than others. At times it feels like there’s really no purpose, because if a particular joke or area falls flat, it feels like a waste of space.

By the time I finished Jazzpunk, I was both left wanting more of its crazy world and feeling slightly underwhelmed. Many of the jokes felt a bit too random for their own good, and the story kind of just ends with no real resolution. If you’re not the type of person who likes to roam around miniature sandboxes and locate every single hidden secret, Jazzpunk may not be for you. But for everyone else, you’ll revel in the ability to play a completely missable game of Fruit Ninja with Jim Sterling.