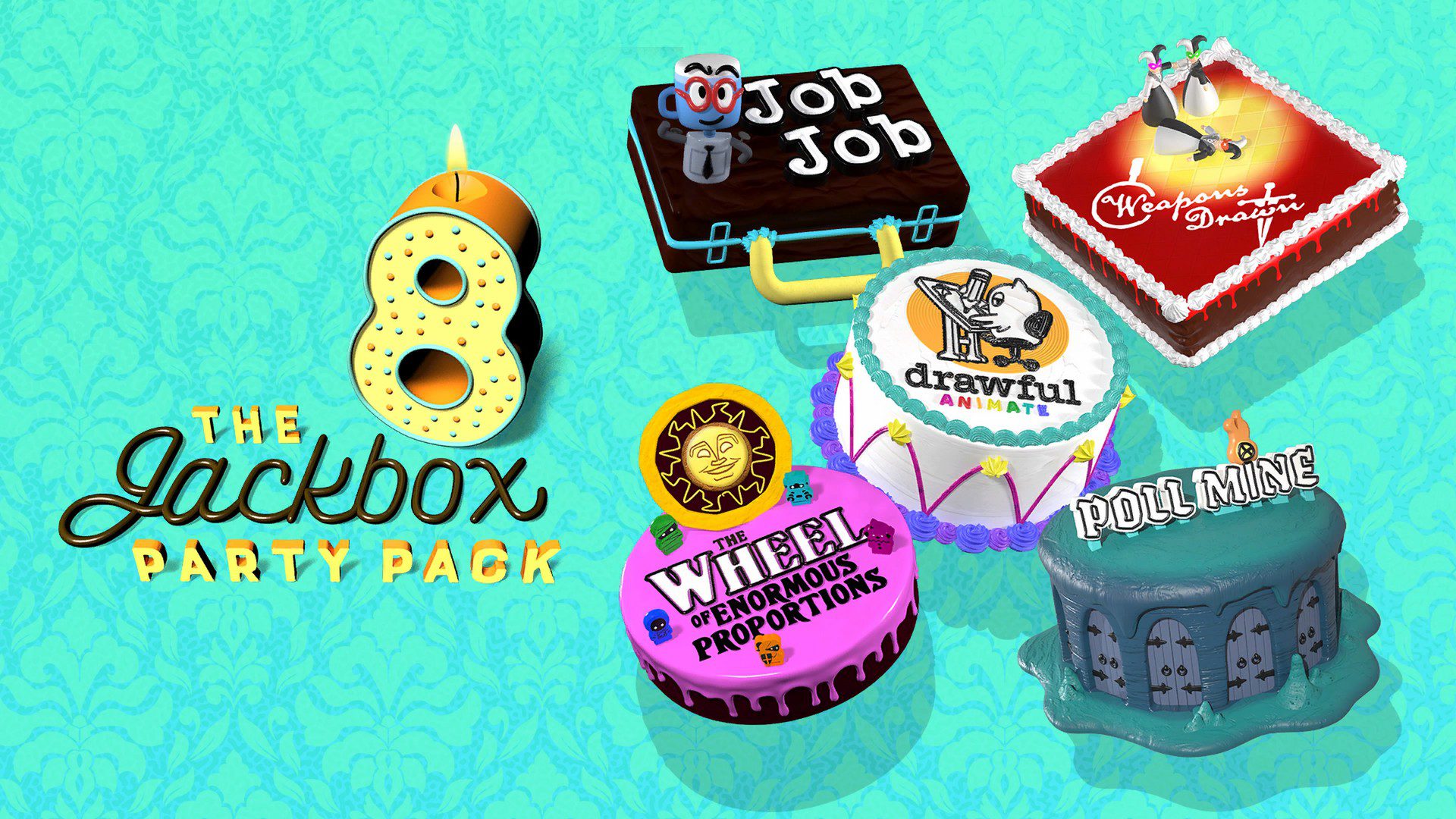 Everyone grab your phone chargers

Not to brag, but I’ve been playing Jackbox games since the very first pack, so I’m something of a long-time fan. Playing through favorites like Tee K.O. and Talking Points was how my quarantine buddies and I made it through most of lockdown, so they’ve become pretty close to my heart. Naturally, I jumped at the chance to check out the new pack for work. Well, I played it with those same quarantine buddies, and we all had some thoughts. 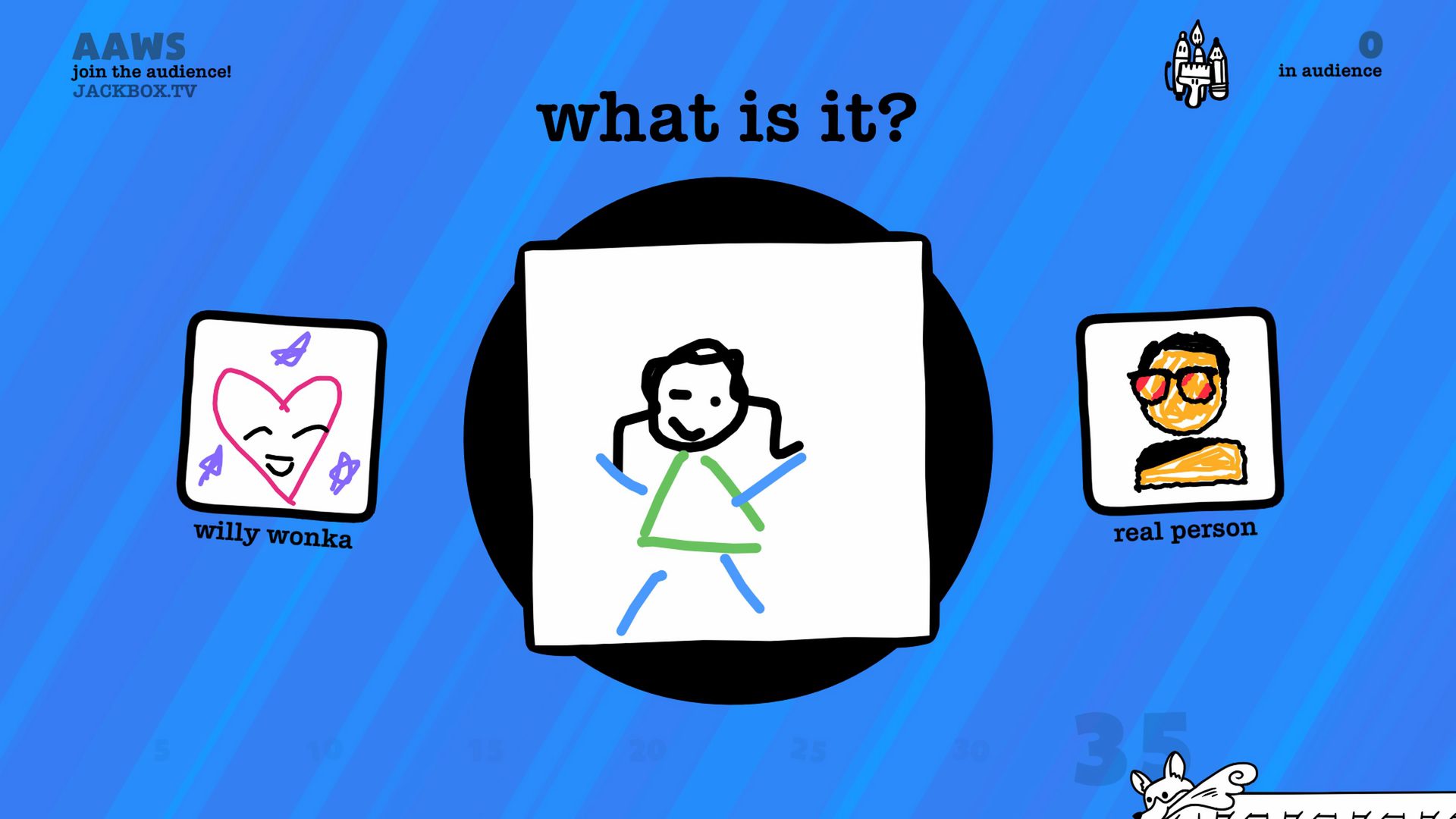 The first game featured in the pack was a returning classic with a new spin, which has become a staple of the Jackbox Party Packs. This time around it’s Drawful Animate (3-10 players), and classic Drawful rules are still in place — you’re asked to draw a ridiculous prompt, and after seeing the drawing, the other players submit their own titles. The twist, though, is that instead of a normal, static drawing, you actually have to draw a second frame so that it animates.

Let me tell you, as someone who has absolutely zero art skill whatsoever, I was nervous about how this one would pan out for me. Having non-judgemental friends to play with certainly helps, but otherwise the game makes it super easy to make my animations come to life. The prompts are also as wild as you’d expect them to be, which made for some pretty hilarious results. Drawful Animate doesn’t necessarily reinvent the wheel, but it doesn’t need to. It keeps a fan-favorite feeling new, and sometimes that’s all you need. 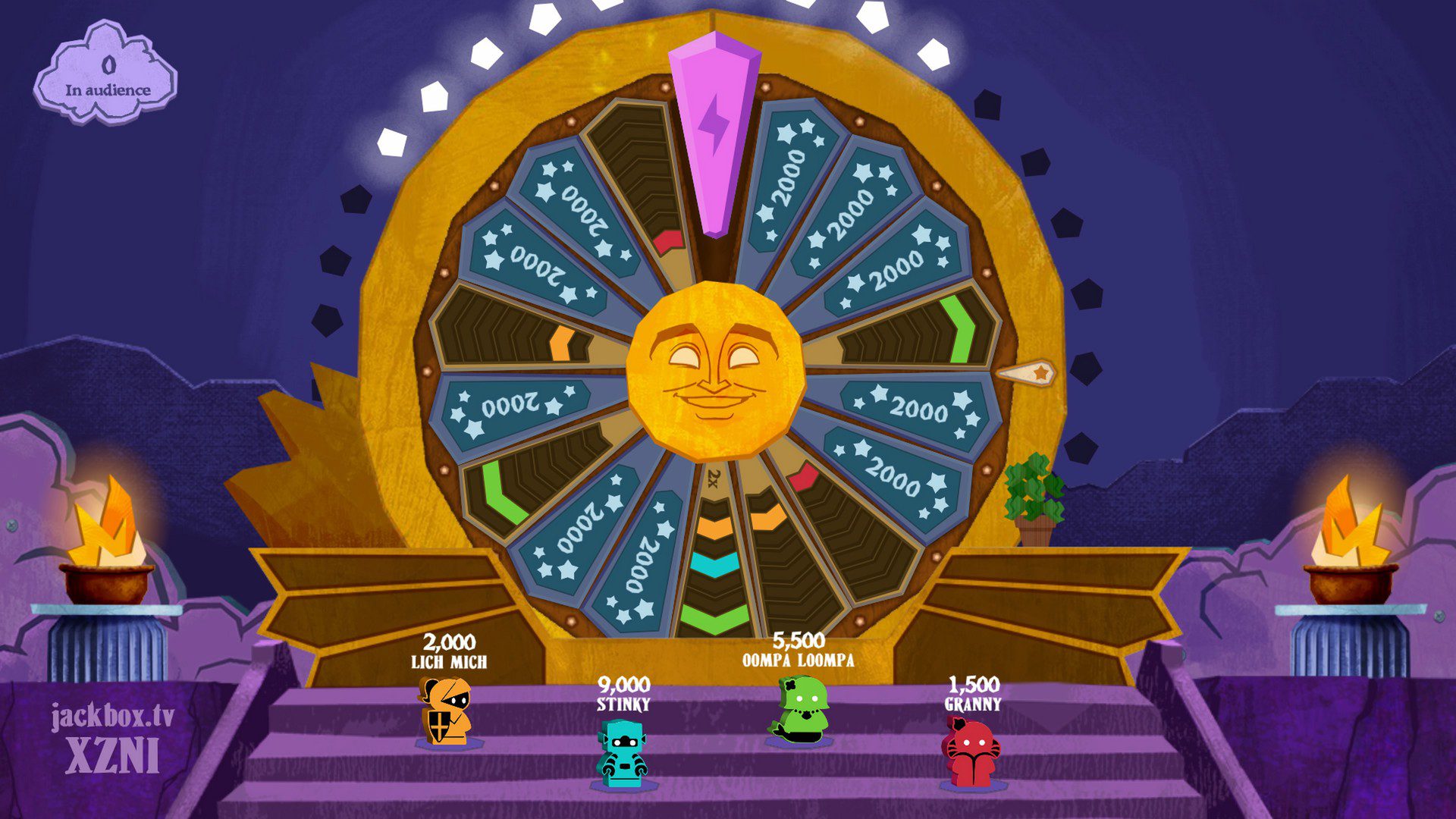 Next on the list was a combination trivia and wheel-spinning game called The Wheel of Enormous Proportions (4-8 players). Basically, you go through various rounds of trivia questions, and the better you do, the more pieces you have to put on a giant wheel. Then each player gets a chance to spin the wheel, and once you’re over 20,000 points, you get to spin another wheel for a chance to win.

I enjoyed the trivia a lot on this one — they give you a big list of possible answers and you have to pick the right ones out of the lot, kind of like a bigger version of the final round of Trivia Murder Party. It was pretty well balanced, although I do have one friend who is amazing at trivia so she smoked us in those early rounds.

Then you get to the wheel, and well, you spin and see what happens. Of course, there are chances to lose points, unintentionally give points to other players if you land on their slice, or steal points. I can’t lie, this portion of the game relied almost entirely on luck rather than strategy. The friend who was good at trivia, whose point total was more than double the rest of ours combined, didn’t even end up winning. If you like the chaos and unpredictability that element of randomness brings, you’ll like this game. 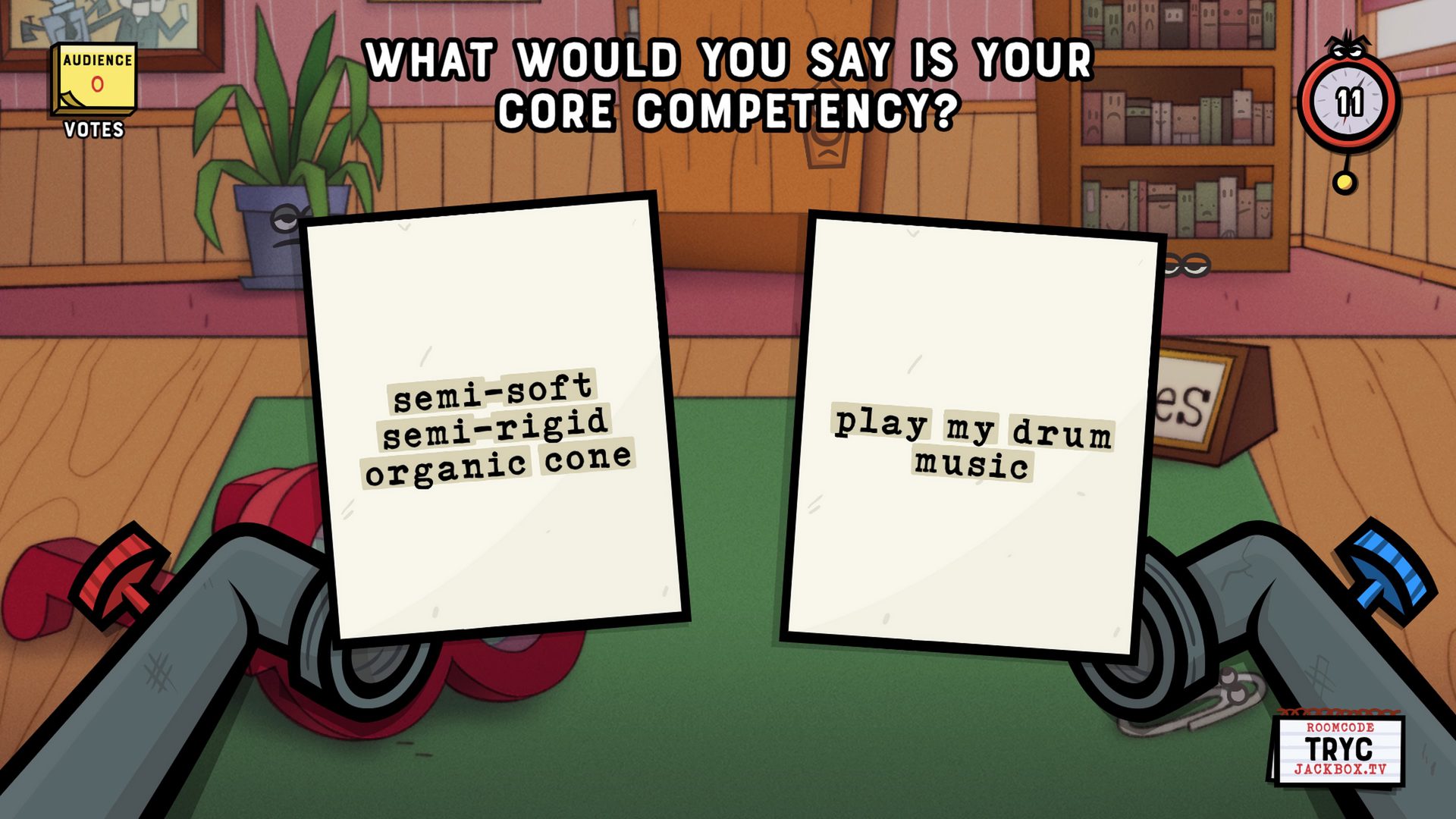 This led to some ridiculous answers, and I can say with confidence that this game made us laugh the most out of any others in Jackbox Party Pack 8. It was simple, but once we figured out what kind of answers to give for the first round, we were all cackling at the crazy stuff we put together. 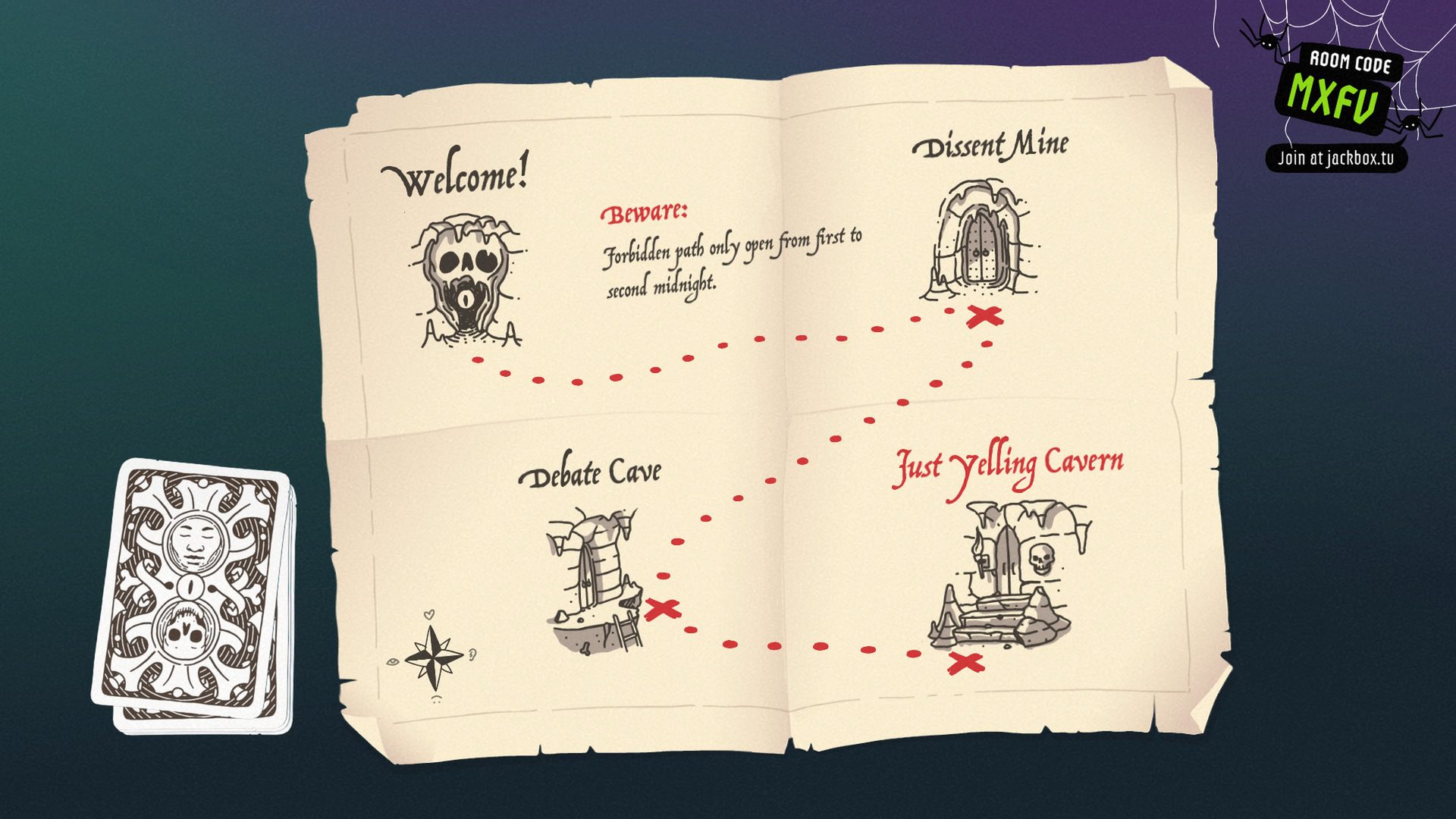 The penultimate game featured was called Poll Mine (2-10 players), which I thought had one of the most impressive art styles of any Jackbox games I’ve played. You and your friends are split into two teams, with the goal of escaping a dungeon (by getting the most correct answers). The game presents everyone with a poll that says something like “what is the coolest hat?”, and you have to rank your preferences.

Then, you take turns with the other team trying to guess how everyone collectively ranked those items. There’s some good strategy to this one, because you have to try and talk with your teammates to make a decision of what you think the answer is without giving the other team too much information.

There are some fun twists in this one, and overall I was impressed with the game design. Jackbox has made some moves in the past few packs to give us some more strategic games, and overall I think Poll Mine was pretty successful at that. 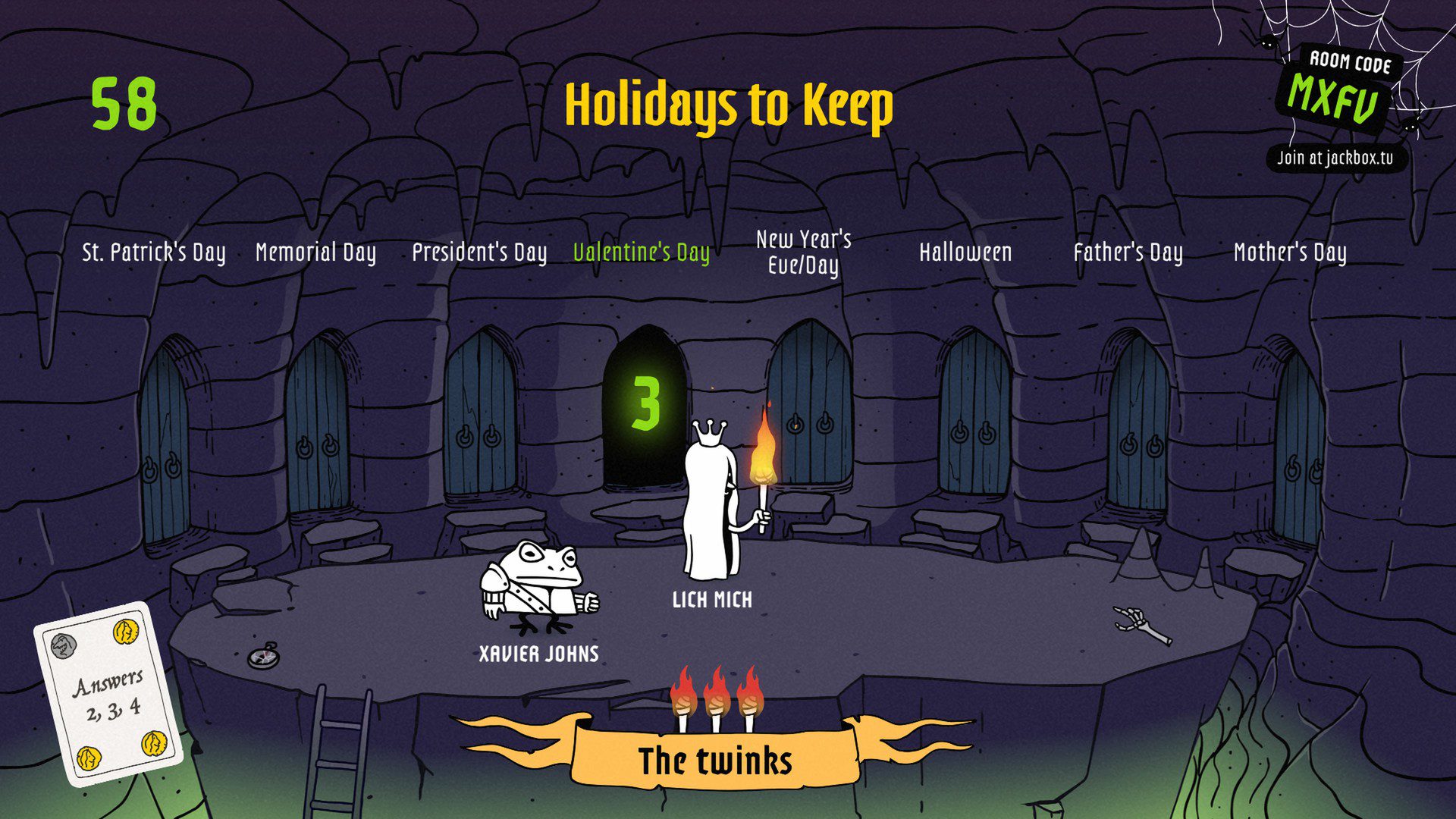 This game has multiple rounds, first where you do a drawing of a murder weapon where you hide a letter from your player name, then you come up with a name for your party guest, then you have a chance to murder someone else’s party guest if you can match them to the player, then when the murders happen you all have to vote on who would have done it, then you all confer and try to figure out who did it, and if it’s you have to try and distract away from your case.

As you can tell from that giant run-on sentence, this game has a lot of moving parts. Too many moving parts, my group unanimously decided. We had trouble understanding how or why we were switching between rounds in a few instances, and overall, Weapons Drawn turned out to be a bit more confusing than fun. There’s a good chance we just needed a bigger group, or to play it a bit more to get the hang of it, but this isn’t one that’s easy to pick up with a few friends after you’ve had a few brewskies. 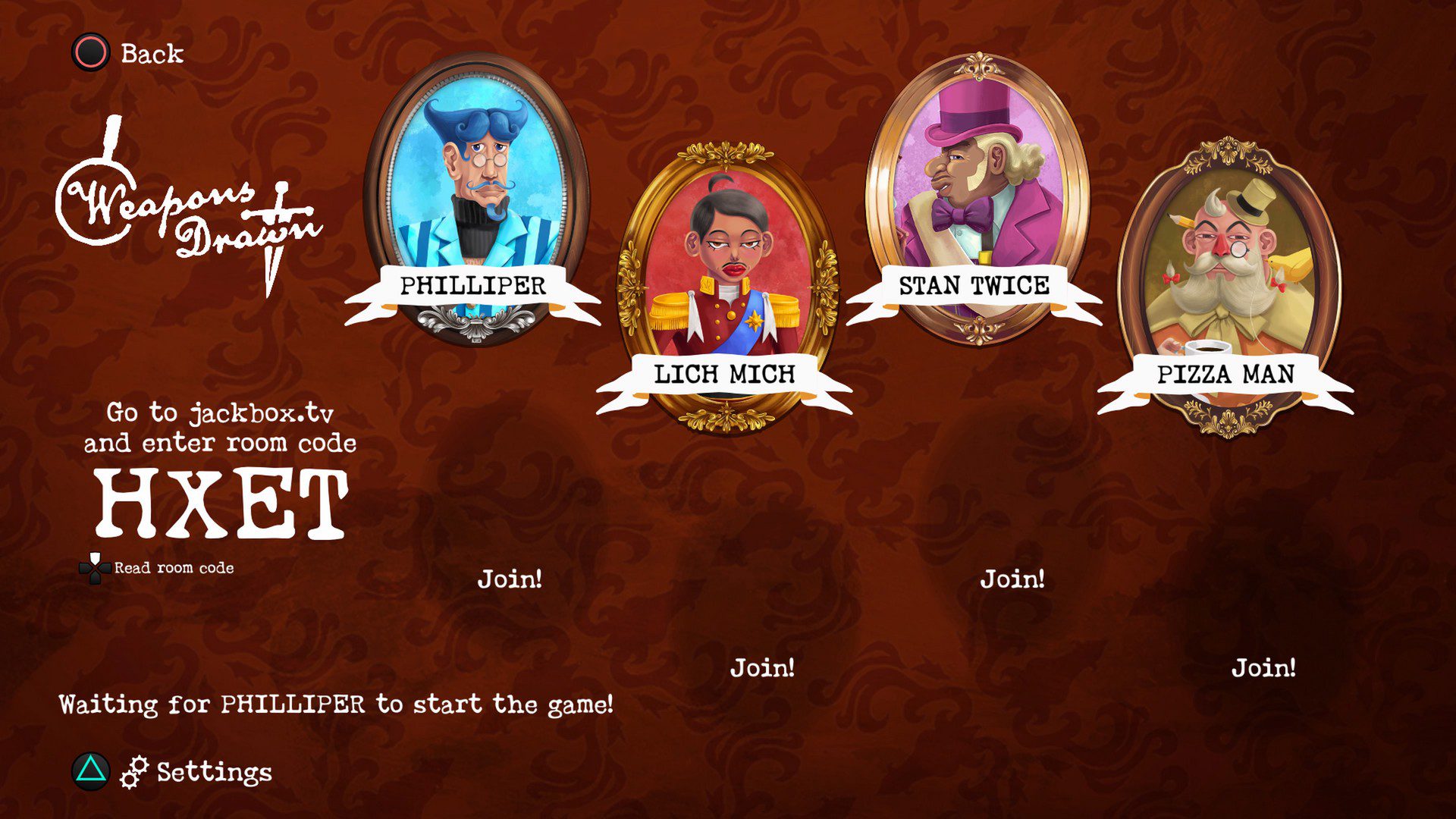 Unsurprisingly, Jackbox continues to raise the bar pack after pack with the production value. The art direction, animation, and visuals are stellar in Jackbox Party Pack 8, and my roommate who does voice acting for games remarked multiple times at how good the voiceover was. Another thing to note was that one of my friends said she had to switch between apps a lot when she was ordering food, and the reconnect button was working really well any time she had to come back into the game.

The settings menu was also very impressive, with customization options like turning on a family-friendly filter, different levels of profanity filters, and all kinds of things for streamers that I don’t know what they do, but boy, you streamers will find them super helpful. There are just some quality-of-life changes and accessibility options that are nice to see become more prominent as the Jackbox series goes on. 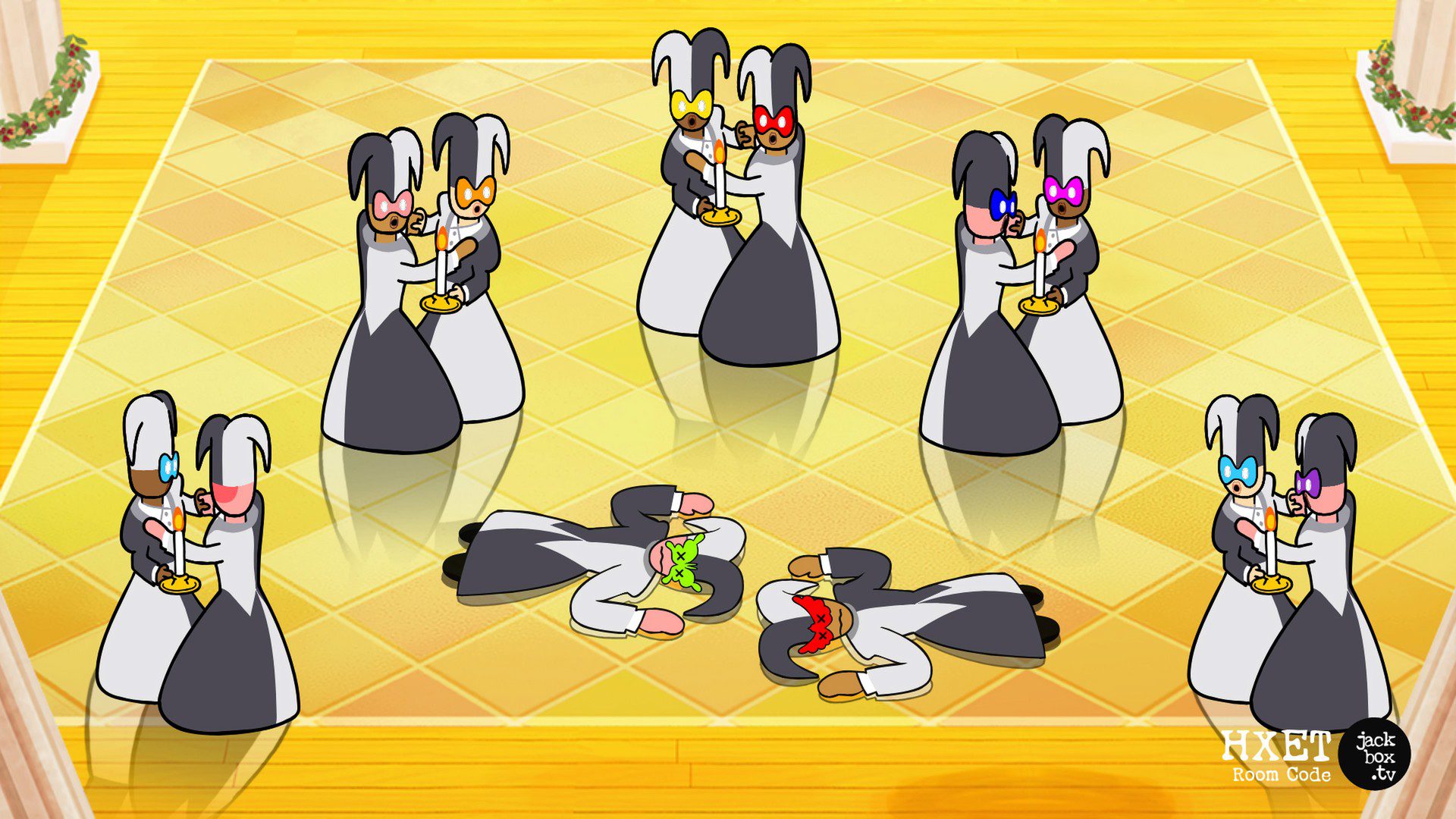 If I’m being brutally honest, this isn’t one of my favorite Jackbox packs.

We still had a lot of fun playing, but to me, Jackbox is at its strongest when the games are simple and let the interactions with you and your friends really shine. There’s a reason why Quiplash and Drawful have been so successful — they’re really good at letting us showcase our creativity, often to hilarious ends. I struggle with games like The Wheel of Enormous Proportions and Weapons Drawn because they’re so bogged down by a long list of rules, I might as well be playing a tabletop game. I know there are going to be players out there who really appreciate the attempt at something new (I mean we’re eight packs in, it makes sense they want a bit more variety), but I personally prefer the silly over the strategic when it comes to these kinds of social games.

If you’re a long-time fan of the series, I say it’s totally worth it to try something new, but if Jackbox Party Pack 8 is your first time trying Jackbox out, I recommend taking a look at some of the older packs first.