The scariest Stephen King adaptation yet

Summer is over. We’re entering the weekend past Labor Day.

And yet, officially, technically (sorry everyone back in school), we’ve still got two more weeks. Lucky us. Lucky that now, when someone comes a knocking slinging nonsense like, “The summer of 2017 was a real bust for Stephen King adaptations,” you can saunter back with a “Hold your horses there, hombre! What about It?” For The Dark Tower has already happened, already come, gone, and set itself direct for an early release on home theater as moviegoers and fans of the epic fantasy series weren’t sold. The Dark Tower, likely King’s most expensive adaptation, will be marked as part of one of Hollywood’s bleakest August and summer tallies in years. Then It happened, and while It can’t save summer, it surely can save King’s batting average.

It occurred to me to label this Stephen King’s best film adaptation ever. But that was premature, and likely very untrue. While a lot of Stephen King’s adapted work has been forgettable and largely a letdown from the material it sourced, the credits sheet is not without wins nor heavy hitters. Take, for instance, a little known film you may have heard of called The Shawshank Redemption. It was for years, and still is to this day, the IMDB.com user most highly rated film (it still just barely edges out The Godfather) — arguments on whether it’s that good or not aside, it’s immensely popular, and deservedly so.

Titles like The Shining and Carrie are horror and film classics. And many others are standouts. Many, many others. It’s why I keep framing this conversation by speaking of Stephen King, and not say Stanley Kubrick who directed The Shining, because King’s adapted works span over 40 years. This guy’s career as a provider of source material has outlasted that of all who have been directing the adaptations; it’s the only logical way to frame the conversation.

Here’s the sticky point and the parting of ways. Clearly, I can’t call It King’s best adaptation. Subjectivity and objectivity aside. It’d be going up against a few film behemoths, and many horror and cultural staples and classics (Salem’s Lot, Firestarter, and The Running Man, both of which were homaged in poster form just this week by Stranger Things), Pet Cemetery, Misery, Children of the Corn, The Green Mile, etc. But what I can safely say, and this is no minor statement for the man who’s long been known as the master of horror, is that It is Stephen King’s scariest in decades, if not ever.

It succeeds in several forms. First, for fans of the book or of Stephen King, director Andrés Mushiettie and the screenwriting team (including Cary Fukunaga) do a wonderful job of condensing over 1,1100 pages of source material into a two-hour film. Here they had some help, as this film only deals with half of the book’s material, following the characters both as children and then again as adults. And since It concludes with a bloody It: Chapter One title card, expect the adult character movie to follow as chapter two. Still, it’s a relatively faithful adaptation that holds true to many key points from its source material, and plot developments (we’ll get more into this). Secondly, It is terrifying.

And here’s the good news for Warner Brothers and anyone attached to the production team on the film: It is the right kind of terrifying. It‘s pull will span generations from teenagers to seasoned scare veterans; there’s something for everyone here as we follow the losers, a band of nerdy young kids through their misadventures with the shape-shifting Pennywise the dancing clown. This is not, by and large, shock horror, or torture porn — a dichotomy produced in clear lines by previews for the latest installment of Saw and Darren Aronofsky’s forthcoming mother! It finds a space in classification akin to something of a throwback where the point of the scary movie was not to disgust, disturb, or sicken you, it was to scare you. And It will succeed.

How do I know this? The film opts to forgo the time period of the late ’50s for the late ’80s. The ’80s are in right now. The recreated youth rooms featuring Gremlins and Beetlejuice posters, Slinkys, and wallpaper that can only be described as ’80s fit the nostalgia boom that marketers and content creators everywhere are trying to cash in on. The ’80s are hot, still, and this nostalgic play is working on two levels — not only are they setting the film in a world that’s very much Stranger Things, Stand by Me, and E.T. (with the gang of gangly youths riding their bikes through the forgone decade facing fear and adventure), but It is throwing itself back into that culture by being a horror movie from that period.

A horror movie that delivers many jump and screen moments, yet knows the boundaries of its audiences sanity and willingness to brave dark streets or empty parking lots to be scared. Thus, the scares are balanced with laughs, usually delivered brilliantly from the young cast as one-liners like “Look at this motherfucker, he’s leaking hamburger helper!” or “Go blow your dad, you mullet-wearing asshole!” 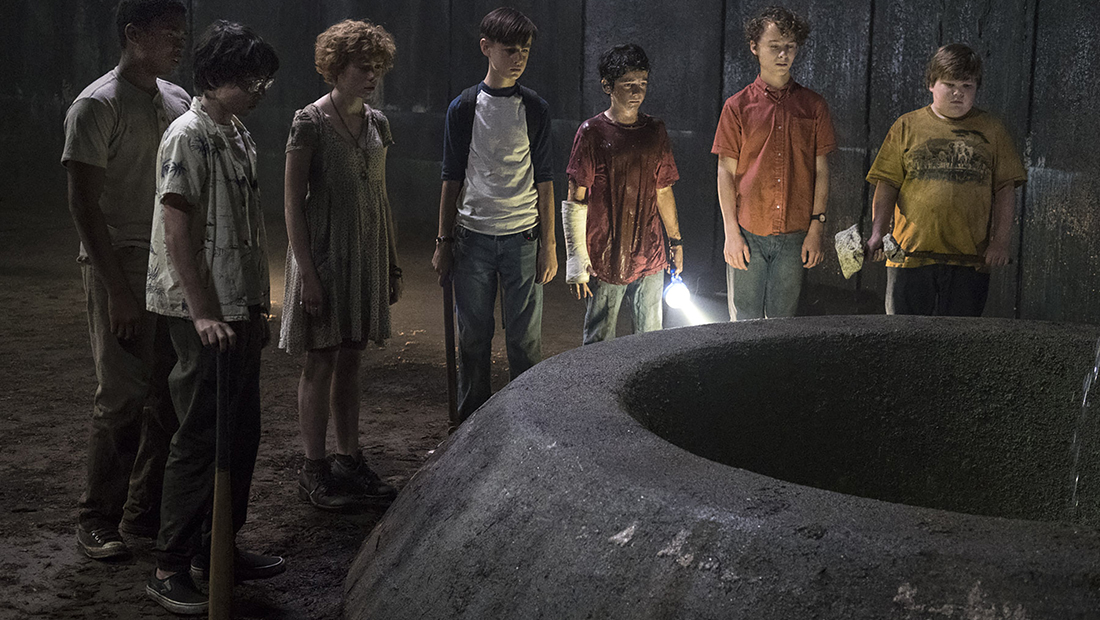 The laughter is requisite. Without it, you’d lose the broad appeal the film builds, and It does build it. From the moment an eerie doppleganger of the Warner Brothers shield suddenly cuts onscreen, the film takes your expectations and jerks you upright by them. Your luxury theater seating is no respite for the trip you’re about to embark on. Or, it wouldn’t be, without the laughter. It’s that balance of horror and camp that defined many ’80s horror franchise staples, and it works.

When It follows the opening scene of Georgie Denbrough (Jackson Robert Scott) taking a paper boat (were paper boats a thing in the late ’80s or did they leave that original, time period appropriate detail in because it fits the story) out into a rainstorm as older brother Bill (Jaeden Lieberher) stays behind, sick in bed, things happen quickly, and things are quickly put into overdrive.

We’re not used to seeing children killed onscreen. Usually, if they do die, it’s offscreen, or implied, but the opening violence of this scene was enough to shock my particular theater and set the proper stage of fear and darkness, and promise that this adaptation of It would not be the same as the 1990 television miniseries. While I vowed that Tim Curry would always be Pennywise to me, he quickly becomes a distant memory while watching this film — so much so that by its conclusion, I hardly considered there any other Pennywise than the one I’d just watched. Bill Skarsgård makes Pennywise his own, effectively stripping the title from his predecessor, and with ease. True, the movie helps. This vehicle is a more effective conveyance for clown horror than its made-for-TV predecessor, but it changes nothing. 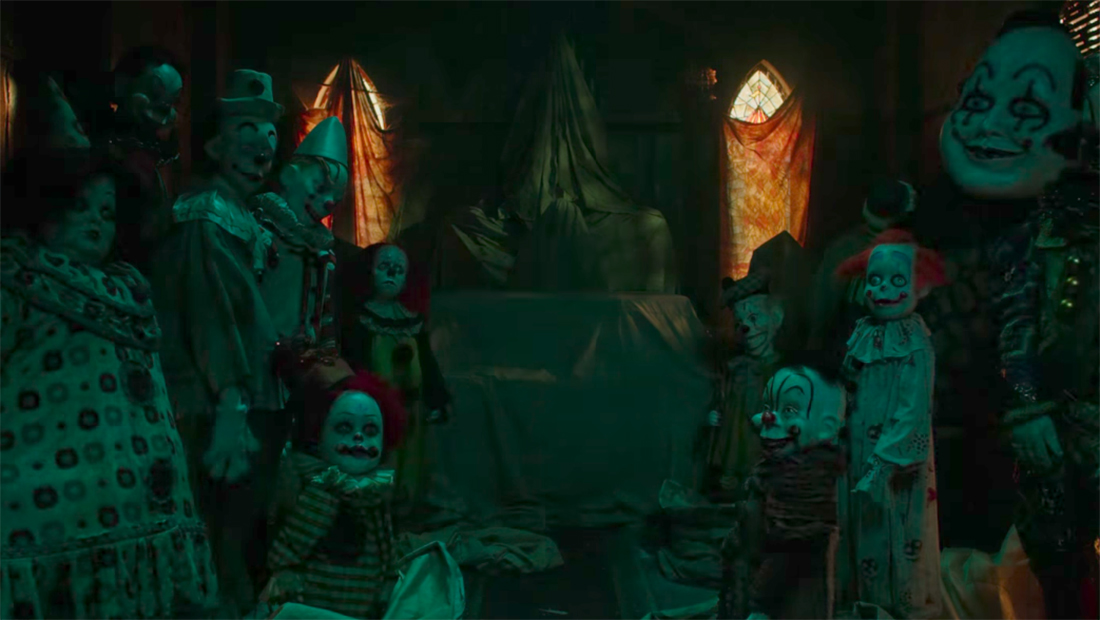 But some of the phobias brought to life in the film aren’t perhaps as scary as their literary counterparts — particularly, a batch of large, flying leeches that I expected to see onscreen never appeared. And when a group of bullies stops overweight, young Ben (Jeremy Ray Taylor) and starts to carve letters into his stomach with a knife, I was both shocked that this made it in the film at all, and surprised that they didn’t complete more than a few strokes of the knife, and it was not going to be “FAT” as dictated by source material; clearly, it’s OK to insinuate that new fat kid at school would be the target of bullying, but actually going so far as to have bullies body shame him by carving the word onto his body is going too far.

Yet, as you might expect in the ’80s, using “faggot” as an adolescent insult was OK. Just something to ponder — I suppose by showing an antagonist is willing to carve anything onto a person is as effective enough at conveying their mental state than needing to make that specific point. 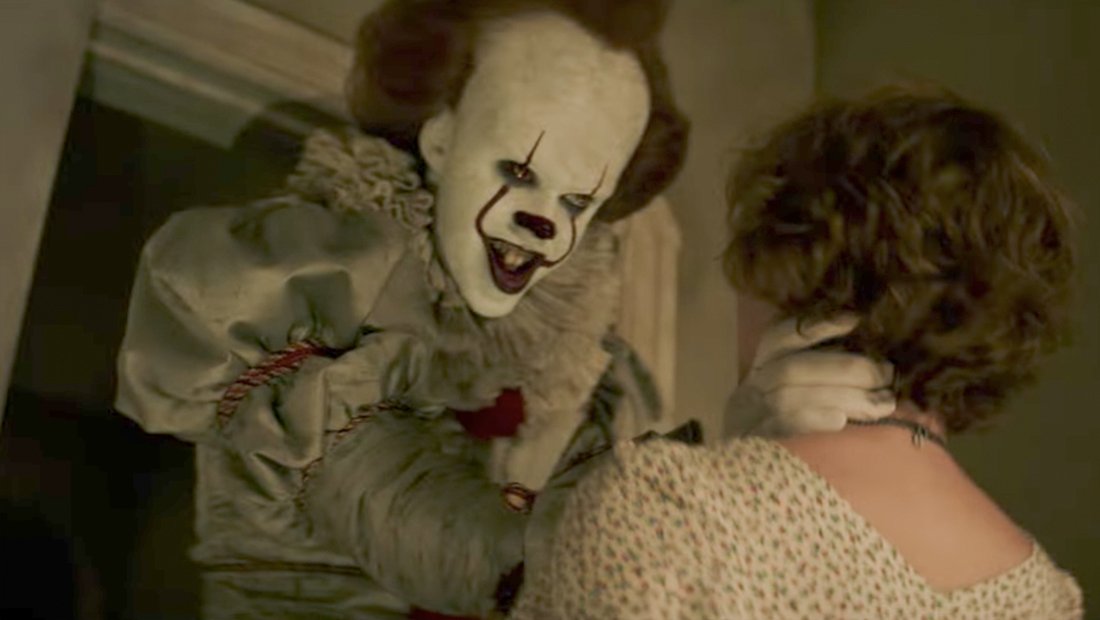 And it does do that. These bullies are believably unhinged enough to carve a name on someone’s abdomen, or do some of the things they later do which is important because trying to develop motivational psychology that explains character behavior in any film is challenging. But in a horror movie, with a diverse cast, and with child actors, it’s very tough — yet the film nearly pulls this off.

It’s believable, yet rushed, and while we follow the insinuations for the archetypes (a father who’s sexually abusive to his daughter; a father who’s physically and emotionally abusive to his son; the hypochondriac mother; a dad who just won’t listen), there’s barely enough time to build these narrative rationales, but it’s done successfully enough that it passes the believability test and doesn’t interrupt narrative flow — the most important thing. And really, nothing does.

The film moves from set to set effectively, creating the surreal environment that is Derry, Maine, the small town where It takes place and where people die or disappear at “six times the national average” (and it’s noted that for kids this statistic is much worse). It’s idyllic, yet something’s off. There’s terror, and an awareness of such as signs advertising curfews illustrate, yet there’s a blatant lack of true awareness as to what’s happening, and while it’s only touched upon, this inability by the adults in Derry to actually see what’s going on is given reasoning, if unexplained — so when a group of purported 11-year-olds (the film doesn’t own their ages exactly) set out to fight a monster, you believe that they have no other choice, rather than the usual exclamation of why don’t they get fucking help! 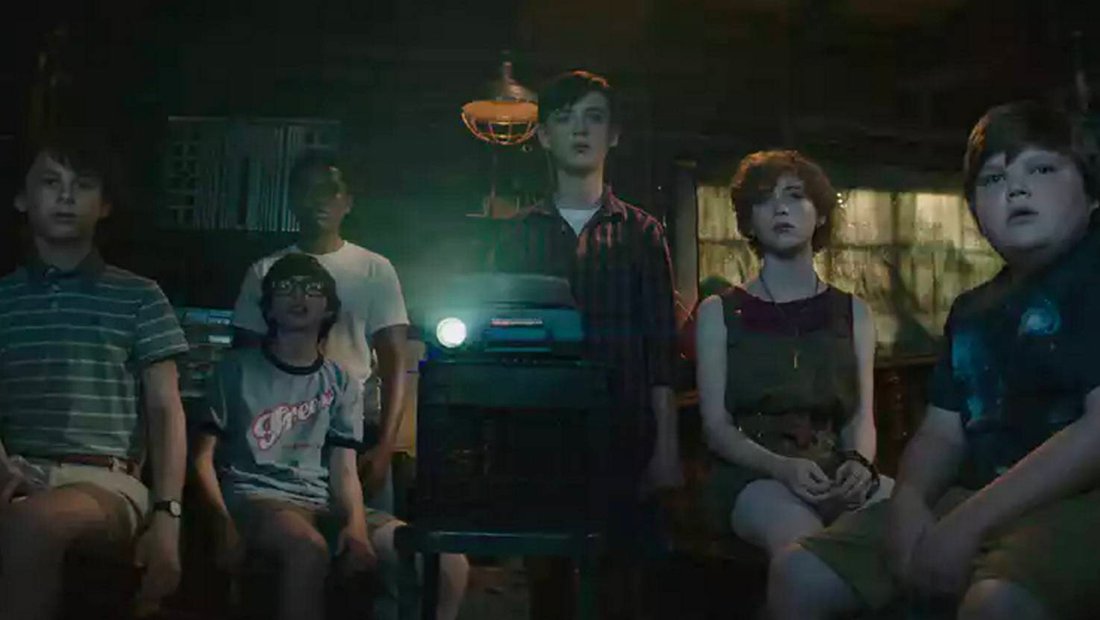 In no small part is this credit not owed to the cast. I’m not sure where they’re finding these kids, but they’re talented and believable actors. Special nods to both Taylor and Sophia Lillis, the later of which has tremendous presence for someone so young. This is not The Sandlot where the acting is exaggerated and perhaps farcical, this is real acting that portrays childhood curiosity, unfiltered and unschooled language that defines adolescent conversation, and when appropriate, real terror. When one of these kids utters “fuck” or “shit” you get where they’re coming from, and in modern nomenclature, there’s no real better reaction.

It uses the upgraded technology developed since 1990 to great applause, successfully selling its scares with more effective grotesqueries than you might expect and capitalizes on tension that’s not reserved for dark and desolate settings, but is just as likely to strike next to a stream on a sunny day as it is in a dank library under-cellar. You’re never really free from that tension, although the juvenile ribbing allows you to take a breath, adjust your jacket, and maybe dare a handful of popcorn before wrapping yourself back up in the credo “remember, it’s not real.”

Oh, and if you don’t like clowns, don’t see this movie. Facing your fears is only going to make them worse.