Short-form horror could be called my latest obsession in gaming. Horror can rarely be sustained for long periods of time. Compare your reactions at the beginning and end of a game like Resident Evil. In general, once you have the mechanics down and can read the game better, it’s not as scary. In a short-form game, you’re rarely given the luxury to really get comfortable.

David Szymanski may be most famous for Dusk, but he’s certainly no stranger to the short-form horror genre. However, unlike many of his peers, he tends to deviate from the trashy but innovative slasher genre to take a more experimental approach. Games like A Wolf in Autumn and Fingerbones. For his latest creation, Iron Lung, he takes us to the scariest place on Earth: the bottom of the ocean. Except it’s not on Earth and the ocean is made of blood. Still. 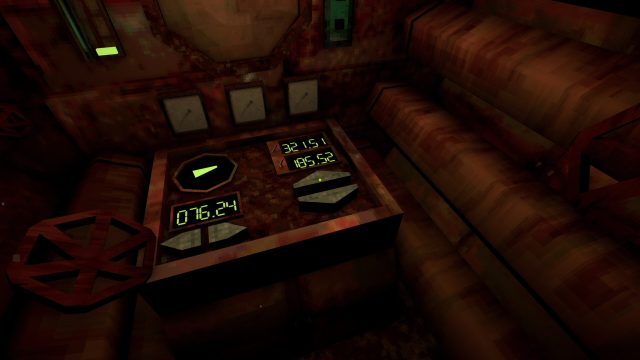 Far off in the future, humankind has extended its prehensile fingers to the stars. Then it all suddenly goes wrong, but not in the usual sci-fi way. Instead, some mysterious force plucks all the stars and liveable planets out of the void and leaves the remaining humans – the ones unlucky enough to be on ships and space stations at the time – floating with nothing more than darkness, trash planets, and endless suck.

Being the parasites that we are, the survivors attempt to find something new to feed off of on the dead moons and barren worlds that they were left with. On one particular planet, a sea of blood is found, which sounds like a good indication that there might also be a mountain of meat nearby. No such luck, so they’re sending you down to do a little recon for something tasty.

Don’t get too excited. Your crappy submarine wasn’t built for these depths, so the hatch is welded shut and the front window is closed. Your only way of navigating is using a map and coordinates. If you’re feeling sassy, you can take a photo of what’s in front of you. Unless you absolutely and inflexibly need visuals to maintain spacial awareness, photography is your worst option for navigation. It’s mostly there so you can accomplish your objectives and assure yourself that you aren’t about to get eaten.

There’s a lot to be afraid of. As you travel from node to node on your map, you’re left with only your imagination to theorize on what those sounds are outside your sub and what just triggered your proximity sensors. Your submarine is also extremely small and rickety. Hardly a trustworthy partner in this expedition. I hope you’re not claustrophobic because the cramped environment alone might make you pee a little.

Iron Lung almost seems like the terminal destination for sensory deprivation. Video games have long used things like darkness and fog to limit our vision, but in Iron Lung you essentially have none. You can’t even really rely on your hearing, though the sound design is absolutely phenomenal. It can be tense when you suddenly hit something that didn’t show up on the proximity sensors, and you run back to hit the camera to see if it’s still there. Is it really more comforting if nothing is there? The whole experiment can last under an hour depending on how much time you spend curled up in the corner or how carefully you navigate. It’s long enough to get its thesis across, then stops before you start feeling safe in your metal womb.

I didn’t find Iron Lung to be that scary, but few horror games can claim to frighten me anymore. Perhaps it’s because I adopted the philosophy of keeping my head down and working since there is little else I’m in control of, which I’ve learned through my days of being an anxious but functional depressive. I can’t say for sure what your risk of pooping-while-playing is.

At the same time, the design of Iron Lung captivated me. It’s a brilliant approach to the horror genre. It keeps you feeling perpetually vulnerable. There is nothing to help you and absolutely no escape. Your only option is to keep pressing ahead, as there’s no rescue until the job is done. Don’t get distracted, ignore the sounds. Hurry, but be careful not to bash into a wall. I don’t think it’s possible to represent that idea better in an interactive medium. Iron Lung really is the perfect short-form horror experience.