It has been an excruciating year for me. When I took a look at DUSK in early-access back in January, I was in love. The game was everything I had wanted from a first-person shooter since the ’90s passed. No regenerating health, no hit-scanning enemies and no guided tours through levels that might as well be hallways. This was a replication of the games I cut my teeth on in my youth.

Teases of the content in DUSK’s episode three eventually gave way to me playing a very early build in April. After that, I was given a more in-progress build that featured final refinements but lacked the ultimate finale. I kept digging through these levels and finding new secrets, concocting faster paths and honing my skills. I was ready for the conclusion to DUSK, even if I never wanted to stop playing.

I can safely say that this journey has been well worth it. DUSK may just be the best shooter I’ve ever played. 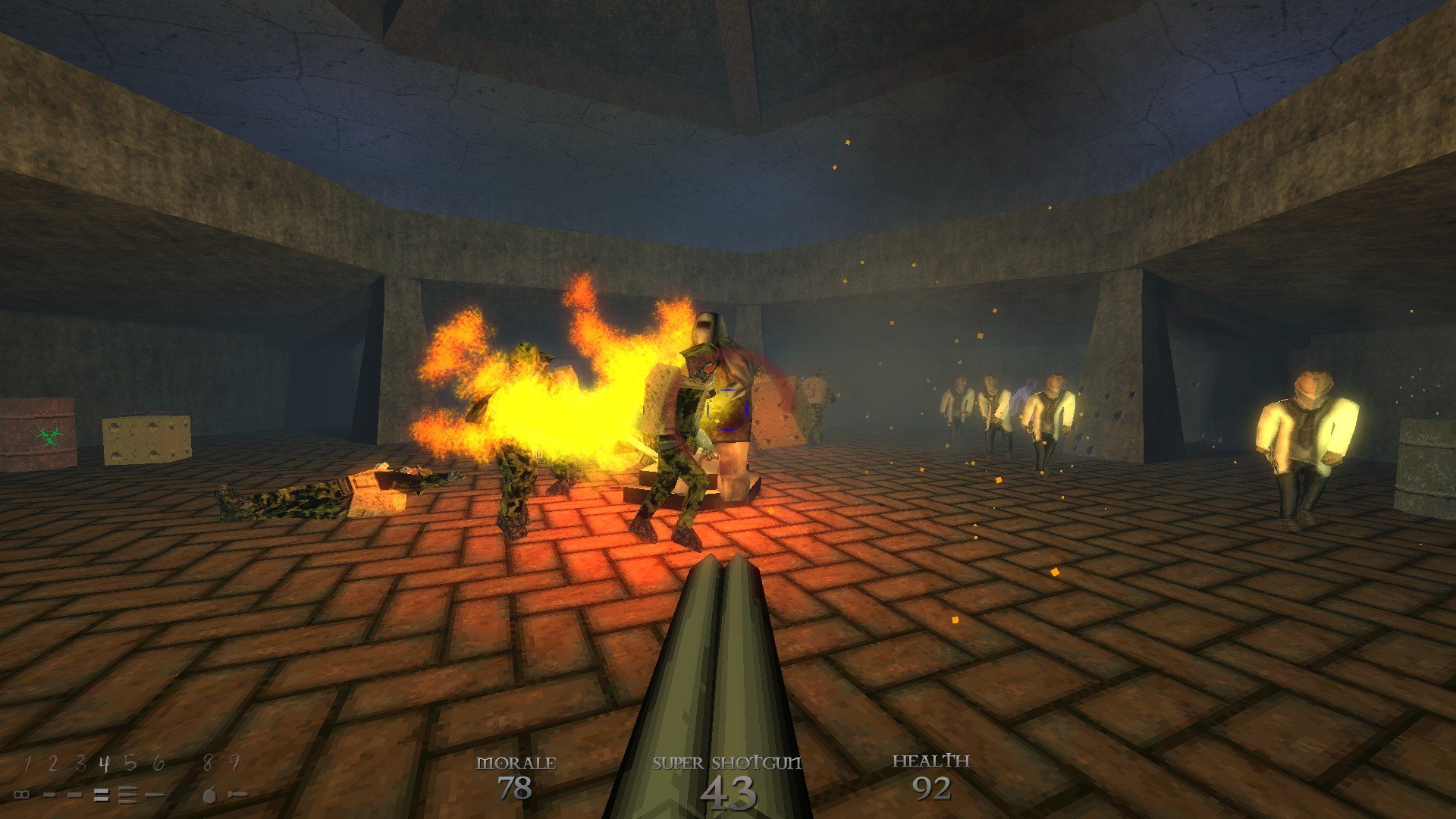 Plot isn’t why you’ll be playing DUSK, but I’ll try my best to summarize what is going on. Occupying the boots of the aptly titled Dusk Guy, you set off on a journey through a demented farmland to stop some eldritch terror from destroying the world. Getting in your way is a multitude of various enemies from the likes of chainsaw-wielding brutes and cloak wearing cultists. Later on, you’ll start to see some really messed up shit that wants nothing more than to eviscerate you.

Your quest starts pretty humbly before it gets grander and grander. Using an episodic structure similar to genre classics, DUSK makes sure each segment of gameplay feels distinct from the last. The overarching theme in episode one might be more realistic, but it eventually gives way to wild level designs that defy logic and take first-person exploration to boundaries it hasn’t been in a long time.

Unlike classic shooters, DUSK actually saves the best content for last. The first episode is quaint in comparison to what comes later and as such, does a fantastic job of introducing to you how DUSK plays and what you might expect to encounter. DUSK is anything but predictable as each new level focuses on a different concept that gets played up to its fullest extent.

While I could pick any number of levels to highlight, the most exciting one has to be the “Escher Labs” in episode two. Themed after the paintings of M.C. Escher, the level begins like any other scientific themed lab before it starts to screw with your perception of reality. You’ll walk forward only to be greeted with the beginning of the level and everything tilted on its side. This keeps getting more and more contorted before you’re jumping through walls and seemingly going up by dropping down. It’s a real brain twister.

Episode three, though, just steals the show. It may feature a horde like level where you do nothing but kill, but the puzzles and eye candy contained are beyond what I imagined DUSK could achieve. Earlier levels start to make a comeback in a Groundhog’s Day styled fashion and there is a level set in a “Xen” like universe from Half-Life that really plays with gravity in some interesting ways. Unlike “Xen,” the level doesn’t suck, so it has that going for it.

Let me tell you, I’m surprised at how creepy some of the levels can be. Coupled with the excellent sound design and soundtrack by Andrew Hulshult, DUSK could possibly pass as a horror game at times. Arenas will get pitch black, bugs will be crawling around the ground and monsters will be moaning while you’re stumbling about in an unfamiliar place. I honestly jumped a little when a certain invisible enemy popped up the first time (despite knowing he was there!). 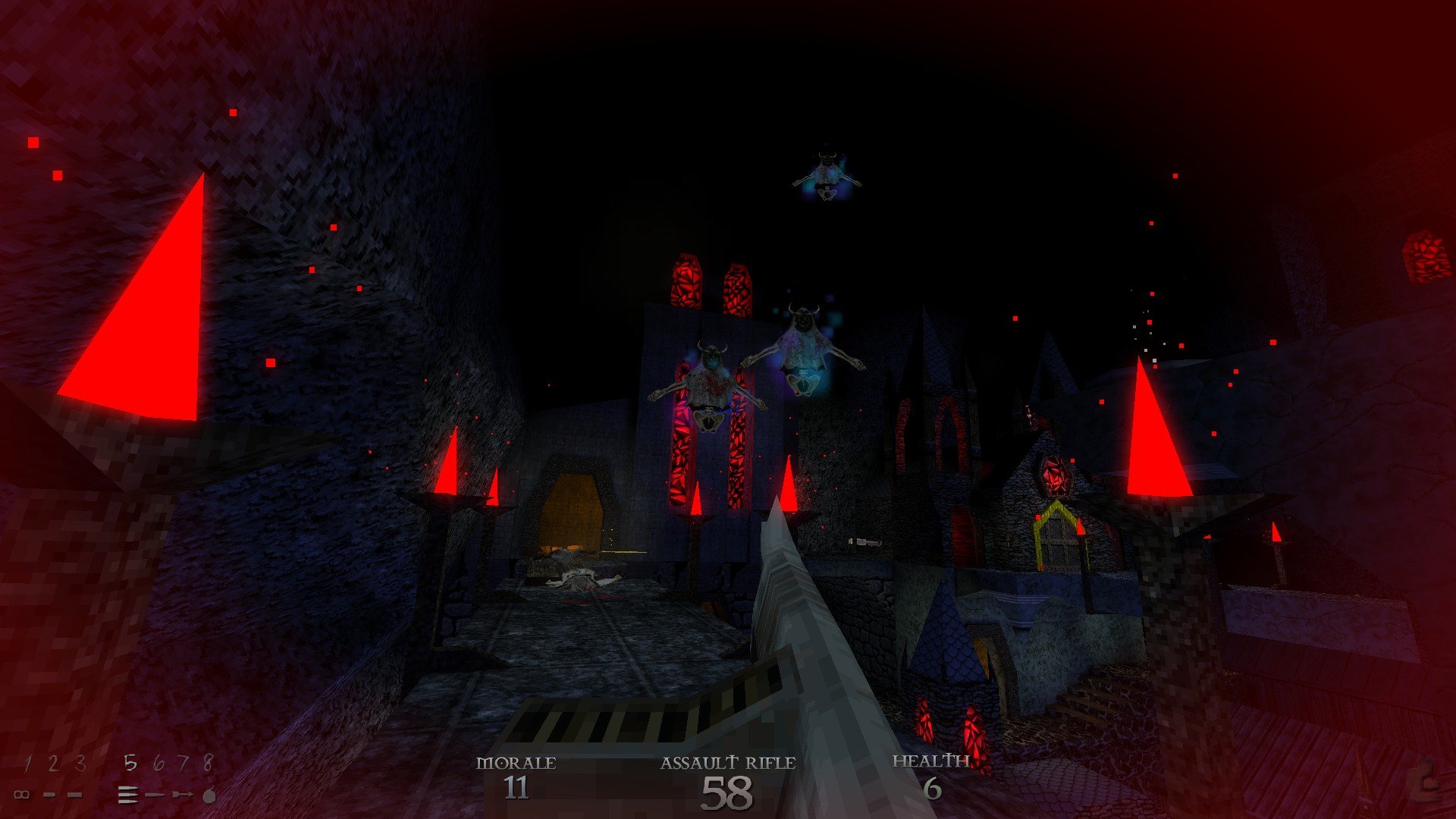 It is rare you’ll ever get lost in DUSK, however. This isn’t because the game is easy, but more because levels have specific architecture and set-pieces to keep you from getting confused. Unlike older shooters that had limitations on the number of textures or models that could be used, DUSK has wholly unique level sets that are visually different. While the lack of a map screen might put people off, it never feels necessary with how well the game organically guides you through its demented corridors.

None of this would really matter if the weaponry was bad, but DUSK has that on lock. All of your weapons feel important and have a use against specific enemies. Big hulking brutes will go down in a single shot of your hunting rifle while the military foes are best picked off with the assault rifle. Hearing the audio cues from your foes and swapping to the appropriate weapon before entering a room is something I’ll never get enough of and it’s nice that DUSK doesn’t make any weapon too powerful. Even the requisite rocket launcher (the Riveter) is better saved for faster foes than being blasted at will.

There is, of course, a double barrel shotgun that tears enemies apart. It sounds fantastic, has great animation and can really turn the tides of battle when you’re surrounded by enemies. Whipping that bad boy out and going to town on a crowd is always satisfying. If that isn’t to your liking, you could always stick to the double shotgun setup DUSK has. Nothing is more gratifying than twirling shotguns in each hand and watching gibs fly across the screen. 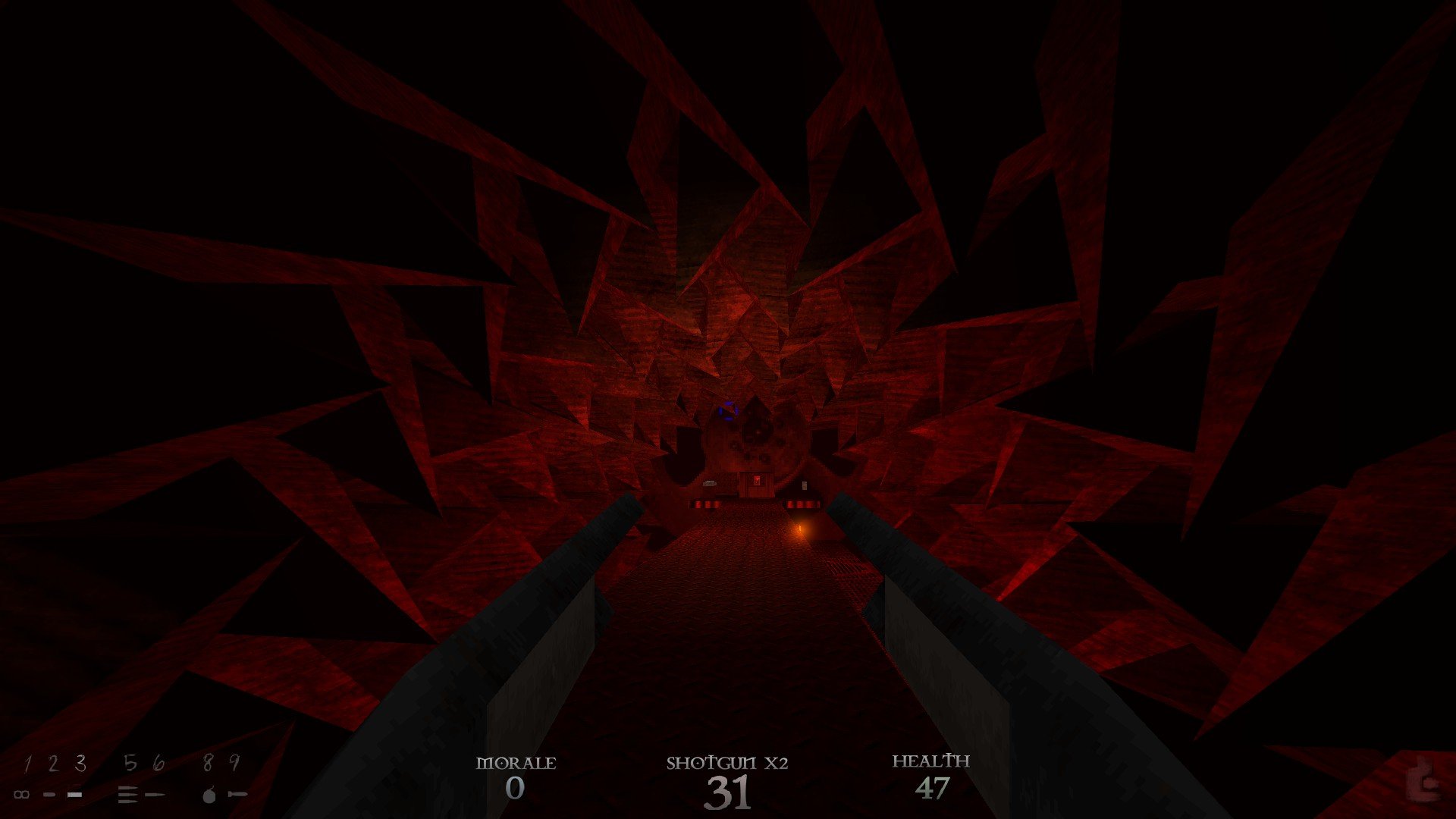 About the only aspect of the game, I’m not too big on are the boss battles. They aren’t bad and don’t disrupt the flow of levels. In fact, you can actually skip almost all of them by flicking some switches and dodging attacks while waiting for doors to open. That choice is very much welcomed because the fights are just super basic. The arsenal in DUSK might be a blast to play with, but a big, hulking bullet sponge of an enemy doesn’t make for the most taxing of encounters.

Thankfully, the final boss is much better and ends the game on a high note. It involves a little more than just unloading your guns and I appreciate that change of pace. It is very reminiscent of Quake, but I won’t spoil anything else. You’ll be pleased when you take him down and see the end credits.

If you couldn’t tell from the screenshots, DUSK employs an old-school blocky graphical style. This looks like the type of games that were being made during the dawn of 3D acceleration and it is charming as hell. Enemies are chunky and move with fewer frames of animation than modern titles, but it all works to complement the specific theming DUSK has going on. This is very much a game in the manner of the past. 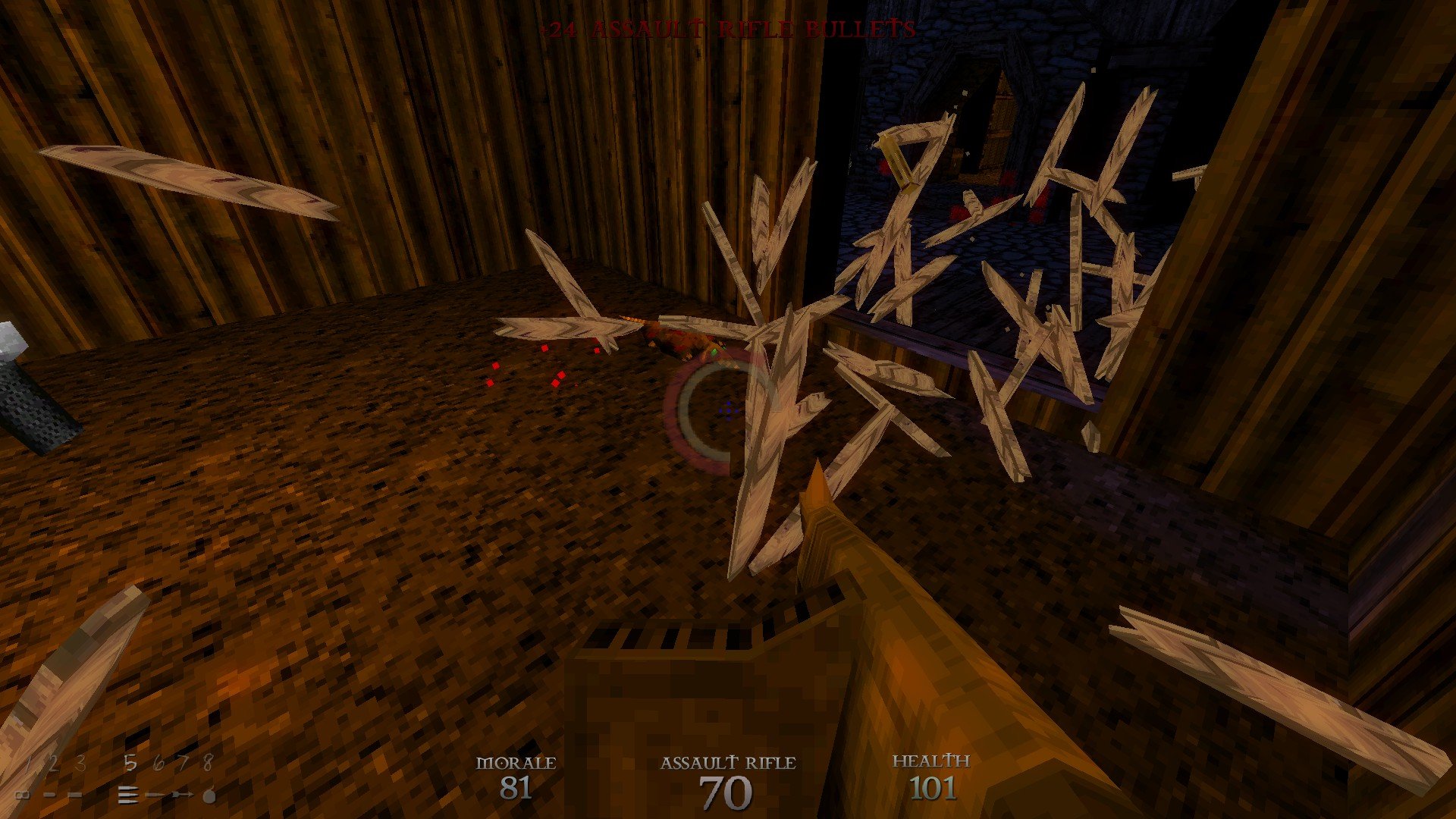 This final build of DUSK brings in more music, more ambient sound effects, and just a general polish to each level of the game. It feels like a more complete product than back in January, even if the basic level design remains untouched. Paths through levels are telegraphed a little better with enemies popping up where you need to go and specific lighting drawing your eye to the path forward. Secrets are a little easier to spot thanks to some new textures for breakable walls.

I was surprised at how much easier it was for me to get through levels in episode one and two than before. That could be because I’ve played them about six times now, but the few moments where I did forget how to move forward were only met with about two minutes to exploration. I was able to decipher what I needed to do and get on my way in a very snappy fashion. It prevents the game from ever feeling boring, which even the best of old-school games can devolve into.

DUSK is all action, no filler and I couldn’t be happier. The game may be taking us back to the past, but it doesn’t ignore the lessons learned about what works in level design. Instead of reusing assets and bloating out the runtime, DUSK is a brisk, four-hour campaign that never hits the same beat twice. It really is just fantastic. 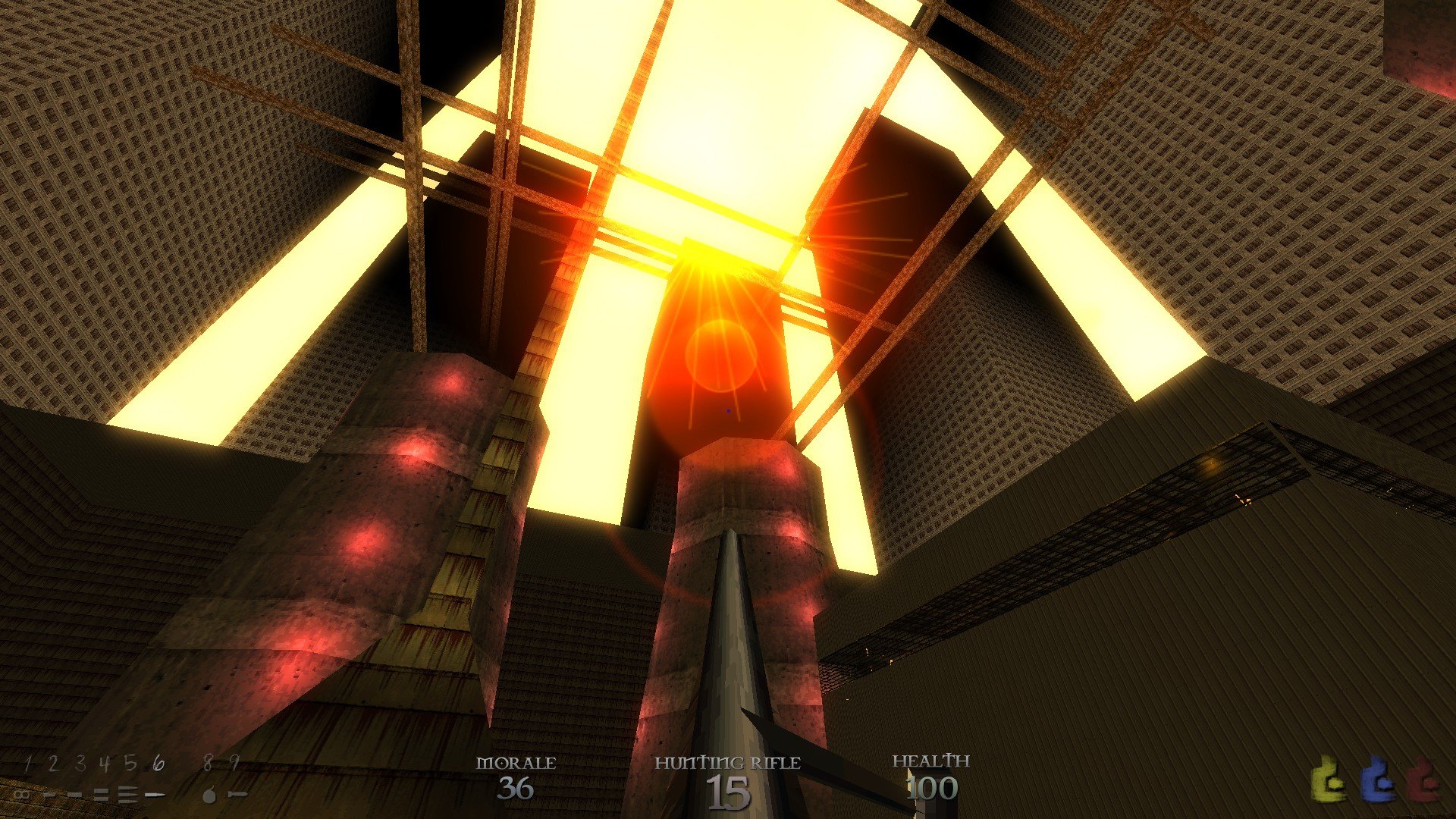 This is even before delving into the multiplayer component, DUSKWorld. In what is perhaps the only disappointing thing about the final release, DUSKWorld is still very limited. Containing only deathmatch and a handful of levels, this mode is mostly a novelty. It is an entertaining as hell novelty, but there isn’t much else you’ll get out of it if you’re looking for a brand new multiplayer fix.

I can’t harp too much on that point as DUSK is priced accordingly and does its campaign brilliantly. It simply would be nice to have some more options when it comes to playing with friends. At least features like cooperative play and mod support are in the works for the future. That could really elevate DUSK into “Greatest of All Time” status because the basic feel is sublime.

That really explains DUSK well. This is shooter perfection and something fans of the classics need to experience. Maybe it doesn’t redefine what is possible with video games, but it beats out basically every other shooter I’ve ever played. I know I’ll be replaying this for years to come and I look forward to seeing what fans are capable of with mod tools.

It feels great to have the golden age of shooters back.