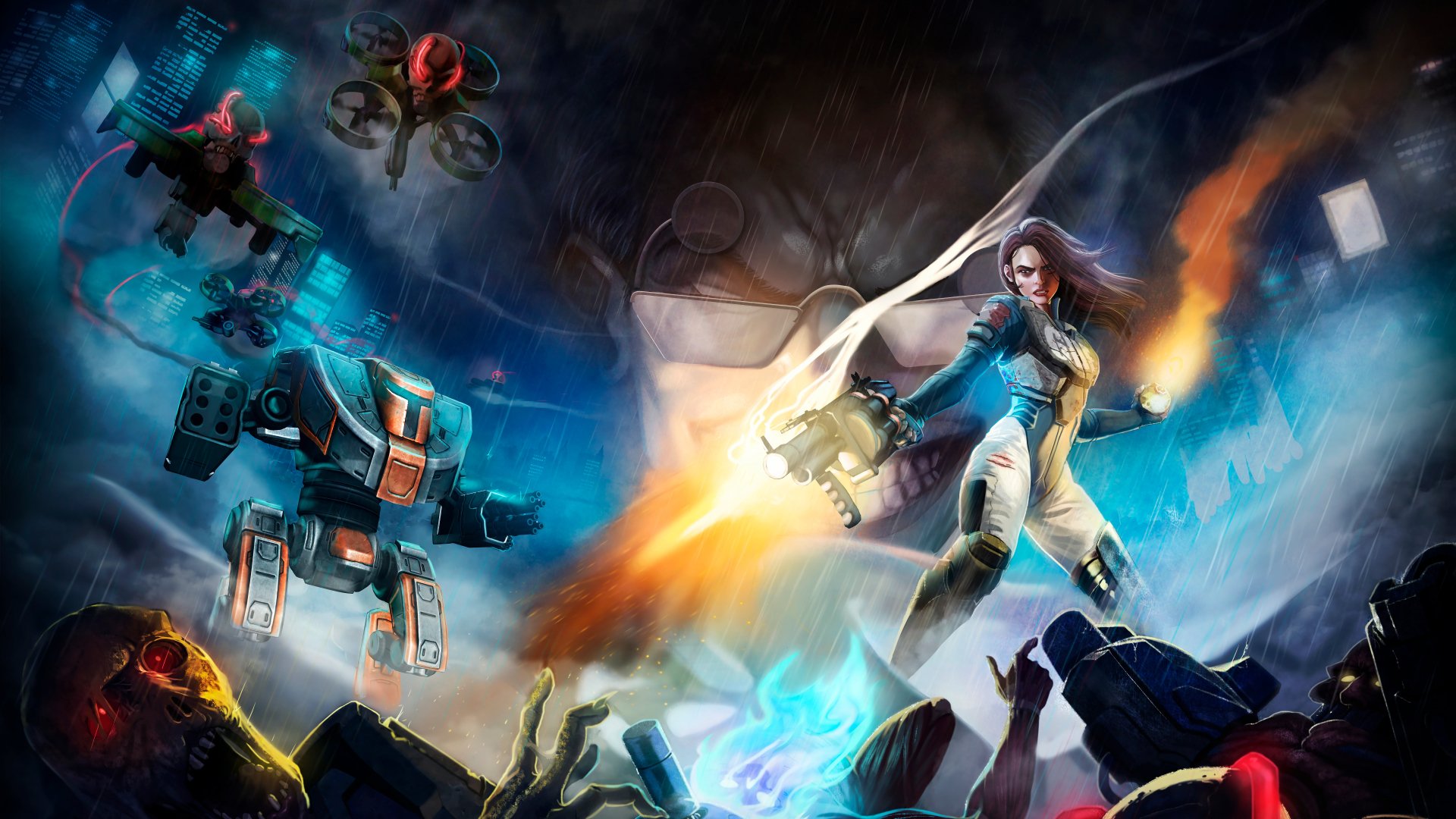 The retro FPS renaissance is in full swing as of late last year. With the release of DUSK, fans of labyrinthine designs and key hunting were treated to an evolution of a classic formula that paid homage to and improved upon its inspirations in nearly every manner. Amid Evil, released earlier this year, did much the same, just with a smattering of some fantastically original ideas to shake things up. It’s been a good time to be a fan of ’90s shooters.

Now, after a year of teasing and hype building, Ion Fury is upon us. Much like those aforementioned shooters, Ion Fury takes us back to the past when shooters weren’t about walking down similar hallways and shooting hit-scanning enemies in samey environments. This is all about exploring lavishly detailed levels, collecting a huge arsenal of larger-than-life weapons, and kicking some ass. The one twist is that this is built on the same technology that powered those ’90s games, lending it another layer of authenticity.

That extra step is appreciated because Ion Fury certainly looks and feels like something that could have released before the turn of the century. 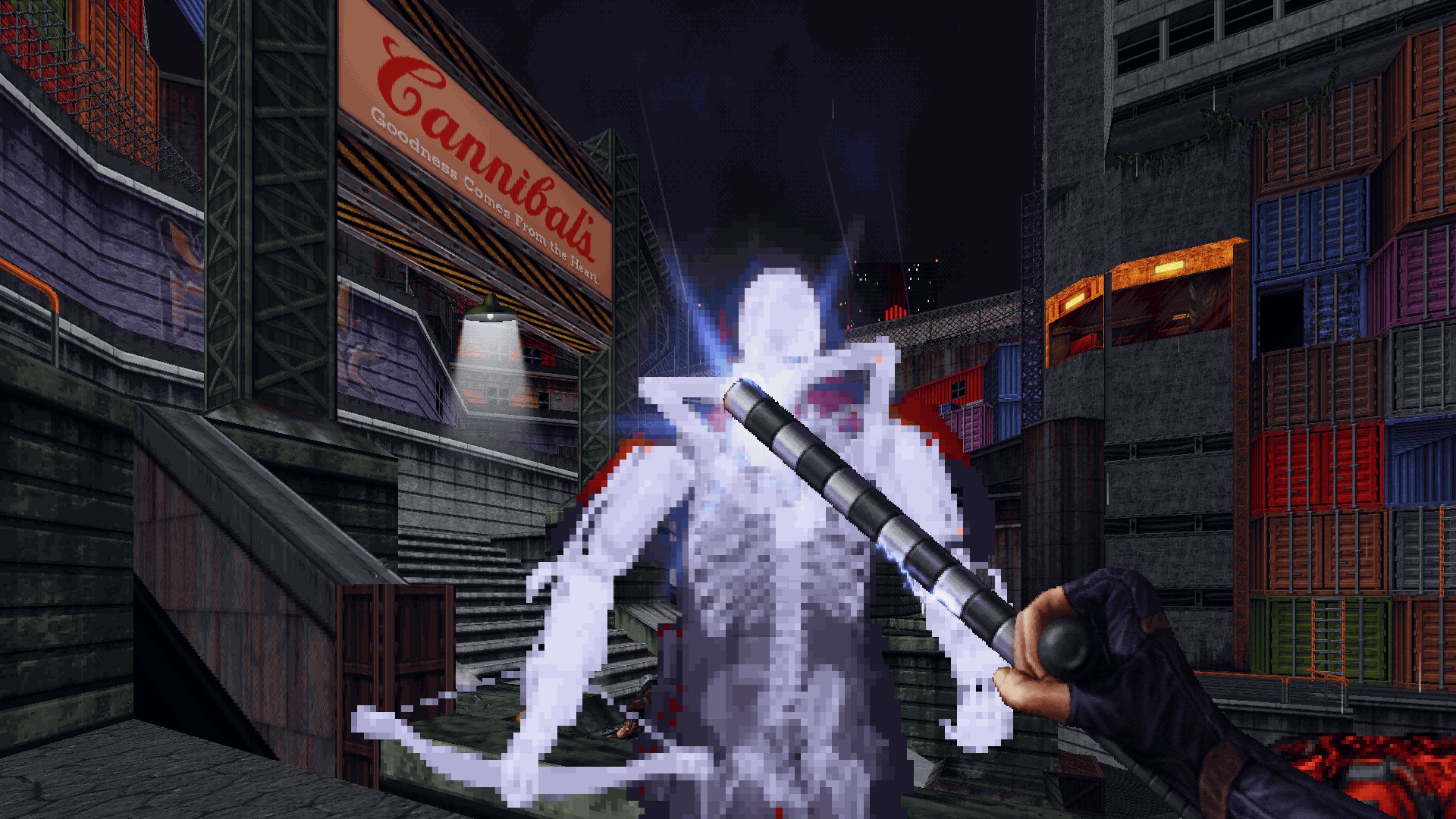 In Ion Fury, players assume the role of Shelly “Bombshell” Harrison, a GDF soldier with a penchant for one-liners and ass-kicking. After being attacked by a group of cybernetically enhanced soldiers created by Dr. Jadus Heskel, a mad scientist hell-bent on raising an army of automatons to do his bidding, she heads back to the GDF headquarters to front an assault on his lab. To get there, she needs to amass an arsenal of incredible weapons, blast the heads off of any piece of scrap that gets in her way, and navigate some ridiculously complex levels. It’s pure ’90s shooting bliss, right down to its minimalist plot and pixelated graphics.

Ion Fury not only recreates the past but does it on the technology of the past. Built using the famous Build engine that powered games such as Duke Nukem 3D and Blood, Ion Fury is every bit as crazy, fast-paced, and gory as its inspirations. In fact, it plays like the best version of its inspirations, using design philosophies of the modern era to push its ancient engine well beyond what was possible 20 years ago.

So you won’t find obtuse switches that open doors 50 miles away or keys hidden behind fiendishly placed deathtraps. Ion Fury certainly doesn’t shy away from challenging the player, but the level design feels more realistically laid out than even the best levels of the past. Coupled with the attention to detail that developer Voidpoint has given to each environment, Ion Fury comes off like an actual location you could visit. City streets are dirty, full of set dressing, and littered with stupid little interactive objects for you to toy with. It’s staggering how far the Build engine is being pushed here.

It’s also incredible how far Voidpoint has upgraded the engine to feel modern. In most classic games, locational damage was not possible. You could shoot enemies wherever you felt and the damage dealt was based on numerical values instead of accounting for individual body parts. Ion Fury adapts what’s become standard and includes things like headshots and different values for shooting enemies in the feet, which lends a lot more skill to the proceedings. Now you can fly into rooms jam-packed with foes and fire off single shots into their brains to end them.

You’re going to need to get good at that, too, because Ion Fury is a fairly challenging shooter. While the beginning might be a little tougher than the rest of the game, that mostly comes down to being unfamiliar with the various enemies that populate this crazy version of future Washington D.C. Once you get into the swing of things, you’ll start to prioritize who needs to go down first and how to move about a room.

Much like classic Doom‘s iconic and celebrated cast of baddies, Ion Fury has a very distinct roster of foes you’ll be ripping into throughout its roughly nine-hour campaign. You’ll start off with simple yellow-hooded foes with revolvers before working your way up to massive battle mechs that lob grenades and have chainguns. Each one is easy to identify at a range because of their unique sprites and animations, and more importantly, none of them act like the jackasses that populated previous Build engine titles. When you enter a room, you may not hear clear audible indications for what enemy is there, but you will notice guns cocking and rounds being loaded, giving you time to find cover or survey the area before attacking. 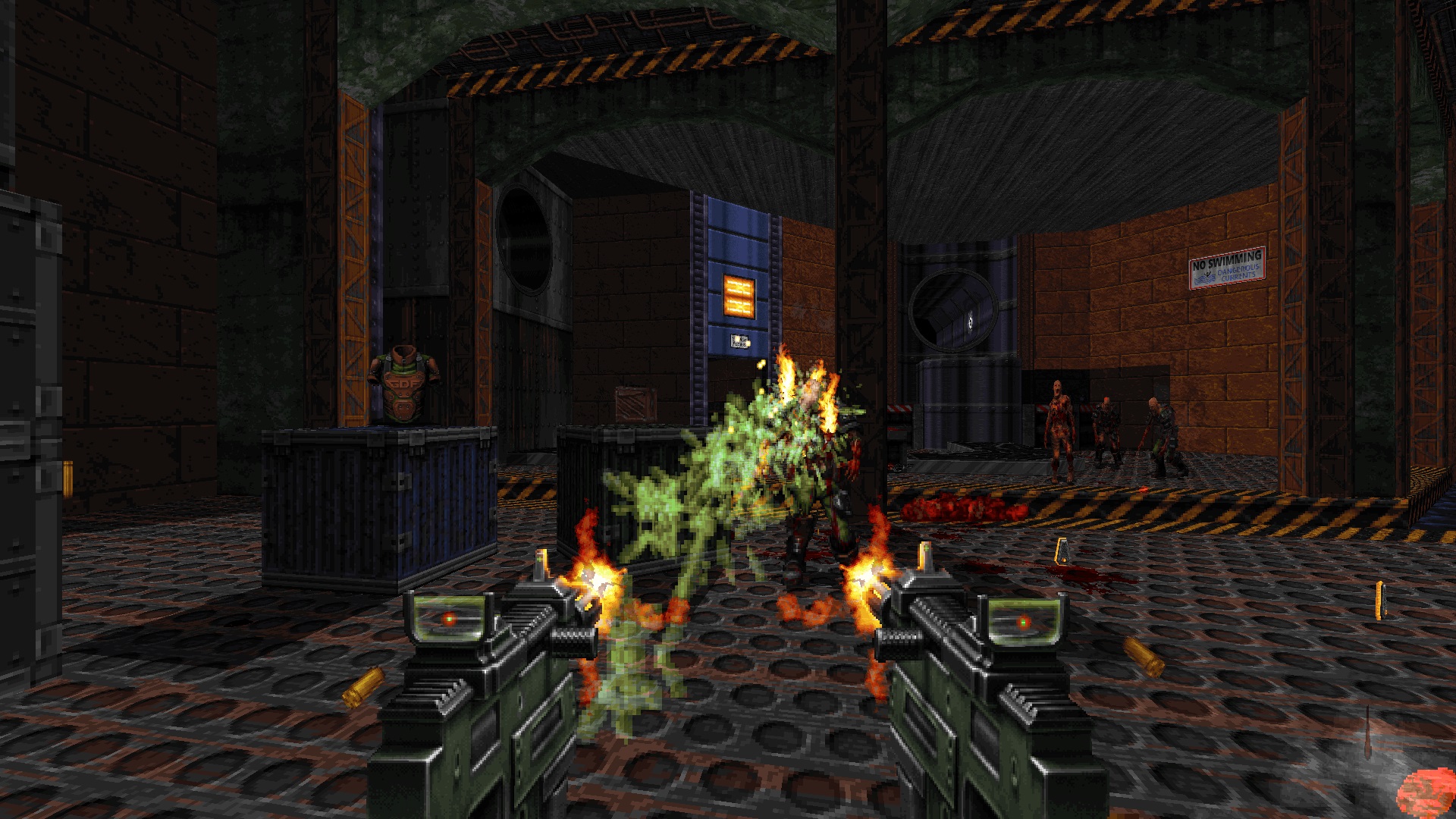 There’s a certain rush to opening a door, seeing the dreaded red coat android and a plethora of those dastardly spider bots, quickly running behind a desk or table, then hearing enemy gunfire whizz by your head as it barely misses you. This is a lightning-fast FPS game that accurately captures the sensation of arena shooters of old, requiring you to memorize enemy patterns and learn when to utilize specific weapons to better take them down.

It wouldn’t be fun if the arsenal was a dud, but basically, every weapon in Ion Fury is excellent. From the seriously powerful starting revolver, the ridiculous shotgun/grenade launcher combo, to the heat-seeking bowling bombs, you can find a use for pretty much every weapon at your disposal. More so than classic games, figuring out which gun deals with certain foes best is key to maintaining your stock of ammo, which is scarce in the opening levels. While you could pump 100 chaingun rounds into larger foes, lobbing five grenades would be more efficient.

I really want to talk about Shelly’s revolver, the Loverboy, some more. What happens in almost every old-school shooter (and even modern ones) is that your starting weapon is just that: the weapon you start with. Once you find anything else, you basically have no need to return to the pistol unless you run out of ammo. In Ion Fury, most of the weapons have secondary fire modes to mix things up. For the Loverboy, it gets a feature similar to Red Dead Redemption’s “Dead-Eye” in that it will mark enemies for Shelly to automatically shoot at once you let go. It’s a godsend for taking out foes at a distant and the occasional flying bastards that can incessantly tick away at your health from above. In many cases, I’d enter a room, whip out the revolver, and clear out the distant enemies before taking to the closer ones. 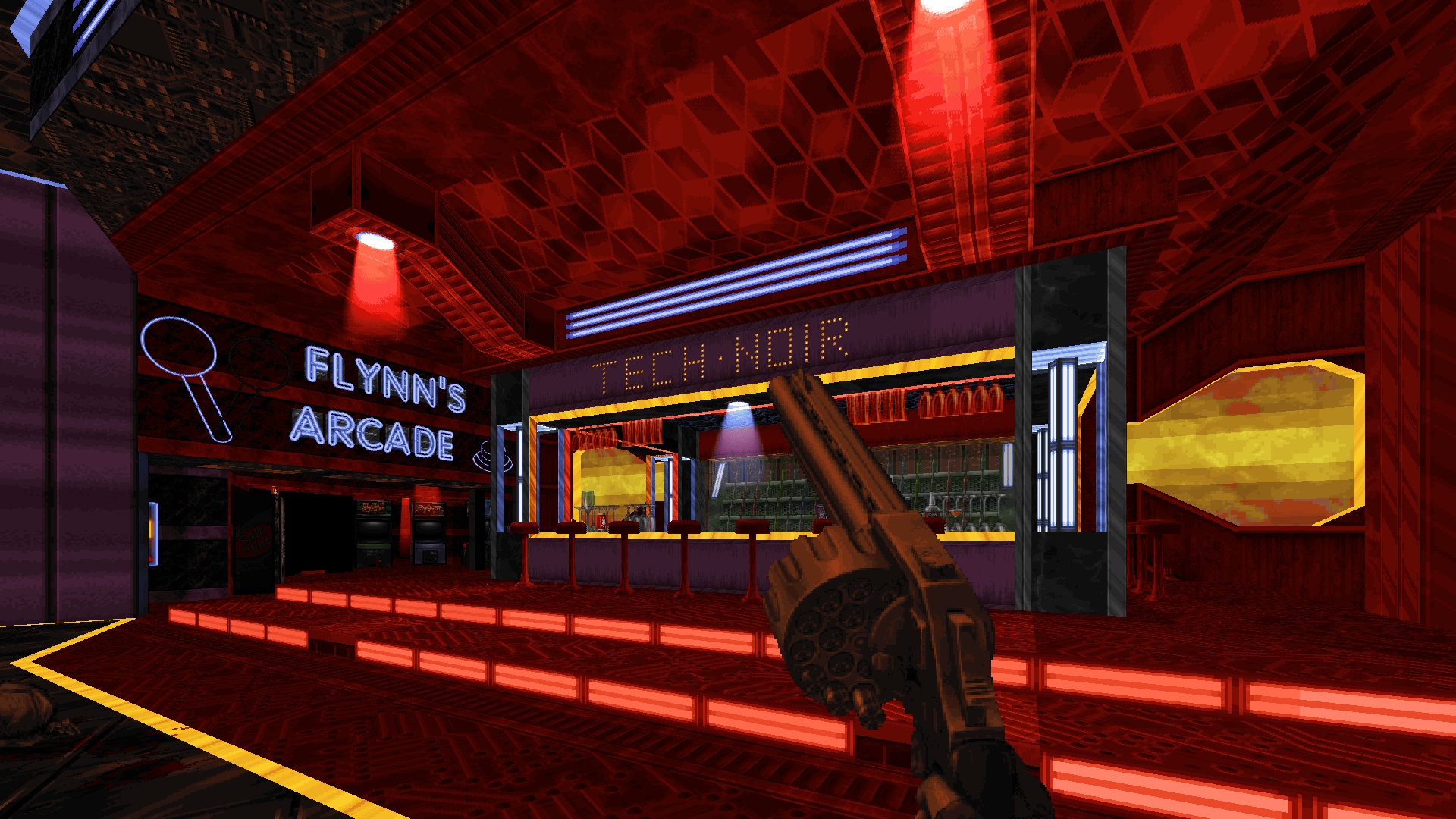 Discovering all of these unique quirks is part of the charm of Ion Fury. It’s just plain fun to play but is also smartly designed to encourage you to tinker with its different systems. About the only part where the game falters is in its pacing. While I’ll never knock a developer for wanting to include as much game as possible, Ion Fury definitely goes on for an hour or two longer than it needs to.

While each location has at least one incredible shootout for you to tango with, the game stops introducing different enemies beyond the second hour. Different bosses come up and do get thrown back into the mix as lesser versions of themselves, but it happens so sporadically that all of the freshness of learning these foes, your weapons, and the flow of each arena kind of loses its luster.

The best comparison I can make is to this year’s standout blockbuster John Wick: Chapter 3. While an excellent movie, the action keeps ramping up so much that you almost get bored by the midpoint. John has encountered and defeated so many foes of greater strength in such clever ways that it just becomes too normalized. Ion Fury feels a bit like that, containing action that would make other games blush, but is just par for the course within itself. 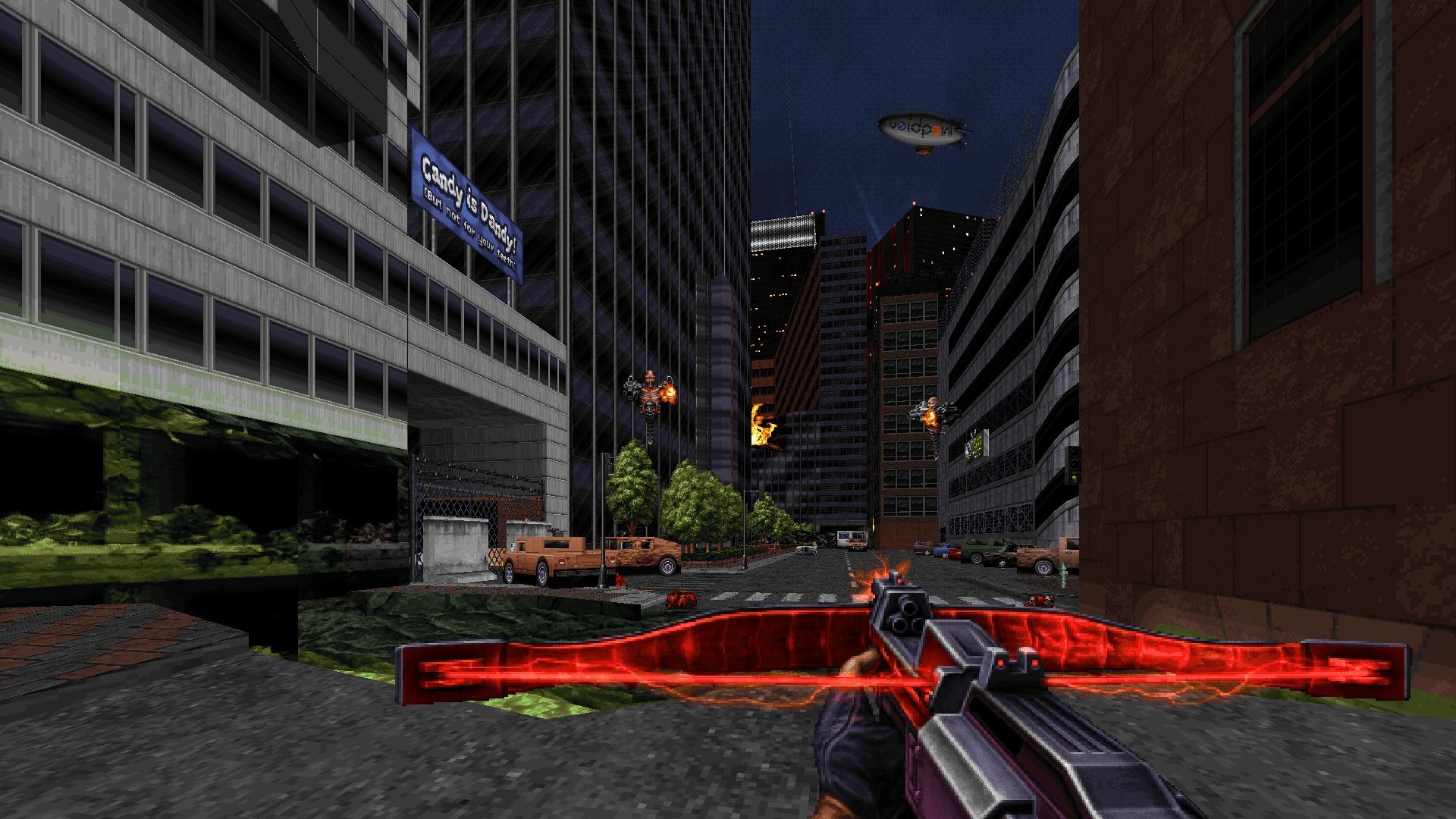 The structure is more akin to Quake II than Duke Nukem 3D, so I think that might be partly why I feel this way. Instead of containing episodes with visually distinct levels, you’re constantly progressing forward towards an end goal while building up your arsenal. By the time you’re at the middle of the game, you have every gun and so much ammo that the difficulty stops mattering. Even when harder foes come in, you’ll have more than enough grenades to rip them apart without a second thought.

There are also a few segments where the design feels a little too old-school. You’ll throw a switch that opens an elevator to proceed into the sewers, but the elevator isn’t clearly marked for you. I spent an embarrassing amount of time going back through the level to find what I had missed, though it did at least allow me to discover quite a few of the secrets scattered about. Finding those secrets early on can really tip the odds in your favor, which is exactly what old-school shooters did so well.

God, I’ve rambled about how great this game is without even mentioning the main protagonist once. In the PAX demo from 2018, Shelly sort of felt like an afterthought. It was definitely early in development, but my hope was that Voidpoint would give her more to do and say, much like how most people remember Duke Nukem. That’s certainly been accomplished here, with actress Valerie Arem providing a bunch of cheesy one-liners and vulgar language to spruce up the action. It’s all of the best parts of Duke without any of the outdated writing. Arem is clearly having a blast, which makes Shelly feel more realized than her predecessors.

I could keep going on and on, but I’ll make it simple. Ion Fury not only recaptures what made retro shooters so memorable, but it improves on them in a number of ways. While not as excellent as some other recent entries in the same genre, this is a game that fans of the past should not miss. It’s brutal, lightning-fast, and always putting fun before anything else. Some nips and tucks here with a few more enemies there and we could have a real contender for “Queen of FPSes.”