But what does it have up its sleeve?

I recently had to describe the concept of Pony Island to someone. What I ended up with is, “It’s a game about being in a toxic friendship with Satan.” It was an experimental title in terms of narrative, taking place mainly on a single screen and layering on the deception. As you peel it all back, things start to make sense, and that creates a strong feeling of satisfaction as all the pieces start slotting together.

So, I guess I can’t blame developer Daniel Mullens for sticking to that. Inscryption is that. You’re presented with a situation that is simple to understand, but you can instantly tell that there are insects under the surface, and if you just take hold of the dog-eared corner and pull, you’ll be treated to a new perspective. 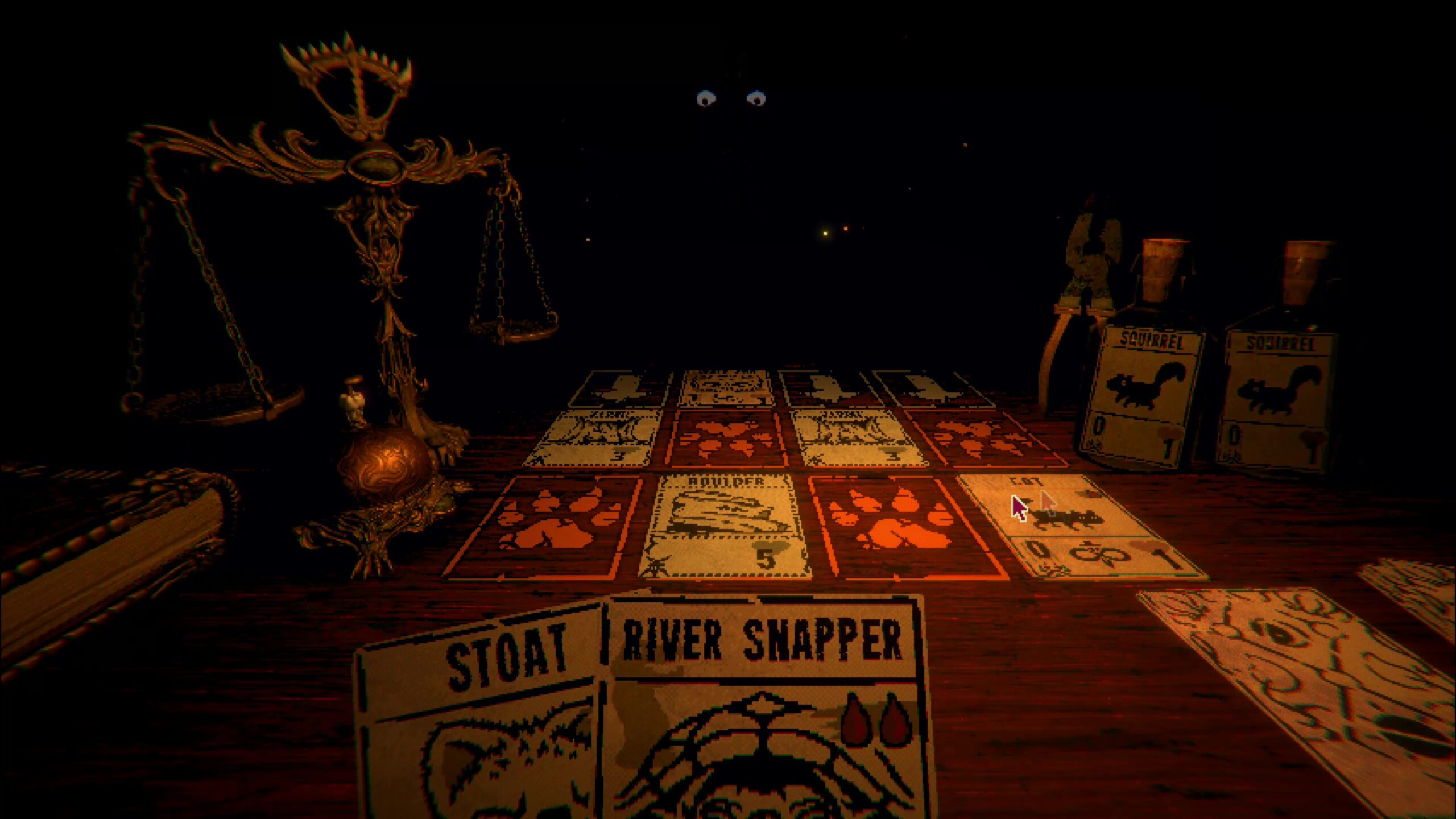 You find yourself locked in a cabin with a shadowy gentleman. Like a relationship-starved tabletop gamer, he immediately forces you to join him in a competitive card game. The clinch is that when you lose, you die.

Inscryption, at least from the outset, is sort of a cross between a CCG, a deckbuilding game, and a tabletop RPG. You progress from encounter to encounter along a map, collecting cards, and defeating bosses played by the game master. There’s clever roguelite progression that comes from exploring the cabin and solving puzzles. Doing so gives you access to more cards and carvings that allow you to creep further and further along the map.

Honestly, I think the atmosphere and gameplay could have carried the whole game. Developing strategies to overcome the random nature of the game was satisfying, and I didn’t feel like I was a lame duck just because the game was handing me everything I didn’t want. My most powerful hand backfired on me, and when I finally finished toppled the boss, it was with a pretty below-average deck made up for by my highly developed gamer brain.

I don’t know how far it’s appropriate to describe the game. The marketing material only shows the first part of the Inscryption with brief hints that there’s anything beyond that, but I can’t just pretend that’s all there is. It almost feels like too much to tell you that it’s wearing a skirt and that you’re going to look up it. Should I tell you what you’re going to see? No. I guess I’ll just let you know if you’re going to enjoy the sight.

Yeah. Probably. Mostly. I’m going to be honest, the first phase of the game was my favorite, but it’s not like it all gets dumped in favor of a completely different experience. The core game stays the same, but there are four layered alterations to it that change things significantly. As Inscrpytion progresses, its flavor changes. The atmosphere changes. The graphics change. It’s just enough to throw you off, but not so much that you have to start from scratch. 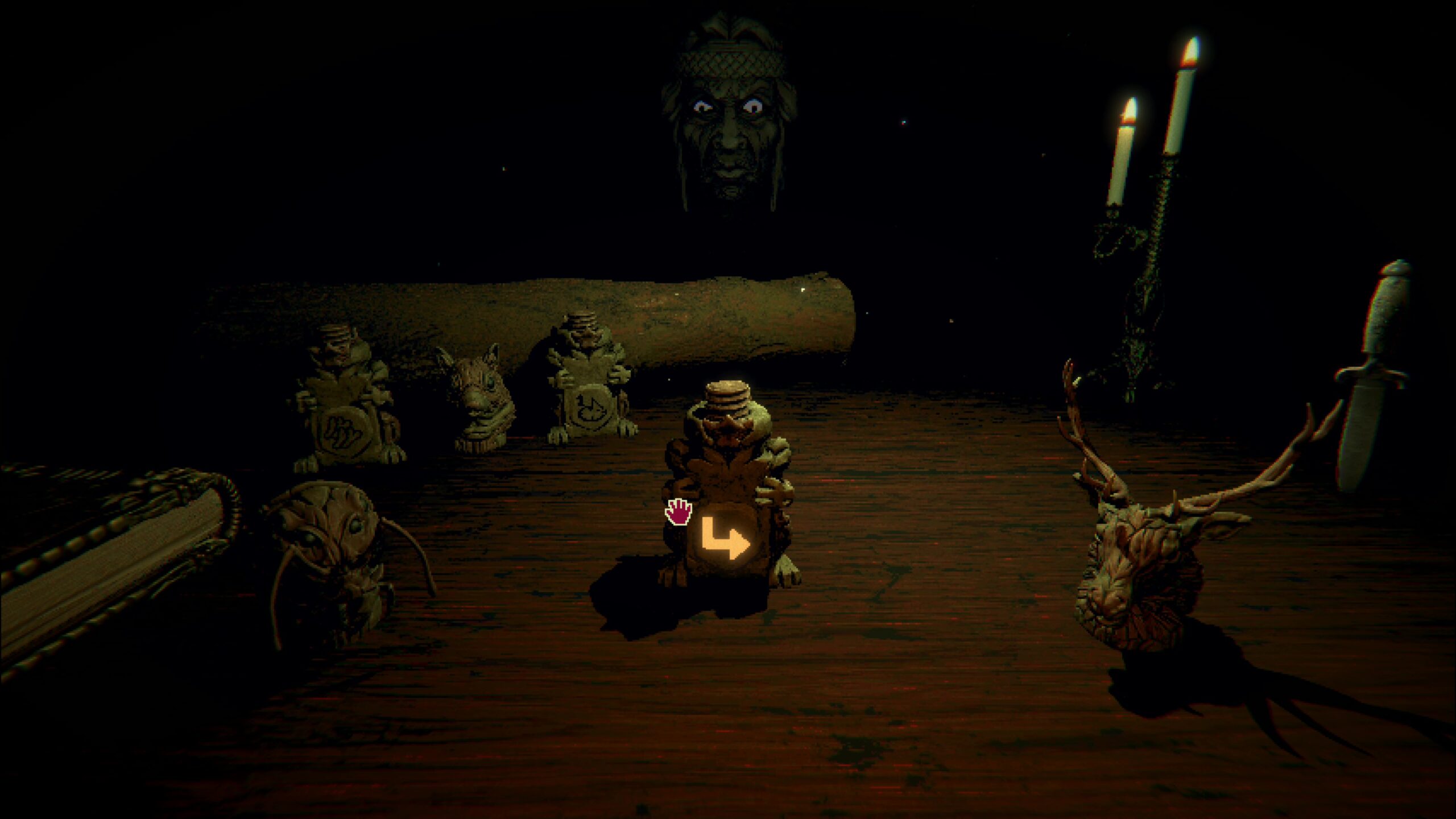 If you picked up a bit of cynicism from me when it comes to the plot, it’s just because I feel there needs to be more than misdirection to tell an interesting story. Does Inscryption manage to present something behind its trickery? It’s decent, yeah.

While the progression is kept mystifying and cryptic, when it gets down to it, it presents a decent tale about a power struggle between four bored creators. You find yourself dropped into the middle of it, swept along by the undercurrents. Technically, you play as a named character who is trying to unravel this mystery, which is probably the weakest part of the narrative, but easily ignored.

It has its share of trite story mechanics. It’s built on the whole “haunted game” idea. Try to act surprised when it pulls from your Steam friends list or asks you to select a file from your hard drive. Again with the cynicism, but it’s honestly entertaining, even if it feels so completely on-script for it to go off-script like that. Inscryption’s trickery works well as a mechanic, so even if you’ve seen this sort of thing before, it’s not entirely unwelcome. 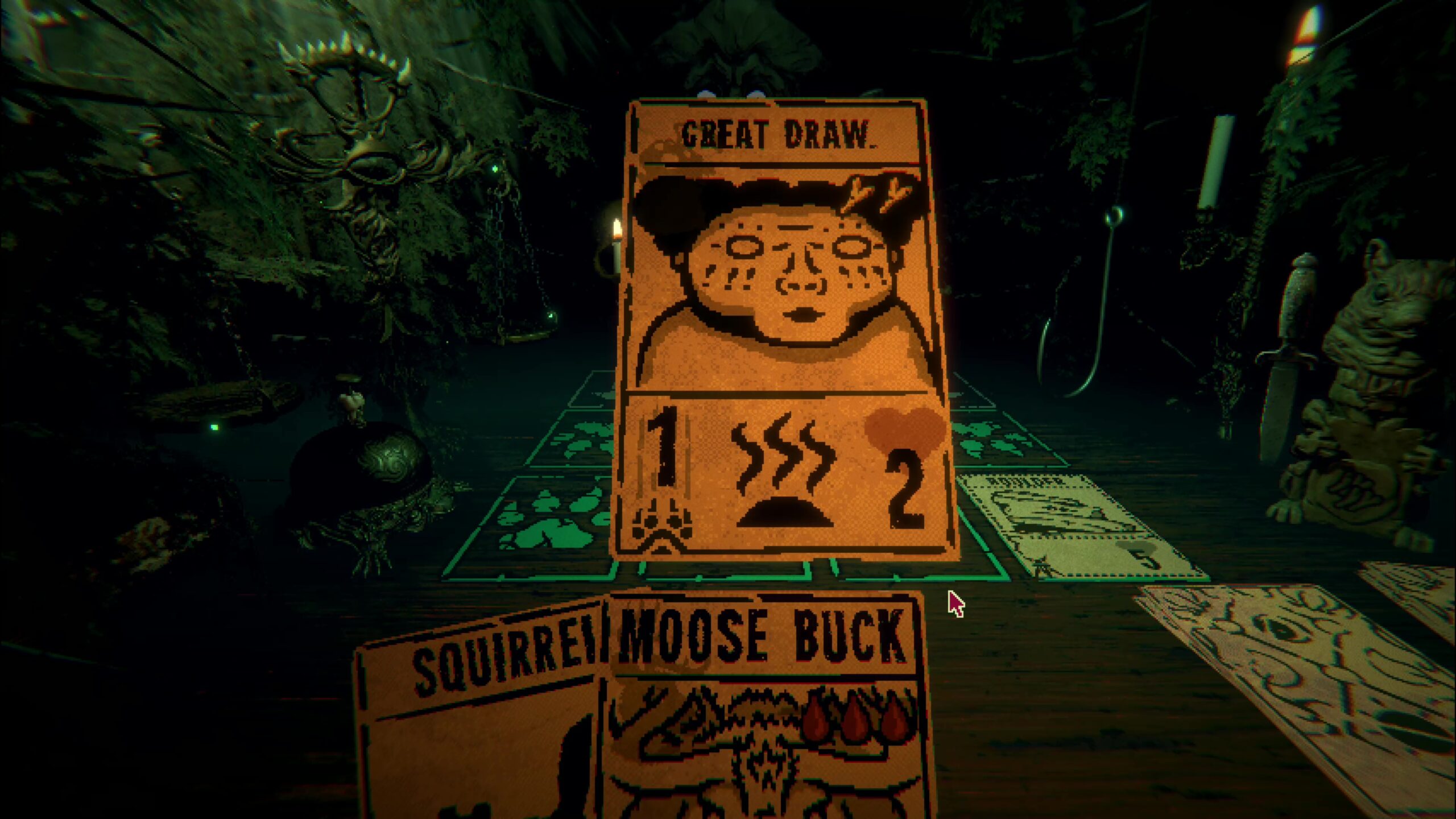 Truly, the best parts of Inscryption are when you’re left to probe the margins. Whenever you’re given the option to get up and look around, there are lots of fun puzzles to pluck away at, many of which rewards you with some extremely helpful cards and tools. You can also pick up some of the game’s backstory if you scour enough. There’s just something satisfying about wandering a darkened cabin, solving escape room puzzles.

Don’t get me wrong, however, the only way to progress is to win at cards. All the puzzle solving is just there to help you beef up your deck. Also to add atmosphere. Maybe to creep you out a bit.

Speaking of creepy, the graphics are masterful. The ever-present use of darkness and pixel filter work well for the 3D sections. The low fidelity adds a creepiness value to the already muddy visuals. It does a great job of framing everything and ensuring you can only see what you’re supposed to. It can sometimes feel like pixel hunting as you search the gloom for something clickable, but it reasonably communicates the important stuff. 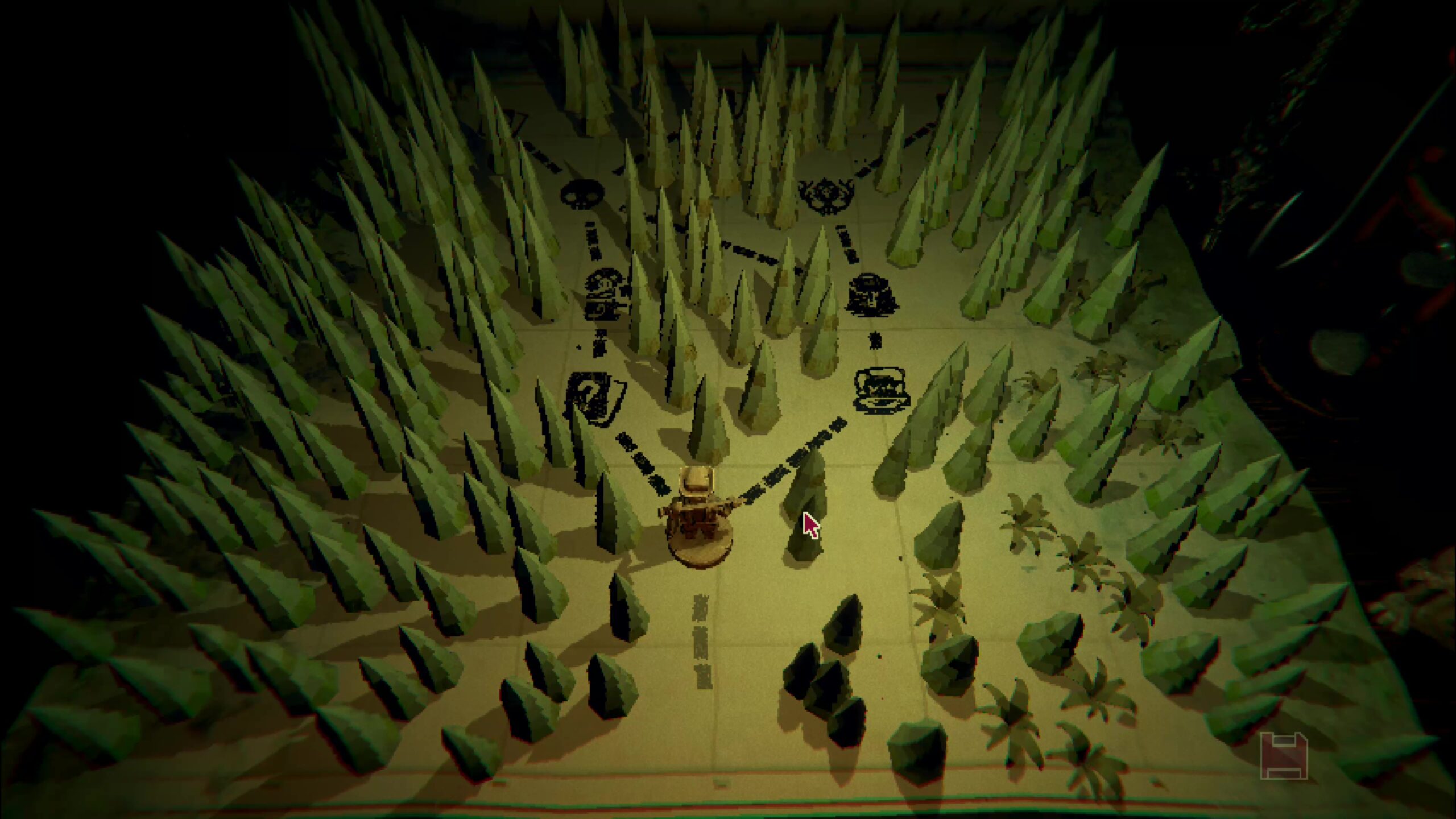 My prediction is that Inscryption will be somewhat divisive. I can see a lot of people getting annoyed when, after their bath finally gets to a comfortable temperature, a bucket of ice gets dumped into the water.

That’s how it was for me. I was deeply absorbed until the game flipped for the first time, then I fell out of love. I reconciled before the end, but I was still left feeling like I played a few similar games of different quality. Maybe it was a good idea to change things up before it had the chance to grow stale, it’s just nothing gripped me as firmly as the first chapter.

With that said, I did enjoy Inscryption. Part of me is tempted to dive back in to see if I can scrape any more secrets out of its cracks. Really, that’s where it excels: not the misdirection, but the hidden crawlspaces where it hides all the bodies. At its best, it feels like you’re actually uncovering a deeper plot. At its worst, it feels like you’re watching a magician pull handkerchiefs out of their sleeve. It’s cool, I guess, but you know they’re just screwing with you.