It’s not even October yet, and I’m already looking for excuses to squeeze more horror movies and games into my life. So even though I was a bit unsure of In Sound Mind, a small-team first-person psychological horror adventure, I was eager to go for it.

It’s not what I was expecting based on the kinds of games we’ve gotten from this genre in the last decade. Admittedly, across the board, there have been diminishing returns. And on the surface, it seems like In Sound Mind might run the risk of being too samey, but it actually goes to some wild and original places over its 10- to 12-hour runtime.

There are sneaky mannequin shenanigans, specters who stalk you while you’re scrounging for puzzle solutions and hidden items, and lots of random phone calls that you can freely hang up on. No, really, it’s kind of hilarious — there’s this deep-voiced entity who hounds you the entire game and constantly rings you up just to talk trash and get a rise out of the protagonist. It’s a wonderfully cheesy touch, and I never got sick of it. 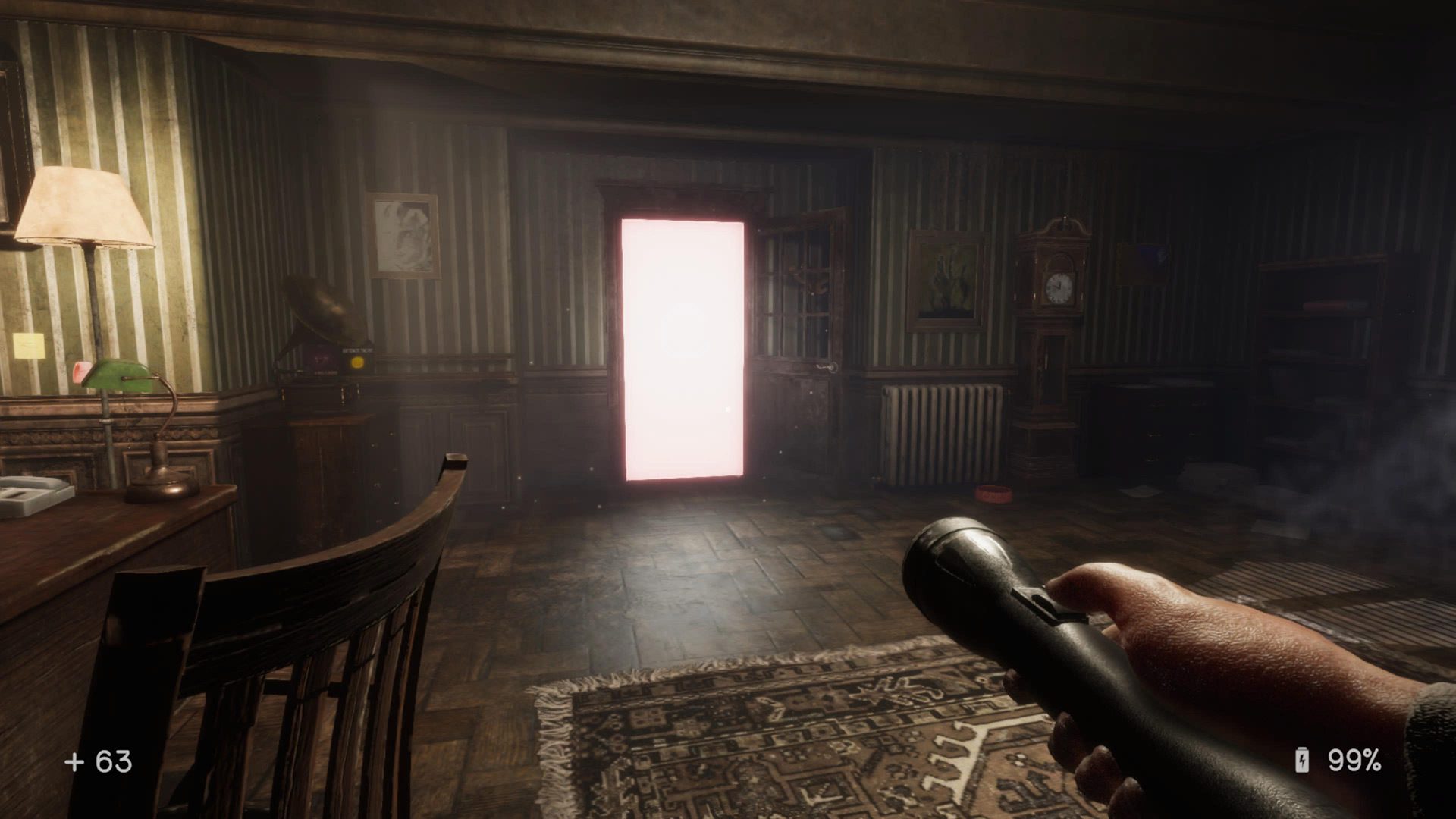 The longer In Sound Mind goes, the less spooky it becomes — but the first couple hours are creepy. Ordinarily, I’d call that a bad thing for a psychological horror game, and for you, it might be a real drawback. But in this case, it feels more intentional, due to the story.

To give you an idea of the early scare tactics, there are a handful of maybe imagined, maybe real glimpses of something moving past your periphery. The first time I saw (and then ran from) the inkblot creatures — the only “common” enemy in the game — I was on edge. One early area, a sprawled-out grocery store, is dark, confusing, and there’s a ghost chasing you that can only be temporarily warded off with its own reflection.

So, yes. In Sound Mind has some of the elements we’ve come to expect from these indie and mid-tier horror games. Initially, at least! As you fall into the routine of this game, the mood settles in, and a new larger-than-life conspiracy emerges, which takes center stage. In some ways, it’s part Layers of Fear, part Alan Wake. In others, it’s totally its own thing.

By the end, tonally, it goes a bit goofy. There’s a talking cat. Y’know, I’m okay with it. 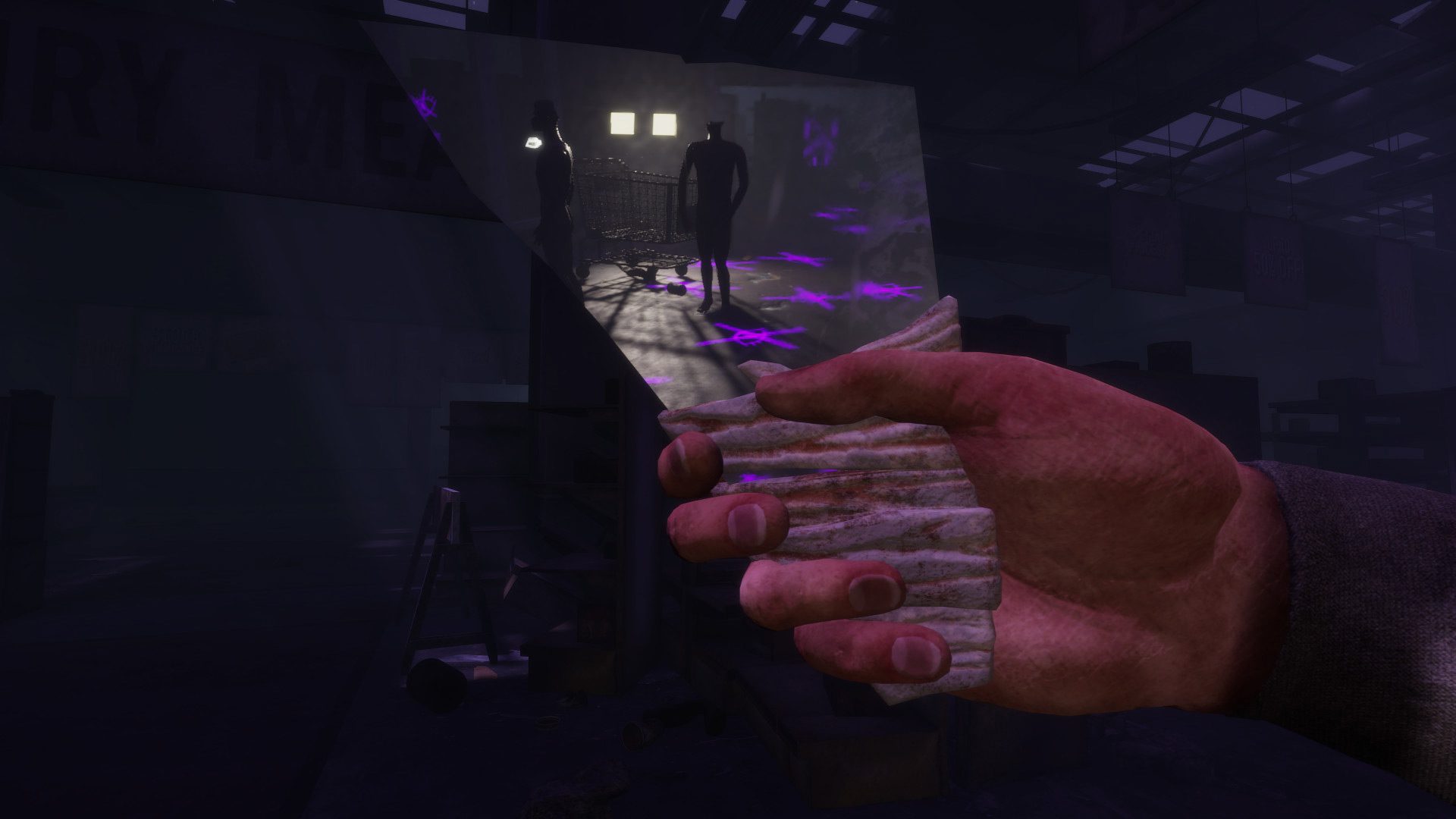 My favorite part of In Sound Mind is the way it’s laid out, though it does eventually start to wear thin. Playing as a therapist with an unknown past, who’s stuck in a sort of dreamlike or hallucinatory version of reality, you’ll poke around an abandoned apartment building — your apartment building. The place has really gone downhill, and weird stuff is afoot, which is a great jumping-off point for a very exploration and puzzle-centric adventure.

Over the course of In Sound Mind, you’ll find cassette tapes from therapy sessions that will lead you — teleport you, really — to four main self-contained twisted dreamscapes.

These four disparate locations all have a unique, recurring threat that will make things tricky for you as you scrounge for puzzle items, ammo, HP-restoring food, and secret pills that offer permanent buffs to your health and stamina, among other stats. Every zone is its own sprawling sandbox, which can be fantastic for puzzle-lovers who want a lot of freedom to explore and not-so-fantastic when you’re stumped on where to go next or how to get past a certain obstacle. I got completely, annoyingly lost for half an hour, twice.

There’s the mart, as described above, as well as a shoreline with an all-seeing lighthouse, a quarry with a hush-hush factory, and a forest with a heavily fortified bunker. I spent two to three hours in each of these places, to say nothing of the three-story apartment building hub, which can be peeled back a little bit more every time you return with a new weapon or tool. Your main items are a flashlight (which runs on finite batteries), a shard of glass (that can slice and reveal hidden kinda-mystical clues in its reflection), a handgun (for the inkblot creatures), a gas mask (for fumes), and several others I won’t spoil.

I will say, the “looking at the objects in a reflection” mechanic can be unwieldy, although it’s not as bad as you might fear. I didn’t hate it, and I appreciate that hidden sights linger for a while after they’re revealed. That helps cut down on the clunkiness somewhat. 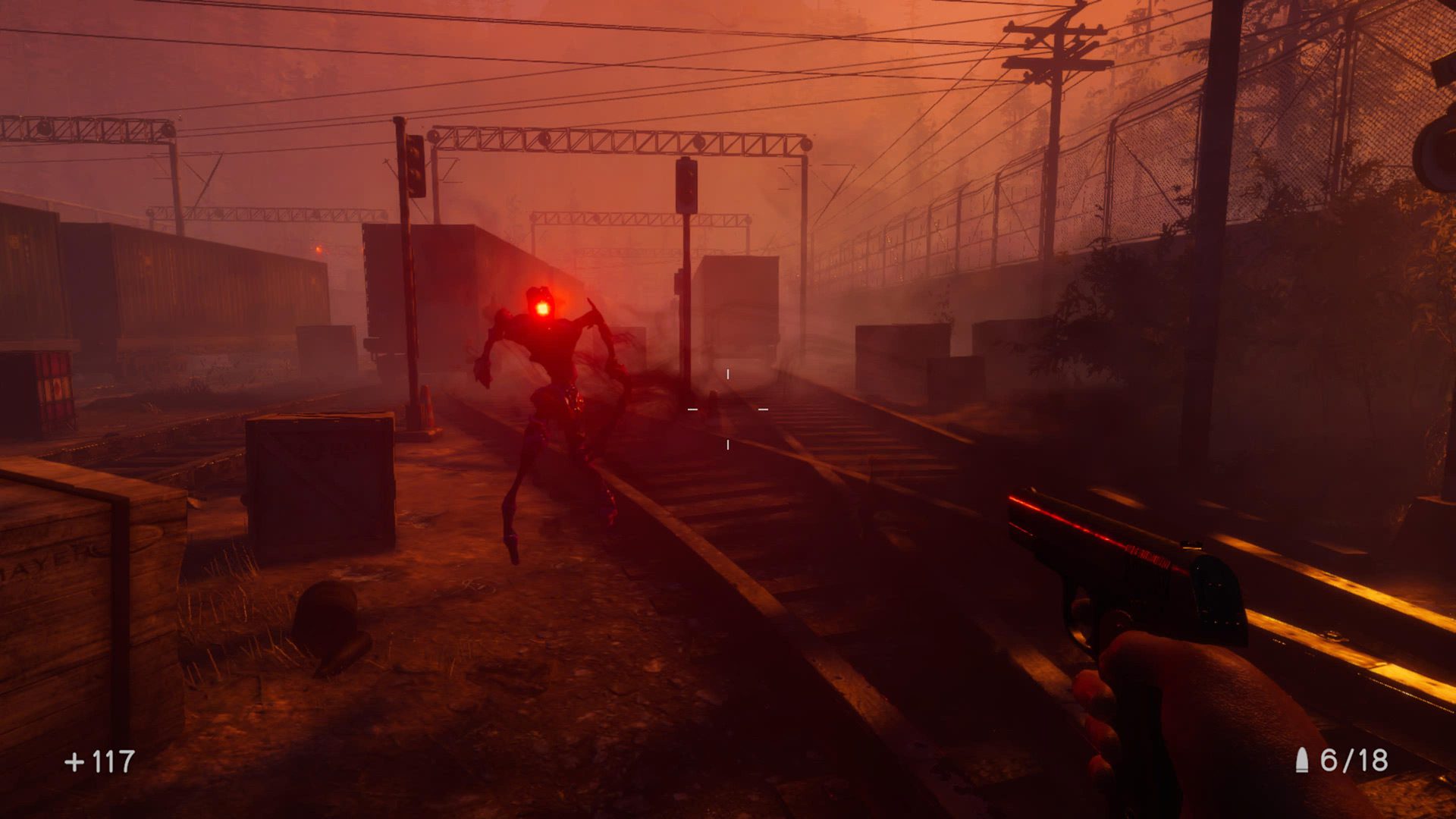 Honestly, In Sound Mind can be a tough game to describe without oversharing.

The puzzles mostly do a good job of making sure you don’t go too terribly far in the wrong direction before you’re meant to, in an effort to avoid wasting your time; the super-fast sprint help. The major theme is what I’d call “environmental observation.” It’s less about cryptic brain teasers or complex logic puzzles, and more about thinking through your surroundings, looking for nooks and crannies, and trying to figure out the right order of events. This game doesn’t hold your hand, and it’s possible, in a couple of notable instances, to accidentally leave a key item behind without realizing what you’ve done.

The other big point I want to get across is that combat isn’t the focus, and it’s often just as easy to run from the foes. They’re one of the weaker elements, easily. They lack presence.

On a similar front, the recurring stalker threats in each world aren’t, like, Nemesis or anything. You won’t dread them. I’m being cagey here since they’re all story-related, with ties to the protagonist, and the surprise of seeing how they look, and act, and how you deal with them is a pretty neat part of the game. The important thing to note is that they’re generally not outright annoying, and if they are, it’s usually a short-lived sequence. Soon enough, you can get back to first-person-adventuring your way around, undisturbed. 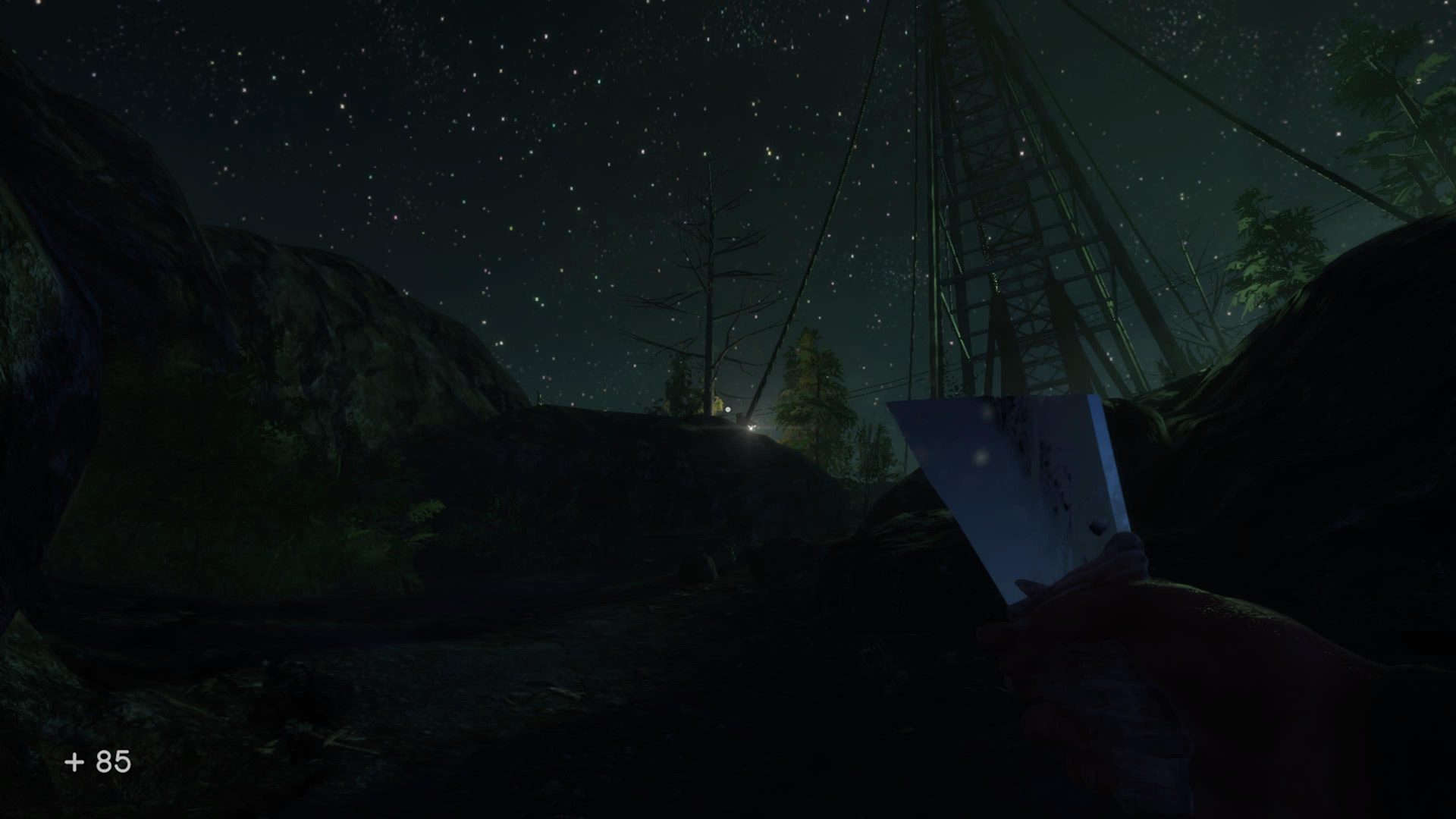 The best way to play In Sound Mind would be to break it up into at least four or five decently long sessions, as the different acts have self-contained gameplay loops and natural, satisfying story arcs. You may, occasionally, need to bust out a video guide. I can think of one moment in particular — a conveyor belt nightmare — that was too annoying, and even too glitchy, to warrant putting up with across multiple failed attempts.

I’m not sure if the PC version will fare any better, but the PS5 edition was really messy on a technical front. Not to the point where I’d say to avoid it — it’s all “playable” — but lower your expectations, for sure. The frame rate is frankly all over the place, to a degree that I would’ve expected more from a potential PS4 version. (Note: there aren’t PS4 or Xbox One versions of this game.) This isn’t a great-looking game by any means, so that performance is disappointing. Worse yet, I had several crashes, all related to a particular foe. I feel like this will be fixable, and I lost very little progress, but it’s another blemish.

Technical issues aside, the scope and length of In Sound Mind are about where I’d like them to be. One of the four main areas, the quarry, really overstayed its welcome — it felt like a chore in some moments. The rest? No big complaints. I liked the beginning the best, because I enjoyed being creeped out in a too-quiet apartment building and a paranoia-inducing grocery store, but I also enjoyed the not-even-remotely-unsettling later portions when the shifting story led the vibe from psychological horror into conspiratorial mystery.

Despite some disappointing and frustrating moments, there’s enough compelling stuff that I can still recommend In Sound Mind to fans of adventure-leaning indie horror games. Overall, I dug this team’s ambition, and I was excited to see where it was headed. I just wish the game ran better and streamlined some of its level and puzzle design.