Square Enix has put itself in a rather interesting predicament. Given that the company is over 40 years old at this point (if you count Enix), it has a rather sizable fan base that’s comprised of people of all age groups.

On one hand you have the hardcore fans who want nothing more than JRPGs. On the other, there’s folks who wouldn’t be caught dead playing one, and want the publisher to branch into newer, fresher projects like shooters. The company is constantly at odds with itself, trying to bend over backwards creating projects that will please both groups, like the highly anticipated Final Fantasy XV that may or may not make back its absurd development cost.

But there’s one recent exception that goes completely the other way. I Am Setsuna is a clear callback to the SNES era, and makes no attempt to be anything else. 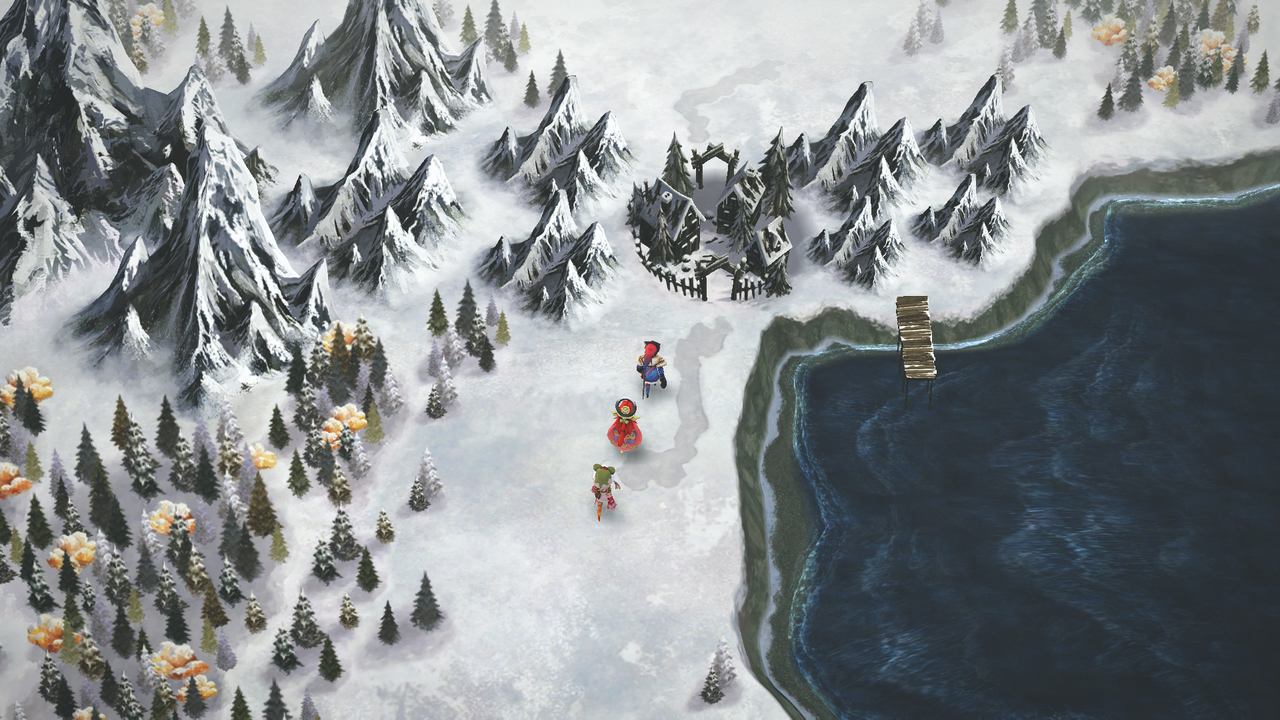 Setsuna begins with a captivating premise. Our “hero,” Endir, is tasked with murdering the titular heroine, who is being sent as a human sacrifice to save the realm from the unending invasion of monsters for some unknown reason. It snowballs from there into a globetrotting epic, complete with light (predictable) twists, touches of sadness (I had to laugh at this one NPC kid who told me “I can’t wait for Setsuna to get back from her trip!” — yea, about that), and a semi-likable cast. What I really like is that there’s a very short intro (in JRPG terms, at least) and lead up, and you’re in the cut in around 20 minutes. Not bad at all.

The cast is a bunch of caricatures (the peppy untrusting friend, the stalwart warrior with a spotty past), but they’re fun to watch. Setsuna plays the part of the likable healer to perfection (much like Luna’s straight-faced portrayal in Lunar), and Endir is basically Chrono re-incarnated. He’s mostly silent outside of some dialogue choices, he sports a blue and red motif, and has an every-man thing going on. But the Chrono comparisons don’t stop there, as the entire game is basically built on that foundation as well as drawing upon other Square staples.

Battles have an optional Active or Wait system to choose from, players have to save on the world map or at specified save points, you can rename characters, and there’s even a massive Auron homage in the warrior character Nidr. It’s endearing, but at times, dull. I love seeing all these callbacks but when the cast doesn’t transcend or even meet the expectations set forth so many years ago, it can be grating. It’s not like Setsuna particularly fails in any regard, it just feels like it’s going through the motions on occasion.

It’s all lovely, though. The snowy atmosphere, the beautiful and functional artwork, the amazing 8-bit icons that dot the menus, optional battle voices (neat), and a wonderful piano-based score are particularly of note. And so is the battle system, which again draws heavily on Chrono with its tech system (including team techs), knockbacks, area-of-effect powers that take positioning into account, multiple Talismans and weapons to equip, and Spritnite — the materia-like slotted items that can double as tech providers or passive bonuses. All of these are presented with a rather unwieldy (in the sense that there are far too many options) but serviceable UI.

Combat is deliciously retro with gauges, no movement or dodging, and battles that instantly transition in the field. Given the depth of the Spritnite system, you can customize your (three-person) party as you see fit, with any number of roles at your disposal including tank, damage, and magic user archetypes, and the option to swap in characters outside of battle. Again it’s all functional, but the lack of a cursor over the head of your party (leaving you at the mercy of knowing all their names) can be taxing to acclimate to, especially when you’re learning the difference between Endir and Ndir. It’s such a minor thing, though.

When you’re out and about you’ll have the chance to pick up ingredients and chests hidden around the field, fiddle with equipment menus, and do some light micromanaging. It’s never too complicated, always fitting within the confines of the lower “budget” price of the game. Setsuna clocks in at roughly 25 hours or so, which is brief enough to not overstay its welcome and drag. Naturally it doesn’t really have enough room to stretch its legs and challenge hardcore players, because once you’ve really gotten a handle on the game’s systems and equipment, it’s basically over. In some ways it’s meant as an entry point into JRPGs and is at odds with its identity. 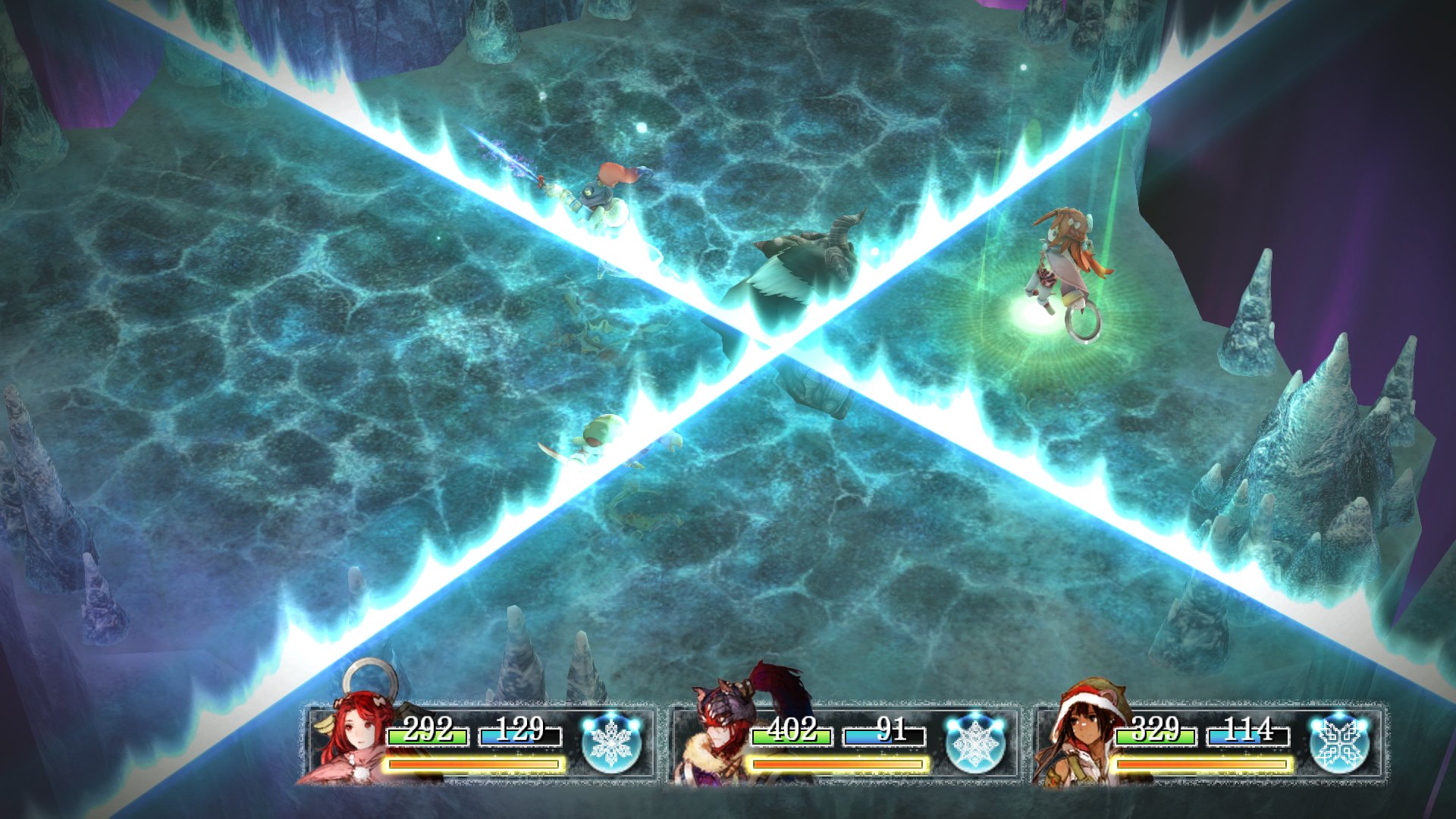 I actually quite like the adherence to nostalgia, as Square is only giving fans with they want after years of complaints that projects like Final Fantasy XIII strayed too far. But by the same token of goodwill, it plays it a little too safe in regards to its at times predictable story, and doesn’t really do anything new that moves the genre forward in any way. Still, if old school is what you want, you’ll get it.