I literally fell asleep playing Hyperdimension Neptunia. Full on, snoring for thirty minutes while my characters bobbed up and down in battle stances waiting for me to input their next attack. Now I will admit it was late, but I have never been so disinterested in what I was doing in a game that I’ve fallen asleep before, and that includes some very late-night romps through other turn-based JRPGs.

There are two things that people always talk about when discussing an RPG: the world and story, and the battle system. Sometimes when one is really good, it can make up for the other. An RPG with a crappy battle system — but a great story — is still playable because you’re pulled through it by the narrative.

Likewise an RPG with a bad story and a great battle system can be fun simply because beating up enemies is fun. Unfortunately, both aspects pretty much fail in Hyperdimension Neptunia. 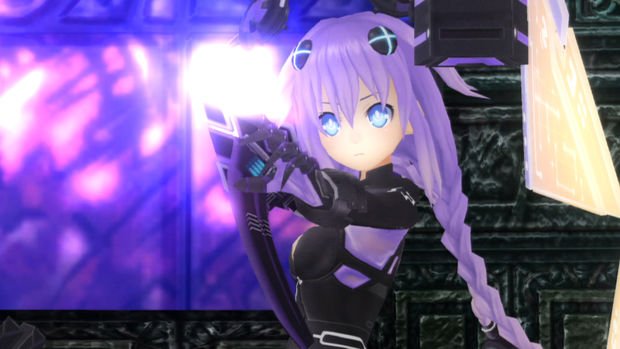 You wouldn’t be blamed for getting excited when you hear about HN‘s premise. The idea behind the game is that the videogame industry is an actual world with the major game consoles battling it out against each other in the form of sexy anime goddesses who rule over four separate lands that supposedly take on the characteristics of the four major companies (we’re including Sega because, well, they distributed the damn game).

There’s Black Heart, the goddess of Lastation (PS3/Sony); White Heart, the goddess of Lowee (Wii/Nintendo); Green Heart, the goddess of Leanbox (Xbox/Microsoft); and Purple Heart, goddess of Neptunia (the unreleased Sega Neptune console/Sega). As far as caricatures of their representative companies, they’re all pretty spot on. Though Leanbox, being sort of a medieval country, doesn’t really jive with my view of the Xbox. When the game opens and establishes these four characters, you start to believe the developers were actually being pretty clever. That belief is wrong.

The general gist of the story is that the other goddesses decide Purple Heart should be the sacrificial lamb; so to end the war between the consoles, they kill her off. She’s revived in human form by a mysterious female voice as a young girl named Neptune. Neptune has no memory of her previous self or the world, but is tasked with finding four keys, one located in each land. Joining her are Compa (a representation of publisher Compile Heart) and IF (developer Idea Factory). You’re pretty much stuck with these three throughout the entire game until near the very end. There are two other characters you can kind of unlock by completing side-quests, but you can’t play as them until you download some future DLC (with another two already released in Japan). 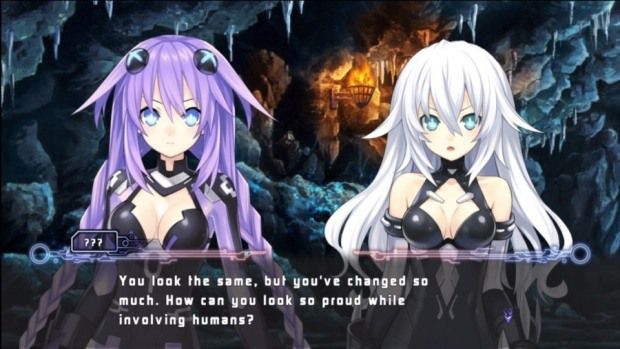 As I discussed in the opening, it’s really the story and battle system that make an RPG, so let’s dive into those. We can start with the story since this is the aspect of the game that I really thought I was going to enjoy, but sadly, the game misses a lot of chances to be clever and funny. Instead, it’s just blunt and boring.

The perfect example of this is the world where the game takes place. It’s called Gameindustri. Seriously. That’s about as deep as the game referencing humor goes as well. Jokes are either simple references to gaming things (Oh! Look at those people stacking odd-shaped blocks!) or bad puns that start out funny, but get ridiculously annoying by the end of the game. The clever goddess representations that you thought were coming at the beginning of the game devolve into no more than slightly veiled references to cultural gaming cliches.

It doesn’t help that there isn’t actually a world to explore. Unless you’re in a dungeon, many of which are simply the same narrow hallways reorganized into a different shape, you’re navigating menus. The entire story is also told through still animations over backgrounds so, as a matter of fact, there is literally no outside world to explore.

It’s like reading the description of an amazing world on the cover of a book and then opening it up to find out it’s simply an index and some pictures hinting at the world you want to read about. Evidently, this is how Idea Factory has made previous games, but I don’t see why that is an excuse to keep doing it. Exploring menus is not fun, and by adding repetitive dungeons into the mix, you have almost no reward for actually taking part in the game world. Thus, the entire quality of the RPG rests on the battle system, which one would hope was fantastic because clearly no time was spent on the creation of the world. 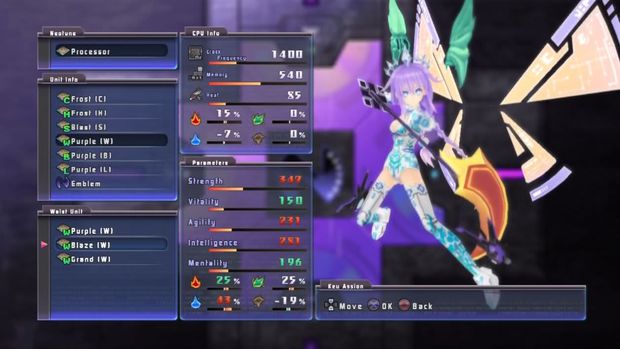 Unfortunately, the battle system doesn’t pan out for a myriad of reasons. On the surface it actually appears like it could offer up enough variety and challenge to save the game. The game features a turn-based battle system that uses points for moves and combos to chain together attacks. Attacks are mapped to the circle, X and triangle buttons with block mapped to the square. You can chain together button combinations (up to four) to perform a combo, with each button selection leading to other options like a branching tree.

Depending on how you organize your combos, you’ll get bonuses at the end of a combo that can either link your combo into another one with an increase in your points for more and varied attacks or switch your character for one of the characters in the back row. The latter is almost entirely useless, as you only have three characters for the majority of the game, and switching means that one of them would be wasted in the back instead of being able to attack readily.

The combo system, which seems interesting and deep with its ever-branching options, loses most of its charm very quickly. Once you level up a few times, you realize that you’re only going to be using the latest and greatest moves over and over again. Almost every attack is replaced rather quickly by another, more powerful one and the combo system ends up feeling relatively useless. This is especially so because the game’s difficulty is horrific (even hard mode is a snore). 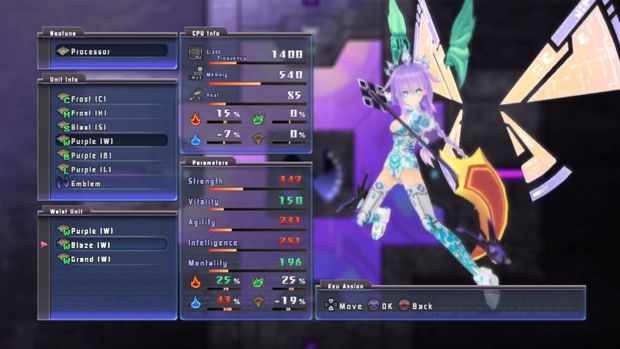 Except for bosses and a random bad guy here and there, you pretty much tear through every battle in the blink of an eye, pressing the same buttons over and over again. There’s a guard break system that eventually becomes totally useless and strategy is a thing that flies straight out the window the second you level up once. On top of this, Neptune can turn into her goddess counterpart within one turn of a battle at no real cost and become ridiculously powerful.

Battles simply become a matter of waiting for her turn, transforming into her goddess mode and then killing the bad guy. The goddess mode also has a separate equipment mode in which you can equip Neptune with different goddess armor. The utter pointlessness of this is underlined by the fact that the game never really explains what half the stats the armors have mean. I literally only changed it because it made Neptune look different, not because I saw a change in the the battles (which were only lasting ten seconds anyway).

Despite all of these issues, I could still see having fun with the battle system thanks to its incredible amount of editability (you can even upload your own images for attacks) and the nods to many classic games in some of the attacks. However, any goodwill I could muster was completely destroyed by the game’s health/magic system. Instead of the standard potions or spells that you can use any time during a battle, the characters in HN have item skills that are earned when you level up. These skills are not triggered by the player wanting to use them, but are instead assigned usage percentage points for how often they should occur.

For example, if you wanted to use a healing spell because your character was almost dead, you couldn’t. Instead, the computer would trigger it once your character’s life got below a certain percentage. Of course if you didn’t have enough points to make the cure spell occur one-hundred percent of the time, then the spell could not happen at all and you’ll just die because the computer randomly decided curing was not a thing that would happen this turn. 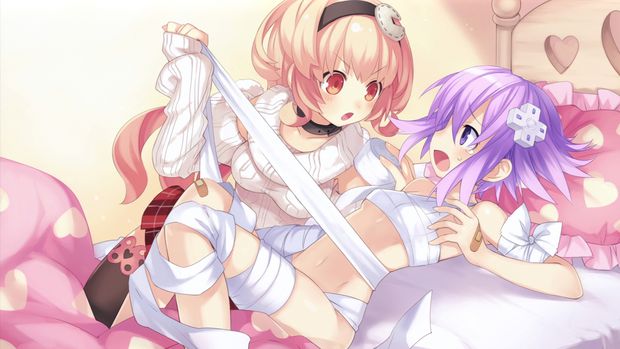 This means that almost every type of spell you can cast on your own in a normal RPG — health, poison cures, paralysis cures — are left entirely up to chance if you don’t have the points to crank them up to one-hundred percent. It is twice as annoying as it sounds, and leads to you losing battles that should easily have been won. If I wanted to lose three hours of work thanks to luck, I’d go to Vegas. To be fair, you can adjust the percentage chance of a spell being cast mid-battle, but that makes the health system all the more annoying; the developer could have simply put in a normal one and let you do it yourself.

I will give this game props for one thing, and I only do it because this one thing shines so brightly among the rest of the game that I feel I should mention it. The voice acting is surprisingly good, and while the bad puns are still punny, the actual delivery is done well. Sadly, all they accompany are the static anime images that can only jump from one frozen emotional state to another.

Even if they chose this option for budget-saving reasons, it would have been a better idea to cut back on the already sub-par graphics and just have even the slightest attempt at real cut scenes. Of course, looking and feeling like a budget game doesn’t seem to have meant savings for us as you’ll be paying $59.99 just to get bored. 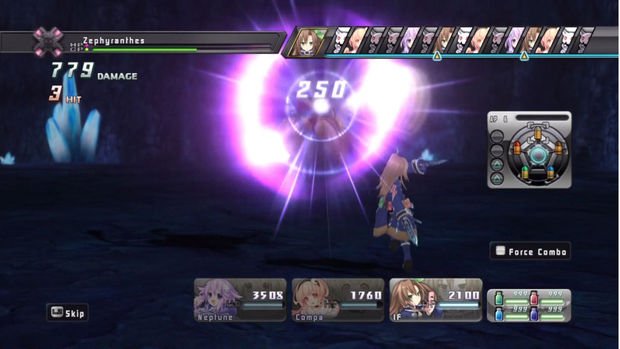 A few other things of note, since I’ve already rambled on far longer than I should about the game. There are a plethora of side-quests that amount to almost nothing more than a way to grind your character. Collecting items in dungeons is relentlessly pointless and you rarely get anything good from the bosses of these side-quests, either. Whatever you do get can usually be replaced quickly the next time you go to the store.

Each character also has a unique special ability you can use while exploring a dungeon. These basically amount to the developers realizing that the only part of their game with actual gameplay was repetitive and bland, so they had to put in one more thing for the player to do even if it meant nothing to the actual game experience. Oh, and you can’t sell your old equipment. Unless they hid the sale shop somewhere where I couldn’t find it (Which could be true; there were a lot of action-packed menus to flip through.). It seems you’re pretty much stuck with every single item you acquire throughout the 30-plus hour game. Wooo, more menu fun!

What we have with Hyperdimension Neptunia is a shell of an RPG. The idea for the world is there and the idea for a unique battle system is there, but nothing is actually inside these ideas. Maybe Idea Factory should have turned the game over to Actually Making An Interesting Game Factory once they came up with the concept for the game. Or maybe they should have just not made it at all.