Falling in love with potential can be dangerous. A mistake people make far too often when forging new relationships is placing undue expectations on others. People grow and change, but it’s impossible to know how or when that will happen, let alone control it. Counting on some sort of metamorphosis (or trying to trigger one) is usually a recipe for disappointment or disaster.

It’s the same with videogames. Acceptance is the basis of any good relationship. So, if you’re loath to put up with the bad times to get to the good and hoping something will eventually turn the corner, well, let’s just say it’s probably not going to work out in the end.

I’ve come to learn this lesson the hard way with the Hyperdimension Neptunia series. Idea Factory’s burgeoning role-playing game franchise has such a promising premise. However, having given it a few chances now, I’m convinced it will never mature or develop into what I dreamed it, one day, could be. 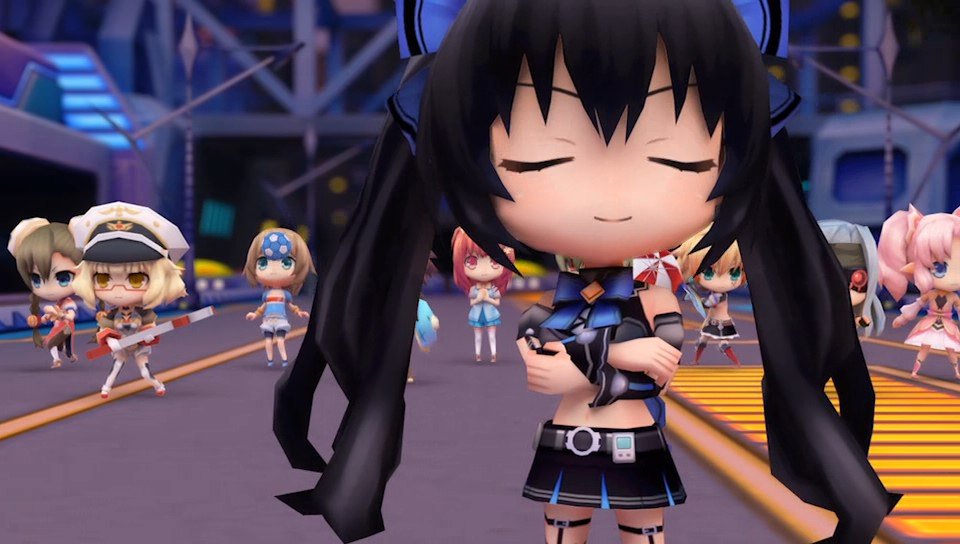 Why was I so hopeful for Hyperdimension Neptunia? Well, the concept of a game that parodies the console wars is almost too good to give up on. The series follows a group of anthropomorphized gaming consoles, each the ruler of her own kingdom, all vying for dominance in what’s effectively a grand popularity contest.

It’s a cute idea, at the very least, with the potential for so much more. I hoped it would be a clever satire, something introspective and comedic that poked fun at the industry in an interesting or meaningful way. Instead, I discovered one jejune RPG after the next, a middling collection of games that lean all too heavily on fan service as crutch.

What I wanted this series to be and what it is are two very different things. I probably should have realized that before now, but well, here we are. 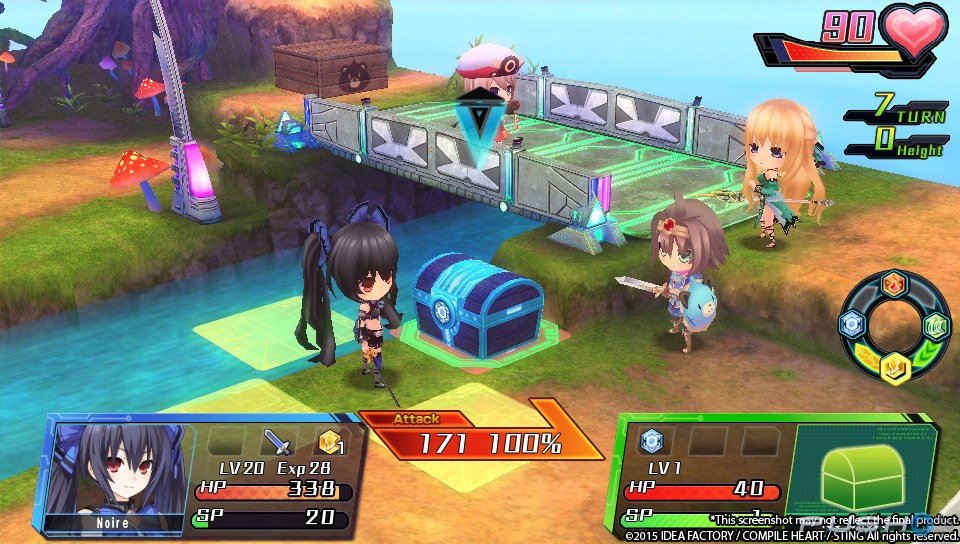 The latest entry in the franchise, Hyperdevotion Noire: Goddess Black Heart, may be a spin-off, but it hews closely to its source material — albeit with one notable exception. This is a strategy role-playing game, rather than a more traditional one. However, aside from the difference in combat, those familiar with Compile Heart’s previous efforts will know exactly what to expect out of this one. But let’s talk about what makes this entry unique.

The action takes place on grid-based battlefields. There, players act as the general of a small army, moving units to support allies and assault foes. In addition to the SP gauge, used for special attacks, there’s an LP meter, which fuels even more powerful moves and allows the central protagonists to transform into their more powerful goddess forms. LP is an interesting resource, as it’s gained by performing special attacks while flanked by friendly units. This will result in a kissing animation, which doubles as a power-up.

This system is a key component of a successful strategy on the battlefield, but it isn’t without risk. As you might expect, clustering into tightly-packed ranks makes units more susceptible to area-of-effect attacks, meaning it could as easily pave the way to victory as it could to your undoing. 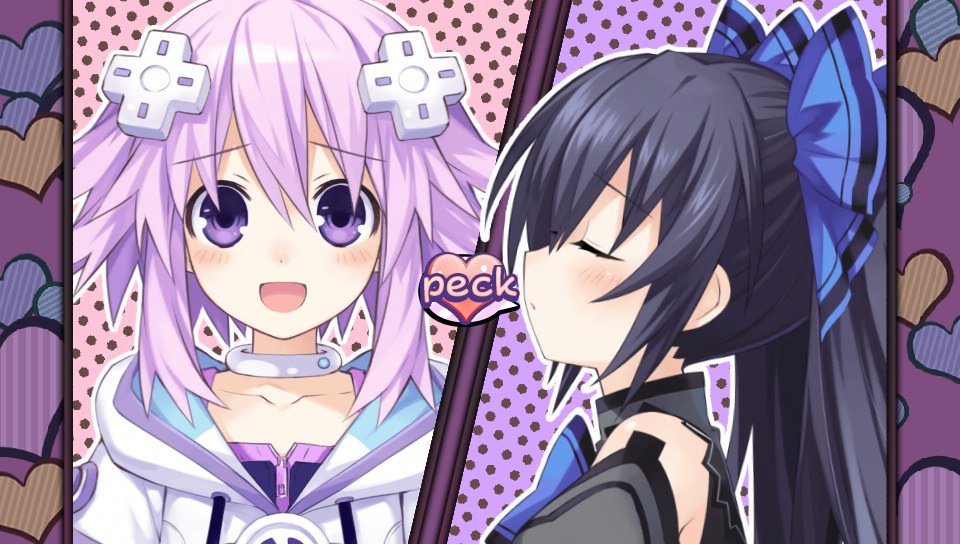 The level design at work here is interesting and varied, constantly shaking things up with a range of traps, puzzles, and obstacles. The objectives are similarly diverse, though I’m not sure the assortment makes the combat terribly compelling. Despite minimal repetition, the pace of play here feels inordinately slow. Battles often feel overly long and drawn out, especially when a protracted series of turns are dedicated entirely to positioning. There are a lot of lulls in the action that mar an otherwise competent tactical experience.

The story doesn’t help in that regard, with a hackneyed plot and shallow, tropey characters that talk forever about nothing at all. There’s some mild referential humor to be found, but it’s mostly about the fan service. It has plenty of pantsu and giant, jiggling breasts, which is made all the more creepy by the new chibi art direction. The entire cast look like abominable hypersexualized infants.

Speaking of said characters, most of the ones you’ll be taking into battle over the course of the game are based on popular Japanese videogame franchises. This was actually one of my favorite parts of the experience, as taking personifications of the Street Fighter, Yakuza, and Dragon Quest (I could go on and on) series into the field was a real joy. Their special attacks (like the Metal Gear-inspired Lid’s cardboard box stealth attack) are particularly charming, and serve as nice nods to players who are familiar with the source material. 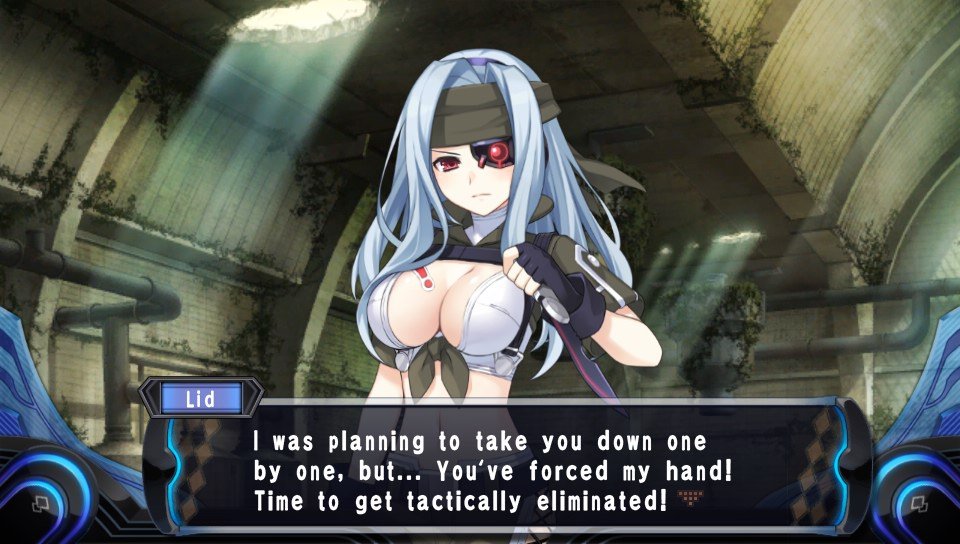 It’s just a pity that these characters are often relegated to a support role, as the familiar faces are far more useful on the battlefield. Since Noire, Blanc, Neptune, and Vert can all transform into their extremely mighty goddess forms, it pays to deploy them over your favorites. While transformed, the goddesses are able to fly, making them immune to traps and elements of the landscape that limit conventional troopers. It’s a lamentable design choice, impelling players to use the same, stale heroines rather than the revolving door of refreshing newcomers.

There are other questionable choices that hamper the experience, like: lengthy enemy turns, the constant influx of tutorial messages that are more busy than informative, a loading period at the beginning of each fight where the game makes you watch combatants materialize out of thin air, one-hit kills, and a bizarre movement mechanic that doesn’t allow you to move units exactly where you’d like them to go — even if that space is in range. There are just dozens of little annoyances peppered throughout the experience that require the player to be very patient and forgiving. It’s unfortunate because there’s a decent strategy RPG at Goddess Black Heart‘s core, but the game just can’t seem to get out of its own way.

Hyperdimension Neptunia fans may well enjoy this one, but I can’t count myself among them. The series has an alluring premise, but it just doesn’t push the idea far enough for me. The cloying characters and banal story are just so incredibly vapid, and the respectable strategic gameplay just isn’t enough to compensate for the myriad of drawbacks and stumbling blocks.

Sorry Noire, but it’s time we go our separate ways.