The last time inXile graced the world with a console roleplaying was with The Bard’s Tale back in 2004. Since then, the studio has been quietly working away on a number of mobile games, so it’s certainly interesting to see the company return to full-scale RPGs after making games like Super Stacker, Super Stacker 2 and Super Stacker Party.

Hunted: The Demon’s Forge has nothing to do with stacking, super or otherwise. 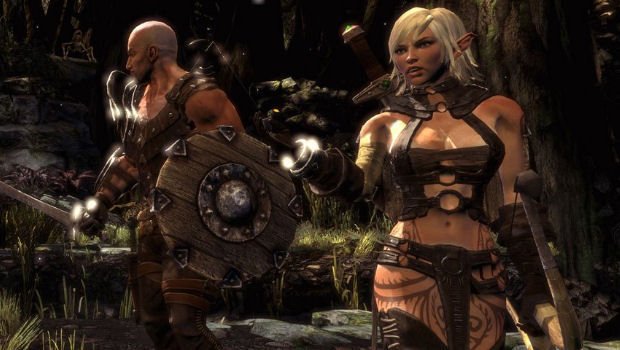 Much has been made of Hunted‘s unique blend of two different but equally well-worn genres — roleplaying games and cover-based shooters. In fact, a popular way of describing the game has been to dub it Gears of Warcraft, due to its very obvious modeling on two highly successful franchises.

In truth, the game has very little in common with roleplaying games outside of its aesthetic qualities. There’s no leveling up, no inventory, and very little in the way of loot. While there are a selection of weapons that appear with increasingly powerful attributes, characters are restricted to one melee and one ranged weapon at any time. You also get a shield and one piece of armor. That’s it for your equipment.

So, Hunted is not so much World of Warcraft. The thing is, it’s not much like Gears of War either. While ranged combat with bows is a central focus of the game, and a cover system is in place, it won’t take you long to work out that using cover is a bad idea. In fact, even manually aiming is a waste of time as it’s far more useful to run-and-gun — or run-and-bow, as the case may be. If you’re looking for a game that truly mixes shooters and roleplayers, you actually won’t find it here. 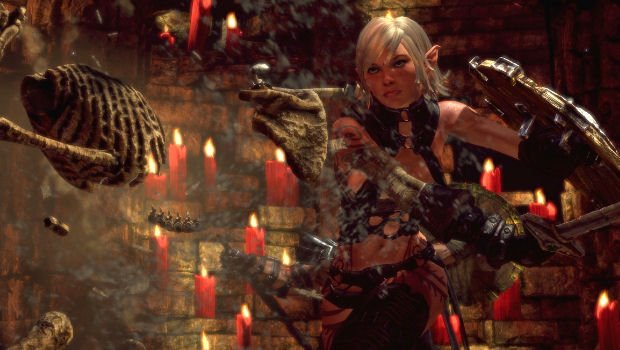 That’s not to say Hunted is a bad game. In fact, despite failing in its central objective, Hunted is a surprisingly fun action title that gives you a choice between ranged warfare and hack n’ slash brutality, managing both with respectable adequacy.

The Demon’s Forge stars two antiheroes, Caddoc and E’lara, a pair of mercenaries who find themselves working for a mysterious woman on a particularly shady quest. The story is pretty forgettable and your mileage may vary in terms of whether you find the protagonists charming or irritating, but it’s a relatively inoffensive narrative with a lighthearted edge to it, in spite of the dark visuals and a handful of grisly concepts. There’s also an intriguing method of getting alternate endings, something that could have been truly outstanding if the developers had fleshed it out a lot more.

Although both characters are equipped for ranged and personal combat, Caddoc and E’lara are each suited to a particular role. Caddoc, with his ability to unleash a powerful physical attack and equip more powerful hand-to-hand weapons, is the fighter, while E’lara uses a wider range of bows and unique projectile attacks to provide support from afar. The two characters compliment each other quite well, though I find that E’lara is much more fun despite my usual gravitation toward melee characters. It’s not that Hunted‘s melee combat is particularly bad, it’s just not very well refined. Enemies tend to crowd the player and it’s much more effective, not to mention fun, to circle them and repeatedly fire arrows (tip: Always use the weaker, “Fast” type bows, as they are misleadingly more deadly than stronger, slower ones). 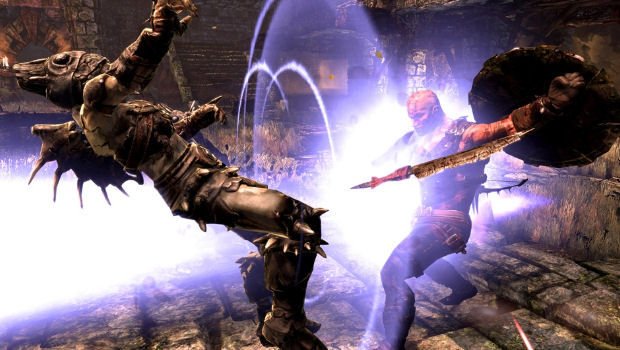 As well as general attacks, players will use collected crystals to enhance a variety of character-specific and general magic attacks. E’lara can charge her arrows with unique properties, such as ice and armor-penetrating arrows, while Caddoc gains offensive charges and whirlwinds. There are three battle spells that either character can use — lightning, fireballs and area-of-attack sigils. Each skill and spell can be further upgraded by using more crystals, with benefits including greater damage, less mana cost, and wider areas of effect.

Although they don’t level up, Caddoc and E’lara can fulfill certain gameplay objectives to improve their attributes. These requirements are naturally earned through the course of play — for example, earning a certain number of ranged kills can increase the damage done with arrows. These extras are cool, and the health and mana extensions are very welcome, but there’s not much to the character development that will dramatically alter the gameplay.

As well as combat, the game serves an occasional puzzle, mostly centered around the co-operative powers of Caddoc and E’lara. As with so much in this game, the attempts at brainteasing are shallow at best, usually consisting of simply “push this wall” or “shoot an arrow here.” The more puzzling elements are often completely voluntary, hidden off the beaten path and often bestowing optional rewards — usually a weapon with a powerful charged attack that, when out of charges, will become much weaker. Until you unlock a secondary weapon slot, these “rewards” are pretty worthless, as any player will foresight will keep a permanently moderate weapon over a temporarily powerful one. 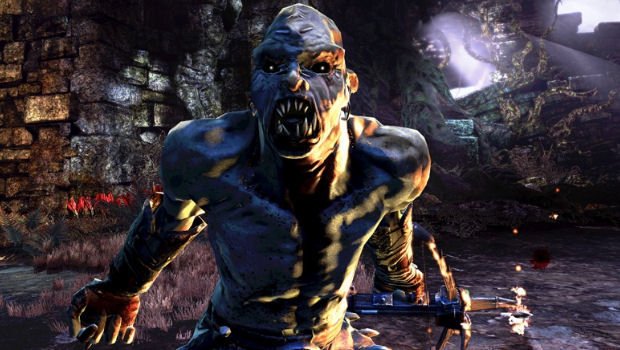 Hunted is a pretty decent game at its core, and the mix of fighting styles works better than one would expect, especially from a company that has never been known for action games and has spent over half a decade working on very small titles. While there’s a definite lack of polish (for instance, players can perform executions on weakened enemies, but the animations never sync up properly), The Demon’s Forge is a fun ride with combat that mostly remains quite tight.

However, Hunted is let down by the fact that it consistently reinforces one’s belief that it could have been so much more. The bare bones approach to storytelling and character development is surprising, when a little more depth could have made this game a real keeper. Nowhere is this more apparent than with the boss fights, most of which are built up as large, epic encounters, but end up as rather short, underwhelming, unchallenging fights. Every time Hunted threatens to make a leap from decent to great, it seems to sink back to complacency, afraid to risk aiming above its station.

Playing with an AI partner brings its own set of frustrations, since your allied character seems intent on making life difficult. It will steal your kills, frequently stand in the way of your ranged fire, and run to weapons racks to steal the loot before you. If you accidentally swap your shield for one you don’t want, it’ll likely pick up your superior equipment before you can correct your mistake. The AI is unhelpful, greedy and selfish … and in that way, inXile possibly deserves praise for creating a partner that perfectly mimics a random Xbox Live partner. 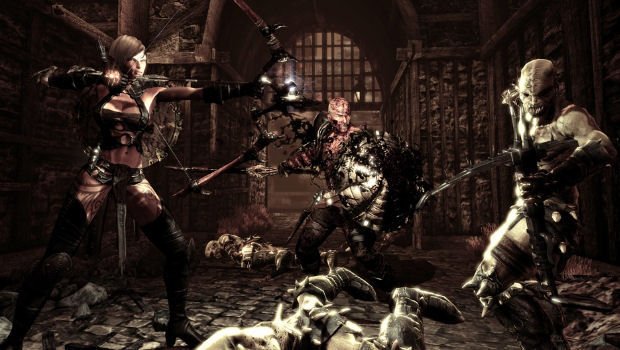 As far as the vaunted two-player option goes, I’m going to tell you right now that I wasn’t able to try it, but that my inability to play adequately matches the experience players will have. The game does not feature drop-in/drop-out co-op, something that I would’ve thought was obligatory for a campaign-driven game like this. With that in mind, I tried to find a game over several days, at different times, and came up short. Usually the game found nobody online, but sometimes I’d get a “game session full” message. If I had been able to play the game while keeping it open for a player to drop in, I may have had luck, but no player should be expected to sit in an empty lobby, hoping that another lost soul will wander through Hunted‘s desolate servers at the same time. I am absolutely baffled that a game so reliant on co-op gameplay offered such a pathetically lackluster matchmaking system.

The same can be said for Hunted‘s “Crucible” mode, inXile’s answer to a map making system. To call it a map maker, however, would be to heap grossly undue praise upon it. In reality, Crucible mode offers potential level editors a selection of pre-packed arenas in which they get to control the type and number of enemies, the available weapons, and various other simplified gameplay modifications, all of which are unlocked by collecting gold in Adventure mode. The actual potential for individuality is rather sparse, and players can’t even keep their developed characters from the campaign. Yet again, what could have been an incredible and differentiating option comes up incredibly short.

If I sound harsh, it’s because I genuinely like Hunted and enjoyed the majority of my time with it. However, to see a game do itself such a disservice and offer so little in comparison to its significant potential is exasperating. It’s obvious that Hunted was never going to be a triple-A smash hit success, but that doesn’t mean it had to willingly underachieve. Instead of getting a uniquely special game, players will get a relatively fun little action title with an overwhelming sense that many things are missing. 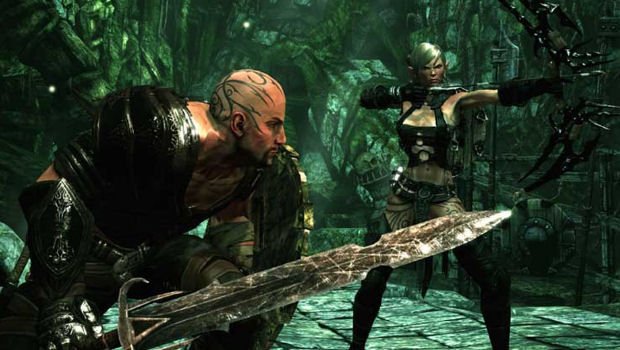 I want The Demon’s Forge to be a success because I want inXile to make a lot more games and Hunted to become a series that fulfills its promise. However, I have to be honest and say that you will miss nothing at all if you choose to ignore the game. I’d definitely recommend you try it out if you’re bored and looking for a good time waster, but playing Hunted is just not essential, especially in a period where bigger and better games are looming on the horizon to snap up your time and money.