The racing game scene was once a far more colorful place. At any time you could be driving a Volkswagen Beetle through Jurassic Park or going up impossible climbs in your futuristic turbo bike. The early 3D era was, after all, a time of experimentation, but as the market progressed, and all the acids and bases were boiled down, we were left with a pretty monotone genre. No, I don’t know anything about chemistry.

Today’s racing market is dominated by racing simulators; your Gran Turismos, Project Cars, Need for Speeds. Arcade-style racing games still exist, but even high-profile franchises have waned out of existence, such as Burnout and Motorstorm. It’s a bleak time to be an arcade racer, stuck somewhere between the success of Mario Kart and Forza. It’s times like these we turn to the indie market to deliver us back to an era where we struggled to pass those checkpoints. It’s time for games like Hotshot Racing. 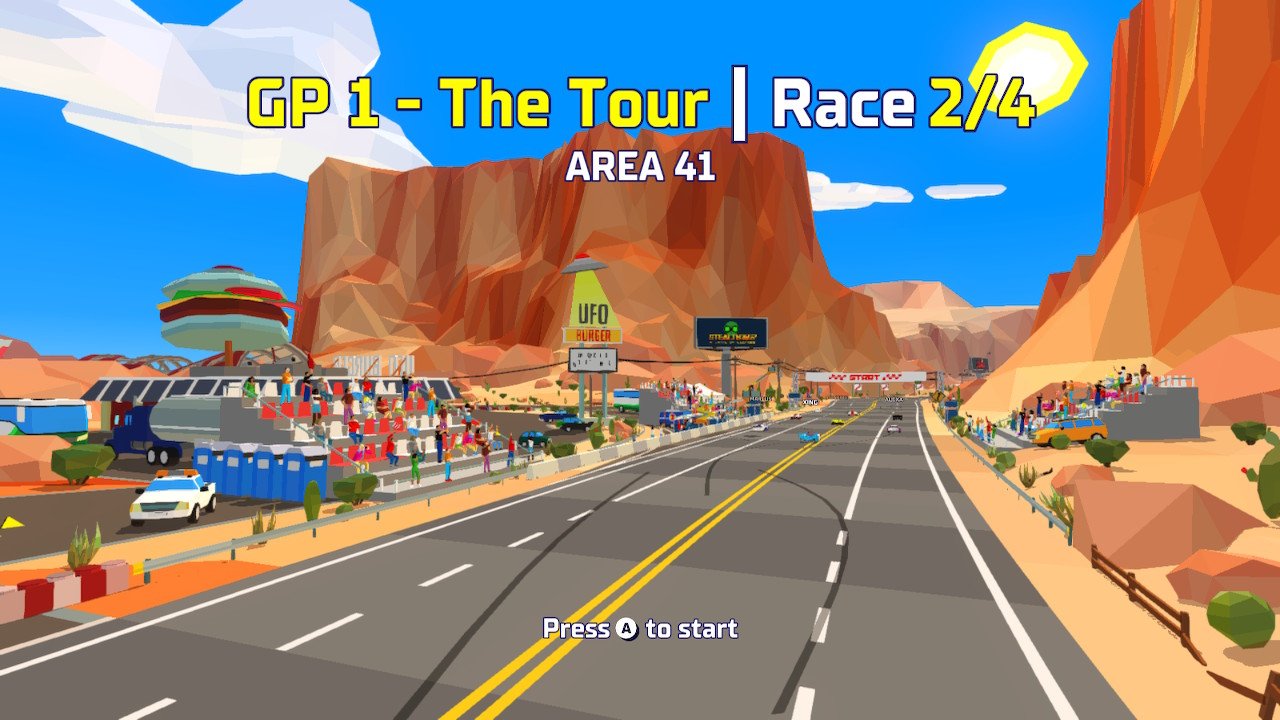 With a developer that has had its hands in games like Burnout and Midnight Club and assistance from Sumo Digital, the people behind the recent Sonic & Sega All-Stars Racing games, Hotshot Racing certainly has pedigree papers. It’s inspired by classic Sega arcade racers like Virtua Racing, Sega Rally, and Daytona USA with drifting mechanics similar to games like Ridge Racer.

Hotshot Racing looks the part. Its chunky, low-polygon models and bright colors hearken back to a time when standing out meant more than just having the most simulation features. The level of detail has not been sacrificed either, with every vehicle having its own gorgeous cockpit view with optional knickknacks for your dashboard. Drivers demonstrate unique personalities with exaggerated animations and expressiveness. It’s an infectiously cheerful game.

The retro aesthetic carries through to the sound design. You’re treated to the disembodied voice of an enthusiastic announcer who merrily shouts out every checkpoint you pass and gives you a brief introduction to every track. Drivers are also quite talkative too, expressing their personality at every turn and criticizing every bump you take. The music will also take you back to the ‘90s with its chirpy, lighthearted energy. I didn’t find any of the driving tracks stood out, exactly, but they blended well into the racing.

Tracks also demonstrate the exaggerated features of ‘90s racers. I made a reference to Beetle Adventure Racing at the start of this review, and that’s because a lot of the track dressing reminded me of it, straight down to having you drive through a dinosaur park. Some will have you drive through the interior of a casino, while others simply treat you to visuals of rolling waterfalls. If you can take your vision off the track for a moment, you’ll always have something to delight your eyes.

On the other hand, the track design itself left me a little wanting. Each one is basically a simple circuit; some mutation of an oval. There are no figure-8’s or overpasses, no impossible jumps across hazardous terrain, no shortcuts for those daring enough to attempt them. This may be more realistic in design, but I thought we abandoned realism when we put a stegosaurus next to the track. 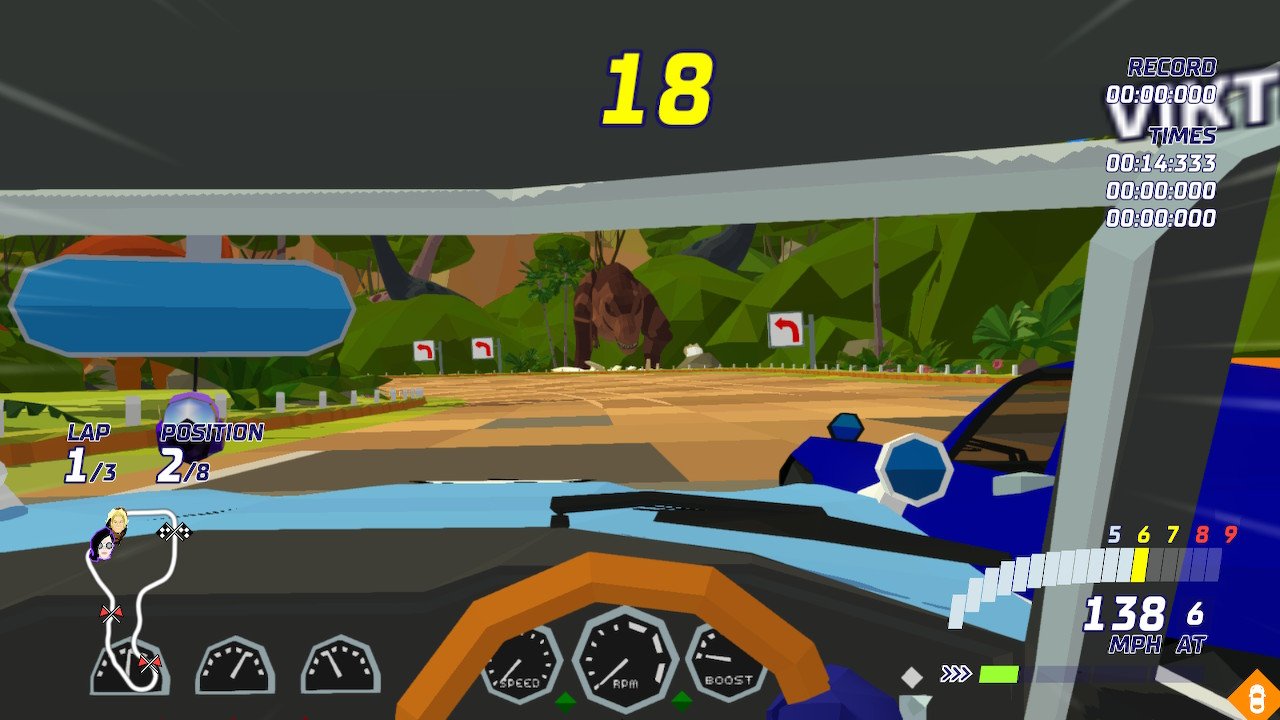 There are four grand prix to participate in, each containing four tracks for a total of sixteen. I can do math. You can race them at three difficulties. I tore through normal and hard, but have barely managed to scratch expert. It’s not a bad career mode, but when a lot of the tracks feel overly similar, it weighs in a little light.

You’re given money as a reward for your successes that you can then spend on cosmetic items, but the money is a bit much. There’s eight drivers, each with their own garage of four cars, but are you really going to go to the effort of unlocking everything for each one, or are you just going to pick a few favorites and make them look pretty? After you’ve done that, cash just kind of piles up.

Alongside grand prix, you’ve also got your additional modes. Time trial is sort of a given, but there are a couple flavorful additions. Cops & Robbers mode has you make a getaway from the police as they try to damage your car and deputize you like they’re carrying some sort of law enforcement disease. There’s also Drive Or Explode in which you have to do exactly that; make all the checkpoints and keep your speed up or your car will abruptly disintegrate. They’re fun little modes, especially if you have someone to split screens with. 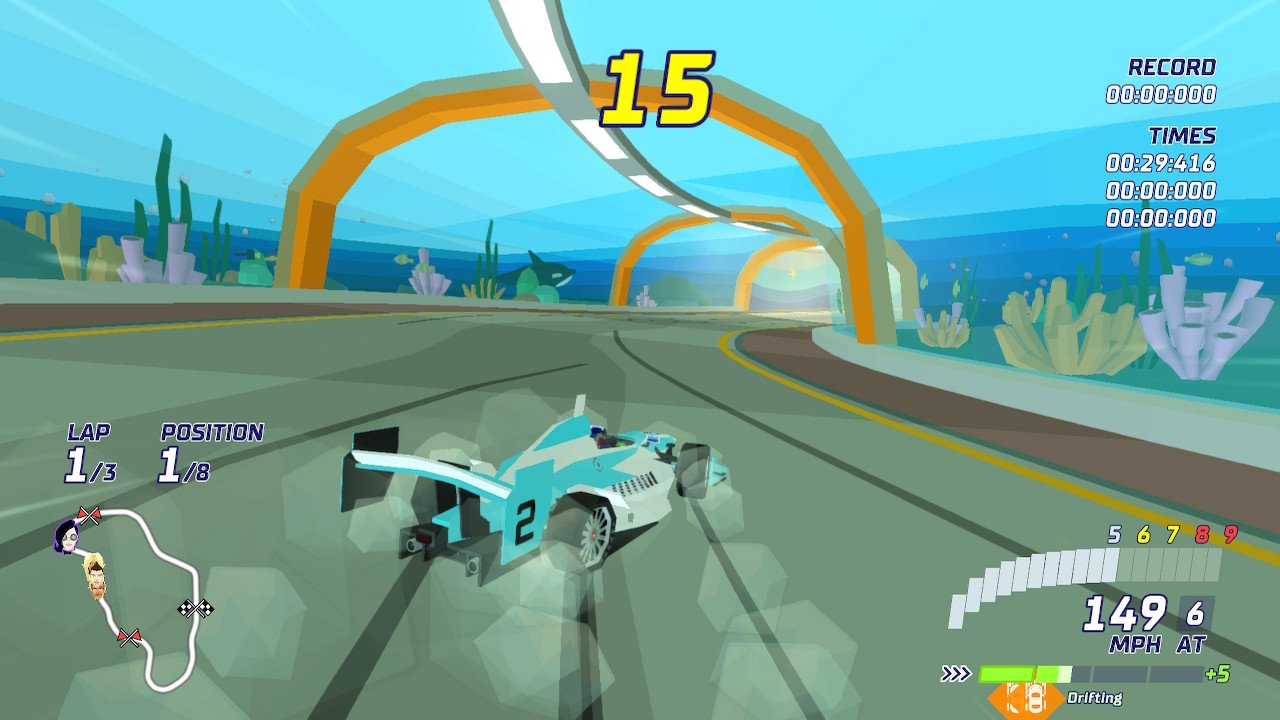 As for the driving, it works how you’d expect it to. Any turn tighter than a curve and you’ll want to throw your back tires out into a drift. Tapping the break button is all it takes to kick up some smoke, and the drifting feels nicely tuned. Each car has its own drifting stat and you can really feel its variance between cars. I found myself able to play just fine in both third-person and cockpit view without much difficulty.

The other racers feel a bit rubber-bandy. I’m always wary about bringing this up, because I’m quicker to blame myself for my failures than any game facet. However, even on normal mode where I dominated the track, my opponents were never far behind. They stay nestled in a tight pack at all times and getting sucked into it can mean getting banged around. On the other hand, they won’t slow down for you if they get too far ahead, the jerks.

Speaking of which, the other drivers seem to have no regard for the vehicle they’re piloting. They will bash into you unapologetically. Most of the time when I fell behind in normal and hard difficulties, it was because I was spun out by one of my opponents. It lends to the arcade feeling, but can be a bit maddening. 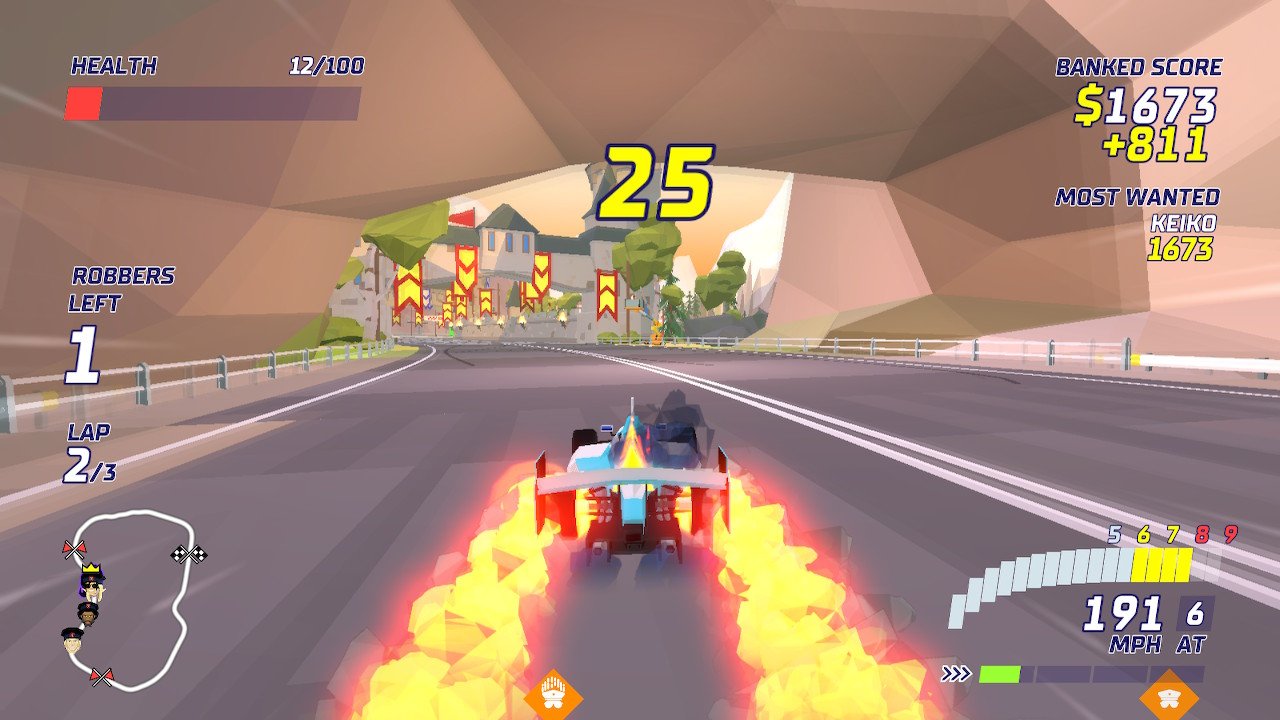 I should also mention that the online mode seems unfortunately empty. I queued a few times, and we always struggled to accumulate the required four players to start a race. Once I was in there, I didn’t have any issues, but finding people was a problem.

I have to admit, I found Hotshot Racing to be quite enamoring. I don’t have much nostalgia for the early days of 3D racing games, but I do appreciate a good arcade racer, and that’s exactly what this is. Its cheery sound design and visuals are endlessly charming and the driving feels exactly as it should. If you feel the need to go back to the simpler days of racing games, this certainly fits the bill. This likely won’t be the last time I take it for a lap around the track.