A bit of the old ultra-violence

Pointing a gun and firing comes easy in videogames. Ethics and morals never factor in during those moments of decision and there certainly isn’t any remorse. These are virtual bullets reserved for virtual enemies, after all. This thoughtless violence has become central to many game narratives as of late, including Dishonored, Spec Ops: The Line, and now Hotline Miami.

“I’m here to tell you how to kill people,” a grizzled homeless man tells the player upon starting the game. As if we don’t already know. 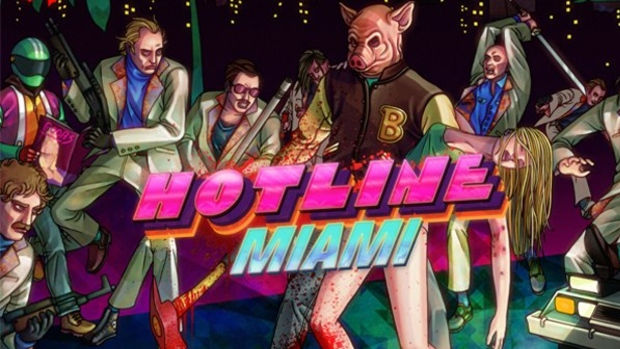 Hotline Miami is a game about impactful killing. It asks players to focus on the details of invasion and murder that we don’t often consider in games. If Max Payne diving through a window, holding guns akimbo, is on one side of the spectrum of action games, Hotline Miami exists on the other side. And, it’s a very lonely place.

After a brief, ominous intro where a horse and rooster boss the player around, you are sent off to do some good old-fashioned killing. While the top-down perspective brings to mind Smash TV and Loaded, Hotline is not so generous with health and ammo. You’ll be lucky to find a gun with a full clip and even luckier if a bullet doesn’t send you back to the start. One bullet is all it takes, so being quiet and clever is essential to survival.

As a result, the game puts an emphasis on stealth and environmental awareness. The quicker you take down a room of enemies, the more likely you are to move on to the next. Knocking an enemy down by slamming the door, grabbing a melee weapon, and pummeling him while he is on the ground are regular acts of aggression in Hotline. There are plenty of guns, but firing one will summon most enemies in a level — and they have plenty of guns, too. In some cases, you’ll need to go in guns-blazing but it’s not always the most effective approach.

Hotline doesn’t have the gentlest learning curve. Knowing when to swing a golf club and figuring out which doors you can blast through with a shotgun will take time. The game can be defined as brutal in more ways than one. There is no difficulty option and you’ll often find yourself stuck, as you try to figure out how to approach a punishing level. Dogs can’t be punched, big guys take more than one shot, and enemies can see you through windows: Finding your way through these constant obstacles gives Hotline almost puzzle game-like qualities and keeps combat mentally engaging.

Narrative and mechanics share the spotlight equally. Each level starts with a new week where you receive a new phone call, directing you to the next assignment. Once you clear out an area, you’ll head over to a pizza joint, bar, or video store for a brief story segment. Your actions are rated at the end of each chapter through killings, boldness, combos, time, flexibility (never score above a zero in this category), and mobility. The game never explains its system, but you’ll want to learn it to the best of your ability since doing well unlocks new weapons. You’ll also want to keep an eye out for masks which you can equip before a mission for perks. These perks range from starting off with a certain weapon to turning dogs into passive enemies. For whatever reason, you can’t change masks at the start which can be very frustrating when you choose one not fit for the current mission or, even worse, when you choose a novelty mask without having a clear understanding of its effects (such as, making the screen look like a Virtual Boy). 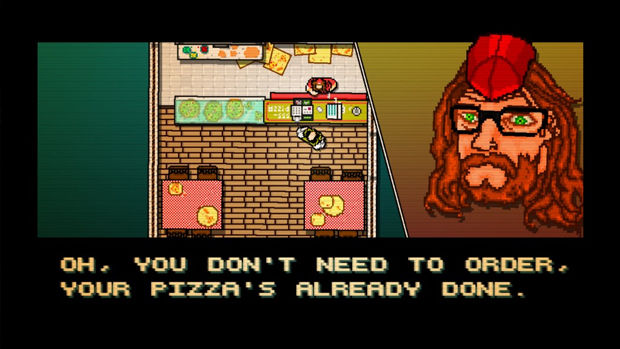 I had no intention of playing this game in one night. It just kind of happened. Hotline is a game that will beat you down, enthrall you, and make you beg for mercy, often all at the same time. Brilliance is abound in Hotline. Its low-rent visuals could have been a disaster, but smart neon filters make it an oddly immersive and nauseating nightmare that you can’t easily walk away from. The soundtrack adds to the atmosphere, bordering on David Lynch and David Cronenberg fandom with a dash of ‘80s cool (think Drive). VHS shops and a sweet DeLorean are there to remind you this is 1989.

Back to the beating you down thing: Hotline Miami is 2012’s damaged gem. It’s an addictive, fun, and clever game but Goddarn if it couldn’t have used another month in development. Many if, not all, of its systems lack a layer of polish that is to be expected for a retail game. For example, its save system is a mess. Not only does the game not save checkpoints within chapters, upon leaving the game, it also occasionally will not even save when you start a new level. I had to replay an entire level as a result, which wouldn’t have been so bad if it weren’t the worst level in the game (and maybe the entire year — it was a stealth level …) I was right to play through Hotline in one sitting, because I regretted every time I exited the program.

Hotline’s controls could also have used some more work, as well. Walking with the WASD-keys and looking with the mouse feels okay but there should have been a sensitivity option for aiming. Since you’ll be dealing with large areas, you’ll need to hold down Shift in order to look down a hallway. I’m baffled that the game restricts your view, yet offers a mask that increases your eyesight. This design decision often cuts into the playability of the game. The game wants you to be cautious, but how can you be cautious if you don’t even know what’s around the corner? Being able to see the entire map should have been the default option, not a bonus. Thankfully, restarting from a checkpoint happens in a flash, making for some painful stop-start sessions that bring back repressed memories of Super Meat Boy. 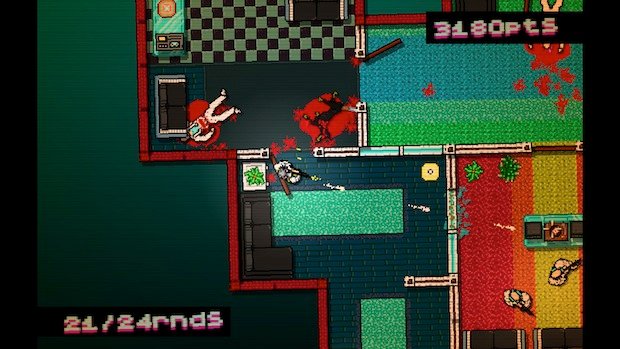 I blew through Hotline in four or five hours, occasionally managing to regain my breath and sanity in between intense firefights. I probably would have got through it faster if not for the misguided boss fights that act as the game’s biggest offender. These poorly designed sequences often are only solved in one way which goes against the freedom of play that the rest of the game promotes. Even worse, these fights are brutal and awkward. One has an enemy throwing Molotov cocktails that start fires that never go away. Yet, you need to fight against numerous enemies in a tiny office space. Yeah, good luck with that.

The game’s AI is dumb as rocks but it suits the pacing and style of combat. Yet, one has to wonder why enemies can’t hear their comrade’s shotgun fire or why they continue to sit on a couch after you blew their friend’s head off. Maybe it’s best to not think about these things, as they are the least of Hotline’s problems and contribute to the bizarre world the game creates. You’ll be grateful of the AI’s quirks once the difficulty ramps up. You’ll savor every cheap kill you can get, even if it means repeatedly swinging a door to knock down 5+ guys. 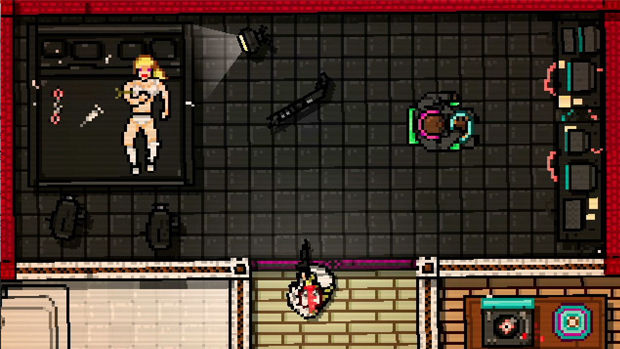 Hotline is a confident and addictive shooter that stands out among releases this year, even though its flaws bog it down. It can be sickening at times and brutal at others, but it all builds up toward a commentary on games and pointless violence. The narrative’s downward spiral of violence, insanity, and crime will not light up your day but it’s very engaging in its own way. Hotline contains a surprisingly good plot full of mysteries and dark twists that players won’t see coming. The morbid nature of the game won’t be to everyone’s taste, but it’s a refreshing story for a videogame.

In a medium where taking a life means so little, Hotline Miami has a way of making each death feel significant. Each step toward a higher score is one further away from your character’s sanity. Picking up the gun comes naturally, and Hotline Miami wants to explore why. The game may tease you, exhaust you, and possibly destroy you with its boss encounters and awful forced stealth level, but it all builds toward a focused, dark vision unlike much else in the medium.