Clap Hanz’ Hot Shots Golf series and Sony game system launches go hand in hand, and for most gamers they serve as a nice launch title, holding them over until something bigger and better comes along. But, if you’re a fellow golf game freak, Hot Shots Golf: World Invitational is your ‘bigger and better’ game. In fact, as far as golf games go, this one is probably the best.

Hot Shots Golf: World Invitational might come on a tiny little cartridge, but it’s a huge game. There’s a large singe-player portion with challenge and stroke modes, Ad Hoc play for up to eight players, Infrastructure play for 30 people, and a really great Internet mode that puts you up against everyone else in the world on the same course. With tons of courses, characters, items, and play style options, this launch game is likely to stay in your Vita for a very long time. If you’re anything like me, I’d recommend getting the digital version to always have it at the ready. 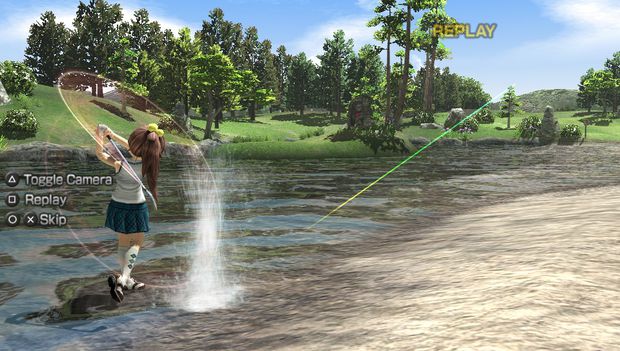 The game’s main single-player mode takes you through the ranks from rookie to pro, putting you through various 9- and 18-hole course challenges to earn stars, which are then used to unlock head-to-head duels in a sort of boss battle. Beating these silly golfers will let players graduate to the next player level, opening up more difficult courses and opponents. The game starts you off easy, but quickly piles on the difficulty, working you up to courses where putting the ball in the hole is so difficult that it will have you stress-testing the integrity of your Vita’s build. Some of the course designs are just cruel. Succeeding in the later levels (and in online matches) requires patience. Fortunately, HSG:WI gives you all the tools you’ll need to make a proper shot — you’ll just need to be sure to use them properly.

I’m addicted to the daily tournaments, which have you going up against everyone else online to try to top the leaderboards. Given that the gameplay is asynchronous, the Vita’s 3G connection can be used for this mode. Each day the game’s servers generate three course challenges, and you’ll only get a single chance at each to earn your best score. Completing one of these 9- or 18-hole challenges will give you your round score, and then rank you out of everyone that has played that same course on that day. Beyond this, your overall performance on these daily tournaments is tracked in a bar graph, and you’re also given an overall world rank. It’s fun to see where you stand compared to everyone else, and even more fun to try topping a daily board. 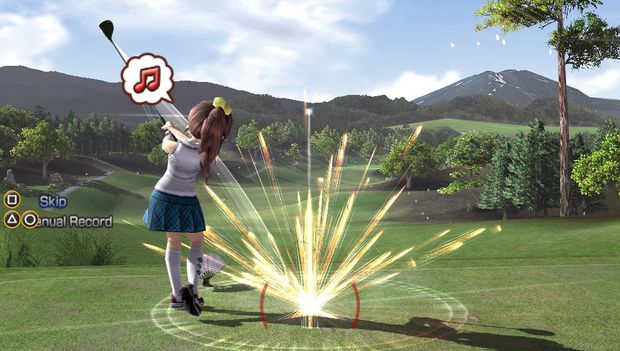 On the surface, not much has changed in the gameplay department. The swing mechanic is still based around the three-point method the series has been using for years where the first button press starts the swing, the next sets the power of your swing, and the last determines the accuracy. World Invitational lets you pick which swing meter you’d like to use from five available choices, ranging from the classic horizontal bar to the new bar-less one from PS3 game Hot Shots Golf: Out of Bounds. It’s nice to have choices, but you’ll have to play the game for a bit to unlock all of them.

The change here is that the Vita’s front and back touch panels and gyro sensors supplement the standard button control with options to do things like position your character or the camera. One of the best features lets you drag your finger along the back touch panel from the player to the hole to see real-time measurements for distance and incline. Other features are more gimmicky; tilting the system around to pan the camera and view surroundings is neat once or twice, but isn’t really useful for gameplay purposes. 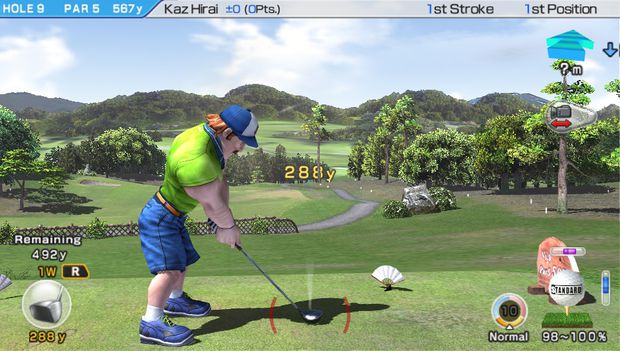 This game is packed with unlockable items, and through play and earned points from victories, you can spend to unlock characters, clubs, and balls to directly impact gameplay. The optional costumes for characters, caddies, and music selections are just as rewarding to spend your hard-earned points on. Clubs and balls can even be leveled up, further increasing their benefits.

Hot Shots Golf: World Invitational is a great-looking game, sporting a level of high-resolution polish that you’d expect from a full console title. Its nicely animated characters and highly detailed backdrops puts it on par with its PS3 predecessor as far as looks go. It’s too bad that the dull, chime-y music will have you zoned out after only a few holes. The strange quotes and noises from the golfers and caddies will snap you out if it, though. One of the female characters’ aroused moans happen so often that you can’t help but giggle. 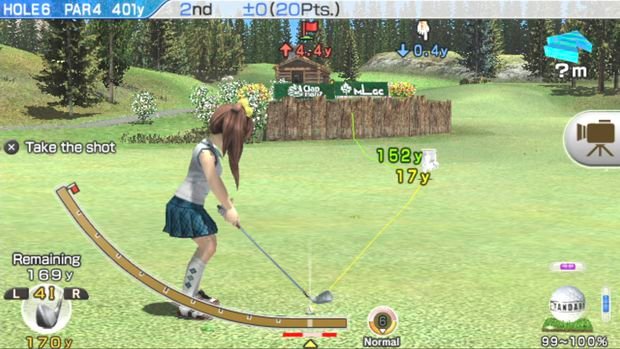 World Invitational continues that tradition of a really nice blend of arcade-ish accessibility and sim seriousness. If you want to kick back and relax, fine — but you can also dig in, get deep with strategy and complex swing tricks, and feel rewarded when you master them all. With its massive array of play options, courses, unlockables, and online challenges, not to mention its portability and always-on 3G connectivity, this is easily the biggest and best Hot Shots Golf game yet.