Virtual reality is one of those things that you kind of accept is going to be a slightly handcuffed experience.

The nature of the beast dictates that what you gain in immersion and wow-factor you lose in control and full autonomy over movement, mostly because one way or another you’re tethered either via cables or camera facing one direction giving the illusion of a freedom. Certain games, like Resident Evil 7, absolutely stand out as anomalies, but for the most part you just know concessions must be made in order to make the whole thing tick.

But that doesn’t mean you can’t still have a damned fun game that knows the medium’s weaknesses and plays to its strengths. 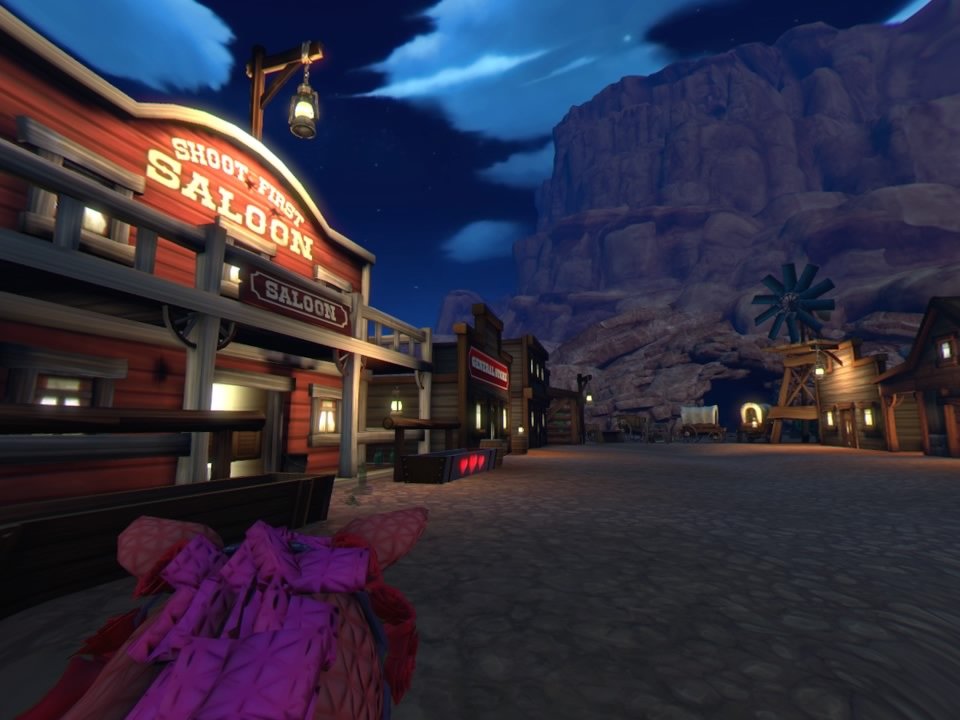 Hopalong: The Badlands is an arcade shooter at heart — which is the highest compliment I think I can pay it. As the sheriff of the town, you’re tasked with hunting down The Dynamite Gang, a group of brigands intent on doing something or another that you don’t like for some reason involving you being good and them being bad. If you’re here for a story, I’m afraid you’ll be let down as this is as bare-bones Western as you can get. The law is on your side, and you’ve gotta shoot all the bandits in order to bring law back into town. That’s it, and it doesn’t need anything else.

What the game lacks in story, it makes up for everywhere else. Simply put, this is a classic arcade shooter you could find a dozen copies of at Aladdin’s Castle in the late 90s distilled into a home VR experience. You’ll ride, shoot, use special powers, and not much else as you make your way from desert town to cave back to desert town. If that sounds shallow, it’s because it is — it knows what’s fun about the genre and tells the rest to fuck off in favor of keeping the pace moving right along.

I don’t need to explain how you’ll point at things and shoot them with your Move controllers. I do need to explain the locomotion in this game. You’ll use your dominant hand to shoot (an option when you first boot up the game) and use your other hand entirely for movement. The game features an incredibly intuitive movement system: Your left (for most of us) hand acts as the rein over your horse, and you’ll hold down the trigger and bob your hand up and down, simulating the movement of a horse in order to move forward or backward. The X and O button on the Move controller rotate the camera in 45 degree increments in either direction to allow you to turn as you ride, giving a pretty close approximation to full movement. It takes a bit of getting used to, but once you get the hang of it it’s an incredibly clever way of handling movement in the VR space.

Normally aesthetics would be its own category later, but I have to specifically mention how your horse isn’t a real horse, but instead a stick horse that you more or less pretend to ride. In fact, all enemies in the game also ride variations of the stick horse which does nothing but add to the whimsical arcade nature of the game. I love it to death. It’s not super serious, and it doesn’t take itself that way; you’ll shoot dynamite back at stick horse-riding baddies as they shout, “Dern it!” as if the game is winking and nodding back at you. It’s part Muppets and part Three Stooges, and hits that perfect balance of tone and subject matter. 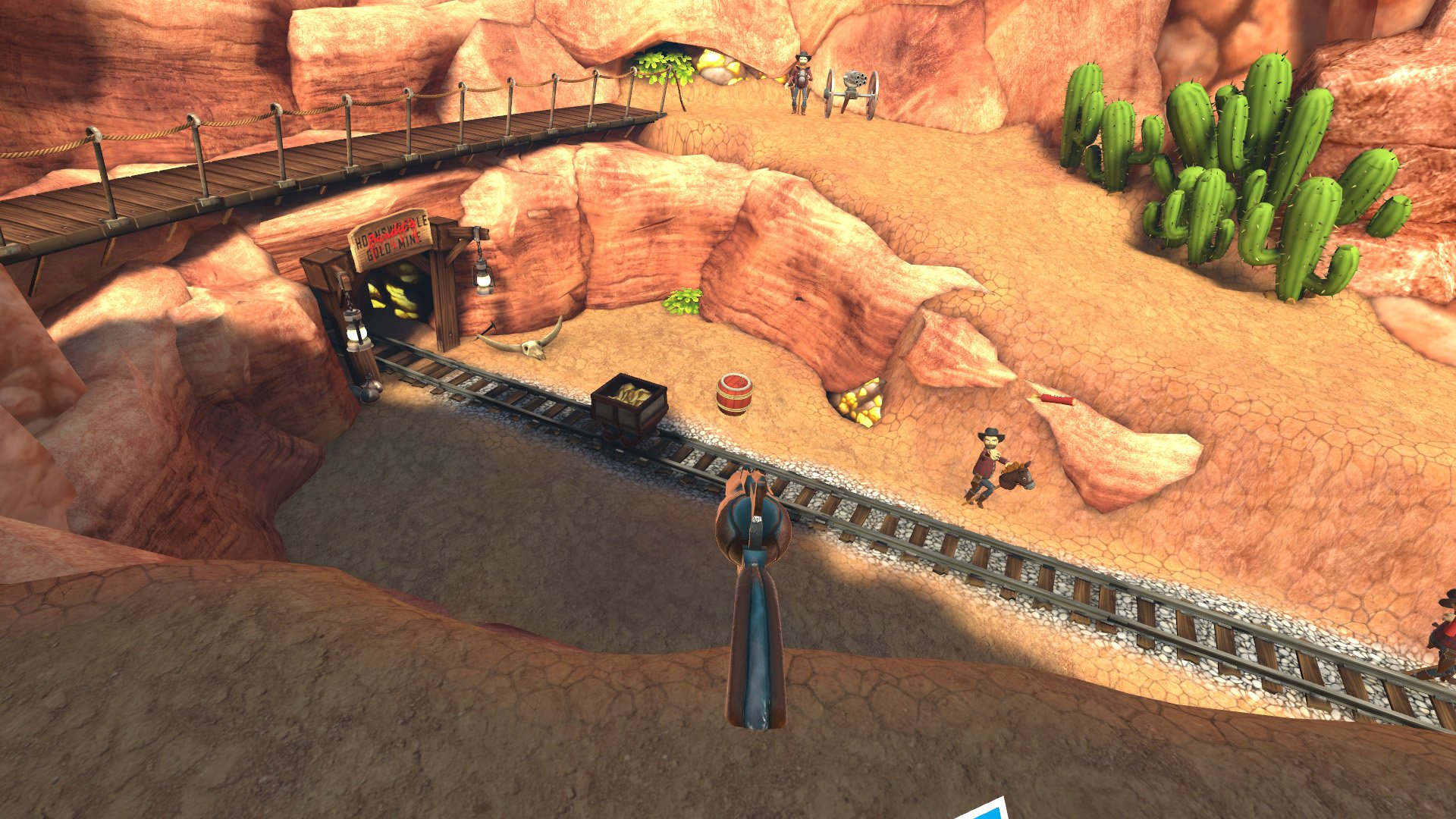 The desert landscape gets the job done with its canyons and cacti, and overall the game looks really great in motion. The enemies are just robotic enough to not venture into uncanny valley, and environments pop with cartoony fun despite the largely tan scenery. Some of the cave interiors are a bit too dark and one level in particular is a chore due to its labyrinthine layout of samey walls and rocks, but there’s not much to complain about as far as visuals go.

In fact, the biggest complaint I have about the game is it’s sometimes too arcadey at times. There are early sections when you’re still learning the controls that are especially tough if you don’t know exactly where the enemies are coming from, leading to some memorization of parts and placements to survive. Inversely, once you get a handle on the controls you’ll be zipping and dodging like a pro, leading to some parts being a breeze. The difficulty never quite finds that balance despite the game doing its best to ramp up with bigger and tougher enemies as you go along. 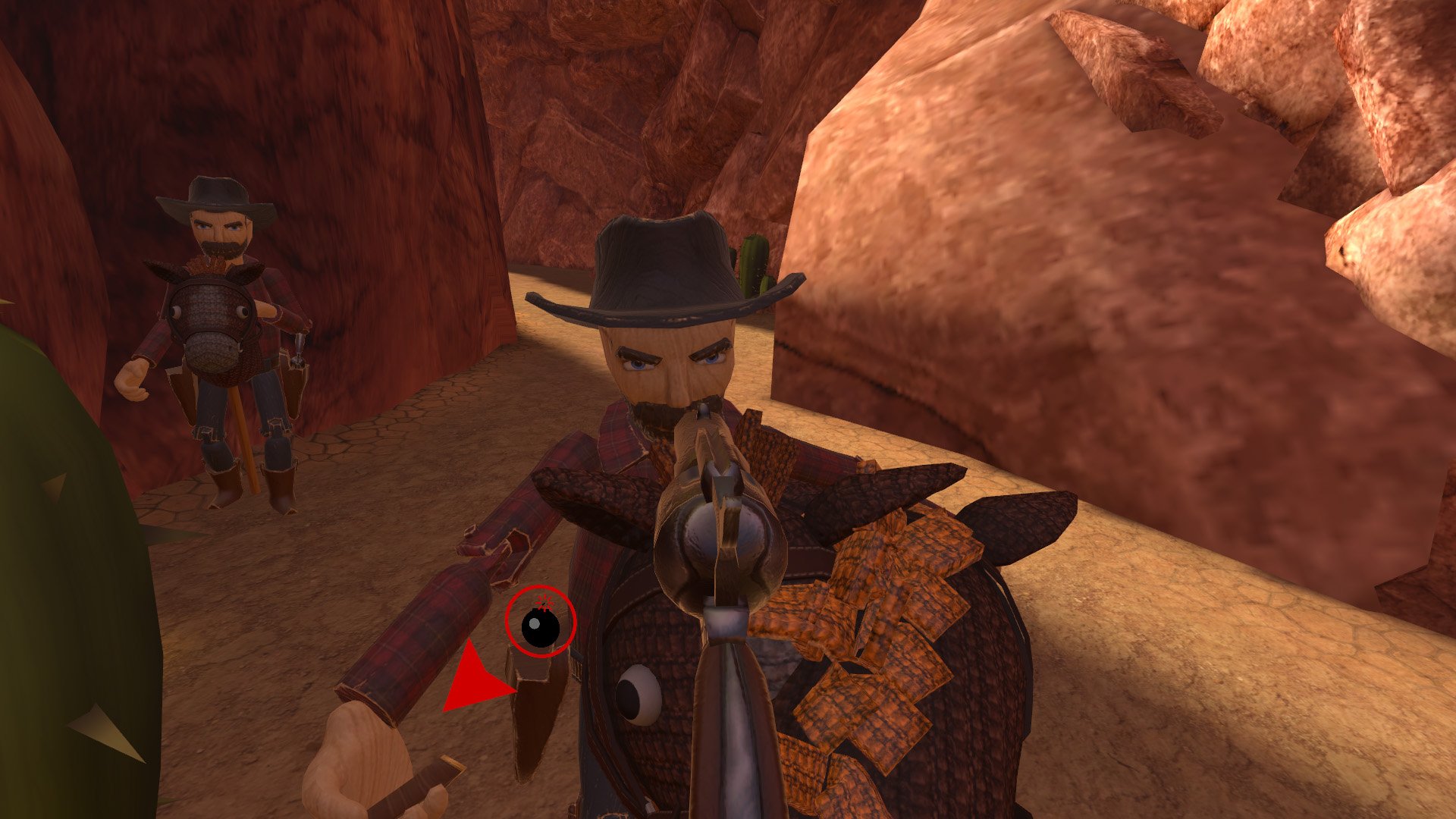 There are a few glitches here and there and the final level is more frustrating than it probably needs to be, but when you’re speeding by a gang of dynamite-wielding hooligans shooting shotguns and smacking them with a pickaxe, you’ll forget all about the minor small annoyances. Hopalong: The Badlands is a fun and intuitive arcade shooter that lasts just long enough for you to feel like you’ve truly mastered its controls, but not too long to overstay its welcome.

And you ride a stick horse! Did I mention how damn adorable that is?