It’s a mere 16 years into our future. The nuclear-armed Greater Korean Republic has crumbled the infrastructure of the United States with a catastrophic EMP strike. The Koreans have brought the war to our doorstep, imprisoning our people and tearing down our once-great country.

This nightmarish “what if?” scenario is Kaos Studios’ version of a “plausible near-future world,” as depicted in Homefront. Buy into this vision of our country’s potential fate, and you’re looking at the setup for a gripping and emotional tale.

Unfortunately, a fascinating premise can only get you so far, and the pieces of Homefront’s puzzle don’t look quite so promising when they’re pushed into place. 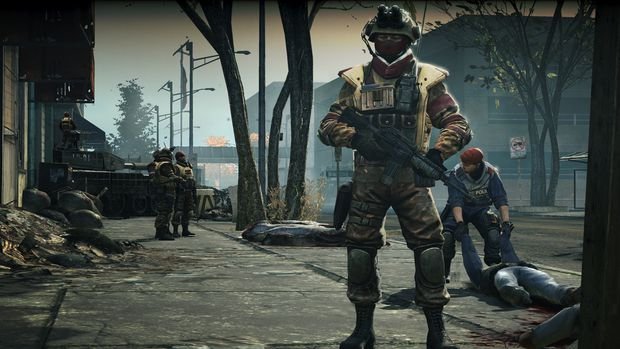 If you’re not a fan of first-person shooters, you’d probably say that the genre hasn’t come very far over the past five years. From an outsider’s perspective, that point of view seems valid: many of the games look alike, seemingly having you doing the same things with bigger guns and flashier visuals. The truth is, developers have made great strides in these experiences, from storytelling to subtle tweaks in core mechanics.

Kaos Studios, it seems, has slept on all of this: Homefront feels like a game yanked from a time capsule, one buried around the time when people were trading in their tank-like Xbox consoles for the sleeker, more powerful Xbox 360.

Visually, the game can’t stand toe-to-toe with today’s most popular triple-A shooters, although it tries to make up for that with a chilling ambiance. Battling through American suburbs and city streets can be a tense, hair-raising experience. Plumes of smoke rise from homes and business torn apart by war, and iconic US symbols such as American flags and recognizable commercial logos lie burnt and tattered. But it’s hard to turn a blind eye to the game’s dated visuals, including muddy textures and a color palette that’s so overwhelmed by shades of greens and browns that enemies and the environment are sometimes indistinguishable from one another. Characters’ faces look dull and lifeless, whether they’re shouting orders or making vain attempts to connect with the player through dialogue. 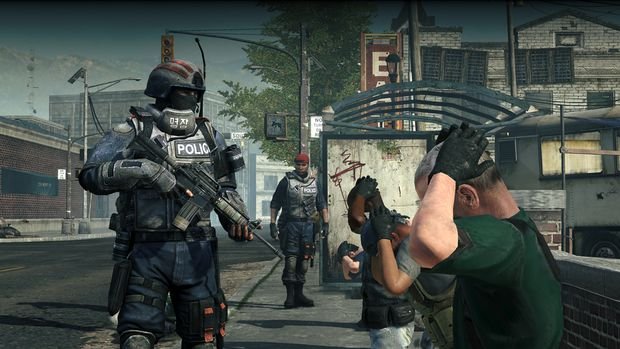 As far as its shooting mechanics go, Homefront plays it safe through and through. It manages to skate by on adequacy while introducing nothing new for players to be truly excited about. If you’re looking for a game where you follow an NPC around for six missions, taking down enemies like you’re running through a shooting gallery, then Homefront is right up your alley. I don’t mean to imply that that’s necessarily bad, either, if it’s what you want. The game holds up well enough as an average shooter, so it certainly has that going for it. To Homefront’s credit, and without giving anything away, the campaign’s finale is easily a collection of the game’s most impressive moments. But given that you can breeze through the story in under five hours, it’s certainly a case of “too little, too late.”

Numerous other problems mar the experience. Take, for instance, the scripting of the resistance team you’re fighting alongside. Do you enjoy standing in front of a door, doing absolutely nothing in complete silence for upwards of 30 seconds, while you wait for your squad to open it? How about getting stuck on an invisible wall as you try to crawl underneath a fence, only to realize you need to stand up and move aside so your partners can go first? This kind of sloppy design feels less like something you’d see in a triple-A game from a major publisher such as THQ, and more like something you’d expect from a budget PlayStation 2 title. It’s not only frustrating for the player (“Open the %#@&ing door already, guy!”); it completely breaks any sense that the world you’re fighting for is real.

Technical issues aren’t the only thing holding back the campaign, either. There’s been a lot of talk about how Apocalypse Now and Red Dawn co-writer John Milius worked on the script. That sounds impressive on paper, but in execution, you’d be hard-pressed to tell that a veteran author was involved at all.

To the game’s credit, there’s promise out of the gate. In the first moments of the game, you’ll see helpless Americans beaten by merciless Korean soldiers, and a mother and father ruthlessly executed in front of their sobbing adolescent child. The foundation of the narrative holds promise, and the idea that no punches are being pulled indicates Homefront could be a somber and even emotional action title. But the moment you get a gun in your hand, it all falls apart. 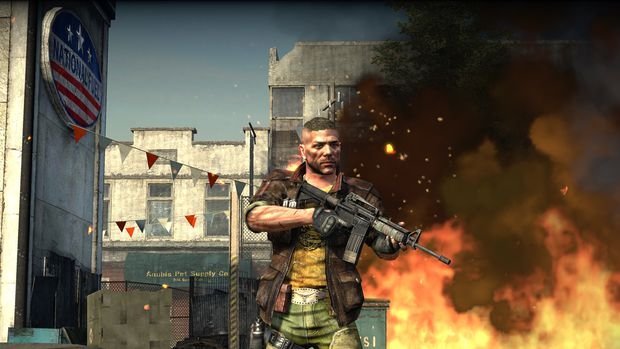 While the idea of being the catalyst for what will turn the tide of war is compelling, your character and those around him manage to be wooden throwaways. You’re barely given a single reason to care about the game’s protagonist, and your NPC sidekicks are aggravatingly trite when they’re not getting in your way.  If you’re expecting Homefront to be bursting with thoughtful dialogue and challenging narrative situations, prepare to be disappointed. The gruff, foul-mouthed Connor, whom you’ll be forced to follow around in every mission, is the worst offender. Sample dialogue: “Get the fuck down!”; “Get to cover!”; “Now that’s what I call Korean barbecue!”; and my personal favorite, “Enemies in the Hooters!”

For all of the campaign’s missteps and missed opportunities, there is a silver lining for Homefront: its multiplayer. Perhaps I jumped the gun when I suggested that Kaos was napping while the FPS genre evolved; it was simply eyeing its multiplayer competition.

At its heart is its “Battle Points” system, an in-game currency that rewards players for kills, and completing various objectives and challenges. Using points, you can purchase vehicles, upgrade items, and do more to give you an edge. (Getting your hands on the game’s assault drones — battery-powered, remote-controlled RC cars and helicopters of doom, is a particular highlight.) Points are doled out in such a way that you’re not simply pushed to kill, kill, kill. Instead, strategic thinking is rewarded, as is helping your teammates or guarding territory. It’s not a completely new idea, but it’s well-implemented in Homefront, enough so that it’s certainly worth mentioning. 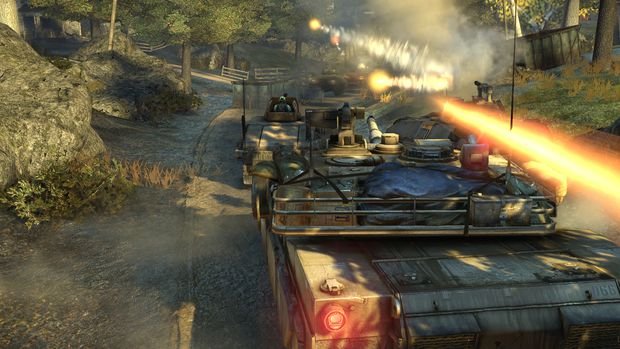 Not to be outdone by Call of Duty, Kaos has also implemented the now-expected leveling up and perks system. With over 70 ranks and close to 20 (if not more that I didn’t see) abilities, there’s a lot of content to both be explored and unlocked.

Game modes consist of the usual Team Deathmatch modes, along with “Ground Control,” which plays out similarly to the “Frontlines” multiplayer mode in Kaos’ previous shooter of the same name, with teams capturing and holding points on a map. While there are a meager seven maps that ship on the game disc, they’re all massive and well-designed around game objectives. Fans of heavy artillery will also be pleased to find an abundance of weaponry at your disposal; an American’s right to bear arms is rarely as sated as it is in Homefront, that’s for sure.

In many ways, Homefront’s multiplayer modes feel like an evolution of what Kaos offered with Frontlines. For fans of the 2008 shooter, this is exactly the game you’re looking for. It manages to stay fresh and varied with its wide variety of abilities and upgrades, and vast battlefields. Still, it’s not quite as polished or full-featured as any of the recent Call of Duty games, which may be its downfall. Homefront’s multiplayer will ultimately only be as strong as the community that supports it; a few hundred Black Ops and Battlefield game invites will be hard to ignore. 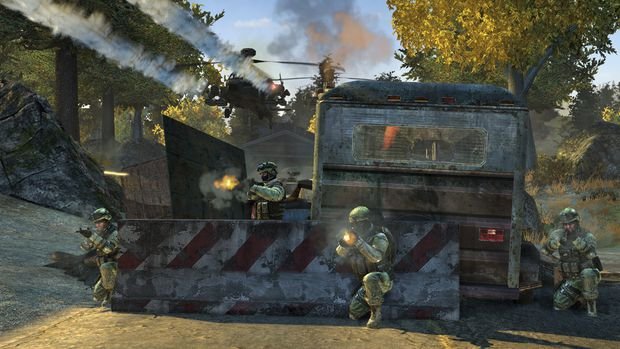 There are some games that feel like their multiplayer experience was tacked on, a simple matter of getting on the disc and the back of the box to sell “a few” extra copies. With Homefront, it feels like the opposite is true: we’ve wound up with a solid multiplayer experience, matched with a sloppy and under-developed campaign.

If you’re looking for the total package, Homefront doesn’t even come close. Gamers wanting a fulfilling story-driven single-player campaign should take the next bus to Playing Half-Life 2 Again Town. But fans of competitive multiplayer should at least give Kaos’ latest a look, even if it’s unlikely to replace their shooter of choice.