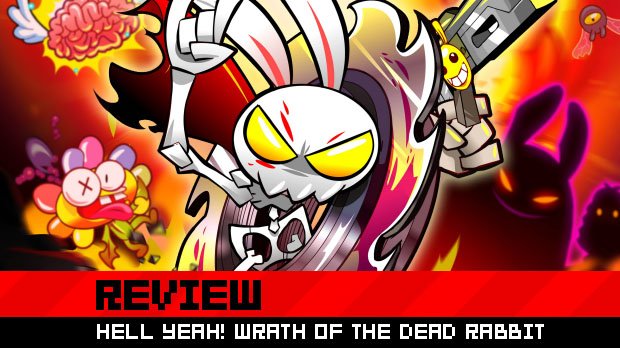 Every now and then, a game comes along that can only be described as special. It features ideas we’ve never seen before or employs old ideas in fresh new ways. It’s weird and wonderful, stuffed with humor or insane concepts. There’s nothing quite like it, and it manages to turn heads.

Then there’s the game that tries to be special but falls short of the mark. It knows what it needs to do in order to become the next memorable oddity, but it doesn’t quite know how to go about doing such things. The result is a game that looks, sounds, and moves like a game from Suda51 or Swery65 but lacks the genuine heart or intelligence required to pull it off successfully.

Hell Yeah! Wrath of the Dead Rabbit is the latter. 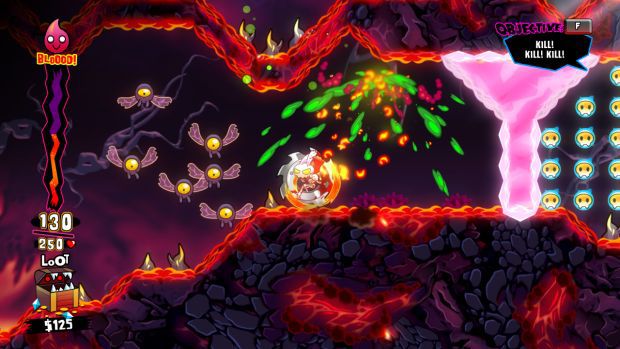 Ash is the Prince of Hell, a skeletal rabbit who has just taken over the reins following the death of his father. However, his status as the most feared being in the realm is threatened by incriminating photos of him playing naked in the bath. His only option is to assassinate the 100 monsters that have seen the pictures, traveling through the bowels of Hades to take out a small army of increasingly weird freaks.

An action-platformer with light “Metroidvania” elements, Hell Yeah! gives players control of Ash and a big circular saw that acts as both his primary weapon and mode of transportation. The death-wheel can bore through solid rock, slice monsters to pieces, and be fitted with a range of projectile weapons including missile launchers, machine guns, flamethrowers, and holy water pistols. Thus armed, Ash’s task is simple — navigate a series of themed zones and take out the 100 nefarious monsters lurking within by any means possible.

The game starts out fairly simply. You find a monster then drill into it until its health is depleted. To finish off a monster, the player must successfully perform a short challenge or otherwise lose some health and be forced to fight the monster again (albeit with only a sliver of its life left). The challenges are basically WarioWare-style microgames — incredibly short tasks that involve pressing one or two buttons to complete wacky objectives. For example, one might need to move a trampoline to keep ears of corn in the air, or you must hold and release a button to steal honey from a bee while its back is turned. When the microgame is successfully passed, Ash will annihilate the monster with a ludicrous finisher that is almost always gory and bloodsoaked.

Monsters soon stop being easy to dispose of, however, and later require puzzle-solving or deft tactics to defeat. Some creatures cannot be drilled and must be shot with one of the projectile weapons. More complicated opponents are totally inaccessible and can only be beaten by solving riddles or using special vehicles. There are moments where Ash is forced out of his drill, unable to attack, and forced to jump his vulnerable body around the map. Some very clever ideas involve playing around with the interface, making players pull the camera as far as possible to fulfill subtle objectives or use the character customization options to pull off a disguise. Hell Yeah! isn’t afraid to make the player do unusual things and clearly has a lot of fun by bending its own rules.

Unfortunately, the flagrantly ignored rules work against the player more often than not. For example, monsters cannot be harmed if they’re off-camera, through they can happily deal damage to you with their own projectiles. Most enemies can also shoot or even move through walls, giving them a number of advantages over Ash that can and will be exploited to an irritating degree. It’s especially chafing with fast-moving monsters that can hurl a veritable truckload of bullets in your general direction while regularly staying off the screen to avoid any retaliatory fire. Each monster is, by itself, pretty easy to dispatch, but that doesn’t stop some of them being a hassle to deal with. 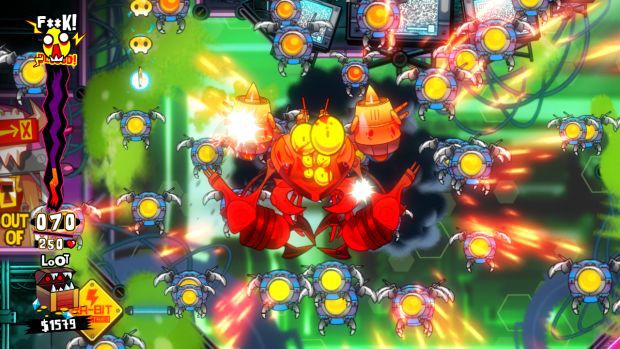 The game’s controls are a bit problematic as well. Ash’s drill has its own sense of inertia, failing to stop with precision and frequently sticking to walls. It’s tricky to get used to, which is troublesome during moments that call for intricate platforming. The “floaty” nature of the vehicle’s jumps are also a real pain for avoiding the scads of enemy fire that frequently come Ash’s way.

Outside of the main game, players are invited to visit the Island, which is populated by all the monsters Ash has killed in the main quest, all of which can be set to work in a number of areas — mining for money, finding items, or earning health pickups. Ash is encouraged to regularly visit in order to delegate tasks and turn unhappy creatures into healthy workers by sending them on trips to the beach or tower. Although it’s an intriguing idea, the inability to visit the Island without first quitting the main game means it’s inconvenient to use and will likely be forgotten. Rewards are thus infrequent, and there’s not a lot to do on the Island outside of clicking on a few things, so it really feels like a lot of potential with no real follow-through. 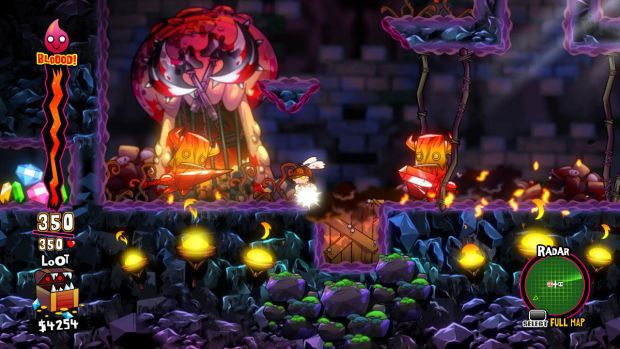 Scattered through each zone are shops in which Ash can spend money collected in the world. Here, players can acquire weapons, upgrade their firepower, or get new hats and drills for a cosmetic change. There’s quite a lot of cool stuff to buy, both in terms of usefulness and simple personal amusement. Finding a shop is always exciting, and money is given generously enough that the player can usually obtain whatever’s desired. In any case, you can wear an arse for a head and ride around in a duck-themed rubber ring, so that’s got to count for something.

For the most part, Hell Yeah! is a relatively inoffensive little platformer. Its premise and design are both quite appealing, and there are some genuinely smart ideas. There’s nothing so impressive that it places above tighter, more focused platformers like Limbo or Braid, but it’s not a bad game at all. Its flaws, while aggravating, can be gotten used to, and there are even a few rather funny moments that are worth discovering. 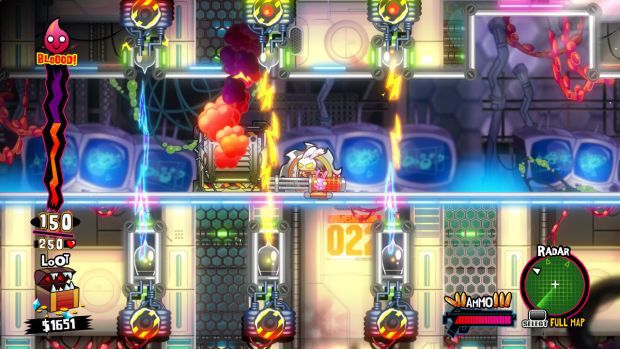 Unfortunately, Wrath of the Dead Rabbit seems to think it’s a lot cleverer than it actually is. Like a child telling the same joke twice and expecting equal laughs for each, Hell Yeah! believes that if an idea’s good once, it’s good several times after. Before long, the puzzles, microgames, finishing moves, and jokes are repeated not once, not twice, but many times, until anything that was fresh or inventive grows stale and boring. At first, the cruel execution animations delighted me with their over-the-top cartoon silliness, but long before I’d slaughtered the final monster, I was praying for a button to skip through them.

The same can also be said of the dialog sections, which are painfully unfunny (sometimes unintelligible thanks to what I assume is poor localization), cannot be quickly skipped through, and are often placed before checkpoints so that death means scrolling through the text multiple times. In fact, many of the checkpoint placements seem designed to waste time — occurring before large areas full of items to collect or cutscenes so that death forces the player to repeat tracts of content. While checkpoints are liberal, they’re placed in just the right places to slap the player across the face. 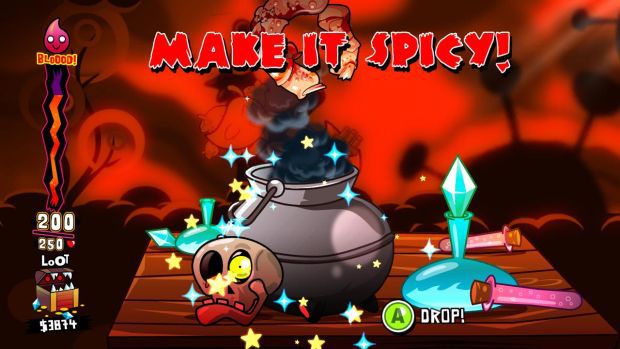 It’s sad that Hell Yeah! is so reliant on repetition and has to break its own rules to be challenging, because there really are some fantastic moments. An entire level set in a cute and colorful world of rainbows is beautiful, and there’s a great casino section full of bouncing bumpers and slot machines, reminiscent of old-school Sonic the Hedgehog stages. At times, Hell Yeah! causes the player to raise an eyebrow and tip the hat in respect, only to take that respect and do something unseemly with it.

By far the best thing going for Dead Rabbit is its presentation. The extravagant blend of color is gorgeous, the environments are varied, and the 100 monsters each have a crazy look that bursts with vibrant detail. In many ways, the graphics remind me of 90s collectible cards and toys — each monster has the kind of over-the-top, radically colorful style that adorned POGs, Trash Bag Bunch figures, and other amusingly gaudy childhood products. The soundtrack is also uncommonly good, with music that fits each zone to a tee and a few standout tracks that are worth listening to outside of the game. If one thing can be said for Hell Yeah!, it’s that it is one of the most aesthetically appealing games released in a long while. 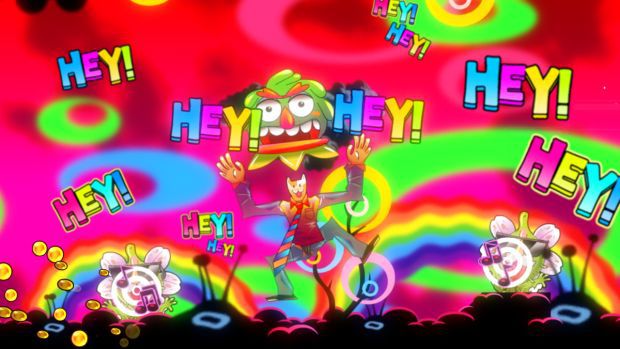 Aesthetics, however, can only carry a game so far, and Hell Yeah! doesn’t get far before it slides into drowsiness. It’s a solid little platformer in many regards, but those playing need to be aware that they run the risk of growing bored and agitated by the recapitulated ideas and unsavory controls. Every time the game does something brilliant, it only serves as a reminder that the overall product just isn’t very remarkable, no matter how awesome it looks or how much fun the music may be.

Like so many other games that have gone for the “weird and wonderful” dynamic, Hell Yeah! Wrath of the Dead Rabbit is certainly weird, but it’s just not all that wonderful.

Filed under... #Hell Yeah! Wrath of the Dead Rabbit#PSN#Sega