From my hearth and from my hand, why don’t people understand, my creation

Blizzard’s Hearthstone is one of the company’s more unusual creations. A digital representation of a physical card game, based on a venerable MMORPG, itself based on a real-time-strategy game (based on the Warhammer universe, but we don’t talk about that). Sanding the edges off of Collectible Card Games (CCGs) like Magic: The Gathering proved to be a big hit, and many of Hearthstone‘s most ardent fans have probably never played any of the games that led to its creation.

All CCGs eventually need new expansions to keep the game from becoming stale, and Blizzard has reliably added about three every year since Hearthstone‘s inception in 2014. The newest expansion, The Boomsday Project, adds 135 cards as well as a new single-player campaign. But is that enough to elevate it above some of its predecessors? 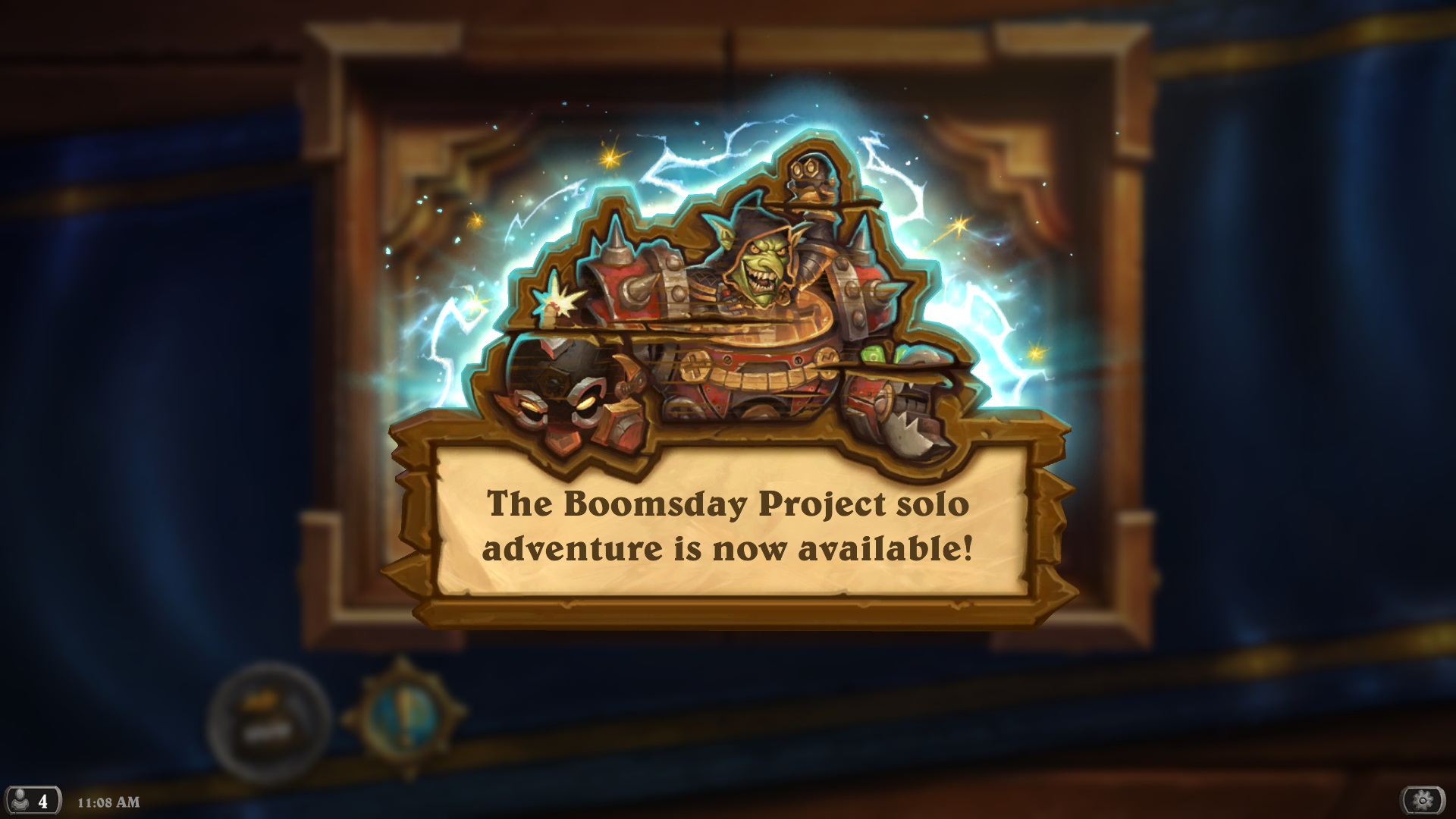 The Boomsday Project revisits several of the same concepts behind the Goblins vs. Gnomes expansion from 2014, with a focus on robots, unsafe science experiments, and the inevitable explosions that result from combining the two. The theme is a lot of fun, and the new mechanics have successfully shaken up the metagame to the point where a few decks aren’t dominating the leaderboards.

The main character here is the goblin robo-geneticist Dr. Boom, a mad scientist from Area 52 who’s never even heard of Latveria, thank you very much. His secret lab is the setting for this expansion, and the different fields of study his research teams are exploding exploring are the basis of the new single-player content called “The Puzzle Lab.“

Unlike the last two expansions, The Puzzle Lab doesn’t rely on building a deck or semi-random boss encounters. On the contrary, each encounter in the Lab gives you a very specific board state and hand of cards, removing randomness from the equation entirely. There are four types of puzzles, each with their own rules, but each must be solved in a single turn. You can reset the puzzle as much as you want with no penalty other than having to listen to the boss character’s canned responses every time you do so.

Puzzles start out simple but quickly ramp up to become quite devious, requiring precise board placement and specific timing on the interactions between cards. Fortunately there’s no time limit, so you can work out in your head what you’d like to do before you start throwing cards around. If you mess up or do something out of sequence it’s not too bad to reset and try again, so experimentation is encouraged. 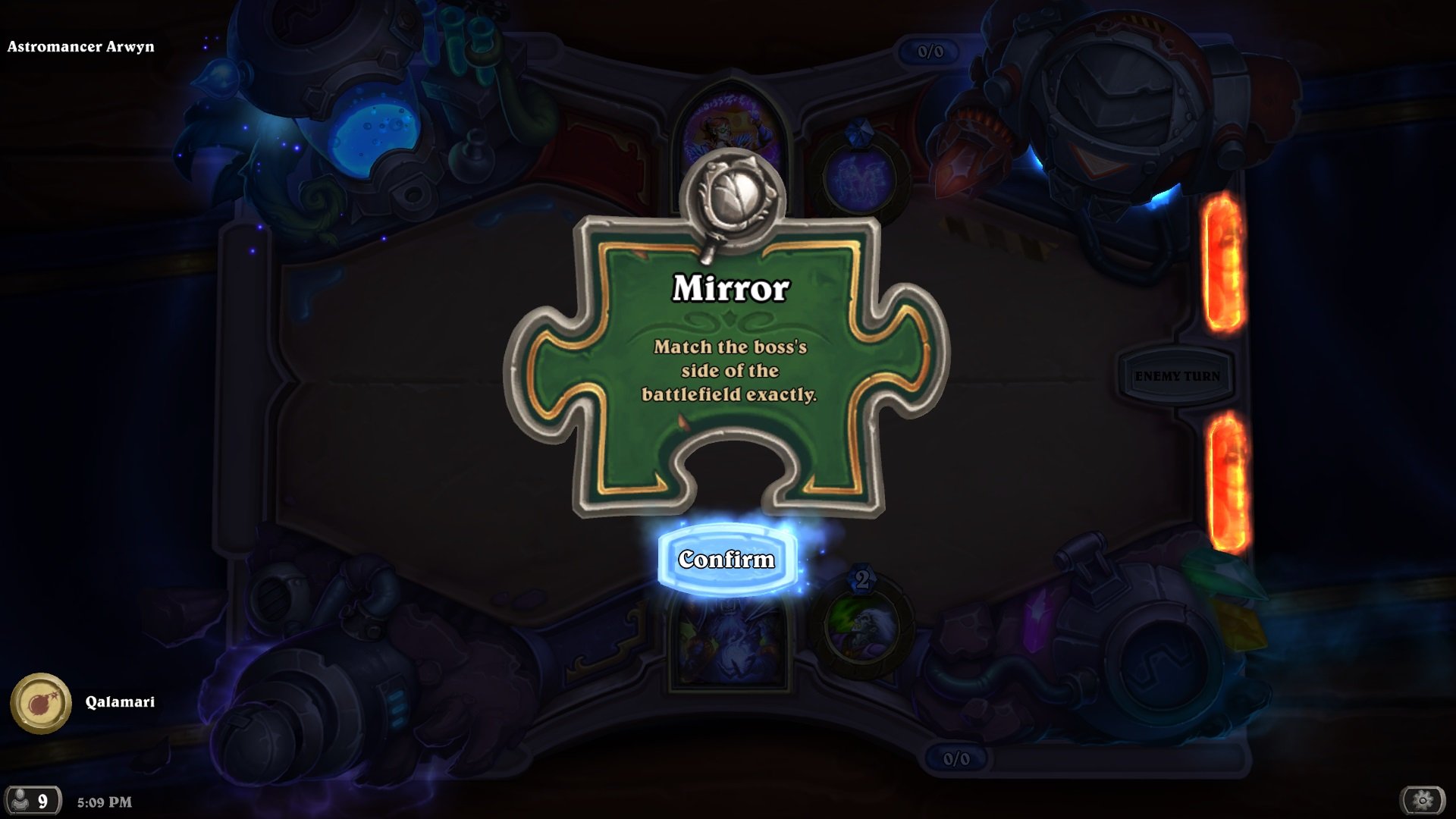 The Lethal Challenges are the most straightforward, asking you to figure out how to destroy the enemy hero in one turn. Board Clear is a little strange since you have to wipe out every minion including your own, and it can be tough to break the mindset of trading minions to your advantage at first. Survival puzzles are a little harder and make you heal to full from a very low life total. Finally, Mirror challenges task you with creating a symmetrical board state, with minions on both sides of the table in perfect balance with one another.

The puzzles require you to think differently about playing Hearthstone than you’re probably used to, frequently using destructive abilities and spells on your own minions. I had fun playing through the various challenges, though I was a little disappointed by some of the later ones. By the end, many of the puzzles rely on cards that don’t exist in the live game, like zero-mana spells that refresh your mana crystals or swap boards or hands with the opponent. I liked how the single-player challenges in Kobolds and Catacombs and The Witchwood could help you learn how to play the game, but the challenges in The Boomsday Project don’t really do that. It’s fun trying to figure out how to cause 999 damage in a single turn, but there’s no practical application for doing so since most of the cards you use to do it don’t really exist. 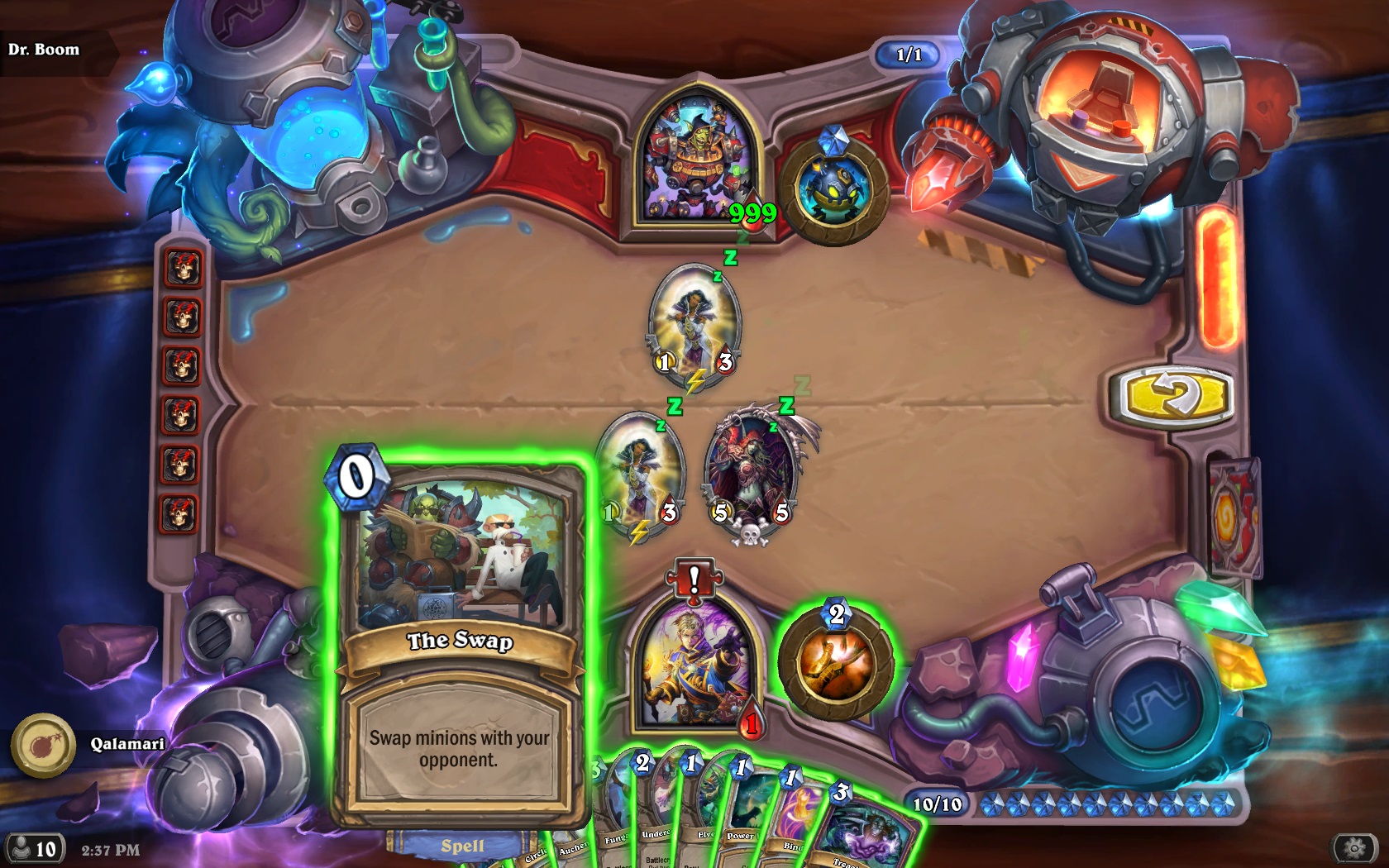 The other problem with The Puzzle Lab is the comparative lack of replay value. Each puzzle has one or at best a few possible solutions. If you just want to breeze through the content, you can easily look up a guide online and go through the motions. There isn’t much reason to return to the Lab once you’ve completed Dr. Boom’s challenges, and I can’t see myself coming back to any of them now that I’ve finished the lot.

I was also a little disappointed with the reward for completing the lab: nothing more than a card back I’ll probably never use. It’s not even good as a demonstration of bragging rights since anyone can look up a YouTube video and copy the sequence shown to earn the card back. I’ve said it before, but I’d much prefer the reward for the single-player content be something like a legendary card of your choice from the set rather than a cosmetic option. Ideally, I’d like to see a return to the more story-based expansions that granted everyone the same specific cards, but it doesn’t look like that’s ever going to happen again. 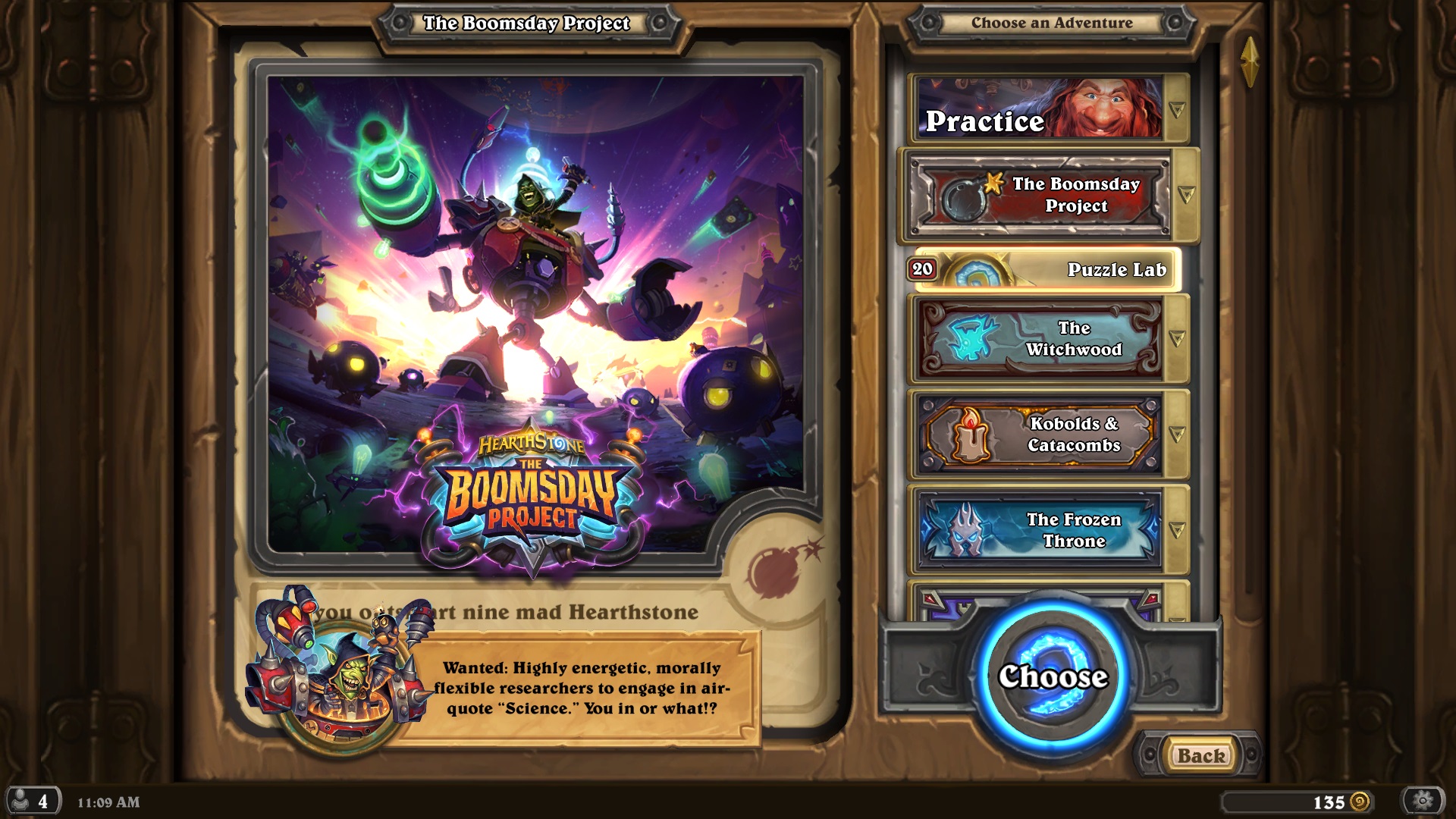 Moving on from the single player game, the multiplayer has changed a fair bit since The Boomsday Project launched. Priest and Hunter Deathrattle decks which take advantage of the Devilsaur Egg have become more popular, and there’s a new one-turn-kill deck for Priests that involves repeatedly summoning and destroying your own Test Subject. Cubelock and Shudderwock Shaman have thankfully fallen by the wayside, but Paladins have maintained their status, adding mechs to their aggro options in addition to the already deadly Murloc and Mooneater aggressive decks. One of the most interesting new deck types is Mech Warrior, anchored by Dr. Boom’s hero replacement card. The hero power changes every turn, making playing this deck a lot of fun even if it’s not especially competitive.

The main Magnetic mechanic usually involves combining a bunch of robots into a single, nigh-invulnerable Voltron-like behemoth, then plowing through your enemy’s board. Attaching mechs to one another is fun, but can be risky if your opponent is prepared for the onslaught. It seems fair, especially since the combination can be cancelled out by silencing or destroying the main ‘bot to maintain card advantage.

The metagame is in an interesting place right now, and with six sets to choose from, there are lots of intriguing card combinations to experiment with. There will be one more expansion during this year of play, and then last year’s sets (Un’goro, Frozen Throne, and Kobolds) will rotate out sometime in 2019. 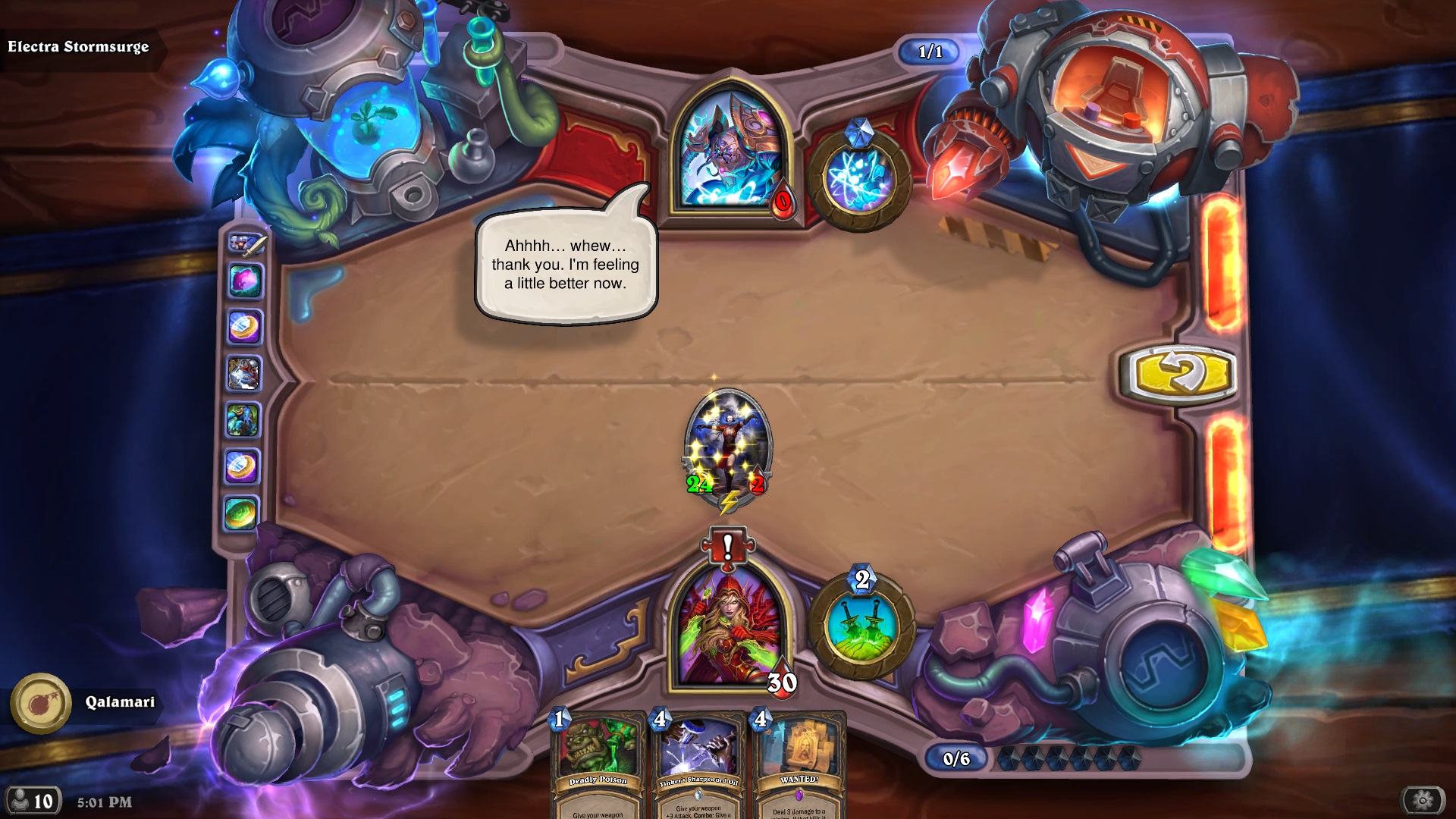 My main problem with Hearthstone was, is, and continues to be the cost associated with unlocking cards. If I want to build an IRL deck for Magic: The Gathering I can go to a comic shop and buy specific cards or trade with another player, but Hearthstone doesn’t allow either option. Cards can only be purchased in random packs, and it’s tough to play competitively without having access to the rarest and most powerful ones. The random nature of the card drops makes it hard to plan a deck without buying more packs, something I won’t do on general principle. There’s an oily film of pay-to-win surrounding the game, particularly if you want to play ranked matches.

To be fair, Blizzard did offer a couple of events between The Witchwood and The Boomsday Project to help mitigate the cost of buying packs. Free packs are offered occasionally, and everyone receives some during the promotional period for each new expansion. The Fire Festival in July offered double gold for quest rewards, and an earlier event granted arcane dust in addition to gold, allowing for easier crafting. But Hearthstone still feels stingy when compared to other online CCGs, and the Boomsday mega bundle’s preorder bonus of a cosmetic hero replacement was far less generous than Witchwood‘s bonus packs. 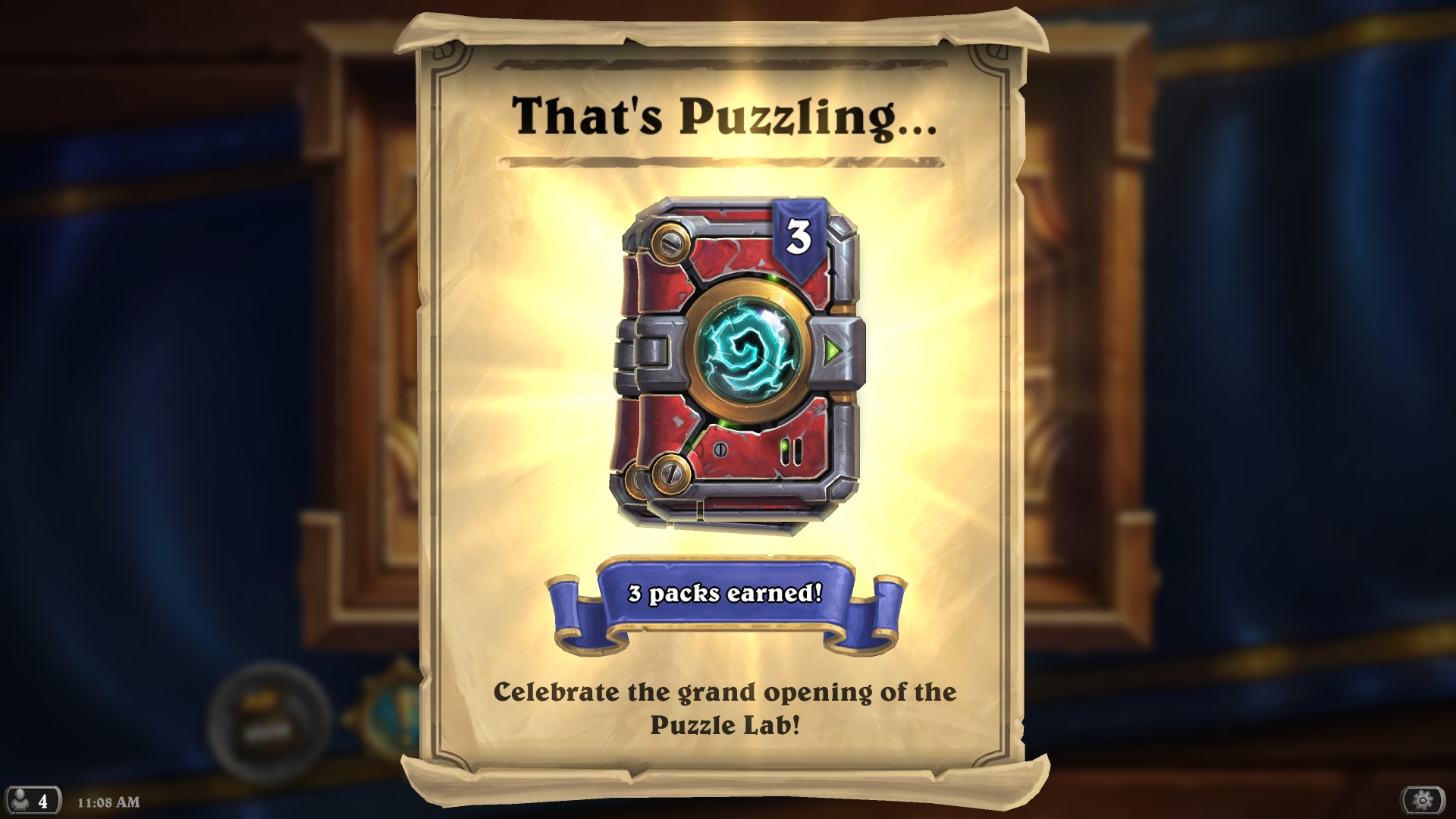 One other issue I ran into was the increased file size associated with this expansion. It may have to do with the age of my smartphone, but Hearthstone‘s file size has reached a point where it’s crowding out a lot of my other apps, and the performance has started to suffer. I can’t really play ranked games on my phone anymore because the processor is having trouble keeping up with all the card interactions and I end up losing more than half my turn time to input lag. It may be time for Blizzard to release a lighter weight version of Hearthstone specifically for mobile devices, something with fewer backgrounds and lower-resolution card art.

The Boomsday Project managed to fix some of the problems I had with ranked play by shifting the metagame away from plodding, delay-heavy decks, but the single-player content is a bit of a letdown after the excellent modes included in Kobolds and Catacombs and The Witchwood. It’s hard to complain about new free stuff in a game I still enjoy, but I’m hopeful the last expansion for the Year of the Raven will have a better single-player mode.

[This review is based on a retail build of the free-to-play game, with content purchased by the reviewer.]