Blizzard is doing a great job of keeping Hearthstone players invested. In addition to the typical daily quest, weekly Tavern Brawl, and Arena schemes invented to reward people with new decks on a constant basis, it has also delivered some wonderful single-player adventures.

Curse of Naxxramas and Blackrock Mountain were not only ingenious ways to provide guaranteed cards to the playerbase, but they were actually really fun homages to classic Warcraft lore. The League of Explorers is more of the same, and I’m okay with that. 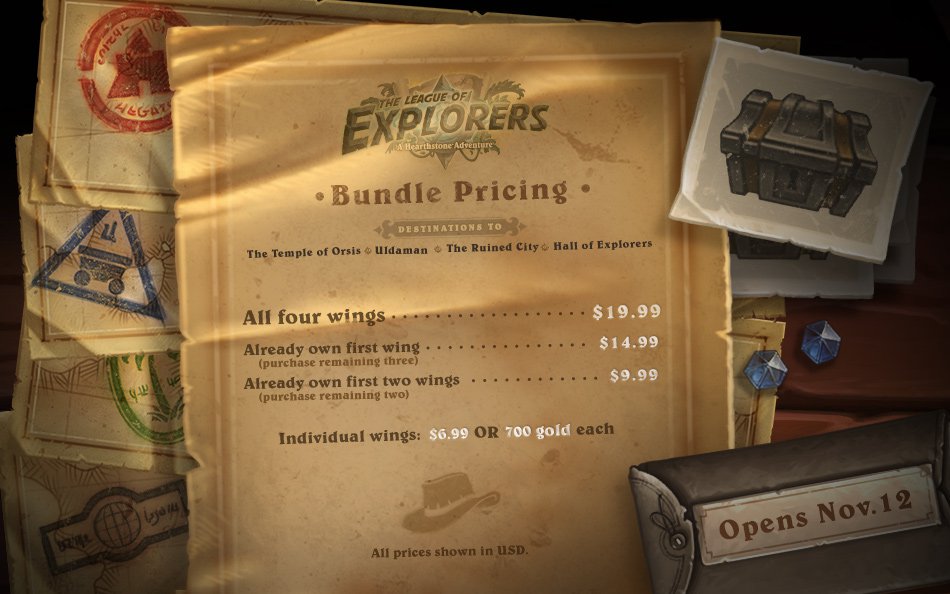 The basic setup has been pared down a bit, and I’m mostly fine with it. Instead of focusing on five wings, League has four, strewn about over the course of four weeks (skipping an additional week for the Thanksgiving holiday). It’s maddening sometimes to have to wait to access another wing that you paid for, but that’s mostly because Hearthstone constantly leaves me wanting more.

This expansion really delivers with its single-player scenarios, topping any other fight before it. That’s primarily due to the “choose your own adventure” sections, where players will have to deal with an event rather than face a specific enemy. You’ll be able to play the odds by taking a high-risk, high-reward option or play it safe, and in the end, strategy usually wills out. Other fights involve mechanics like a staff that makes you invulnerable, and a boss that persistently fills your side with useless minions that explode over time.

From a lore perspective, there’s a decent amount of references here for fans, from a duel with Lady Naz’jar in the ruined city, to a showdown with Archaedas in Uldaman. I never thought Blizzard would one day make a card game and base it on the rich Warcraft world that it’s spent decades developing, but I’m glad it did. As for the other bits, Heroic (hard) versions are still in, and although Hero challenges are a little too easy and straightforward this time around, each one rewards you with one card, so they’re still worth playing.

The new cards are also rather disruptive, in a good way. The main characters (pictured above) drastically alter some decks, and a few even allow for completely new deck themes. My personal favorite is Sir Finley Mrrgglton (love that name), a 1-mana 1/3 card that allows players to swap their hero power. It’s such a tiny thing, but the ability to use hero powers interchangeably can alter the course of a match.

I’ve also been using the Summing Stone in a few of my decks, which summons a random minion based on the cost of any spell used while it’s active. Other cards like Tomb Spiders and Jeweled Scarabs “discover” new minions. Like the themes before it, the types of cards in League are cohesive, and fun to use. Murloc decks in general also got a huge buff, with “Anyfin can Happen” (a 10-mana card that summons seven dead Murlocs), and the Tinyfin (a 0-cost 1/1 card that essentially buffs other Murlocs).

Hearthstone: League of Explorers is probably my favorite expansion yet for the game. I feel like Blizzard iterates for every release, and I hope this isn’t the end of the adventures to come, as I vastly prefer them to card-only expansions. Maybe next time we’ll see even crazier mechanics, like the co-op fight that was only used once in a Tavern Brawl.